Antonio Conte’s start to life as Chelsea manager took a few weeks to build up momentum but it was certainly worth the wait. At one stage in October the Italian was the bookies favourite to be fired after defeats to Liverpool and Arsenal. However, as we head towards Christmas, his team are on an 11-game winning run and are six points clear at the top of the Premier League.

Chelsea, rightly so, aren’t content with this. The best clubs are always looking to improve. They are being linked with January moves for some of the world’s best players. Real Madrid’s James Rodriguez, Arsenal’s Alexis Sanchez and Hoffenheim’s Niklas Sule are all reportedly big money targets for the Stamford Bridge outfit. But over recent days various outlets have linked Conte and the recruitment team at Chelsea with moves of Bayern Munich’s Arturo Vidal and Paris Saint-Germain’s Marco Verratti.

While N’Golo Kante and Nemanja Matic are both excelling at the heart of the midfield there are question marks over the depth Chelsea have in that area. John Obi Mikel is set to leave in January and the club are reportedly prepared to listen to offers for Cesc Fabregas. This would leave just Ruben Loftus-Cheek and Nathaniel Chalobah as backup which isn’t a problem in the short-term but long-term, when Chelsea are back in Europe, their drop in quality would be telling.

With money being no object for Chelsea, they are in a luxurious position of being able to put together packages for either of Vidal or Verratti. If Chelsea matched the €150,000-per-week that Vidal reportedly earns and the €130,000-per-week Verratti takes home at PSG, they would still be earning less than Cesc Fabregas, Eden Hazard, Diego Costa, John Terry and Thibaut Courtois. So what it comes down to is suitability. Which of the midfielders is a better fit for Conte’s revolution?

An in depth look at what Verratti could bring to Chelsea can be found here. The centre-midfield area is key to the functionality of Conte’s team. The 343 system used means the midfielders are used in a box-to-box capacity. They need to impact the attack but not switch off defensively. Especially when the width comes back from the wing-backs meaning if the ball is turned over quickly there is a possibility of a counter attack and the pair have to basically plug that space. They have to be confident on the ball and comfortable when pressed. 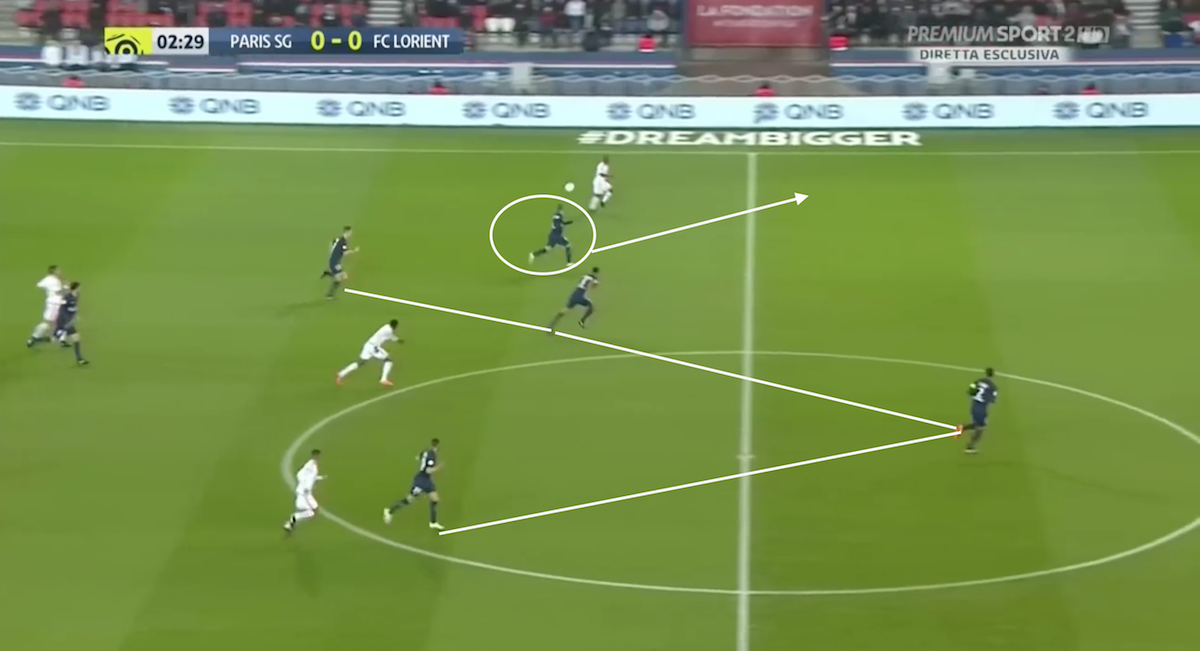 Verratti shows his covering depth in the above picture. The back four are linked by the white lines and FC Lorient are threatening to counter PSG after the home side had initially looked to build an attack. Verratti, circled in white, covers for the advanced right-back and stops the Lorient attack before it progresses. It’s part of his responsibilities at PSG so he would be able to transfer it to Chelsea and carry out those instructions. The diminutive midfielder is averaging 3.4 tackles and 0.9 interceptions per 90 minutes compared to Nemanja Matic’s 2 tackles and 1.6 interceptions. 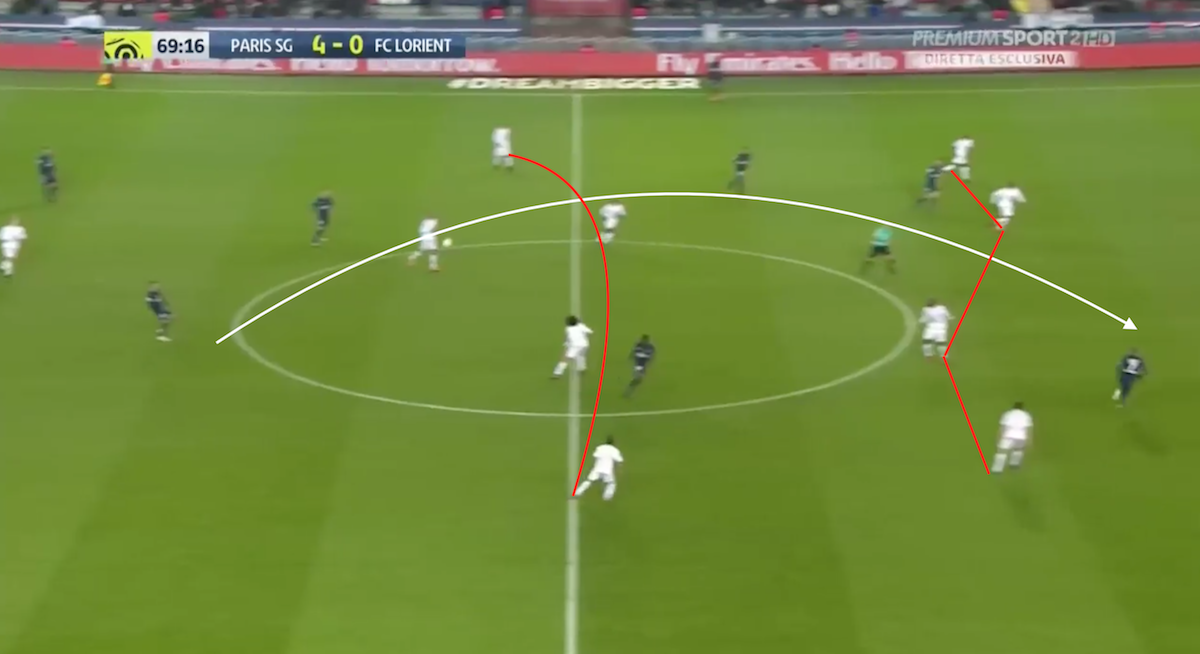 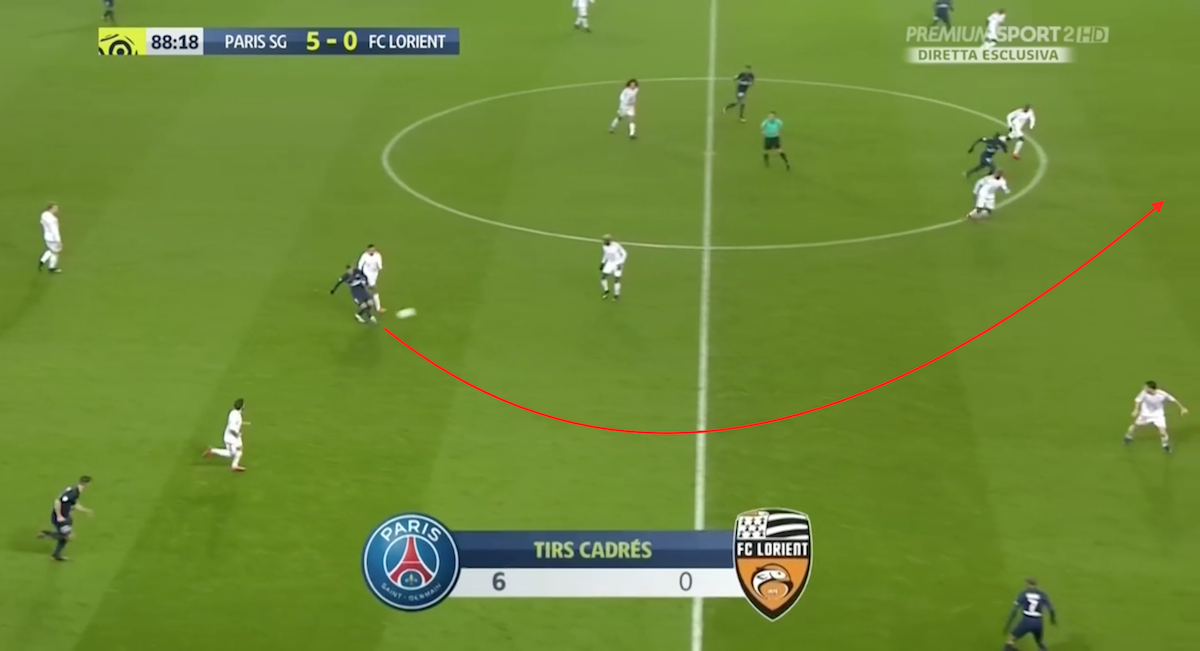 Chelsea, over recent weeks, have turned into a counter attacking team. They look to hit teams quickly and utilise the pace of Hazard, Costa and Pedro. In the above two pictures you see why Verratti would enhance this tactic for the team. He has the vision and the ability to execute passes which take out 6/7 players at a time and make the most of inevitable defensive lines (it’s a byproduct of Chelsea sitting deep, the opposition will push on to Chelsea instinctively). In the first picture above, Lorient are compact and they have nine men behind the ball. Yet one pass from Verratti’s right foot and PSG are in to score the fifth.

The 24-year-old Italian averages 89.6 passes in Ligue 1 and completes 88% of them whereas Matic attempts 59.6 passes and completes 88.1%. Their pass completion percentages are almost identical but Verratti is averaging 30 more passes than Matic but this has a lot to do with how the two teams set up.

Vidal played under Conte at Juventus but Chelsea have had no dealings with his agent before. Fernando Felicevich looks after the likes of Alexis Sanchez, Claudio Bravo, Gary Medel and Charles Aranguiz. The 29-year-old multifunctional midfielder has conquered Germany and Italy and according to recent reports has set his sights on England. Chelsea seems like the ideal destination as the system gets the best out of the midfielder and the manager knows him well. 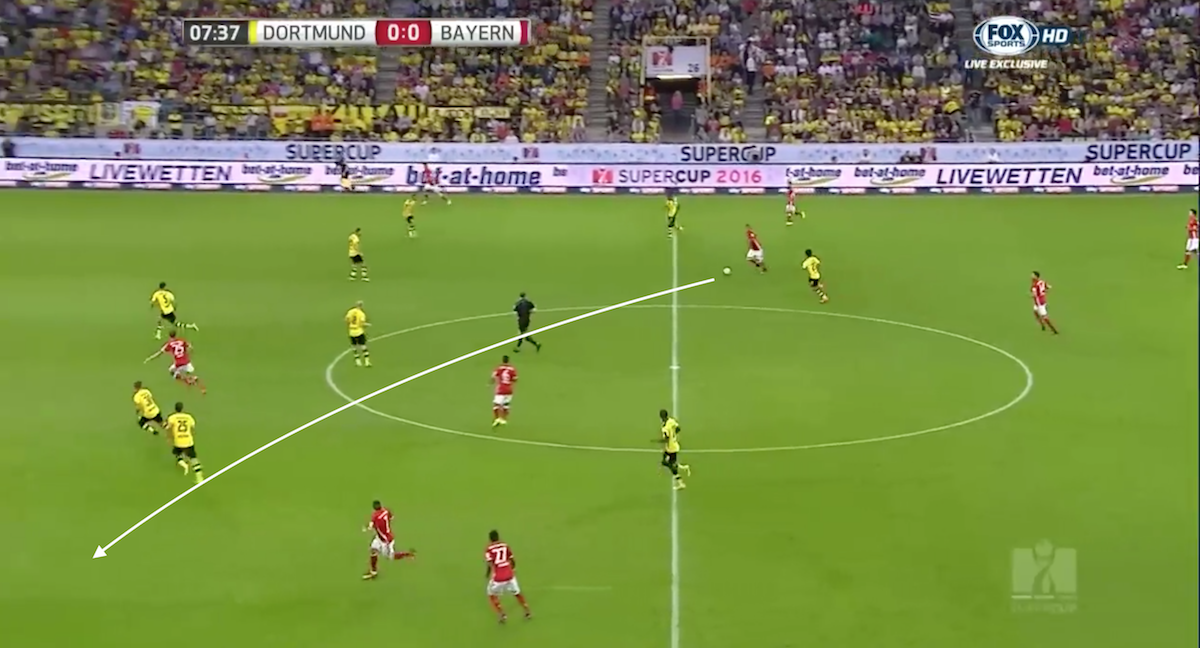 Vidal has the ability to stretch play from deep and start counter attacks. In the picture above, taken from the match against Dortmund, he switches play to Ribery on the right and this opens up the game for Bayern and results in a corner. He’s intelligent enough to know when to play long and when to play it short. 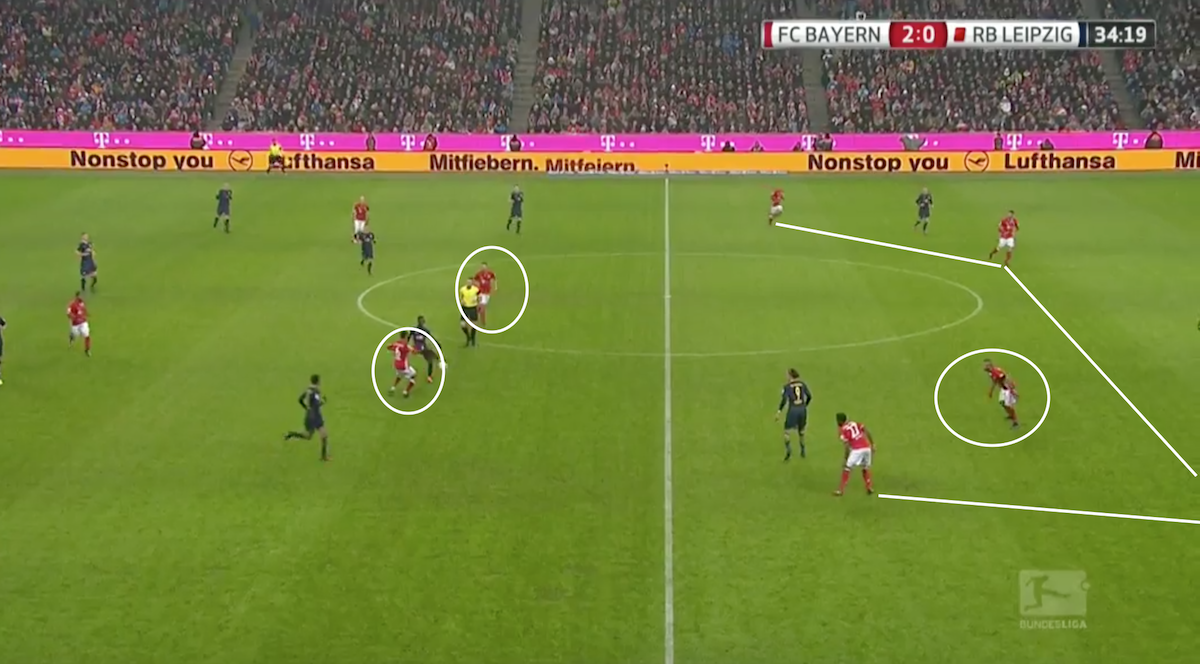 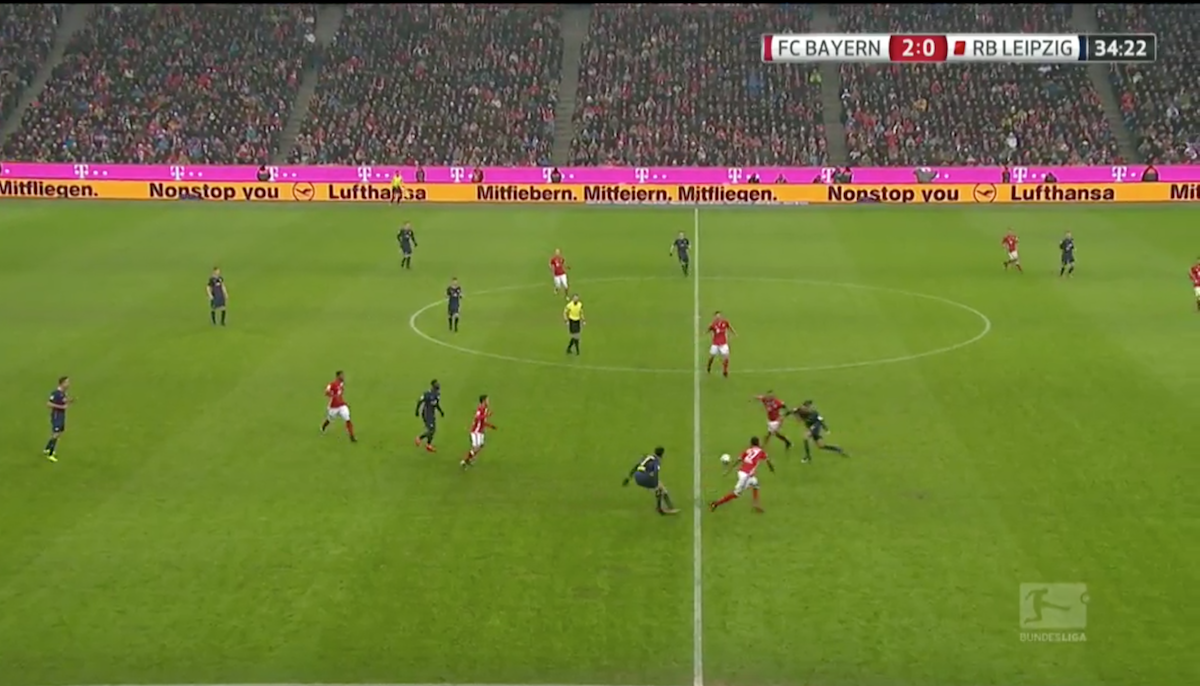 In the above two pictures you get to see his positional intelligence. He’s part of a three man midfield alongside Thiago and Xabi Alonso, and to the surprise of many it’s Vidal in the holding role and not Alonso. This may be down to the fact RB Leipzig are known for their pace in attack and Alonso wouldn’t be able to keep up. Vidal positions himself to cover either at centre-back (if Hummels has to push over to left-back with Alaba advanced) or at left-back if play advances that way. Leipzig instead play the ball to feet and Vidal is quick enough to regain possession centrally and get Bayern on the attack. 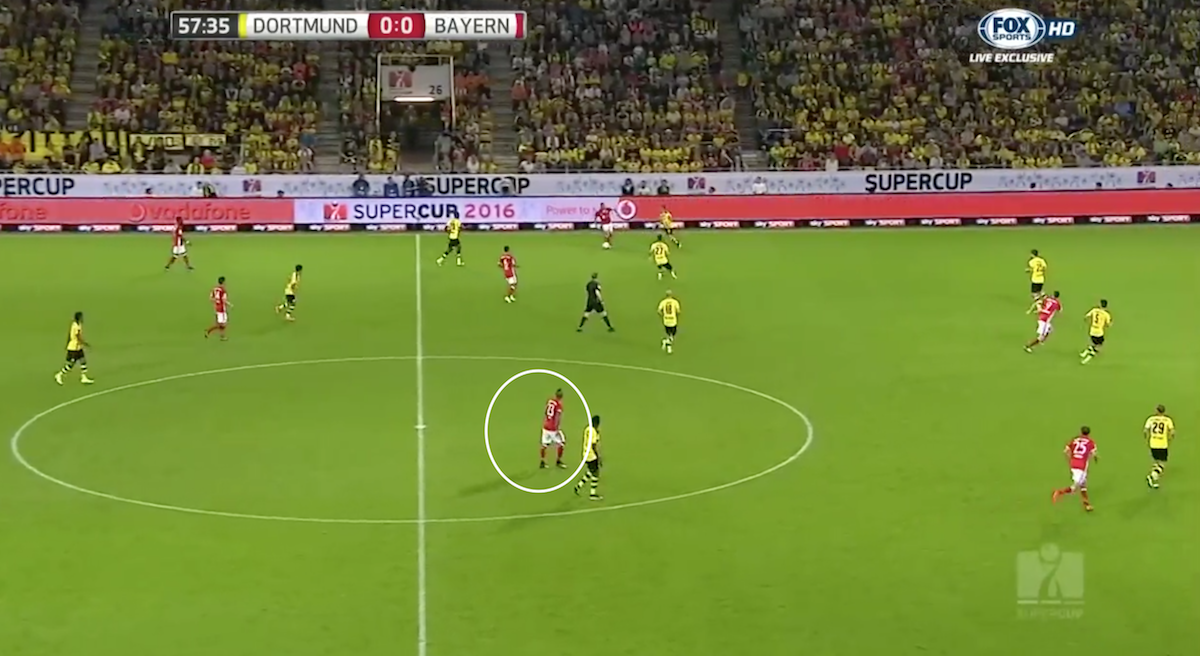 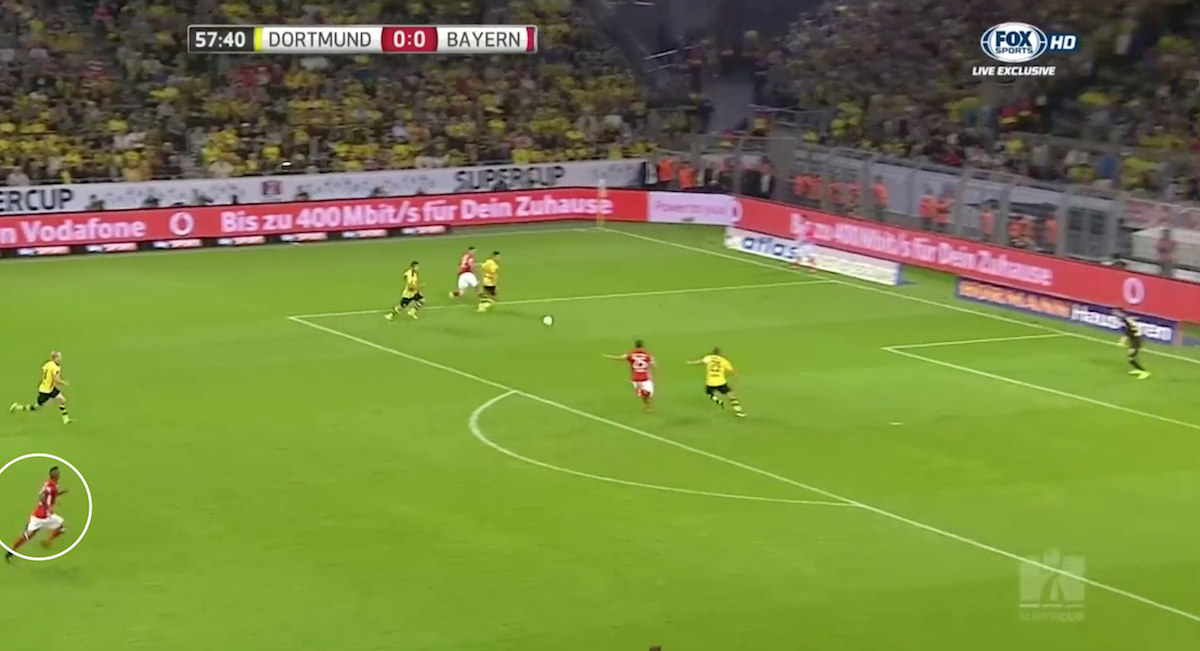 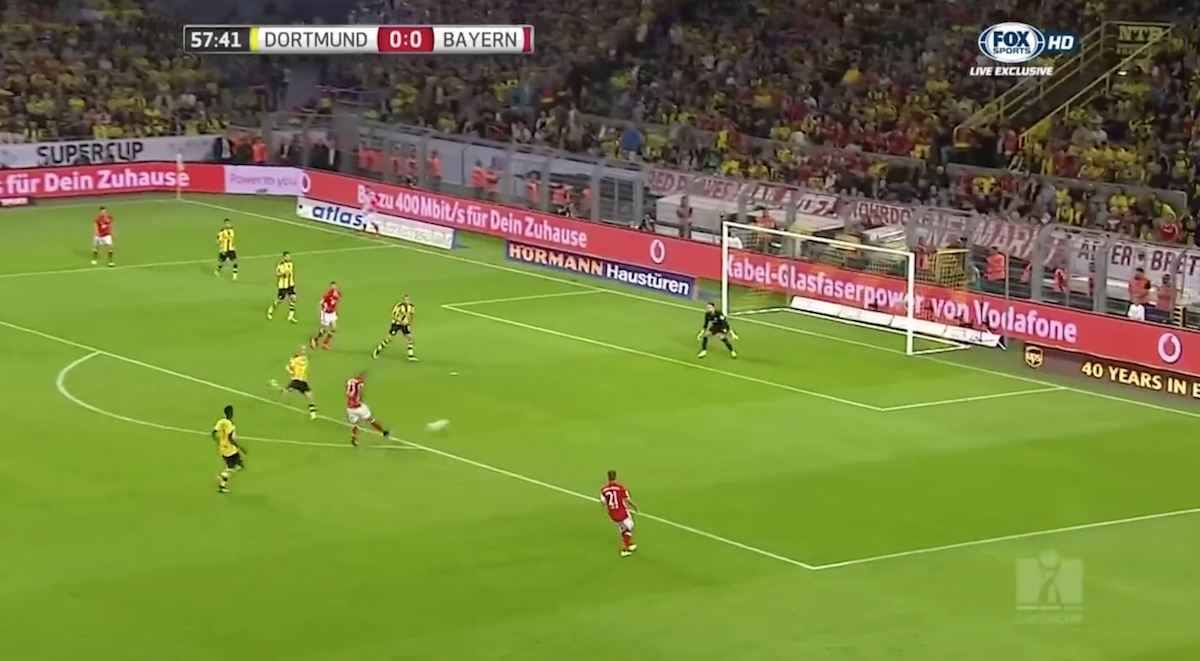 The above three pictures shows what separates Vidal from Verratti. The Chilean is a goal threat whereas Verratti is more of a creator. In the first picture you can see him circled in the middle of the pitch but as play progresses he makes up a lot of ground to support the attack. He fires in the shot, which is initially saved, before tucking home the rebound. Verratti has 4 goals in 115 matches compared to Vidal’s 5 in 44 for Bayern Munich.

Both players have an abundance of quality. Both would not just fit the Chelsea midfield, they’d enhance it and that’s a scary thought for rivals looking on. What it comes down to his preference. Will Conte want someone to conduct the orchestra or does he want a bit of a jack of all trades type midfielder in Vidal? Is this a short-term investment or one for the next decade?