Lille unleashed Eden Hazard onto the world. They helped develop Nicolas Pépé and it was while with Les Dogues that Rafael Leão started to deliver on the hype surrounding him. When it comes to developing young, attacking talent, the Ligue 1 side know what they’re doing.

Despite losing Leão and Pépé in the summer, Lille have started the 2019/20 campaign well. Currently, in third position and just four points behind Marseille, Christophe Galtier’s men are impressing once again. The feeling was this would be a transitional season for the club after a busy summer transfer window. But nine wins from 18 matches suggests otherwise.

And the star of the show happens to be one of the players signed to fill the void in the attack: Victor Osimhen.

The Lille No.7 has notched nine times in the French top-flight and he scored twice in the Champions League. He’s also chipped in with three assists to take his total goal involvement tally to 15 from 20 starts.

According to Sky Sports, a host of Premier League clubs are keeping tabs on the Nigeria international. Liverpool, Chelsea and Tottenham Hotspur are all rumoured to be interested in the forward.

Osimhen’s rise to the top has been remarkable.

The 20-year-old signed for around £11million from RSC Charleroi just a month after making his switch to the Belgian club permanent. The Nigeria international spent the previous campaign on loan and netted 20 goals. It was enough to convince Charleroi to sanction the £3million deal.

Lille acted quickly to land Osimhen, much to the delight of manager Christophe Galtier.

“He was our priority at centre-forward. He’s 20 and full of energy. He can play in behind or be present in the penalty area when we’re playing in front of low blocks. He has a profile that we no longer had.”

Injuries robbed him of an opportunity with Bundesliga side Wolfsburg. Knee ligament problems prevented him from making his debut for the Germans for four months.

His season was then cut short after he suffered a dislocated shoulder. Then, during the summer of 2018, Osimhen contracted malaria and was forced to miss pre-season.

He had trials with Zulte Waregem and Club Brugge as he looked to secure a loan move but his physical state saw both clubs pass on the opportunity. Charleroi, however, saw his potential and took the risk. The rest, as they say, is history. 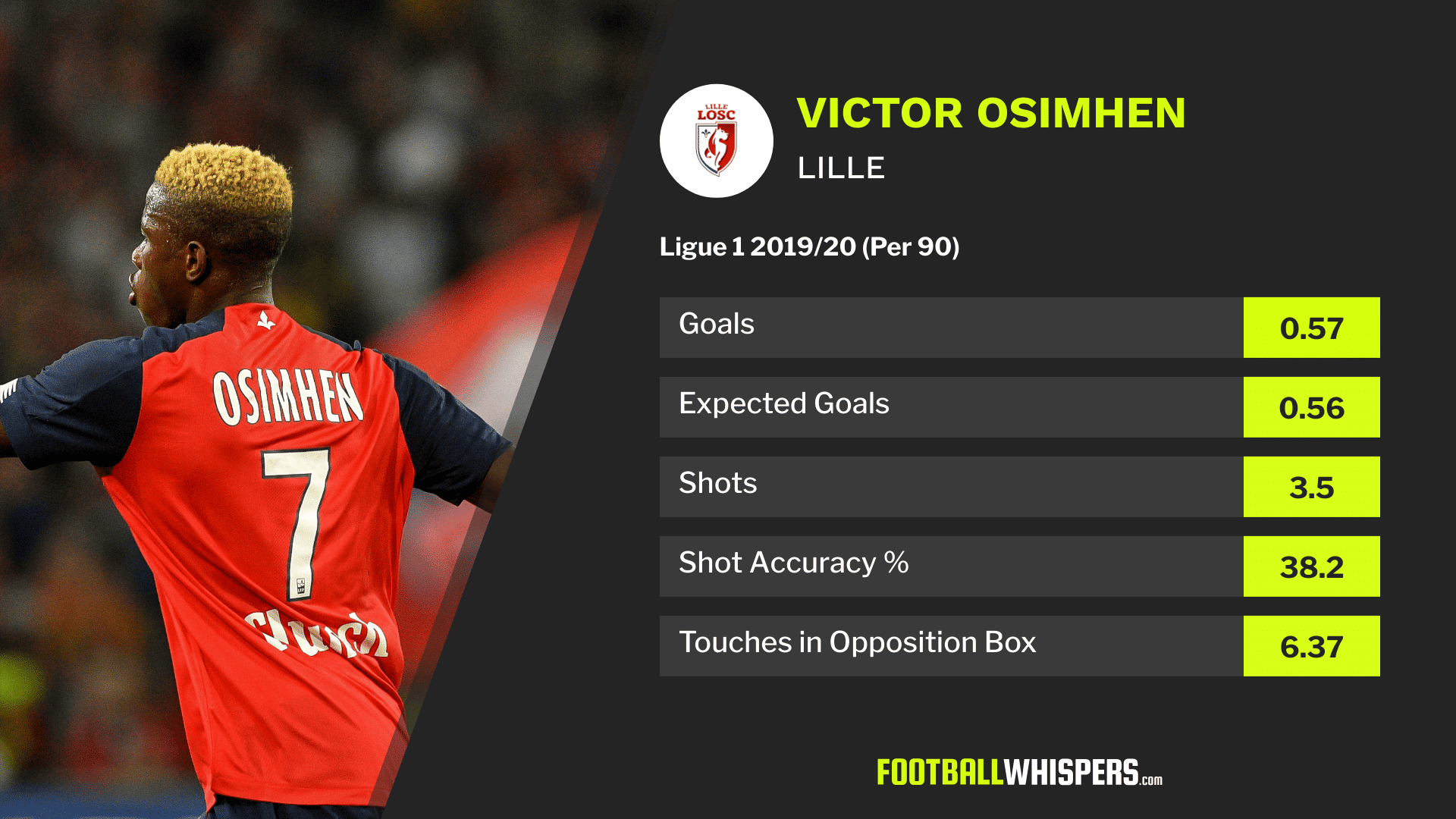 After so many setbacks, he’s finally able to show the world what he’s all about. And it’s safe to say teams like what they’re seeing.

The most interesting point about his season is Osimhen isn’t running hot. Some players have momentum on their side and this results in goals. But it isn’t sustainable. However, all of the Lille forward’s underlying numbers suggest his current output can go on. Not only that, there’s room for improvement.

He’s currently averaging 0.57 goals from an expected goals (xG) return of 0.56. However, elite forwards tend to outperform this metric meaning Osimhen, so long as he maintains these averages, could well improve his actual output down the line.

The 20-year-old is averaging 3.5 shots per 90. On one hand, this shows he relies on volume to be at his effective best. That can be portrayed as a negative because he’s not clinical.

However, the fact he’s getting so many shots per game shows his intelligence and his desire to get into good, dangerous areas. The very best in the world work on averages like this, with the likes of Mohamed Salah, Harry Kane and Lionel Messi all averaging in excess of four shots per 90.

Osimhen is landing close to 40 per cent of his efforts on target while also managing 6.37 touches in the opposition box. The latter stat is telling. Reliable goalscorers tend to have a high number of touches in the penalty area. It also highlights their composure. Last season, Pépé was averaging just 4.5 touches in the box which hinted at him being a counter-attacking forward, one who relied on space. The Lille No.7, however, doesn’t need perfect conditions to be at his effective best.

Making a move for the forward in January would be premature but if his form continues for the entire season top tier clubs will be entertaining the thought of making Osimhen the latest big-money Lille export.