With two of the biggest transfer sagas of the summer involving Lille, it’s little surprise the incomings at the Stade Pierre-Mauroy went under the radar.

All three played a pivotal role in Lille stunning Ligue 1 last season to claim second spot. From the outside looking in, it appeared as though their squad had been dismantled and chances of a repeat seemed slim at best.

The French side replaced these key, match-winning players with unproven individuals at such a level.

Another name on the arrivals list was Victor Osimhen.

The 20-year-old signed for around £11million from RSC Charleroi just a month after making his switch to the Belgian club permanent. The Nigeria international spent the previous campaign on loan and netted 20 goals. It was enough to convince Charleroi to sanction the £3million deal.

Lille acted quickly to land Osimhen, much to the delight of manager Christophe Galtier.

“He was our priority at centre-forward. He’s 20 and full of energy. He can play in behind or be present in the penalty area when we’re playing in front of low blocks. He has a profile that we no longer had.” 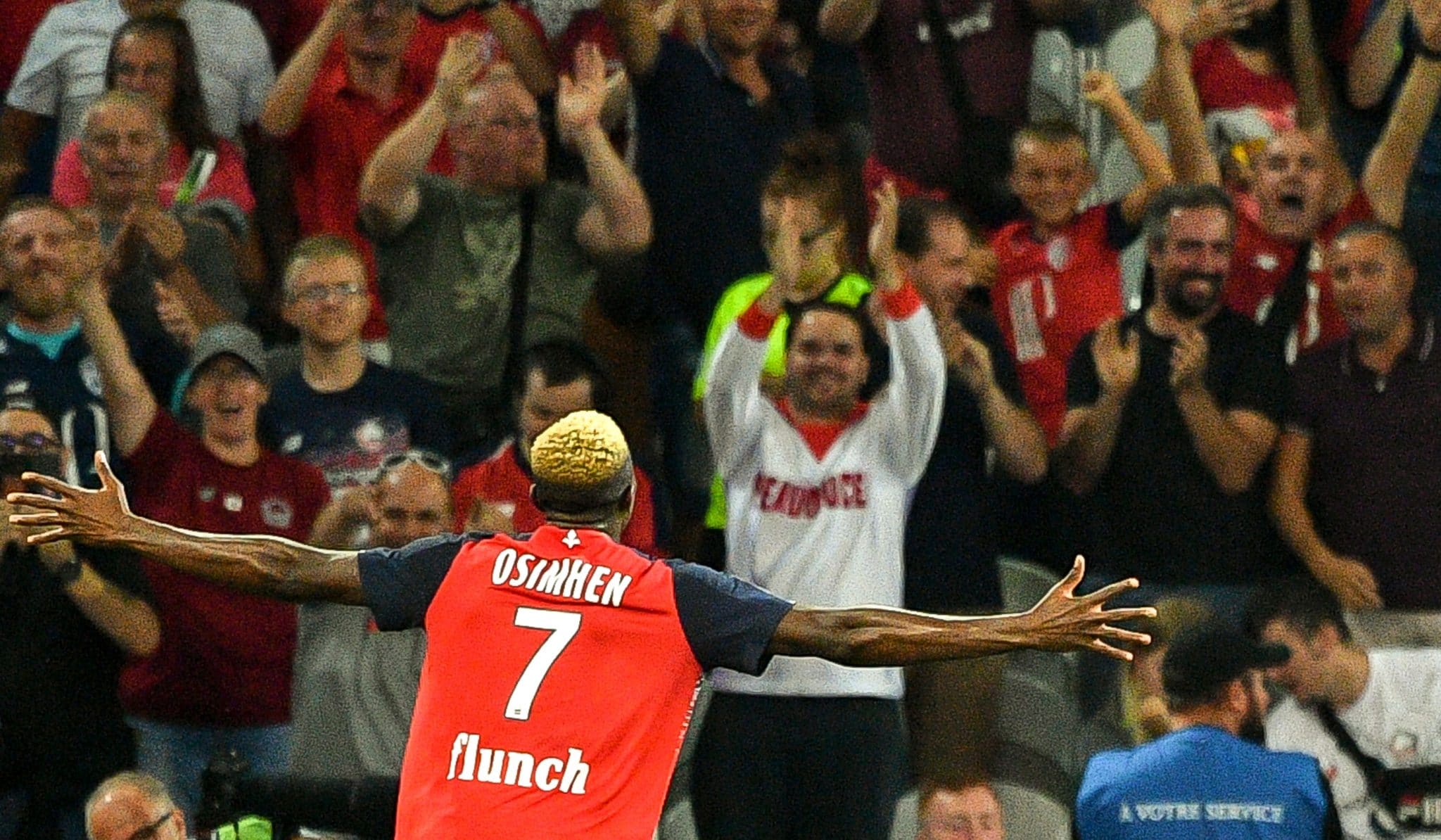 The move to the French side is the latest chapter in Osimhen’s remarkable career. Despite his young age, he’s already been through a lot.

Injuries robbed him of an opportunity with Bundesliga side Wolfsburg. Knee ligament problems prevented him from making his debut for the German’s for four months.

His season was then cut short after he suffered a dislocated shoulder. Then, during the summer of 2018, Osimhen contracted malaria and was forced to miss pre-season.

He had trials with Zulte Waregem and Club Brugge as he looked to secure a loan move but his physical state saw both clubs pass on the opportunity. Charleroi, however, saw his potential and took the risk. The rest, as they say, is history.

The Ligue 1 campaign may only been three weeks old but the Lille No.7 has four goals in three matches. Last season’s runners-up have claimed six points – the same number as Paris Saint-Germain.

Osimhen has been responsible for 80 per cent of the goals scored by Galtier’s men and with the team adapting to his strengths, that figure is likely to remain high throughout the campaign.

It would be easy to look at the 20-year-old and think he has been brought in to replace Pépé's goals. But in terms of profile, he couldn’t be further away from the new Arsenal signing. In that respect, he is an upgrade on Leão. 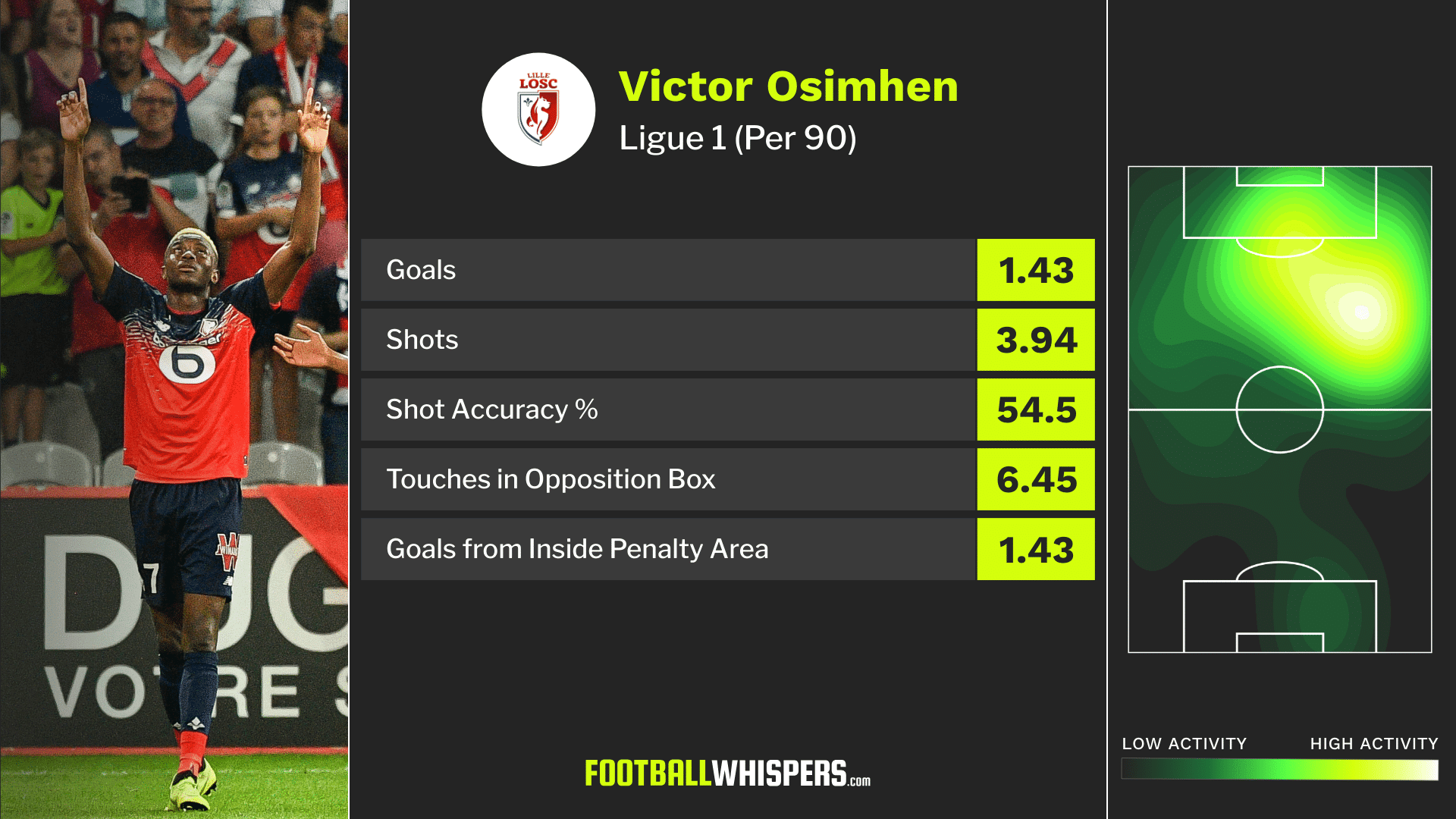 Osimhen’s return of 1.43 goals per 90 isn’t sustainable but he’s managed to get off to such a prolific start for Lille because of his movement in and around the penalty area.

A sharp-shooter, the Nigerian is landing over 50 per cent of his 3.94 shots per 90 on target. Not only is his accuracy impressive but the sheer volume of shots he’s having is remarkable.

Galtier’s men do not dominate possession – 50 per cent in their opening three games – and they’re also coming up against sides who sit a little deeper after Lille's displays last season. Yet Osimhen is averaging more shots per 90 than Pépé registered.

The scary thing for rival teams is that Osimhen isn't yet fully integrated into the side. And although the 20-year-old is outperforming his underlying numbers, this shouldn't be as much of an issue when he and his team-mates are on the same page.

For example, the ball is being worked into the area a lot quicker and this pairs well with Osimhen's intelligent movement in the box. He's already displayed this season that all he needs his half a chance to find the back of the net. His post-shot expected goals average highlights he's adding value to his efforts, it's 0.14 up on his expected goals average.

In Osimhen, Lille have a special talent. A match-winning, game-changing forward who is only going to get better. Fans at the Stade Pierre Mauroy will soon forget all about Pépé and Leão.