Now that Roy Hodgson has received the Freedom of Croydon, he can turn his attention to Crystal Palace's summer business.

After the catastrophically brief tenure of Frank de Boer, Hodgson came in and steadied the Selhurst Park ship, overseeing a remarkable transformation which saw the Eagles eventually finish 11th.

Mid-season managerial changes don't always work out, as proven this year by Alan Pardew, Carlos Carvalhal, Sam Allardyce and David Moyes (even though the last two restored a sense of stability to Everton and West Ham United respectively).

But Hodgson has been the thrilling exception, using all the know-how and nous accrued over 40 years in management to haul Palace from the wreckage left by De Boer and make them worth watching again.

Hodgson now has a transfer window with which he can shape the squad in his vision. It's set to be a busy summer at the club, too, with the futures of Yohan Cabaye, Joel Ward and Bakary Sako yet to be decided.

And while there will be departures, Hodgson is targeting proven Premier League talent capable of elevating the team to a point where they can challenge for European football like Burnley.

Like Michail Antonio, who Palace have reportedly moved for.

Antonio is quite the catch. Powerful, pacey and wonderfully versatile, the 28-year-old has established himself as a key figure at West Ham since Slaven Bilić signed him from Nottingham Forest in 2015.

Antonio's season has been ravaged by injury but there is compelling evidence that, when fit, he is one of the Premier League's most exciting players. Two seasons ago, Antonio shot to prominence when he scored nine goals for the Hammers despite often being deployed at right-back.

The former non-leaguer matched that with another nine goals last season but missed a hefty portion of West Ham's season this year through injury. Damaged ribs ruled him out for a month in November before a calf strain caused him to miss West Ham's entire festive fixture programme.

He completed 90 minutes just twice after returning in February before his season ended with him leaving the London Stadium pitch in tears after tweaking his hamstring.

So, while Antonio may be a formidable attacking force, his persistent fitness issues will certainly be reviewed before any contract is signed.

How he stacks up to Palace's current options

But, when fit, Antonio has proven himself to be a robust weapon in attack. The winger flourished under Bilić and his direct and powerful running quickly became a staple of the Hammers' play following his move from Forest.

Indeed, Antonio ranks fifth in the league in successful take-ons with 3.44 per 90, an improvement on the 2.76 he managed last season.

Yet, while his running would be an asset from full-back, Hodgson is most likely attracted to Antonio's attacking credentials. The Palace manager didn't call Antonio up to the England squad during his time in charge but has clearly been impressed with the midfielder's progress since, particularly how he has influenced games in the final third.

Palace generally play with a target man. This season, that has been Christian Benteke but it became clear in the final weeks of the season that Hodgson's patience with the misfiring Belgian has run out as the coach switched to a 4-4-2 formation which paired Wilfried Zaha and Andros Townsend up front.

That meant playing James McArthur and Ruben Loftus-Cheek, two central midfielders, out wide. The logic behind their interest in Antonio is that he is a natural wide man and a player who could offer stiff competition to their current attacking pack.

Hodgson would ideally like to have Zaha and Townsend out wide supporting a frontman or bring in a player who could partner Zaha up top with Townsend being moved back to the wing. 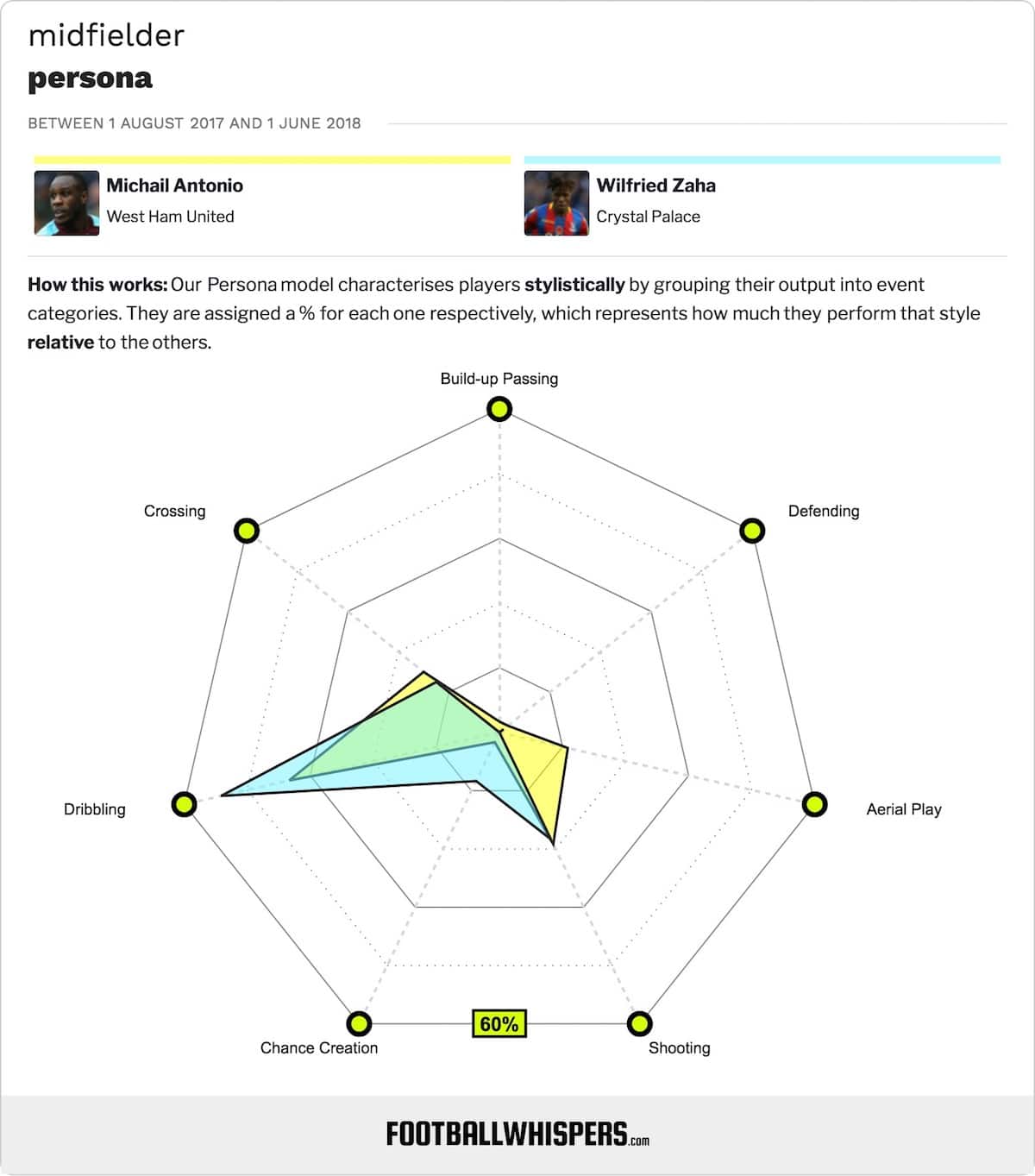 Antonio's stats support the idea that he would be a valuable addition to the Eagles squad. His 0.19 goals per game ratio is higher than Benteke's while he boasts a better shooting and passing accuracy.

Antonio's goals-xG ratio is an impressive 0.99 but Benteke's 0.2 reflects the former Liverpool striker's woes in front of goal this season. At 6ft 3in tall, Benteke understandably wins more aerial duels (9.74) but Antonio has illustrated his aerial prowess in the past, notably when he scored eight headed goals for the Irons during the 2015/16 campaign.

Townsend is more creative than Antonio. The former Tottenham Hotspur winger averages more open play key passes and big chances created and his 78 per cent passiong accuracy is considerably higher than Antonio's 66 per cent. However, with just five goals in 79 games for the Eagles, Townsend does not offer enough in the goals department whereas Antonio, with 21 in 90 for the Irons, does.

It's unsurprising that Zaha's numbers are vastly superior. The 25-year-old has enjoyed an outstanding campaign for Palace, boasting a post-shot xG of 9.79, a shot placement ratio of 1.07 and a mightily impressive average of 4.19 successful take-ons per game.

Then again, Palace wouldn't be expecting Antonio to emulate Zaha's exhilarating displays this season. Instead, the hope is that he could come in and ease some of the extra pressure that has been lumped on Zaha due to Benteke's wretched form.

Inevitably, fears over Antonio's persistent injury troubles are going to be a decisive factor. When fit, he is a versatile and dynamic presence, a player who can defend, attack, press high and finish. Comfortable operating anywhere on the right or centrally in attack, Antonio has plenty to offer Palace. Contracted to the Hammers until 2021 and likely to come with a price-tag around £15million, it remains to be seen if the deal comes to fruition.