The last three times these sides have met LDU Quito have run out winners. If they can do the same again then Velez Sarsfield will have their work cut out to qualify for the next round. Who will take the three points this time? Find out with our Velez Sarsfield vs LDU Quito match preview with free tips, predictions and odds mentioned along the way.

LDU Quito might have run out winners in the reverse fixture just a couple of weeks ago but the game was a lot closer than the 3-1 scoreline suggests with goal attempts at a similar level and Velez Sarsfield having much more possession. It's true, control of the ball doesn't win you games of football but this time around Velez Sarsfield will have home advantage and arrive in the match in better form than their Ecuadorian opponents. LDU Quito had been on an impressive run but have suffered back-to-back defeats in their last two matches whilst Velez Sarsfield have recorded three consecutive wins since LDU Quito beat them.

Our first prediction has already touched on the 3-1 result from the last meeting between Velez Sarsfield and LDU Quito and we anticipate more of the same. For one thing, LDU Quito have seen each of their last six matches finish with at least three goals in them whilst Velez Sarsfield have exceeded the benchmark in three of their previous five. The specifics of their last head-to-head offer some insight as to the sort of game we'll see too with both sides having plenty of chances with a combined 29 shots being taken. It means the keepers will likely be busy.

We should start this prediction of by making it clear that Ricardo Centurion isn't nailed on to score; the Velez Sarsfield man only has three goals to his name in 13 appearances so far this season. Now, here is where the tip comes in; those three goals have all come in his last three games making him the in-form man. He's yet to start in the Copa Libertadores but a brace against Gimnasia a couple of days ago is likely to see him get the nod. If he plays, he'll be confident of adding to his goal tally.

As things stand Velez Sarsfield are one point behind LDU Quito with three games to go. A win for the home side would put them in the driving seat to take the final qualification spot, however, a LDU Quito win would put four points between the sides with two games left making it a big ask of Verez Sarsfield to make it to the next stage. It means the match has a lot riding on it and therefore it is one you won't want to miss. 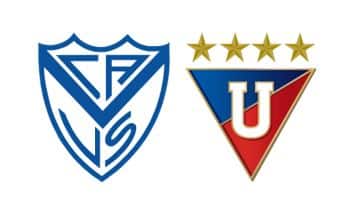