As Premier League teams gear up for the January transfer window, they will no doubt be looking for ways to avoid paying over the odds in what can be a frenzied time period. With just one month to get deals done, there is a tendency for paying eye-watering fees simple to fill temporary vacancies in the squad by whatever means necessary.

However, there are ways to avoid excessive spending in mid-season. One is to look abroad, to untapped leagues where talent comes at a slightly smaller price than in the English top flight. Another is to look down and see the quality on offer in the Championship and beyond.

Josh Vela is one player who seems to be interesting those above. He has starred for Bolton Wanderers during what has been an extremely difficult season, leading to rumours linking him with Brighton and Hove Albion, Leeds United, Derby County and Sheffield Wednesday.

The 23-year-old, having recovered from an ankle injury that kept him out for ten league games between August and September, has played a key role in helping his side out of the three-team relegation zone to 21st place and could be rewarded with a move to a club with greater ambitions than simply avoiding the dreaded drop.

Is Vela Premier League material? Here, we at Football Whispers analyse his strengths and weakness, consider his statistics, determine his potential cost and assess whether he has what it takes to make the step up.

WHO IS JOSH VELA?

Born in Salford, Vela came through the Bolton youth academy and made his debut at first-team level in 2011/12, while the club was still in the Premier League. At the age of just 18, he was viewed as one of the most promising young players in the country, with Liverpool having a £1million offer for him rejected.

Timing and luck played a part in keeping out of the starting line-up in his teenage years, however. He broke through at a difficult time in his club’s recent history, where relegation loomed and, ultimately, transpired. He also suffered several long-term injuries that meant he was unable to consistently compete for a regular berth.

Bolton’s demotion to the Championship didn’t coincide with more game time for Vela, though, as he continued to struggle with injuries and was loaned out to Notts County in the third tier. It took the arrival of Neil Lennon as manager for him to make his mark on the first team.

Starting often as a right-back, the 2014/15 campaign saw him make over 30 appearances in all competitions. He followed this up the following season with a further 35 outings, cementing his status within the team. Then, upon the club’s relegation to League One, he became even more integral.

In 2016/17 he scored broke into double figures for goals scored for the first time in his career, aiding Bolton to automatic promotion back into the Championship. By this point, he has asserted himself on a more advanced position in midfield, something he has continued in this term when fit.

WHAT ARE VELA’S STRENGTHS AND WEAKNESSES?

Bolton manager Phil Parkinson tends to prefer a 4-2-3-1 system and, within that shape, Vela often acts as the support to lone striker Gary Madine. Operating in a team that has averaged the least possession in the Championship with just 42.6 per cent, the 23-year-old has had to show his industry.

While nominally he is a No.10, Vela acts essentially as more of a box-to-box player. Tactically, he is what Frank Lampard and Steven Gerrard grew to be over the course of their illustrious careers – a physically strong, decent ball-player who prefers having the freedom to bomb forward to the restrictions of a deeper role.

Vela covers ground fairly quickly and has the energy to get up and down the pitch for 90 minutes. This is a trait that would particularly suit teams looking to play a high-tempo possession game with emphasis on getting into attacking areas at speed. However, one weakness is that he appears to lack the nuanced movement at times needed to create viable passing lanes for team-mates to find him with.

On the ball, there is no shortage of quality. He links up well with those around him, helping Bolton circulate possession, and is an incisive passer. He also delivers accurate crosses, which is why he takes most of his team’s corners and free kicks, while he is not afraid to get back and offer support defensively. 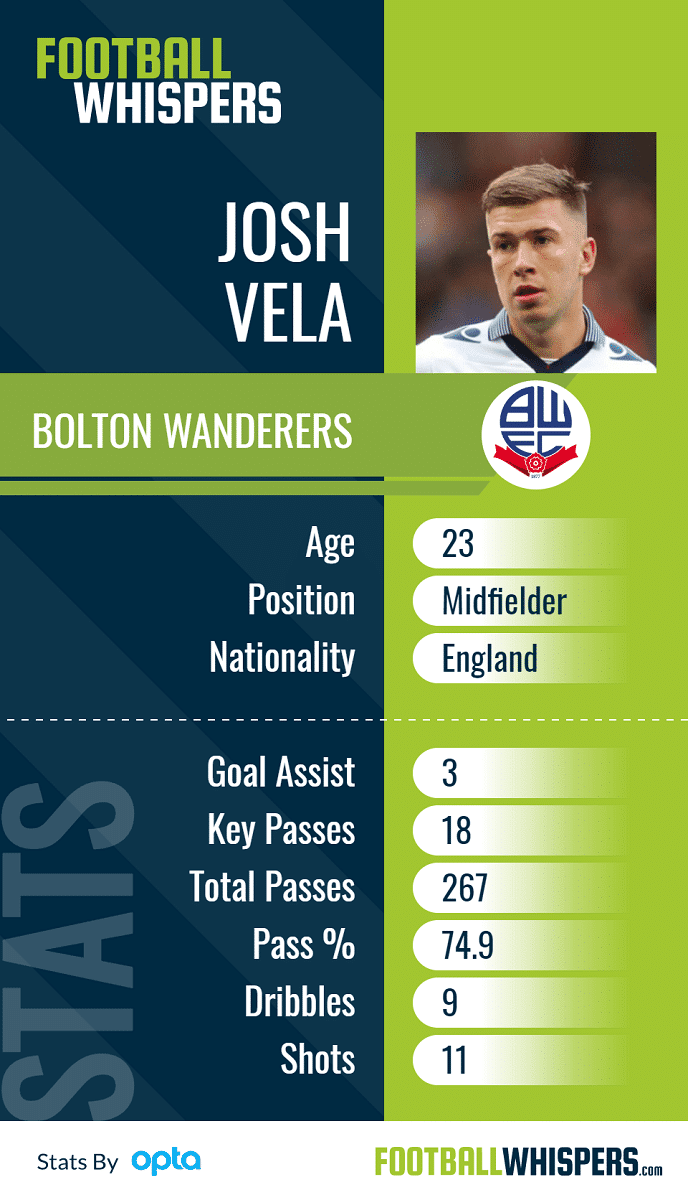 Vela, who came through at Bolton at around the same time as current Arsenal centre-back Rob Holding and Nottingham Forest forward Zach Clough, is an increasingly creative presence.

Considering Bolton are in a relegation dogfight, they are going to do all they can to keep hold of their best players, of which Vela is one.

Parkinson commented on this recently, saying: “We really can’t afford to weaken this squad at this stage and in January awe have to make sure that, of all the teams in that bottom group, we come out of January in better shape than when we started it.”

With that in mind, should the likes of Brighton and Leeds decide to swoop for the 23-year-old midfielder, they should be prepared to part with serious cash.

However, it’s worth noting that, over the last five years, the highest fees Bolton have received for any players were £2.7million for Holding and £2.6million for Clough.

It’s also important to note that Vela’s contract is up in 2019, meaning he would be free to discuss a potential free transfer come this time next year. His current club will want to avoid losing him for nothing, so may be more open to offers in January as a result.

Should Brighton and Leeds submit bids of over £3million, Bolton would be forced to think about selling. And, should the interested parties win out, they would be signing a versatile and dynamic young midfielder in Vela.