Vedat Muriqi’s rise in 2019 has been meteoric.

A 17-goal showing for Çaykur Rizespor in the Turkish Süper Lig convinced Fenerbahçe to make him their first-choice striker this summer in a deal worth around the £3million mark.

Life at the Şükrü Saracoğlu Stadium has started well – the 25-year-old already has two goals to his name from four starts. He’s also managed to carry his club form over onto the international stage, netting in his last three appearances for Kosovo, including the third goal in the defeat to England.

And now a number of clubs are keeping tabs on the 6ft 4ins forward. Turkish publication Sabah claim Manchester United and Tottenham Hotspur are considering the Fenerbahçe No.94 as a potential addition to their respective squads when the transfer window opens again in January.

Though a potential fee is not mentioned it's likely the Sarı Lacivertliler would demand significantly more than they parted with to sign Muriqi.

But is he a flash in the pan? Simply a striker in a good vein of form or is this the emergence of one of Europe’s next great strikers?

According to Max Kruse, Muriqi’s team-mate, it’s very much the latter: “I compare him to [Robert] Lewandowski. I think he will be at Bayern’s level in two-three seasons.”

However, as seen with Cenk Tosun, the step up from Süper Lig to the Premier League is significant. Here, we take a look at Muriqi’s style and numbers to find out whether he’d be able to adapt to a top-six side.

Since the switch to Fenerbahçe, Muriqi has taken his game up a level.

Some players take time to adapt to playing for a new team using a different style and with Çaykur Rizespor, the forward wasn’t playing for one of the top teams in the country.

He wasn’t underserviced but he wasn’t seeing much of the ball either. He averaged just 22 passes, managed just 2.87 touches in the penalty area and attempted 1.67 shots per 90.

Those numbers are par for a mid-table team, nothing remarkable. But his finishing stood out. He had an expected goals average of 0.33 but ended the campaign with 0.46 goals per 90.

Elite strikers tend to outperform this metric but they tend to need a high volume of shots to achieve it. Muriqi didn’t and it's a huge positive when weighing up whether to sign a forward.

The Fenerbahçe man isn’t adding as much value to his efforts this season but it’s worth noting the sample size isn't the largest. His return of 0.5 goals per 90 is shy of the 0.74 expected goals average. You can look at that as a negative; he’s being wasteful. Or it could be seen as a positive; he’s getting into good areas on a regular basis.

He is, though, seeing more of the ball in the box and he’s now winning a higher percentage of his aerial duels.

Muriqi isn’t blessed with blistering pace but he makes up for that with determination. He’s not a traditional target man, he’s much more agile than that. It’s why he can adapt to different teams and systems. 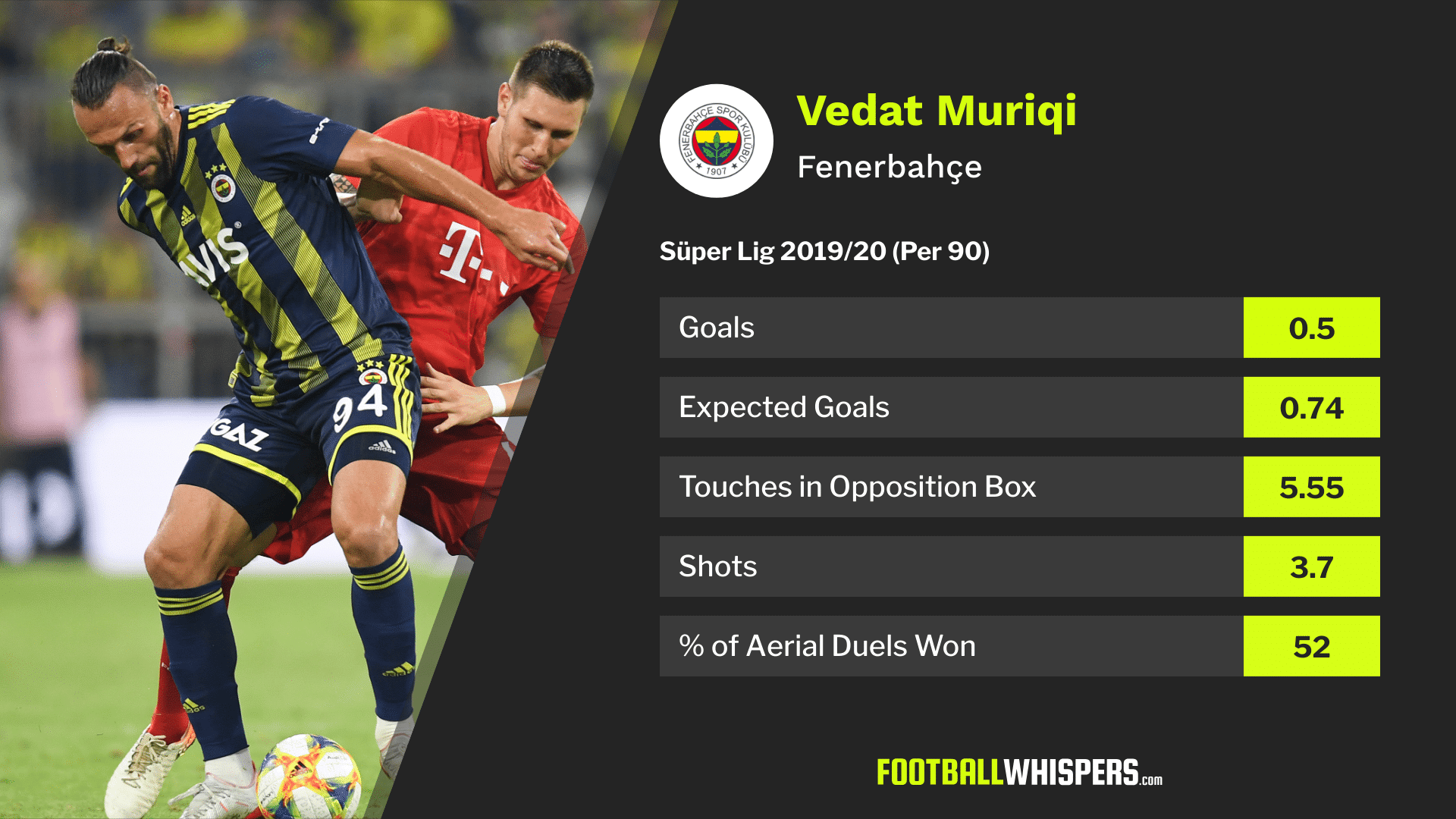 For Kosovo, he can be found popping up in wide areas. For Fenerbahçe, he roams the width of the penalty area just looking for opportunities.

His two goals for the Turkish giants don’t look very similar on first viewing. His strike against İstanbul Başakşehir came after he made a dart into the penalty area and stretched to poke the ball past the goalkeeper from close range.

The goal he netted against Gaziantep arrived after he chested the ball down in the box and emphatically fired past the keeper on his trusty left peg.

But the movement in the build-up to both is eerily similar. Despite his physical presence, Muriqi used subtly to carve out both openings. He positioned himself between centre-back and full-back and timed his run to avoid an offside call.

It’s nothing exceptional – it certainly won’t make a highlight reel – but it’s perhaps Muriqi's most important quality. The one true trait that is transferable no matter where the forward plays, be it Fenerbahçe, Manchester United or Tottenham.