Throughout Leicester City‘s triumphant Premier League 2015/16 campaign, there were two MVPs. There was Riyad Mahrez, the deliciously skilled Algerian who won the PFA Player of the Year award after an outstanding individual campaign. And there was Jamie Vardy, the less showy but equally effective fox in the box.

Vardy flourished under Claudio Ranieri after the Italian unlocked his full attacking potential with a system that placed an emphasis on the forward's speed and intelligent movement.

Vardy was never out of the headlines. His improbable rise from part-time, non-league anonymity to Premier League sensation made him a tabloid king, while British screenwriter Adrian Butchart, the man behind the Goal! films, revealed he was exploring plans to pen a cinematic retelling of Vardy’s rags-to-riches tale.

Importantly, amid the Hollywood-esque delirium, Vardy kept scoring. The former Fleetwood Town forward even etched his name into Premier League folklore, becoming the first player to score in 11 consecutive matches.

Vardy's 24 goals and six assists were a stunning return that season, especially as he had managed just five in the season before. And yet he has quietly amassed another impressive haul in the current campaign with 18 to his name.

The difference? Leicester have hovered in mid-table for much of the season. They haven't been shambolic like West Bromwich Albion or Stoke City, but they haven't scaled the heights of the Ranieri era. Or even come close.

But Vardy has remained as deadly as ever, outperforming his xG of 11.39 by more than six goals. The current term has been much more productive than last as the 31-year-old has improved his post-shot xG, goals-xG ratio, xG per shot and shot placement ratio (post-shot xG/xG).

For the xG novice, that essentially means Vardy has been improving the quality of his goalscoring chances with accurate shots and clinical finishing. With only one assist this season compared to last, he hasn't been quite as creative but, by focusing on finishing, he has been able to improve his goalscoring output by 33 per cent.

But Vardy has had to adapt. In that title-winning campaign, a lot of teams underestimated Leicester, pushing high up the pitch. That left space for the Foxes to break into, playing right into Vardy's hands. The England international was particularly devastating before Christmas, benefitting from long, lofted passes over defenders from one of his teammates (often Mahrez).

As the season wore on and Leicester emerged as genuine title contenders, defenders grew wary of conceding space and dropped deeper. As a result, Vardy's hot-streak cooled somewhat. 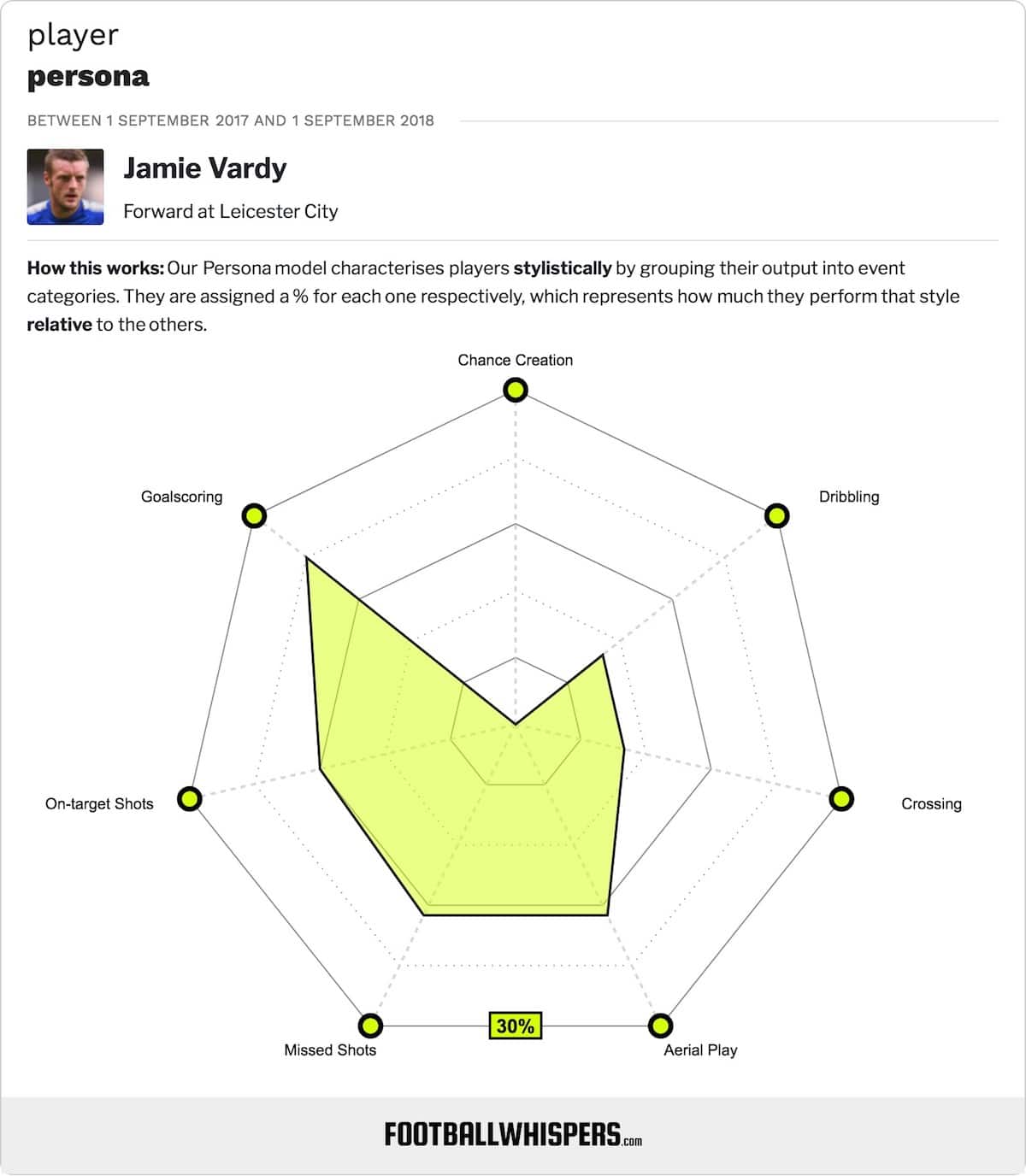 But it hasn't hindered Vardy, who has averaged a goal every two games under the Frenchman and had benefitted from a rejuvenated Mahrez. Although the 27-year-old's head was turned by reports he was a Manchester City transfer target in January, his form has improved hugely this season compared to last. Mahrez has directly assisted five of Vardy's goals compared to just two last season.

Interestingly, Vardy isn't a blistering stats-buster in the vein of Mohamed Salah or Kevin De Bruyne. He is ranked 94th in successful take-ons, 38th in touches inside the opponent's area and 32nd in xG per 90.

But while those particular stats don't provide the most reliable illustration of Vardy's progress, there is one that underlines his mentality and Premier League prowess more than any.

This season in games against the top six Vardy has scored nine goals in 11 appearances. It's a remarkable record and one which highlights the striker's big-game prowess, something Gareth Southgate may want to consider when mulling over his selections at this summer's World Cup.

Overall, Vardy has scored 40 per cent of his Premier League goals (24 out of 60) against either Liverpool, Arsenal, Manchester City, Manchester United, Chelsea and Tottenham Hotspur. This season, he has not only scored with regularity but relished clashes with the league's heavyweights, displaying that trademark dead-eyed finishing in the box to maintain his status as one of England's most efficient goal scorers.

In fact, it could be argued that Vardy is even more efficient than he was during the 2015/16 season. That season, he hit a total of 115 shots, scoring 24 goals. This year, he's only hit 66 shots but found the net 18 times, giving him a much higher conversion rate of 27 per cent compared to 21 per cent. That conversation rate surpasses Salah, Harry Kane, Raheem Sterling and Sergio Agüero.

While Puel's future remains unclear, Leicester fans will be hoping for more of the same from Vardy next season. His pace might not be quite as electric as it was in his younger days but, despite being the wrong side of 30, the England striker is showing no signs of slowing down and remains one of the Premier League's most deadliest marksmen.