Virgil van Dijk has asserted himself upon the Premier League over the course of two seasons with Southampton, and it would be no surprise to see him depart the club this summer. Such a move could work for both player and club: van Dijk has suggested he has the capability to operate at a higher level, perhaps with a team frequently seen in the Champions League, and Southampton have found their niche as the Premier League’s most efficient selling club, allowing their stars to go before intelligently reinvesting the proceeds from each sale back into scouting, youth development and new signings.

Thus, the real question isn’t if or when van Dijk will leave Southampton, but for whom. Several of the Premier League’s traditional title challengers have been linked with a move for the player, including Chelsea and Manchester City. However, more recently Arsenal have also been rumoured to be keeping tabs on the centre-back. The rumour makes sense in a couple of different ways.

The first way is to do with a most surprising development: tactical experimentation from Arsène Wenger. While in his early years as Arsenal manager Wenger was renowned for his progressive approach to tactics (as well as diet and fitness), he has in recent years stuck steadfastly to a 4-2-3-1 shape. In victory or defeat, the Frenchman has remained loyal to the system. This was the case until Monday night’s 2-1 win over Middlesbrough.

One of the most important early decisions in Wenger’s Arsenal tenure was to gradually shift away from the 3-5-2 the likes of Tony Adams, Martin Keown and Steve Bould were used to under his predecessor Bruce Rioch, and implement his favoured 4-4-2. The back three hasn’t been used consistently, if at all, by Wenger since. However, in what was a crucial match following 3-0 and 3-1 defeats to Crystal Palace and West Brom respectively in Arsenal’s last two away games, Wenger lined his side up in a 3-4-2-1 shape against Middlesbrough. 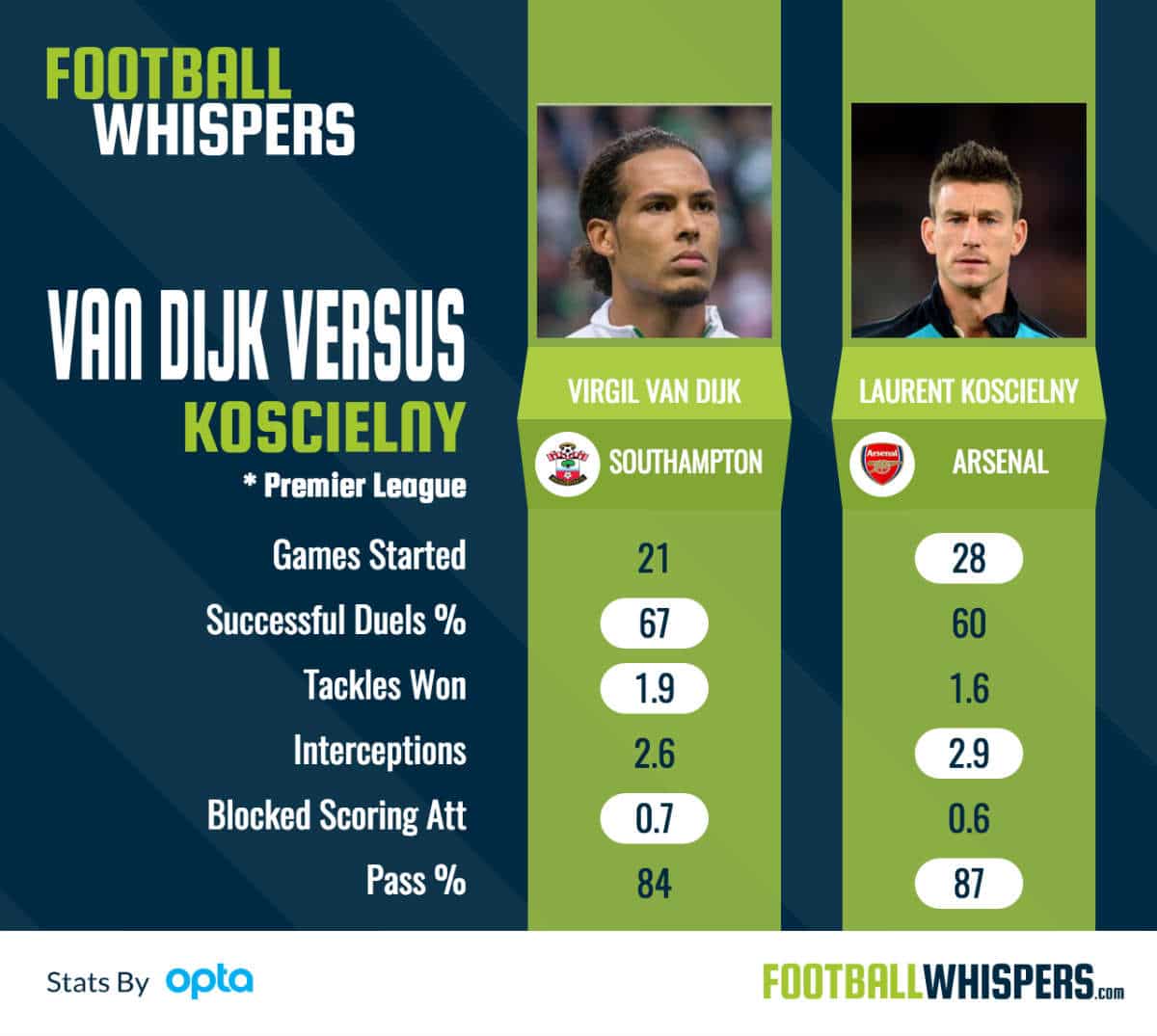 The 3-4-2-1 has gained popularity this season primarily for its use by table-topping Chelsea. Mauricio Pochettino’s Tottenham and Brendan Rodgers’ Liverpool have also opted for the formation in recent Premier League history, but neither team stuck with it. Given the implementation of the system came with a win, Wenger may look into using it more often going forward. But to do so, he will need another high-calibre central defender. And that’s where van Dijk could come in.

Currently, Arsenal’s first team squad includes five centre-backs: Laurent Koscielny, Shkodran Mustafi, Gabriel Paulista, Per Mertesacker and Rob Holding. It’s also worth noting that as of next season they may also have Calum Chambers, who has impressed on loan at Middlesbrough in 2016-17. However, of this group, Koscielny and Mustafi are the only consistent performers who are both in their prime and proven at the highest level. Mertesacker has seen his best years, Gabriel is seen as a bit of a liability, Holding lacks experience, and it is unclear if Chambers if of the quality to play for Arsenal.

If Wenger is to persist with the back three, he would be wise to pursue another centre-back to ensure he has at least three he can be absolutely comfortable fielding, week after week, in domestic and continental competition. Van Dijk could be the solution in this respect, though he should remain a genuine transfer target for the Gunners even if Wenger dispenses with the three-man defensive line and reverts to the 4-2-3-1.

The second, and arguably more relevant, way in which the rumour of van Dijk to Arsenal makes sense regards the profile and future of Koscielny. The Frenchman has been the club’s most important defender since joining from Lorient in 2010 in the same window that saw William Gallas depart the Emirates Stadium, but at 31 years of age there is increasing doubt around how much longer he can lead the back line.

READ MORE: WHY LIVERPOOL MUST SECURE THE SIGNING OF VIRGIL VAN DIJK

Van Dijk, at 25 years of age, is at a much earlier stage in his career. Having spent his formative years in the Netherlands with Groningen and in Scotland with Celtic, the Dutchman – who looks set to miss the rest of this season due to injury – has settled quickly to life in the Premier League and, now a regular internationalist for his country, he is on the verge of his peak years.

However, his relative youth is one small aspect of what might intrigue Wenger. The larger emphasis of Wenger’s interest will be on van Dijk’s style of play, as well as his physical, technical and tactical attributes.

Southampton, like Arsenal, generally prefer to operate with a back four. They also have broadly similar ideals in the sense that they favour having and using ball possession and building this possession patiently from the back. According to WhoScored, Southampton’s 53.8 per cent average possession is the highest outside of the Premier League’s top six, and only 3.2 per cent below Arsenal’s average. 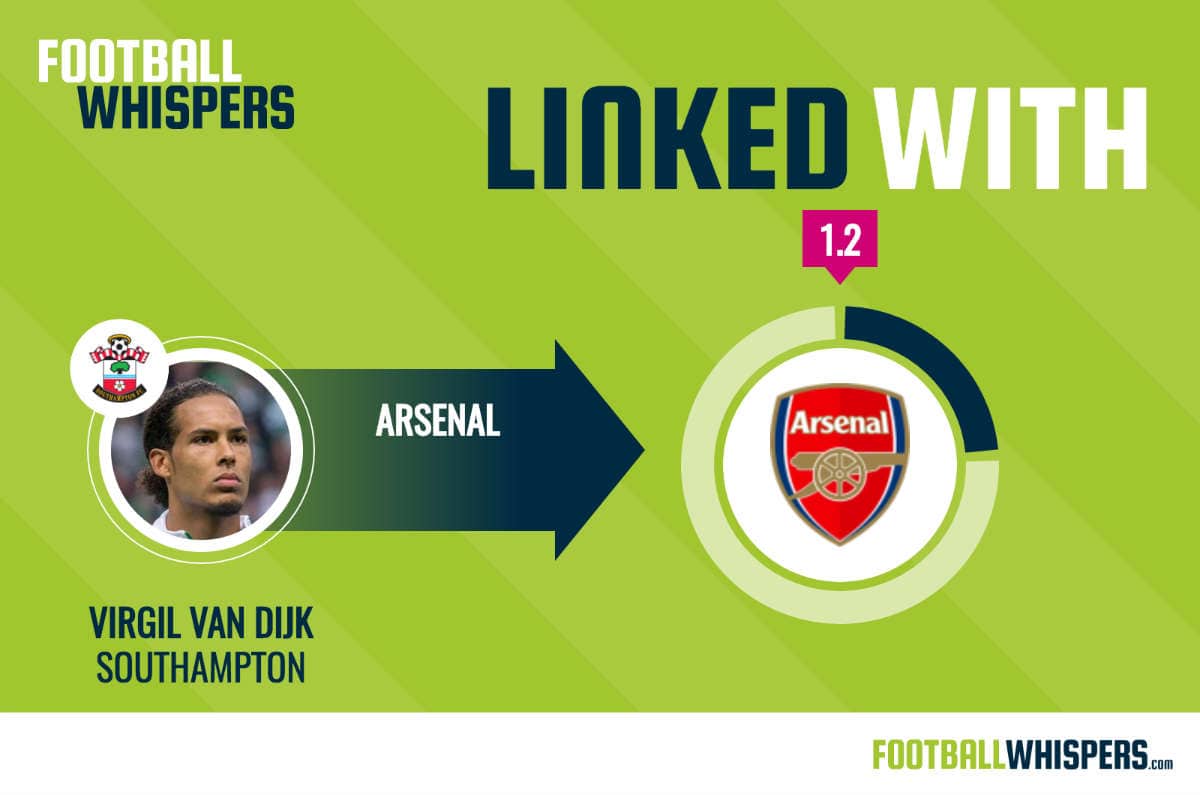 Thus, playing for Southampton usually requires a certain degree of comfort on the ball, and van Dijk has shown this in spades. Indeed, Squawka’s data shows that van Dijk has created 0.24 chances per 90 minutes of Premier League action this term, something made all the more impressive when noting Koscielny has averaged 0.07. Van Dijk’s refined touch, accurate and clever passing, and desire to drive forward on occasion should theoretically enable him to slot seamlessly into Arsenal’s attacking tactics.

He also has the raw physical and defensive characteristics to ensure a solidity Wenger’s side at times lack. In terms of stature, van Dijk is taller, standing at 6’4” compared to Koscielny’s 6’1”, and aerially he is a more commanding presence. This is shown rather starkly when comparing the two statistically—per Squawka, van Dijk has won 75 per cent of his aerial duels this season, whereas Koscielny has won 60.59 per cent.

In addition to his stylistic suitability and ability to command his back line, van Dijk occupies the same left-sided central defensive role as Koscielny, meaning he would have no difficulty succeeding the Arsenal man in a positional sense.

Assuming a deal with Southampton is financially viable, and that Wenger stays on into next season, Arsenal would be wise to move for van Dijk. Doing so would not simply give them greater central defensive options, but would guarantee the future of their back line as Koscielny’s career winds down.