While the image of Mohamed Salah leaving Kalidou Koulibaly for dead before gleefully poking the ball beyond David Ospina will live long in the memories of Liverpool fans, there was an equally crucial moment at the other end during their nerve-shredding 1-0 win over Napoli.

Yes, Liverpool are through to the last 16 of the Champions League – but they have Virgil van Dijk to thank as much as their matchwinning Egyptian.

In the 13th-minute, Napoli broke – and broke quickly. Suddenly, Nikola Maksimović sprung into midfield and spotted Dries Mertens darting through the middle. The right-back nudged the ball into the Belgian's path, but it was ever so slightly overhit, allowing the defender to intervene.

The Dutchman doesn't need a second invitation to make a decisive challenge and proved it by shutting down the counter with a well-timed slide, poking the ball to Sadio Mané.

Having initially played on, the referee spotted Mertens rolling around on the pitch, stopped play and booked Liverpool's no.4. The Kop was incensed. Replays showed that he had clearly caught the Napoli forward but only after having cleanly won the ball.

Had VAR been used, it almost certainly would have gone under review.

Whatever way you looked at it, whatever your opinion on the colour of the card, it was a vital interception, one which summarised another supremely impressive display by Van Dijk in the Liverpool back-line.

He is, almost a year after joining from Southampton, a bonafide commander in this Liverpool team, an unfaltering presence who seems to genuinely relish the more strategic, vocal elements of defending, whether it be screaming at Trent Alexander-Arnold or engaging his captain, Jordan Henderson, in a heated debate when there is a break in play.

Van Dijk carries himself with an unanswerable authority. His 6ft 4in frame already makes him an imposing specimen but the way in which he stands, upright and chest out, makes defying him even more difficult.

He always seems to be in the right place, too. Even before the Mertens tackle, the 27-year-old offered a clinic in defensive positioning when he intervened to stop Mário Rui's searching cross finding Lorenzo Insigne. See below. 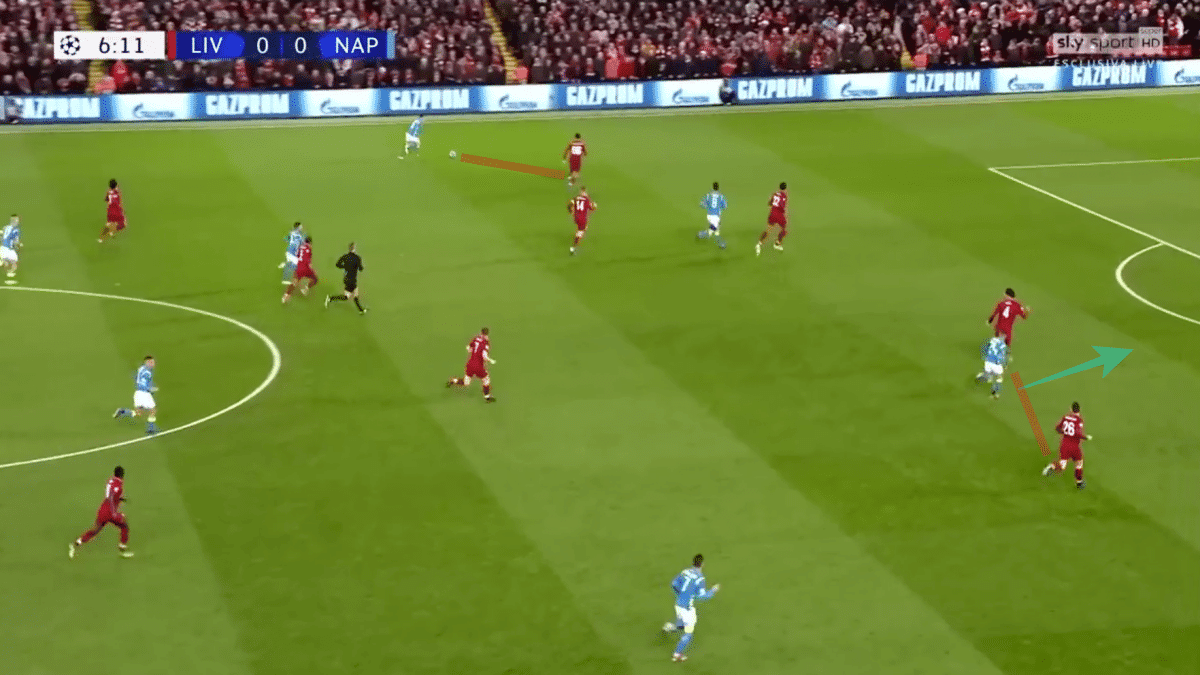 Insigne makes a smart run in between Andrew Robertson and Van Dijk. It's spotted by the advancing Rui and, with Alexander-Arnold struggling to get across to the left-back, he is able to swing a pass around the young Englishman and towards Insigne. 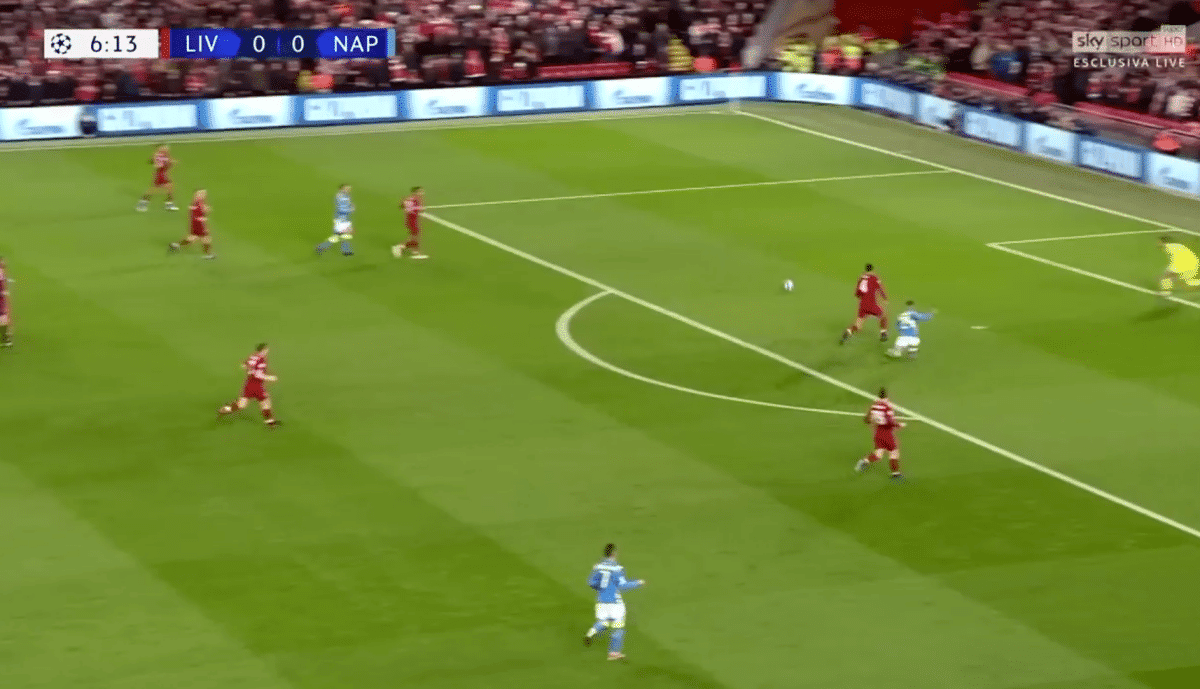 With Joel Matip already picking up his man, the 27-year-old is perfectly placed as the second line of defence behind Alexander-Arnold. 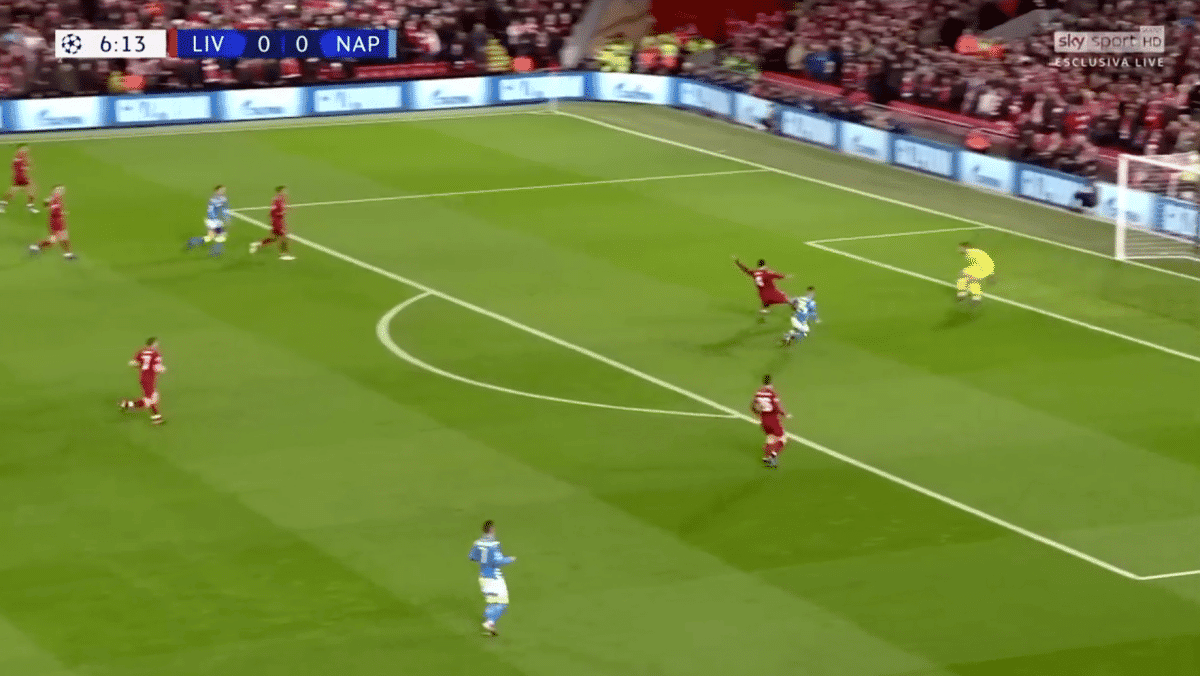 The replays appeared to confirm that Alisson would not have got to the ball before Insigne. With the Italian's finishing, Van Dijk prevented a golden chance for the Partonoepi to draw first blood.

With Liverpool in the lead, there was another moment just after half-time in which the centre-back excelled. Once again, it came during an incisive Napoli counter.

An Insigne pass sliced the Reds midfield open and sent Mertens through. Instead of taking on Matip, the diminutive Belgian opened his body and tried to find José Callejon on the right side of Liverpool's penalty area. 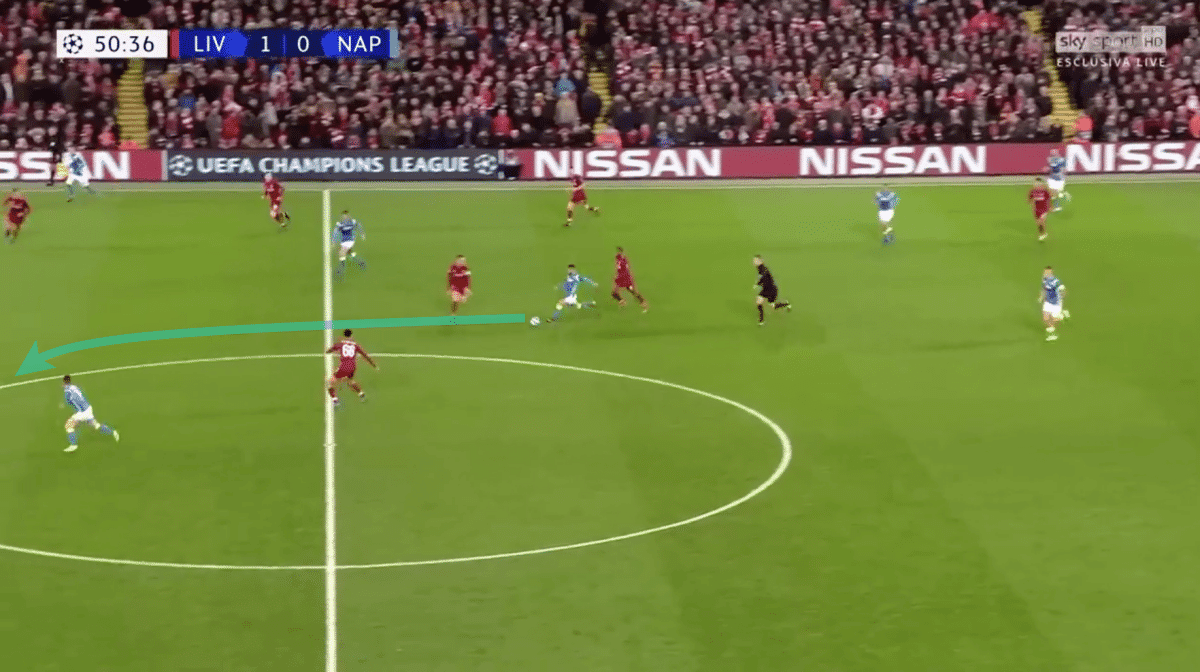 In the screenshot below, it's four on three in Liverpool's favour but, with Mertens squaring up to Matip, the level of threat is high. Van Dijk is switched on, though. With his partner sucked to the ball, the Dutchman's first instinct is to bust his gut to get back and cover the space. 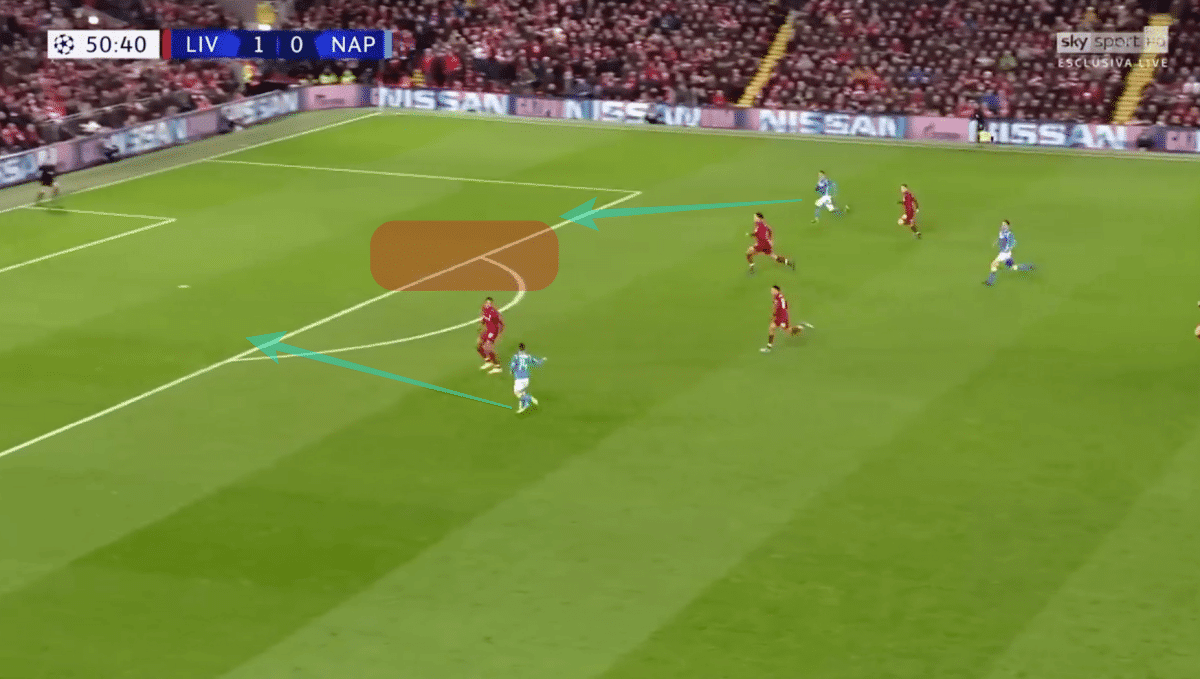 Timing his intervention well, he once again foils another potential opening for the visitors. Had Mertens' pass reached it's target, he may have had time in which to take a touch and possibly find Alisson's far corner. It was another vital contribution from Liverpool's No.4. 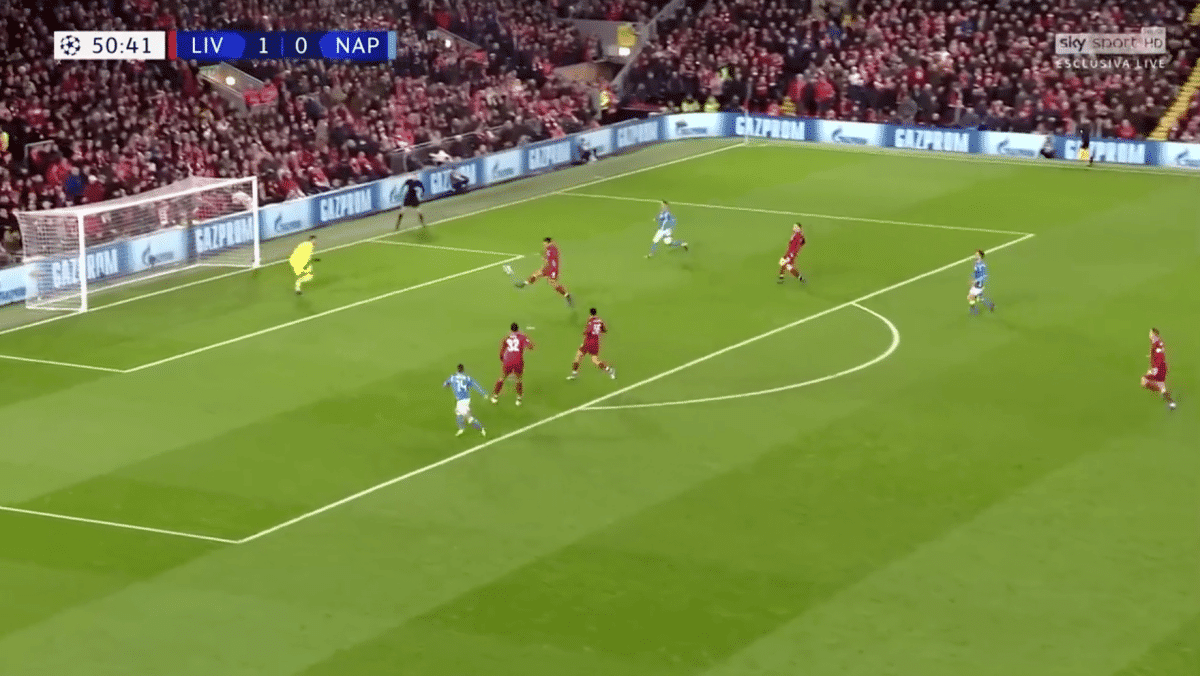 But this game wasn't all about the Reds' record signing as Napoli, too, boasted an elite central defender in their ranks in Koulibaly.

The totemic Senegalese centre-half was a prominent part of Maurizio Sarri's reign in Naples and remains a hugely influential figure under Carlo Ancelotti.

Named in the Serie A Team of the Year in each of the last three seasons, the Senegal international has regularly been mentioned among Manchester United transfer rumours, with The Times claiming the Red Devils would need to fork out £90million for the 27-year-old, which would comfortably surpass the £75million Liverpool paid for Van Dijk's services.

While they are astronomical sums, the former Celtic star is walking proof of how an elite defender can greatly enhance a team. He, along with Alisson, is credited with transforming Liverpool's fortunes at the back, making Jürgen Klopp's men the meanest defence in the Premier League. 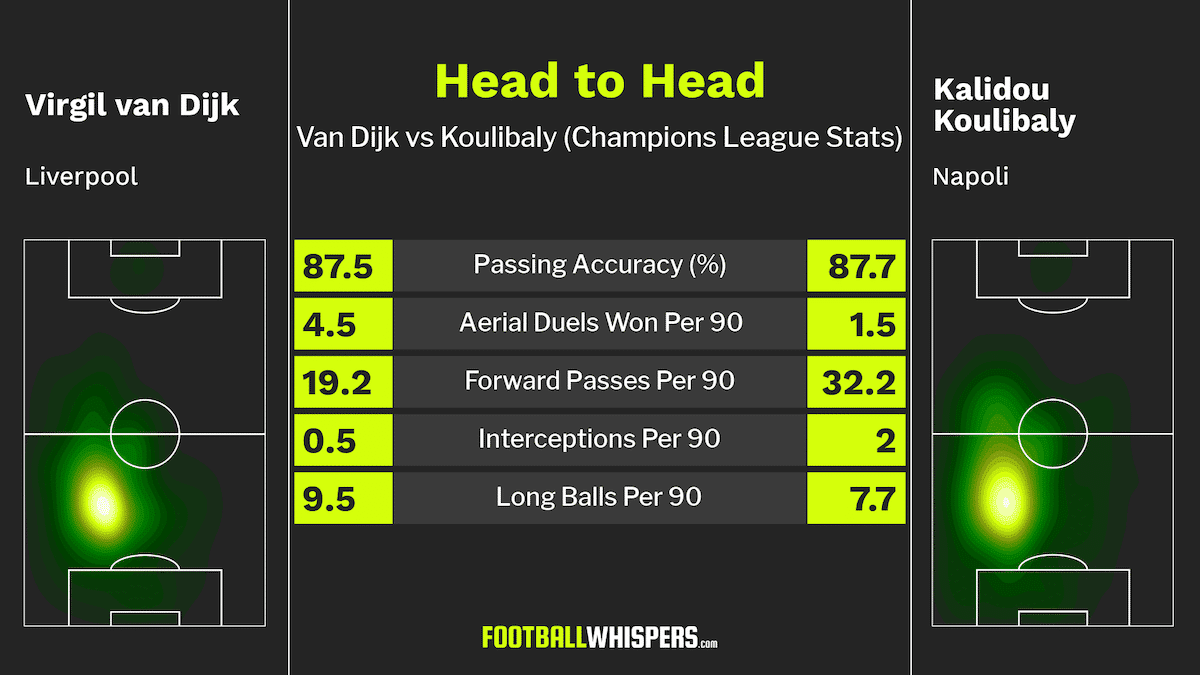 Under the lights at Anfield, Koulibaly proved that much of the hype around him is real. While he was ultimately unable to stop Salah from scoring the decisive goal, such a moment was not reflective of his performance on the night.

In fact, the 27-year-old performed well, organising Napoli's back-line and playing some penetrative passes into the midfield. There was a moment, too, in which he impressively shrugged Salah off the ball. Liverpool's goalscoring sensation may not be the brawniest player but is extremely difficult to knock out of possession.  That he did it with relative ease was an insight into how decisive a defender he can be.

In the end, though, there can be only one winner and, in the battle of the towering defenders, Van Dijk emerged triumphantly. It was just the latest in a series of insuperable performances from one of Klopp's most trusted lieutenants.

He is very much a master in command of his craft and a player operating at optimum efficiency. Should Liverpool proceed to win titles this season, it will rightly be hailed as a collaborative achievement. But some players do stand out time and time again – and the defence's chief conductor falls into that category.