Sometimes a player can arrive at a club for a sizeable fee and it's obvious the price tag is weighing them down. That can't be said of Virgil van Dijk. The Dutchman joined finally Liverpool in January in a deal worth £75million, making him the most expensive defender ever.

Many had reservations and felt the Reds had paid over the odds for the Southampton defender. We may only be in March now but, with the performances he's put in and the impact he's had on those around and ahead of him, van Dijk's been worth every penny so far.

There are even some suggesting the Reds have got one over the Saints, once again. His arrival has coincided with Dejan Lovren playing his best football since his move to Merseyside in the summer of 2014. That's no mean feat.

Furthermore, the inclusion of the Liverpool No.4 in Jürgen Klopp's starting XI has shown that Joël Matip isn't all that defensively. He still looks uneasy and his decision making isn't the best, and that's with the soothing presence of van Dijk beside him.

Klopp has continued to rotate the pair, almost as though the right centre-back position is a timeshare. But Liverpool's trip to Old Trafford this weekend is perhaps the biggest game of the season to date. A win takes them above their hosts on Saturday and they will be, at least, seven points clear of Chelsea in fifth when the weekend is over.

A win in the home of their fiercest rivals goes a long way to securing Champions League football for a second successive campaign. With this in mind, van Dijk's partner on the day might be a good indicator as to who Klopp believes is his first choice centre-back.

Some might say the Liverpool manager might just be picking the best man for the job. After all, Lovren and Matip aren't very much alike in terms of style. But there are arguments to be made for both to start – which will be detailed below – which counteracts that suggestion. There's no obvious choice.

Manchester United will, more than likely, look to sit deep on Saturday afternoon. It's how José Mourinho‘s men have lined up against Liverpool in the previous three matches and there's no reason to suggest that approach has changed. The Reds are yet to defeat the Red Devils in the Premier League under the former Chelsea boss.

The best way to break the home side down will be to fill the team with competent and positive passers of the ball.  This is one of Matip's greatest strengths. He often carries the ball out from the back and plays passes which break the defensive lines. This gets the ball to Liverpool's best players in dangerous areas. 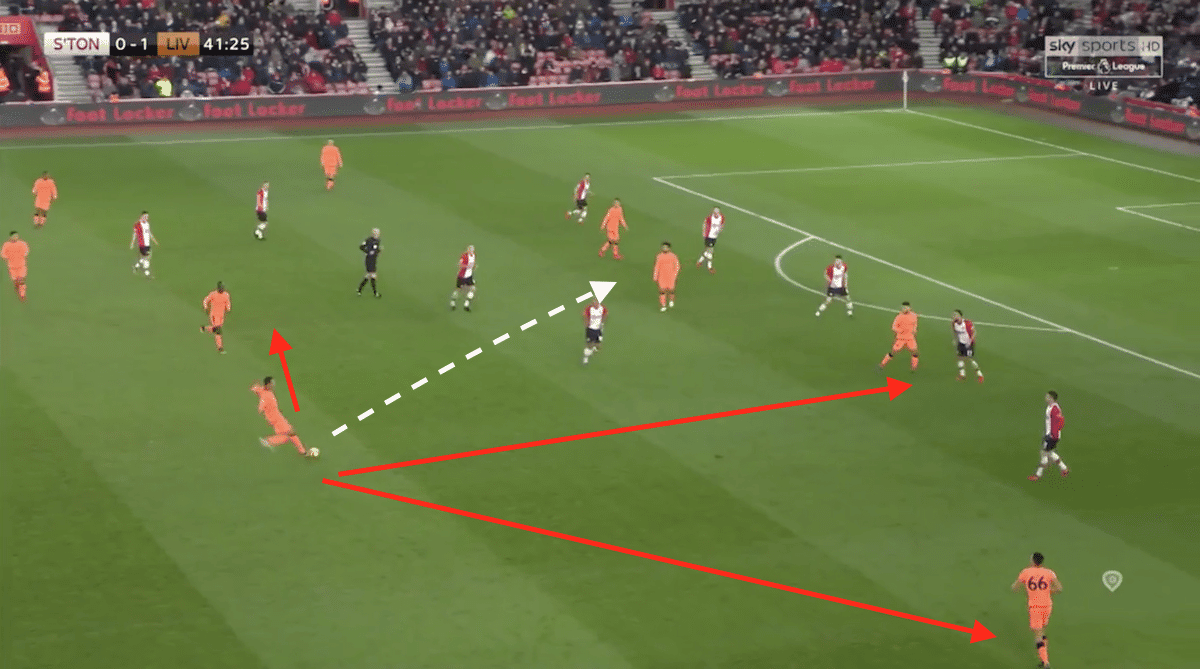 There was an example of this in the 2-0 win over Southampton a couple of weeks back. In the picture above you see Matip in possession with four passing options, highlighted by the arrows.

Many would opt to play one of the three shown in red. They're progressive but, at the same time, they're on the safer side. Instead, the former Schalke star plays a pass between two of the Southampton midfielders, the white arrow, and into the feet of Mohamed Salah. The Egyptian plays a one-two with Roberto Firmino and in the blink of an eye the Reds have doubled their lead.

That's what Matip brings to the team and it could be invaluable against a United side.

However, In a recent feature on Football Whispers, we took a detailed look at the best play-playing centre-backs in the Premier League and Matip and Lovren made the top ten.

The Croatia international isn't in van Dijk's league when it comes to putting the ball on a team-mate's toe, as discussed in this piece highlighting the impact the Dutchman has had at Anfield, but he's not Martin Škrtel's level of bad when it comes to playing out from the back.

When looking a xA90 (expected goals assisted per 90 minutes) it's actually the Liverpool No.6 who leads the way with 0.06, double Matip's 0.03. While Matip may look as though he's the progressive one, and his passes do break the lines, it is, surprisingly, Lovren who creates higher quality opportunities for his team-mates. 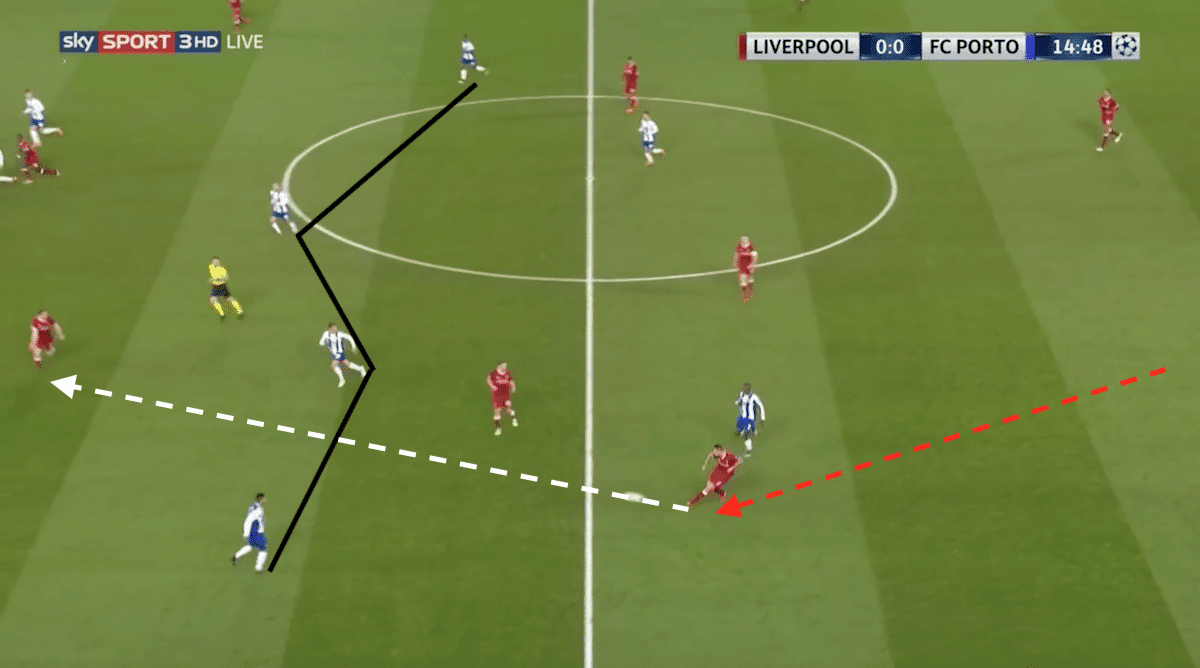 The former Southampton man showed glimpses in the draw with Porto that he's trying to evolve his game. To accompany his long, diagonal passes he was carrying the ball into midfield and playing balls into feet. It's not something he's usually associated with, and he didn't look entirely comfortable doing it, but it was effective.

Porto stood off of the centre-back and allowed him to drive forward. He then played a ball between two players, as you can see above, into the feet of James Milner after the Liverpool No.7 peeled off into space. It was a nice change of pace from Lovren, who up until that point had been fairly safe when in possession, and showed he does have it in him to play passes Matip is often lauded for.

So with Matip no longer have exclusive rights to the ‘defender who carries the ball forward and plays incisive passes' title, how do the centre-backs compare when other stats are looked at? 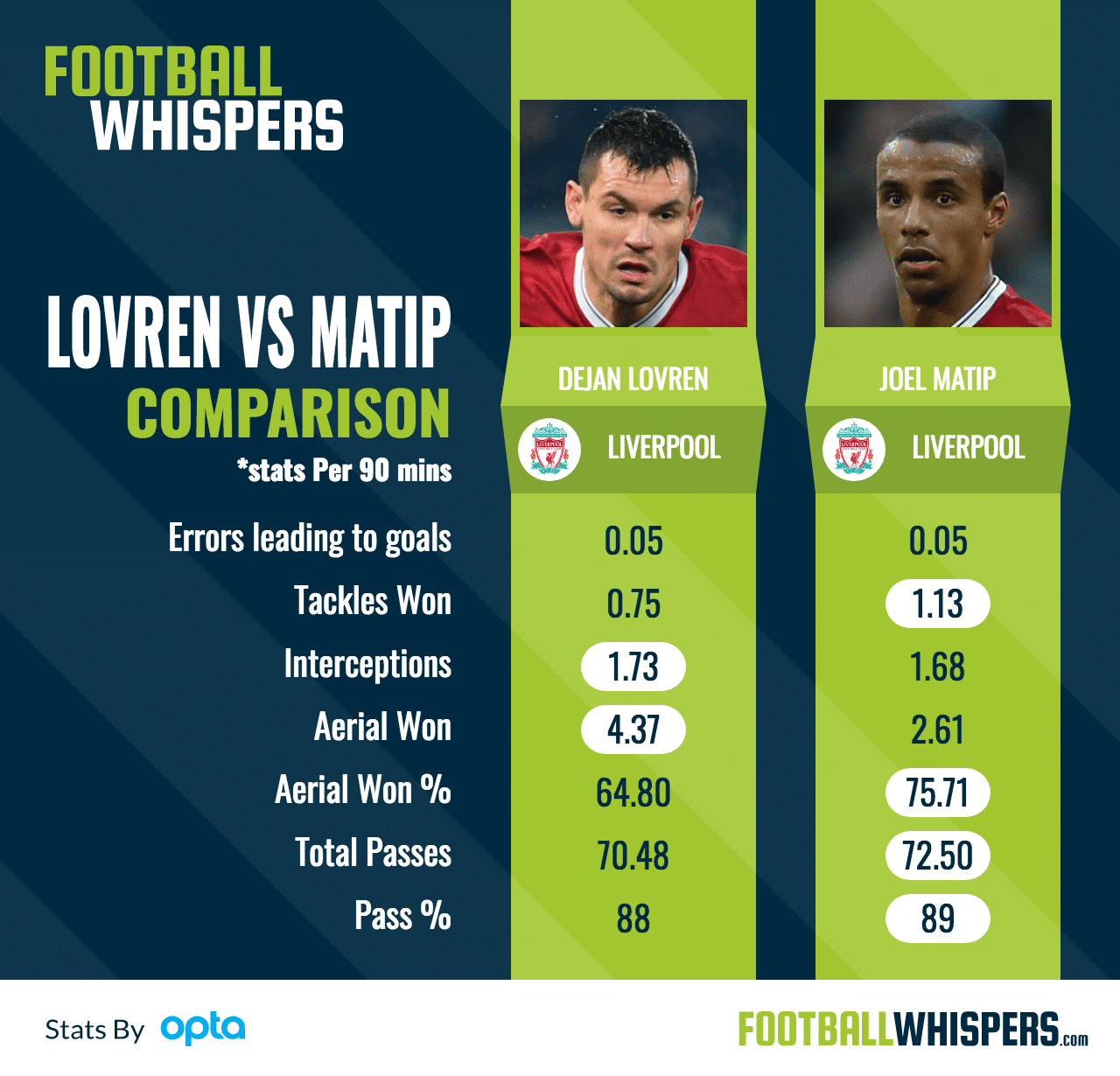 They're pretty evenly matched when looking at the graphic above. Matip is the winner when looking at tackles but that's not necessarily a good thing.  There are people who believe if you're having to make a tackle then you're in a bad position to begin with. On occasion that will be true but it can't be used a blanket way to judge the tackles stat.

Interceptions is a good stat to look at with Liverpool playing on the front foot. Lovren just about edges it but there's only a difference of 0.05. It's a similar story with passes. Matip leads the way for total passes and pass completion but it's not by much.

The biggest difference between the two is when it comes to aerial duels won. Matip's 75.51 per cent success rate may imply he's better in the air but he's only challenging for 2.98 per 90 minutes.

Lovren is winning 64.80 per cent of his aerial duels but he's going up for 6.74 per 90 minutes. Matip wins more percentage wise but he does not go up for many because he doesn't have to while playing beside Lovren or van Dijk.

United are a big, physical side meaning Liverpool will need to be aggressive in the air. Romelu Lukaku is winning, on average, 3.4 aerial duels per 90 minutes. Though the former Everton man has just scored three headed goals in the Premier League, the same amount as Firmino. The next attacking player on that list is Paul Pogba with 2.3. It's on set pieces they'll be dangerous.

All that taken into account, it makes sense to start Lovren beside van Dijk on Saturday. His stats not only point towards him being the best man for the United game but the best man to partner van Dijk until the end of the current campaign.