When Liverpool parted with a world record fee to bring Virgil van Dijk to Anfield, many expected an immediate improvement. The £75million signing was touted as the man to solve the defensive problems that had plagued the Reds for a number of seasons.

In many ways he got off to the perfect start. His debut for Liverpool was the stuff dreams are made of. Attacking the Kop end, he rose highest to head home Alex Oxlade-Chamberlain’s 84th minute corner kick to condemn Everton to yet another derby day defeat.

He wasn’t signed to just be a goal threat, though. But, at the same time, he didn't arrive on Merseyside to just shore things up defensively for Jürgen Klopp’s men either. The former Southampton man was expected to contribute going forward and lead the Liverpool defence. To his credit, his influence is already noticeable.

In the four games he's played for the Merseyside club they've conceded four goals. It's a small sample size but it's an improvement on the 1.16 they've averaged in the other 24 Premier League matches. Of course, it's not all down to the 26-year-old Dutchman. Loris Karius' performances between the sticks have seen him catch the eye and he's finally making some big, game changing saves.

However, perhaps the biggest improvement since van Dijk's arrival is Liverpool's build-up play.

Klopp's side look to dominate the ball. The Reds average the fourth highest amount of possession per match with 56.6 per cent, slightly behind  Tottenham Hotspur (58.5 per cent) and Arsenal (58.8 per cent) with Manchester City leading the way on 66.5 per cent.

When it comes to passes per 90 minutes, Liverpool rank third, attempting 587 passes, behind Arsenal and Man City. It can often be monotonous to watch but it's all about creating space to exploit.

With Klopp's men seeing so much of the ball it's vital that those who see the ball are not just comfortable on it, they're effective when in possession.

Joël Matip is one of the best in the Premier League at carrying the ball into midfield, as revealed in a feature on the Football Whispers website. His incisive passes into the feet of the attackers help create chances on a regular basis.

Dejan Lovren, on the other hand, is the more expressive centre-back of the two, often looking to play long balls from defence in an attempt to stretch the opposition. However, the Croatia international wasn't always as accurate as he could have been.

In van Dijk Liverpool signed a player who can execute the passes Lovren couldn't, and he does so on a regular basis. The Dutch centre-back put on a masterclass against FC Porto, pinging passes around the Estádio do Dragão as though it was a training game.

In those 90 minutes in Portugal, fans saw exactly why Klopp was prepared to spend big to land van Dijk.

Above you see Porto lining up with three defensive lines in a 4-4-2 shape. The scoreline at the time is 0-0 and the home side are looking to press Liverpool high but without leaving any spaces centrally.

With one swing of his right foot van Dijk opens the pitch up and creates space for Liverpool to exploit. His diagonal pass takes six outfield players out of the game and gets the away side into a good area of the pitch to build from. It's weighted to perfection and  and it allows Trent Alexander-Arnold to bring it under his spell before quickly playing a pass to Mohamed Salah. Unfortunately, the No.11 is crowded out but Klopp's men do retain possession.

The above isn't too dissimilar to the first example. Porto look fairly organised in their 4-4-2 shape and they look to be dictating where Liverpool can and can't play. There are no obvious progressive passes on.

But van Dijk manages to float a ball over the top into Sadio Mané's path. He had the beating of Ricardo Pereira throughout the match and it would've been interesting to see how the play would've progressed had the attacker been able to bring the ball under control.

These two passes are the sort some of the best playmakers in the world would have been proud of.

The Liverpool centre-back has a short game as well. He doesn't just rely on pinging passes from the defensive third, as you can see above against Swansea. He steps into midfield and delicately lifts the ball over the top and onto Salah's toe. The Egyptian blazes over but the pass couldn't have been any better. 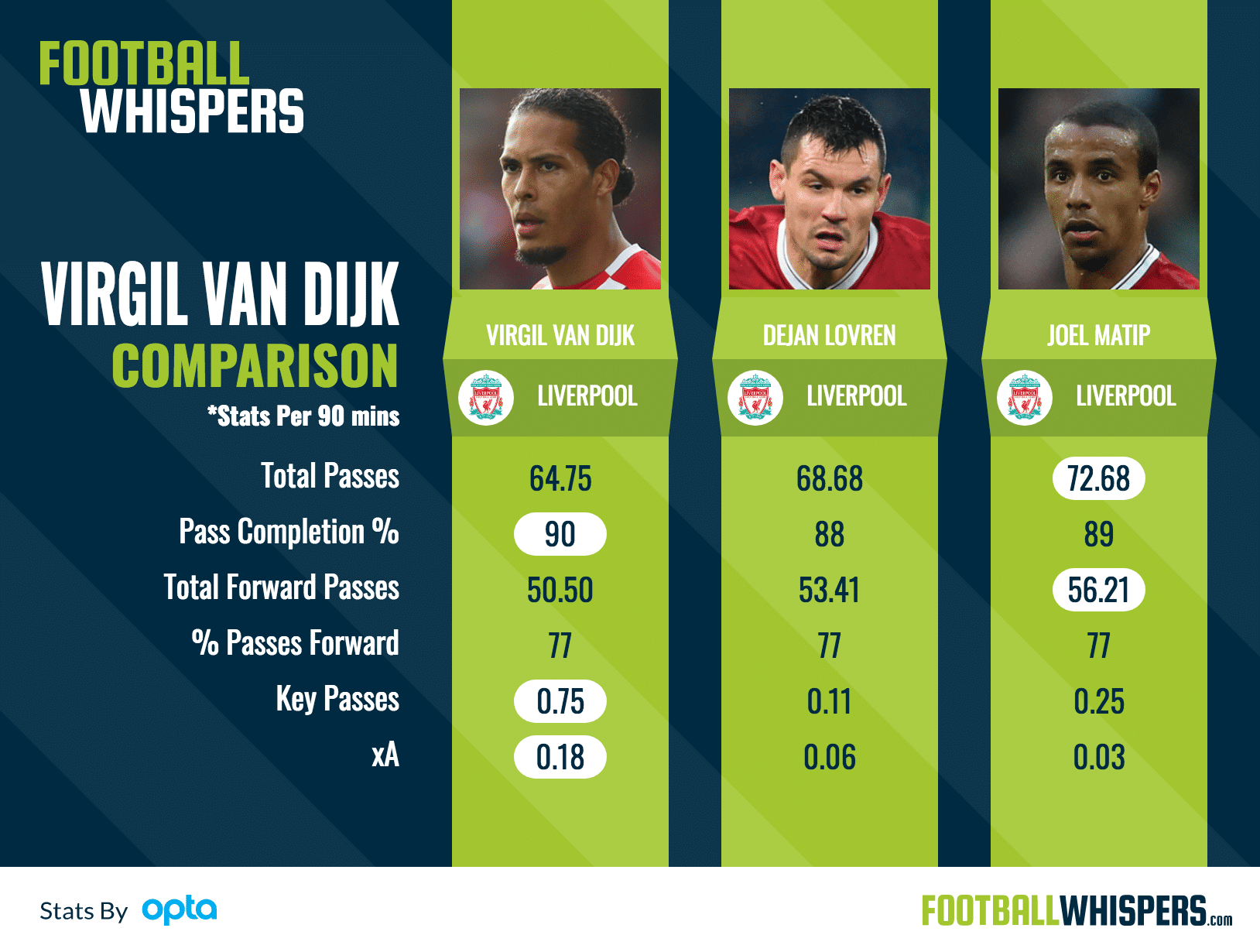 The graphic above shows the impact van Dijk has on Liverpool as an attacking force. Though the former Southampton man averages the fewest amount of passes per 90 minutes, he comes out on top, just about, in the pass completion category.  All three defenders play 77 per cent of their passes forward but as you can see when looking at key passes, van Dijk's the creative one. He's averaging 0.75 per 90 minutes, dwarfing that scores of Matip and Lovren even when theirs are combined.

It's safe to say the £75million signing has had quite the impact on this Liverpool side but, to the surprise of many, perhaps more so offensively than he has defensively.