Southampton made a stand in the summer. Liverpool, who have made a habit of plucking the best and brightest from St. Mary's over the last few years, wanted Dutch international defender Virgil van Dijk, and van Dijk wanted Liverpool. But the Saints stood firm.

The South Coast club refused to sell their prized asset, who still had five years to run on a six-year deal signed at the end of his first season with the club. Southampton even accused the Reds of making an illegal, unauthorised approach for the player, forcing Liverpool to issue a statement of apology and end their interest in the player.

The show of defiance was largely seen as a win for the Saints. Sure, they could have brought in as much as £60million for the in-demenad defender, but this was about more than money: this was Southampton's way of showing they would not allow themselves to be bullied by the Premier League's power clubs.

However, three months on from the summer transfer window closing, many inside St. Mary's are beginning to question whether they should have taken the money and run, as van Dijk's form has been some way short of the high standards he has set for himself since moving south of the border from Celtic in 2015.

Van Dijk was left out for the opening weeks of the season, training alone after asking to leave. “The boy said that he is not available to play because he wants to leave,” Southampton manager Mauricio Pellegrino told the press. “I had to say: ‘If you don’t want to be involved because you don’t feel OK then you have to train alone until this period of time is over.'”

The Dutchman didn't return to the Saints starting line-up until September 30, and has hardly impressed since then. Last weekend, Southampton faced Liverpool at Anfield, a game that would have undoubtedly caused a mental conflict for van Dijk. But if the Reds were casting a watchful eye over their top transfer target, they'd hardly have been impressed.

Liverpool ran out comfortable 3-0 victors, and van Dijk struggled to contain Jürgen Klopp‘s dynamic front three of Roberto Firmino, Sadio Mané and Mohamed Salah, with the former Celtic star unable to make a single tackle against the Reds, although he did manage four interceptions.

The Stats Behind Van Dijk's Slump

Although van Dijk's performances this season have not been atrocious, the noticeable drop-off in his displays has caused many Southampton fans to question whether he is fully committed to the side's cause.

Some even suggest it is time for the Dutchman to be dropped, and that a combination from Wesley Hoedt, Maya Yoshida and Jack Stephens would be a better option for the Saints at this time, rather than field van Dijk, who is by far the most talented of the bunch but is coming across as disinterested of late. 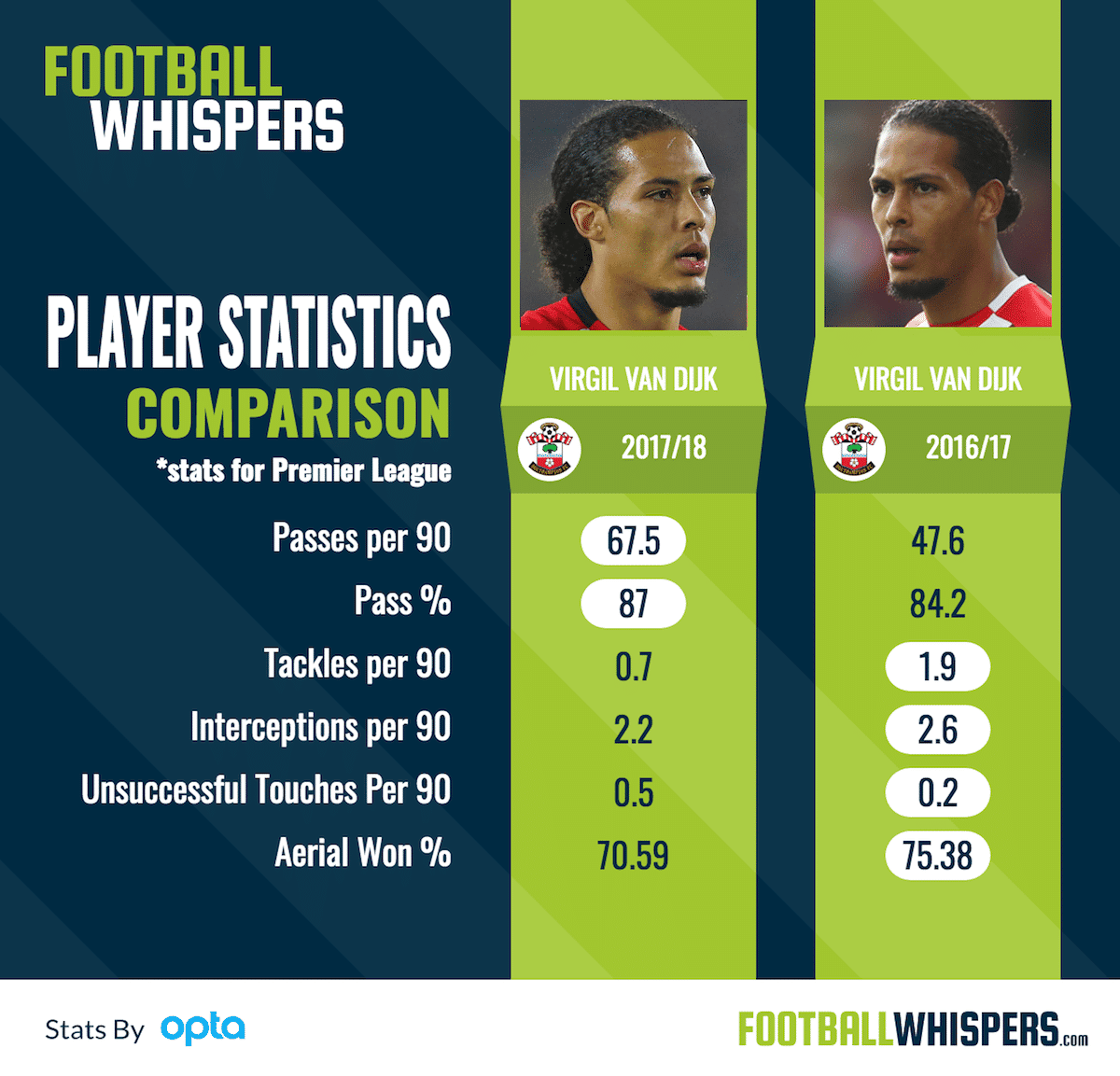 As the above graphic shows, in terms of his performance on the ball, van Dijk has actually improved this term, making more passes per 90 minutes at a higher accuracy.

However, while ball-playing centre-backs are very much en-vogue in world football these days, van Dijk's job, first and foremost, is a defensive one. And his defensive stats are declining.

He is currently operating at a lower level when it comes to tackles, interceptions and aerial duels compared to his stellar form of last season. And, although he is seeing more of the ball and making more passes than previously, he is also losing possession more often, making 0.5 unsuccessful touches per game, up from 0.2 last season.

If his form does not improve by January, Southampton might be wise to cash in on van Dijk, having made their point in the summer by refusing to sell him on somebody else's terms.

However, they now face a Catch 22 situation: Pellegrino will not want to continue to field the Dutchman if his form does not improve, yet sidelining the player risks decreasing his value ahead of an eventual sale, be it in January or at the end of the campaign.

Furthermore, Manchester City and Chelsea were reportedly interested in van Dijk over the summer. But with the form of John Stones and Nicolás Otamendi at the Etihad, and the way Andreas Christensen has impressed recently in David Luiz's place for the Blues, they may no longer feel the need to splash a huge sum on a centre-back.

This would leave Liverpool as the only interested party, meaning Southampton might struggle to command a fee as high as the £60million they could have easily expected to receive had they sold in August.

The best-case scenario for all involved is for van Dijk to rediscover his peak form, thereby making himself a more attractive proposition for prospective buyers, and ensuring Southampton benefit from his full powers and receive a hefty fee when sold, which can then be reinvested.