The final match of La Liga to be played on Sunday is probably the most anticipated of them all – the Valencia vs Real Madrid duel. With that in mind, we have a detailed preview of this game just for you.

Our top free betting predictions for Valencia vs Real Madrid

If you are looking for the top La Liga betting predictions, you've come to the right place. So, check our top betting tips for the Valencia vs Real Madrid game:

Valencia and Real Madrid to Draw

Even though Valencia was far from their best selves in the last couple of seasons, they managed to beat Real Madrid 4-1 in one of their most recent head-to-head matches. Of course, Real Madrid has more wins recently, but Valencia is never an easy opponent. This season, Valencia had a furious start and they are currently tied at the top with their next opponent with ten points from the first four rounds. So, a draw sounds like a reasonable outcome for this game.

Whenever Real Madrid plays, we like to suggest this prediction. Simply, Karim Benzema has powered Real Madrid last season and he is doing the same at the start of this season too. Last season he scored 23 goals in La Liga and this season he already found the net five times in just four games.

Check our selection of top odds from the best UK betting sites and the latest stats for the Valencia vs Real Madrid duel:

Valencia vs Real Madrid preview: Derby of the Round

The Bats had another disappointing season last year and the fans probably lost all hope that the team could return to being one of the best clubs in Spain. However, they are probably very optimistic after a great start of the new season in which Valencia recorded three wins and a draw in the first three games. In addition to this, the team is currently free of injuries and will play the next game in full strength.

After failing to win any trophies last season, the price was paid by the coach, as usual. Zinedine Zidane was replaced by Carlo Ancelotti, while the team suffered only minor changes. Real Madrid started the new season with three wins and a draw and they are currently sitting at the top of the standings, along with a few other teams. Ceballos and Kroos are currently injured and will miss the game against Celta Vigo. 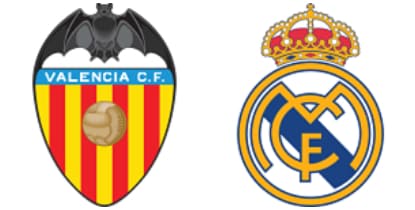