Perhaps the most interesting duel of the round in La Liga is the Valencia vs Rayo Vallecano matchup, so check our preview of this match if you want to learn more about it.

Our best Valencia vs Rayo Vallecano betting predictions and tips

If you are looking for free La Liga betting tips, we can help you out. So, here are some of our top betting picks for Valencia vs Rayo Vallecano:

Valencia and Rayo Vallecano to Draw at Half Time

The Bats had a few solid results lately, including a win over Villarreal and two consecutive draws with Atletico Madrid and Real Sociedad. However, Rayo Vallecano has been sensational so far since the team that played in La Liga 2 last season is currently fifth in the league.

Taking that into account, we feel that this game can go in any direction, so we would avoid betting on the final score. Instead, we suggest betting on the teams to draw at half time, since we expect a close match which will probably be decided in the second half.

While we've seen three or more goals in just two of the last five meetings between Valencia and Rayo Vallecano, our prediction for their upcoming duel is to go over 2.5 total goals.

Similarly to our previous prediction, both teams have scored in just two of the previous five h2h duels between Valencia and Rayo Vallecano, but we expect that to happen in this game.

The reason lies in the fact that both teams scored in 64% of all Valencia matches in the league this season, while the same is true for 50% of all Rayo Vallecano games in La Liga thus far.

The latest odds and useful stats for Valencia vs Rayo Vallecano

If you don't want to spend a lot of time looking for the best Valencia vs Rayo Vallecano odds, check them all out in one place, right here:

Valencia vs Rayo Vallecano preview: One of the most interesting games of the round

The Bats have been very inconsistent this season, being hot and cold in streaks, disappointing against some weaker teams and surprising the fans with good performances against tougher opponents. Overall, the team is right in the middle of the table, in the 10th spot, with 18 points from 14 games. Gabriel Paulista is injured and he will miss the upcoming game.

The most pleasant surprise of the season in La Liga so far has to be Rayo Vallecano. The team that just came back to the top flight from La Liga 2 is currently sitting in the sixth place in the standings, ahead the likes of Barcelona, Villarreal, and others. In the last six games, Rayo Vallecano has three wins, one draw, and two losses. Ciss and Marquelanz are on the team's injury list, while Trejo will miss the game to serve a suspension.

FAQ for Valencia vs Rayo Vallecano 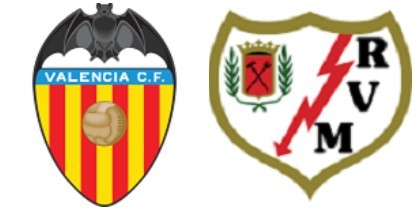