Valencia have found an unhappy medium. They're 15th in La Liga having drawn eight of their 11 league games this season. Considering they drew seven in the whole of the previous campaign, something has happened to Los Che.

They are nowhere near the calamitous mess of the 2015/16 season, which saw four different men – Nuno Espírito Santo, Voro González, Gary Neville and Pako Ayestarán – attempt to steady the ship.

But then they are a far cry from the side which finished fourth last season, Marcelino securing the club's return to the Champions League at the first time of asking.

The former Villarreal boss proved to be exactly what Valencia had been looking for: a shrewd and competent leader whose revolution founded on intense training and strict dietary rules banished the darkness that lingered from a string of disastrous appointments.

But now reports of Spanish football's sleeping giant awakening to challenge the Barcelona–Real Madrid duopoly seem impetuous, with Marcelino struggling to break free from a sense of perpetual parity. His side aren't losing many games – just two – but can't seem to win, either, with a 1-0 victory at Real Sociedad in September their only success in 11 attempts.

They find themselves in a curious position; five points from bottom but six off sixth-placed Real Madrid. For the purpose of stability, it's better to have a run of draws than to oscillate wildly between thrilling wins and catastrophic defeats – both of which Valencia have experienced in recent years – but, having flirted with the notion of a title bid this season, Marcelino needs to turn draws into wins sooner rather than later.

One of their main problems this season has been finding the net. Including Champions League games, they have fired six blanks already. Their return of seven goals in La Liga is paltry, especially seeing as they spent over £50million to sign Gonçalo Guedes and Kevin Gameiro as well as adding Michy Batshuayi on loan. 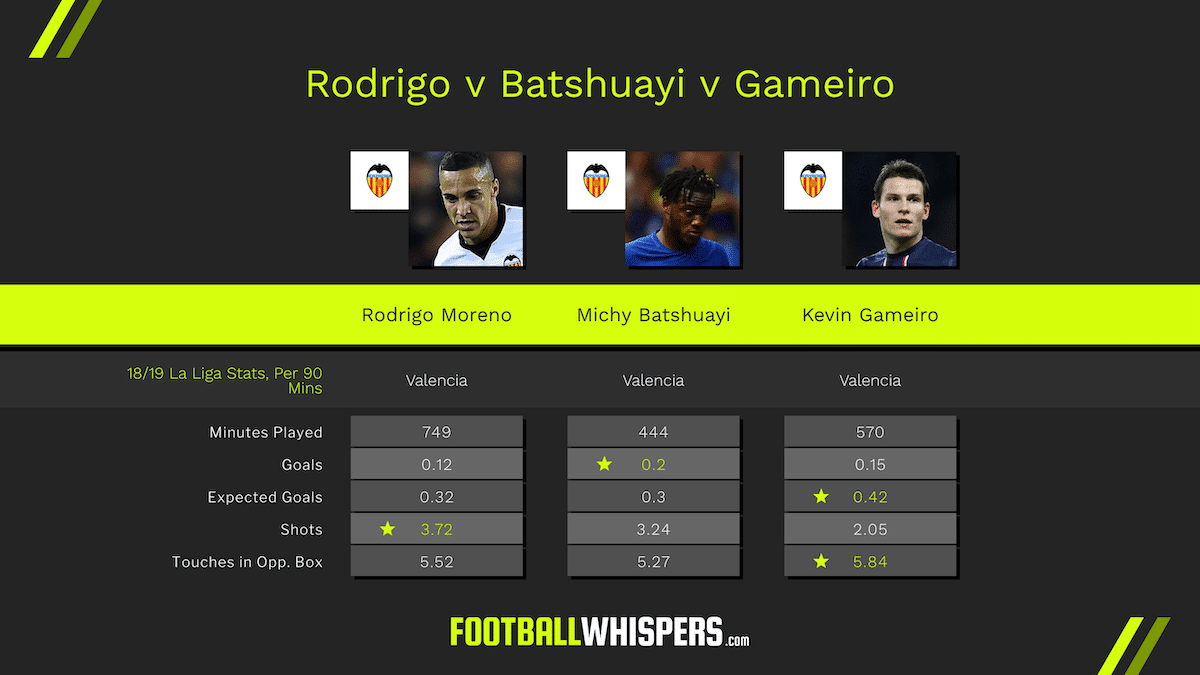 One of the most alarming statistics is that Batshuayi, Gameiro and Rodrigo, who scored 19 times in all competitions last season, have three goals between them in 1763 minutes of La Liga action against a combined xG of 7.

Rodrigo, whose consistency last term earned him a spot in Spain's World Cup squad, is a major factor. His last goal was in the opening day draw with Atlético Madrid and his barren spell has caused growing concern.

It's worth noting, of course, that Simone Zaza, with whom Rodrigo formed a potent partnership, returned to Italy in the summer with Torino, having seen his wish to play in his home country granted by the Valencia hierarchy.

Valencia did not replace Zaza's muscularity and selflessness in attack, however. In Gameiro and Batshuayi they signed two very different players. The Belgian has flopped, though, failing to replicate the excellent form he showed for Borussia Dortmund last season. Gameiro retains an eye for goal but, now 31, is not the future of Valencia's attack.

The problems in attack run deeper. Guedes, whose brilliance last season on loan from Paris Saint-Germain led to him becoming the club's record signing (£36million), missed the first month of the campaign. Having returned to fitness, he hasn't recaptured the spark that made him one of the most exciting players in Spanish football last year. 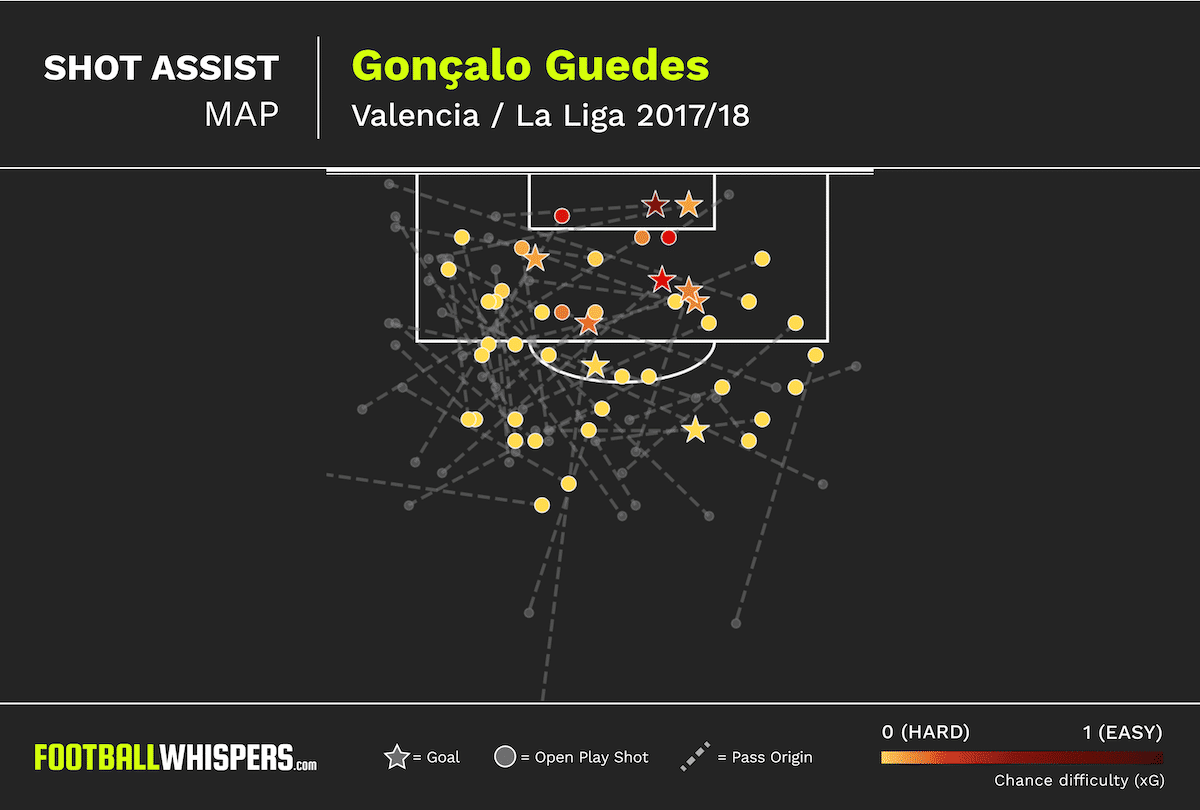 The Portuguese winger last season created more big chances, notched more assists, played more open-play key passes and completed more take-ons than any of his team-mates. An undeniable creative outlet on the wing, his sparkling form has been sorely missed in recent weeks. Without Guedes at his best, Valencia have become ponderous and predictable going forward – reinvigorating him must be high on Marcelino's agenda.

As illustrated by Football Whispers' team comparison persona model, Valencia's style has changed markedly this season. In 2017/18, they enjoyed a lot more possession and shot domination, while their attacks were faster.

This season, however, they have relied heavily on crossing, with the number of chances they have conceded staying more or less the same. The crossing aspect is interesting, however, especially when you consider that Gameiro, Rodrigo and Batshuayi are not renowned for their aerial prowess.

Valencia have conceded nine goals against an xG conceded of 10.94. Only Espanyol and Atlético, second and fourth respectively, have conceded fewer. So, despite their position, Marcelino's men remain relatively sturdy at the back. The emphasis must be on breathing new life into the attack. While 15th points to a reasonably grim landscape, the club are a couple of victories away from hauling themselves back up a bunched La Liga table.

However, with Juventus, Real Madrid and Manchester United to come in the next month, Marcelino faces a race against the clock as he tries to engineer a dramatic turnaround.