Uruguay booked a quarter-final match with France on Saturday after beating Portugal 2-1 in Sochi through a double from Edinson Cavani.

This World Cup has thrown up some amazing shocks, with Mexico, Japan and Sweden surprisingly making it through to the last 16.

Yet, no one would have predicted, both Lionel Messi and Cristiano Ronaldo would be eliminated on the same day, especially not before we reached July.

Uruguay took the lead after just seven minutes when Cavani ghosted in at the back post to fire in Luis Suárez's cross with his head (more his face).

Portugal had to respond after the break and they did when Pepe nodded in from Raphael Guerreiro's corner, but the lead didn't last long.

Cavani's winning goal started back in their own half, then a perfect pass from Rodrigo Bentancur picked out the striker on the edge of the box and his first-time curling finish found the far corner with Rui Patricio at full stretch.

Portugal bossed possession and had 20 shots, but they couldn't find a clear path through to Fernando Muslera's goal.

It wasn't Ronaldo or Portugal's night, they are going home and here are five things we picked out from Uruguay's 2-1 win over the Euro 2016 winners.

Cavani at the double

Luis Suárez had looked off the pace during Uruguay's early games, but goals against Saudi Arabia and Russia have seen him slowly grow into the tournament.

For Cavani, you could see the relief on his face when he scored the third in the 3-0 last group game win.

El Matador scored 28 times in 32 Ligue 1 games last season and he was expected to set this tournament on fire. Cometh the knockout stage, cometh the man.

With only seven minutes on the clock, the PSG striker played a long sweeping ball out wide left to his strike partner, the Barcelona man waited, then his cross, whipped to the far post was met by Cavani's head and Uruguay had stunned the European champions.

After Pepe had brought the game level, it took Uruguay's no.21 just seven minutes to regain the lead. Bentancur sent a ball out to the left edge of the box and without taking a touch, Cavani beautifully curled his shot beyond Rui Patricio.

Just like the tournament itself, once it moves on to the business end, the power players step up and with two wonderful goals, the 31-year-old did just that.

Uruguay's hope will be the injury which saw him come off isn't bad enough to keep him out.

Earlier in the day we saw it from Paul Pogba and Kylian Mbappé, and it was the opposite from Messi. Come the evening, Ronaldo had the chance to step up.

He opened the World Cup with bang, scoring a hat-trick against Spain, then a diving header against Morocco sealed their place in the knockout stage. However, that meant nothing going into the clash with Uruguay.

Once Portugal went behind, the Real Madrid man seemed to put the blinkers on, looking to shoot from distance rather than find team-mates. Normal service you may think, but even the short quick passes had gone.

He finished the game with six attempts on goal, with just one on target. The no.7 created just one chance and was dispossessed three times. It wasn't his night and the Real Madrid man is going home. 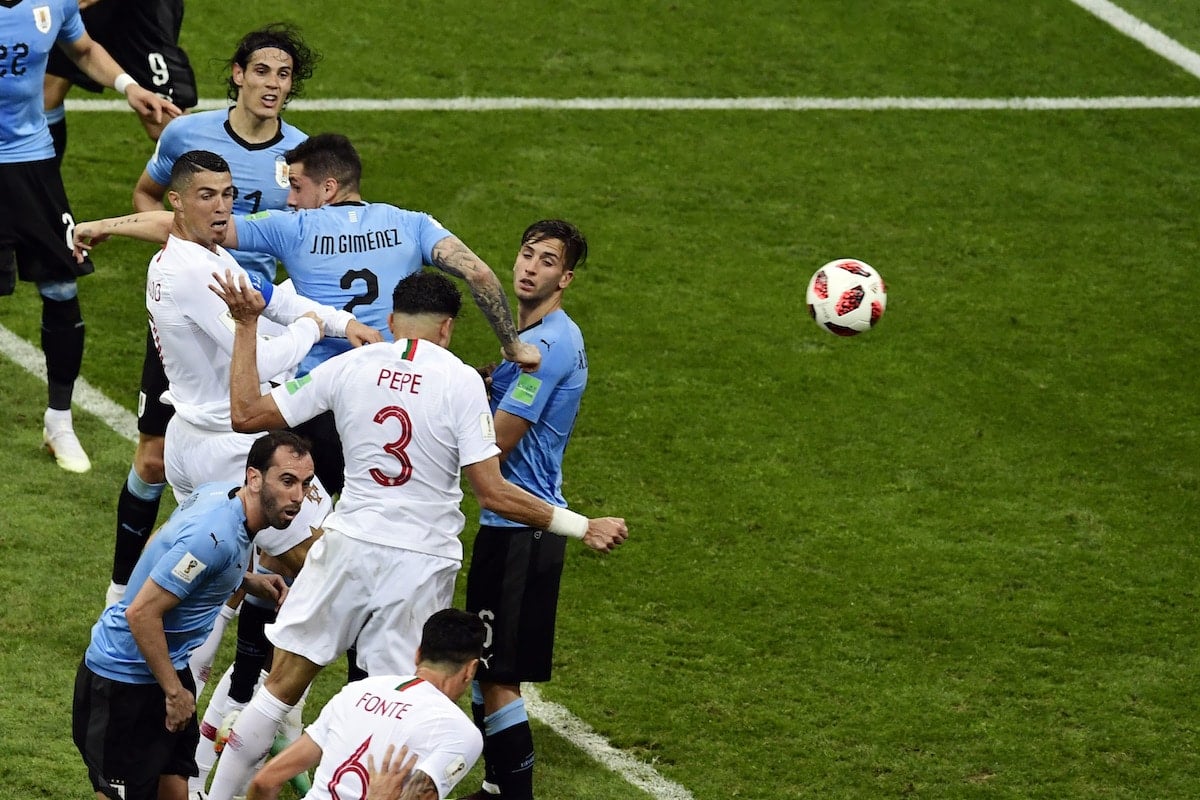 When you have two of the biggest ‘personalities' in football doing battle on the world stage, you expect fireworks.

Pepe has shown time and time again, for club and country, although a fantastic defender on his day, he can be easily distracted we end up with the diving, play-acting and gamesmanship he has become famous for. Then in Suárez, his antics are well-documented.

Bring the two together and anything could happen.

It was the Uruguayan who struck first, picking out Cavani for the opening goal. But Pepe would not be silenced, popping up with a crucial header to level the score after 55 minutes.

He used the danger of Ronaldo to his advantage, ghosting behind Godin to head in the equaliser.

However, in the end, it was the defender who was out of position for the second and although the Barcelona forward didn't add his name to the score-sheet, he did more than enough to help his country win.

Amazingly, neither player ended up in the referee's book. There was only one yellow card in the entire game, and it was handed to Ronaldo.

Óscar Tabárez has tinkered and tweaked his team throughout the tournament.

Against Egypt he started with a flat 4-4-2, lacking width or pace in the midfield and was bailed out with a late Diego Godín header.

Then, in the second match it was a similar formation, but with width expected from Cristian Rodríguez. Again they flattered to deceive and another 1-0 score-line failed to impress.

Against Russia, their best performance in the group stage, the coach switched to a midfield diamond, with Arsenal transfer target Lucas Torreira coming into the team.

It was that quartet which got the nod to face Portugal, looking to win the numbers game with Fernando Santos playing 4-4-2.

Bernardo Silva, William Carvalho, João Mário and Adrien Silva all made more passes than anyone in the Uruguay team, but you would have expected as much.

According to StatZone, Portugal created 15 chances in the game, with those four above contributing eight of them. Tabarez's midfield kept the European side at arms' length and the only big chance created came from the corner Pepe scored from.

They may not have the creativity of the Portuguese midfield and it could come to play a bigger role in the next round, but France must find a way past this Uruguayan brick wall.

Excited for Torreira at Arsenal?

A move is supposedly very close to completion. You'd assume once his time in Russia is up, his signature will be added to a contract taking him to Arsenal.

Torreira's name was not one you heard constantly on Saturday night, but that's not what he is, he's the hard-worker, the heart beat, the energy in the middle of the park.

His aura pushes and pulls the Uruguay team and his personality shines through.

The 22-year-old was instrumental again as his country sealed their place in the last eight. Completing 21 out of his 25 passes, but spreading them between the defensive third, the middle and in the attacking third of the pitch.

He won only one of his five attempted tackles, but also made two interceptions, four blocks, four clearances, won three aerial duels – which standing just 168cm tall is amazing – and blocked two crosses.

Despite playing without the ball and sitting in front of the back four, he only commited one foul. Arsenal fans should be very excited. Torreira looks like the exact type of player they have been missing for years.