Each and every top club will be watching the World Cup with a notepad and pen this summer and Tottenham Hotspur are seemingly no exception. Reports from Germany on Friday suggest the London club have been hugely impressed with Croatian forward Ante Rebić and could be prepared to sign him this summer.

The in-demand Eintracht Frankfurt forward recently extended his contract until 2021, suggesting the Bundesliga club may be looking to extract every last penny out of Tottenham’s bid. However, should the Premier League club suggest a serious offer then there’s every reason that the ambitious forward may be exceptionally interested in testing his talent in the English top flight.

Rebić spent his formative years as a young player learning his trade at Croatian clubs Vinjani and Imotski, before earning a move to RNK Split after showcasing his talents at an international tournament in Italy in 2010.

After just two years in the RNK first team, Rebić’s performances caught the attention of Serie A giants Fiorentina and signed a five-year deal with the club despite reported interest from Premier League sides Swansea City and, coincidentally, Tottenham at the time. However, the move didn’t pan out as well as the Croatian forward might have hoped.

Over the next two seasons, Rebić would make sporadic appearances in the Fiorentina first team but spent most of his time out on loan at RB Leipzig in the 2. Bundesliga and Hellas Verona in Serie B. And it wasn’t until a loan move to Frankfurt that the young Croatian forward began to show his true worth.

Under the guidance of Croatian coach, Niko Kovač, Rebić finally found his feet as an attacking midfielder through the middle of the park or out wide as an inside forward. Kovač repaid the player’s form with another year on loan at the Bundesliga club and then an agreed deal to sign the player permanently.

What are Ante Rebić’s key strengths?

The first thing that tends to strike fans when they watch Rebić play is just how ferocious he is on and off the ball. The Croatian international loves nothing more than to hassle opposing full backs and to all his physicality he undoubtedly has the skill to then simply glide by his markers when they hope to return the favour.

In the Bundesliga, last season Rebić was seventh in the entire league for the amount of 1v1 dribbles he attempted in each match. The Frankfurt forward averaged 8.17 per game – which was more than Arjen Robben or Franck Ribery –  as he and the Eagles once again compelled expectation to finish eighth and win the DFL Pokal trophy.

Rebić often switched between the no.9 or left wing spot throughout the course of the season, but that didn’t stop him scoring nine goals for the Bundesliga side. Such a tally was largely down to the Croatian international’s incredible technique when taking shots. As we saw against Argentina earlier this week, his ability to find the net with loose balls is superb and over the course of the last Bundesliga campaign, he averaged a shot on target accuracy of 59 per cent – the second best in the entire league. 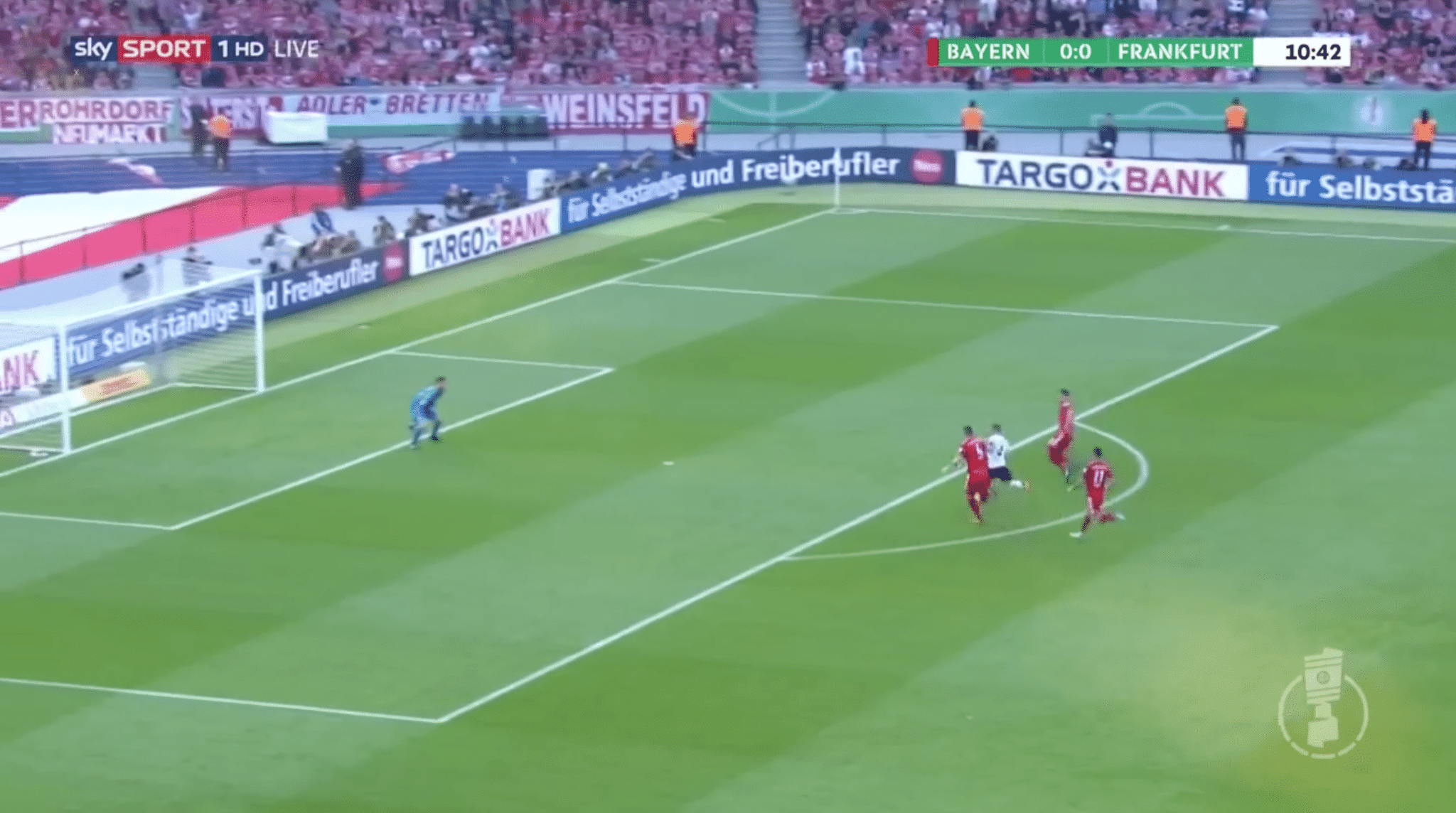 This incredible ability to always find the net means Rebić can just about score from anywhere. Of the nine goals, the Frankfurt forward scored over the course of the past season five either came from outside the box or from just within the outer edge of it, as seen in the picture above. Such is Rebić composure on the ball that simply giving him the slightest slither of time and space anywhere near the goalmouth will be to your peril.

What are Ante Rebić’s main weaknesses?

Despite just pointing out how often Rebić can make goalscoring from difficult angles or positions on the pitch look perfectly easy, the Frankfurt forward does tend to struggle with simply scoring goals on a regular basis.

Nine goals from 28 games isn’t a poor return at all for the 24-year old but it isn’t exactly stellar either. Last season the Croatian forward averaged 0.4 goals per game, which again isn’t bad but does fall short of some of the league’s leading players in his position. 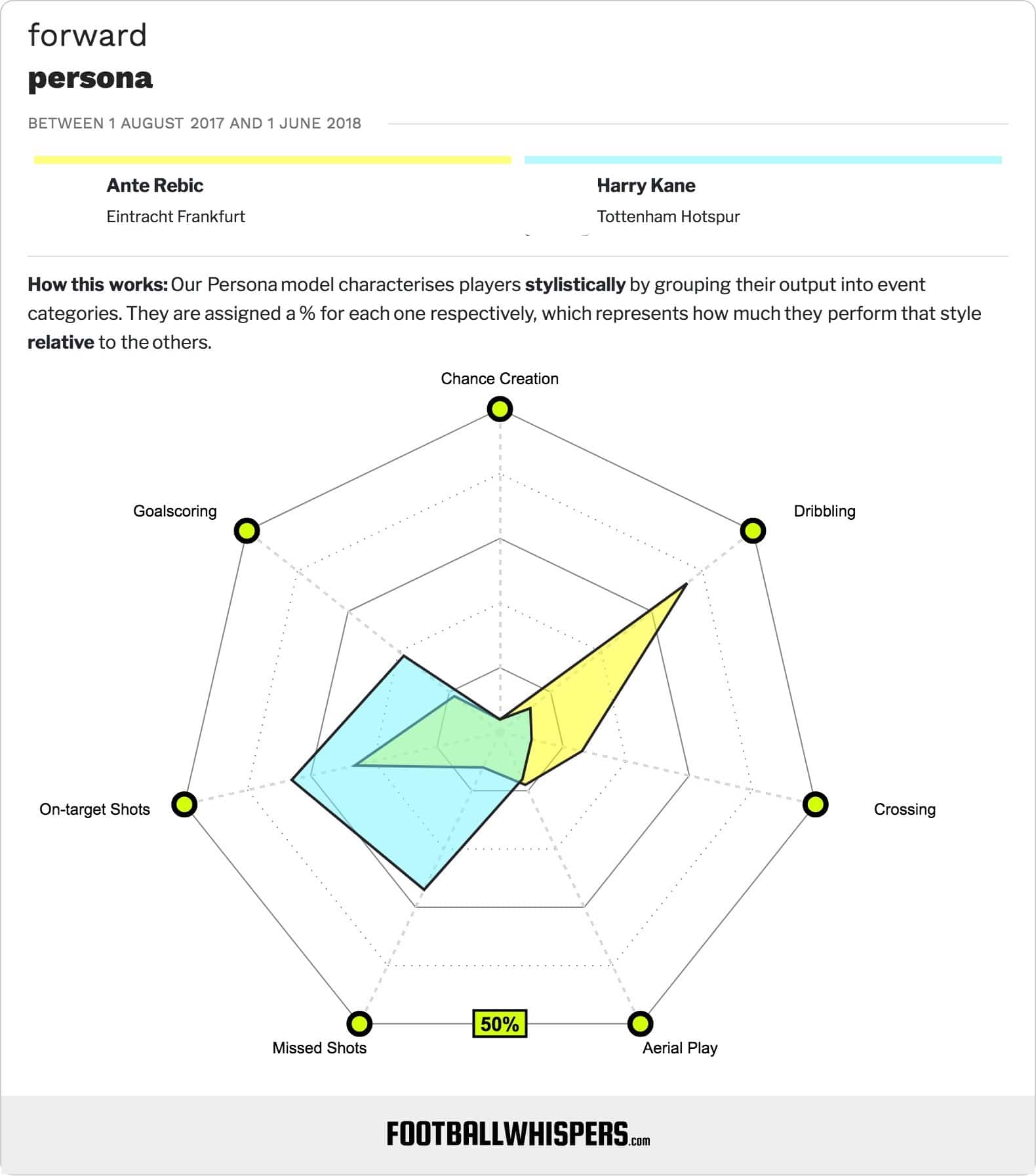 Marco Reus, for example, averaged 0.65 goals per game. His Borussia Dortmund teammate Max Philipp was right behind him on 0.64 goals per match. While fellow wide forwards like Serge Gnabry, Mark Uth and fellow Croatian international Andrej Kramarić all average far better returns for their goals.

Indeed, Rebić may be a superb scorer of goals but he hasn’t yet proven himself to be a reliable goal scorer. And although he does tend to perform in big games as well as he does against lesser foes, he hasn’t yet shown an ability to put teams to the sword with a clinical eye for goalscoring.

There’s also the not-so-small matter of Rebić’s disciplinary record. Over the course of his career the forward has picked up 46 yellow cards and two red cards. Compared to the 31 goals he has to his name as a professional player it’s clear that despite his obvious talents, Rebić is still more likely to get booked than to actually score for his side. 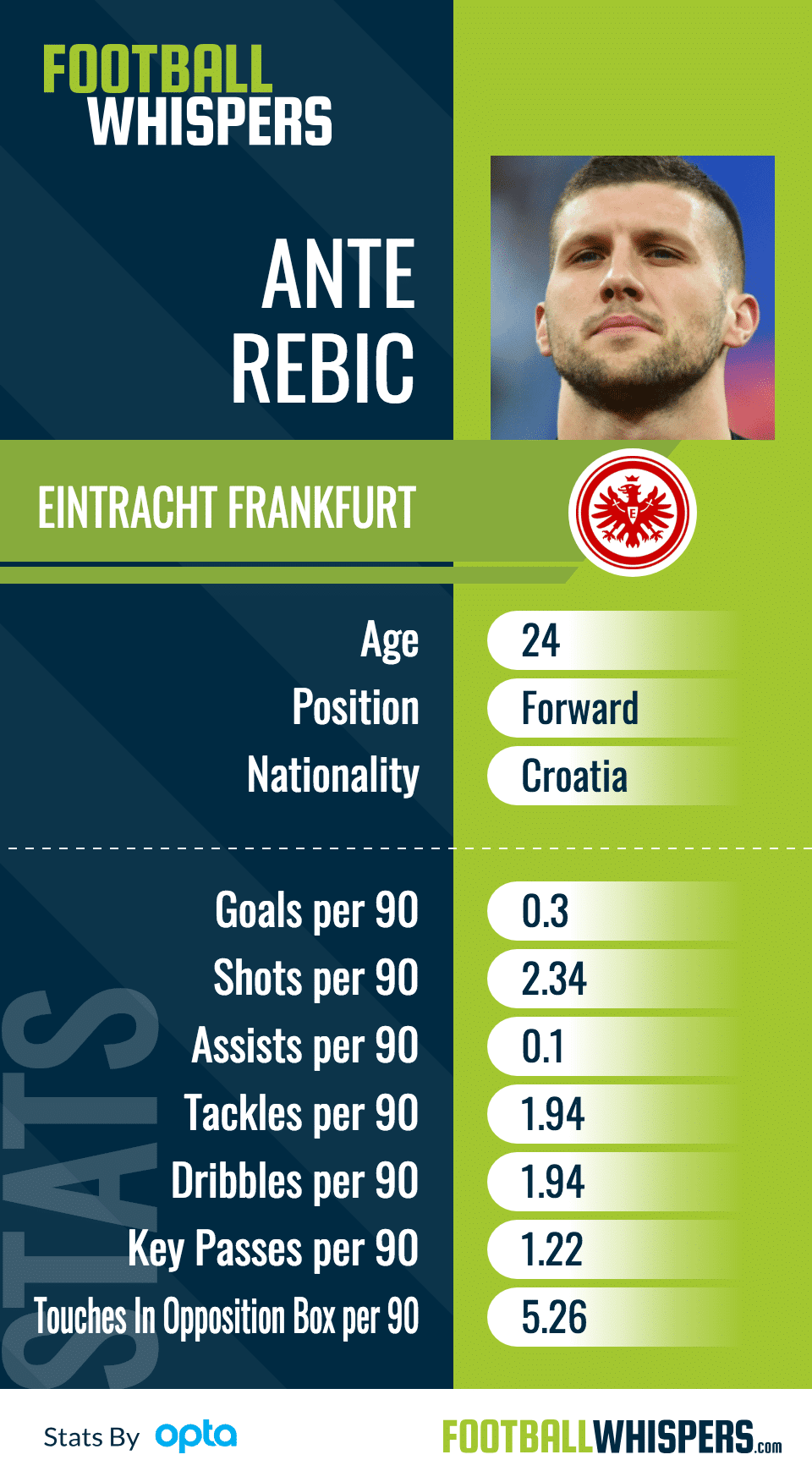 How much would Ante Rebić cost?

Reports from Germany suggest that Frankfurt would be willing to part with the man that effectively won them their first German Cup in 30 years for a cool £26 million. And considering the fact that the striker signed a three-year contract when he signed for the club permanently just back in December it makes sense that the Bundesliga side would demand a top price.

However, Frankfurt aren’t nearly as stubborn as they’d like to think they are in the transfer window and anything resembling the value quoted would propose a fee that completely outweighed anything they’ve received for a player to date. If the club’s favoured goalkeeper, Kevin Trapp, could be sold to PSG for a reasonable £8 million then Rebić will most likely go for far less than the reported figure.

The odd thing about this transfer rumour is undoubtedly the fact that Tottenham do in fact have a number of options for their left-wing or no.9 positions. On the left they have the dependable Heung-min Son, followed by the young and exciting Georges-Kevin N'Koudou. And if injuries really became an issue the likes of Dele Alli, Lucas Moura or Erik Lamela could fill in for an extended period of time.

Similarly, in Harry Kane Tottenham already have one of the best forwards in the world and have the somewhat reliable Fernando Llorente in reserve. And if Mauricio Pochettino isn’t entirely convinced by that strength in depth then he could always turn to the returning Vincent Janssen.

Sure, a number of these players may end up leaving the club this summer and as such a player like Rebić may then be entirely necessary, but until then there doesn’t seem to be a whole lot of space for an exciting, albeit inconsistent goalscorer in this Tottenham side.