When Fabio Borini equalised for Sunderland in the final minute of the 90 against West Ham at the weekend, there was a real sense that the Black Cats could go on to get a rare and invaluable win. The roar of the crowd when the fourth official raised his board to indicate 10 minutes of added time following Billy Jones’ lengthy injury suggested they could yet pull off another great escape.

Four minutes later Sam Byram received a second yellow card and their chances of victory would surely increase. However, this is Sunderland, and this particular side doesn’t have the fight of its past. They mustered just two shots in stoppage time, with a tame Victor Anichebe ‘highlight’ wrapping things up in the Match of the Day footage as the game, much like Sunderland’s season, came to an underwhelming climax.

A point was more than they’ve usually managed this season though, losing 21 of 32 games, and while they have a game in hand over Swansea and Hull a 9-point gap to safety seems unbridgeable for David Moyes' not-so-merry men. So just what has gone wrong this season, more so than in their previous battles against the drop? Here are five damning statistics of their dreadful campaign. 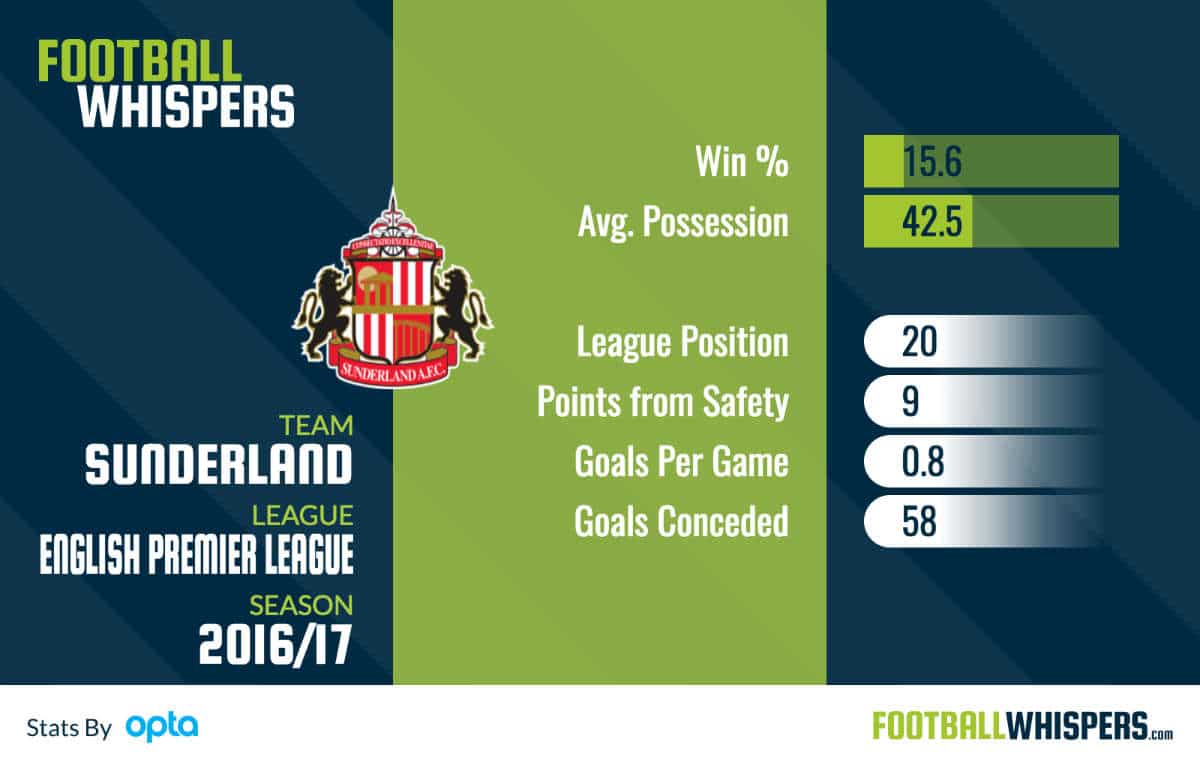 While one would think top scorer Jermain Defoe would represent a decent out ball on the counter, Sunderland just haven’t had the quality to break at speed and supply the striker with the ammunition he needs.

For a side at the bottom of the table that has averaged just 42.5% possession this season, turning defence into attack quickly can be a real weapon, but it’s just not been in this side’s arsenal. They are, in fact, one of a handful of Premier League sides that haven’t scored a single goal on the counter attack all season.

If it wasn’t so clearly an accident, one wouldn’t have blamed Wahbi Khazri for trying to score direct from a corner at the weekend. While Sunderland were outscored from set pieces by Tottenham and West Ham alone last season, netting 15 times from such situations, that threat has completely abandoned them this time around.

Indeed, the Tunisian’s fortuitous goal at the weekend was only their second from set pieces all campaign when excluding penalties. Swansea and Hull, who at least have a fighting chance of beating the drop, have scored 13 apiece by comparison. It’s a remarkable flaw for a side that should surely have focused on recreating the success of last season given their lack of creativity from open play.

While injuries have certainly had an effect on Moyes’ squad selections, the same can be said of any side, so the fact that the Scot has used 31 players this season isn't indicative of a man that knows his best team. Those 31 players have been used across 10 different formations to add to the confusion and lack of coherence in this side, who don’t really have any discernible style of play.

The one constant has been Defoe, who at 34 has managed to stay injury-free to start every league game so far. The fact that no other player has started more than 25 times is unbelievable, and unsurprisingly a record in the league in terms of the fewest number of players to have featured from the off that often. 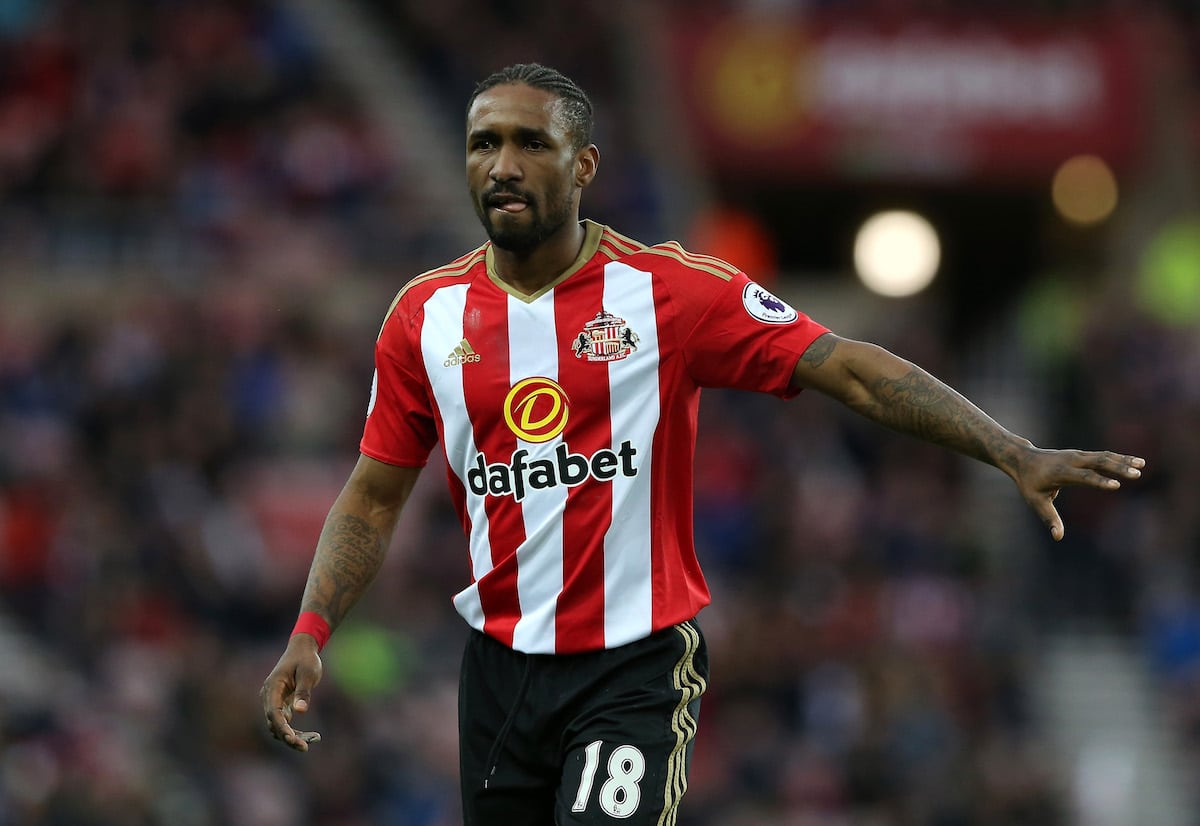 While Defoe’s quality of finishing was always likely to be a feature that Sunderland would aim to exploit as much as possible, the lack of goals from elsewhere has been a huge issue. It’s put great pressure on the England man, and without a goal in eight, it’s something he understandably hasn’t been able to cope with.

That’s not a criticism of the veteran — 14 goals in any relegation threatened side is commendable, let alone this one — rather he’s just had no help. Left-back Patrick van Aanholt, who left for Palace in January, and Victor Anichebe, who scored all of his goals in the space of two games, are Defoe’s closest challengers on just 3 goals. 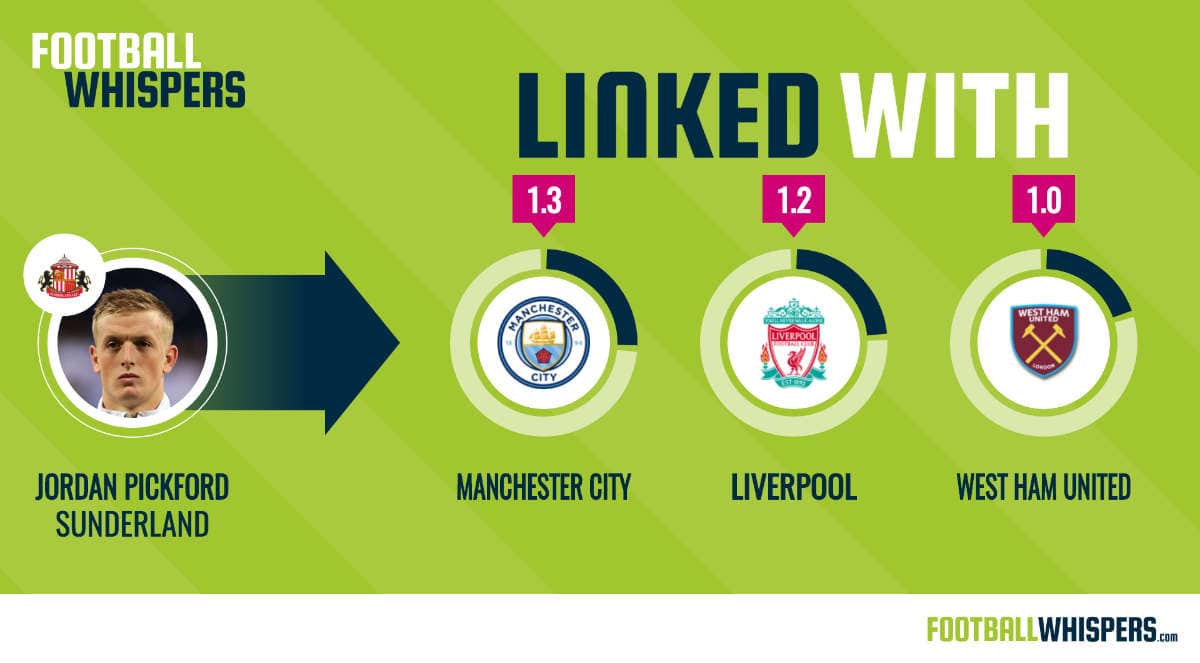 For any side to have so few goalscoring outlets, the ability to offer ample protection to their goalkeeper is an absolute necessity. The fact, then, that Jordan Pickford has made more saves per game than any other Premier League goalkeeper (4.7) highlights just how far short Sunderland have fallen in that regard this season.

The youngster has been a rare bright spark in the dullest of season’s at the Stadium of Light, and were it not for his highly commendable 72.7% save success rate — just ahead of David De Gea among the best in the league — there’s no question what seems an impossibility would have been mathematically so by now. Both he and Defoe will surely find new employers in the summer, and that will leave a sorry bunch to try and return the club to the top-flight at the first time of asking.

Other than that, it’s not been too bad…

KEEP ON TOP OF ALL THE LATEST TRANSFER NEWS: BECOME A FW FAN ON FACEBOOK