Hannover's impressive return to the Bundesliga has gone somewhat under the radar this season.

They were tipped to make an immediate return to the German second tier, with many feeling they lacked the quality to survive in the top flight. Yet with seven games to play they sit in 13th place and are seven points clear of the drop zone.

Survival is very much on the cards and a big reason for that is dominant Senegalese defender Salif Sané.

The 27-year-old is one of Hannover's best performers this term and is attracting interest from across Europe. He is having a standout campaign but his career in German football hasn't always been smooth.

Signed for €2 million from AS Nancy in the summer of 2013, the Senegal international has been a constant in Hannover’s squad over the past five seasons.

During his first campaign he featured 19 times, 16 of which were starts. He netted two goals but more impressive were his 1.8 tackles, 2.4 interceptions and 4.4 clearances per game. He also averaged 0.5 blocks a match, in terms of raw numbers he performed well.

However, Hannover struggled and head coach Mirko Slomka was replaced with Tayfun Korkut.

He wasn't convinced by Sané and one factor may have been his discipline. In the opening 12 rounds of the season he had racked up five yellow cards and on match-day 14 was sent off.

Under Korkut Sané played just five times. He was moved between midfield and defence, and eventually to the substitutes' bench.

Off the pitch there was trouble too. Ahead of a clash against Eintracht Frankfurt Sané arrived late to a team meeting and was dropped from the squad. His reaction was to take an unsanctioned holiday, when he returned he was sent to play with Hannover’s reserve team in the fourth tier.

Such an incident would spell the end for a player at many a club, and Hannover were keen to move Sané on. Instead he dutifully played his football with the second string and waited for his chance to return to the first-team squad.

Several months passed but on December 13, 2014, he was included in the Hannover side to face Werder Bremen. The game ended 3-3 yet Sané impressed in the nail-biter.

Dirk Dufner, Hannover’s sporting director at the time, told the German magazine Kicker: “We were not surprised [about his performance]. Against Bremen you could see his full potential, we hope that he can now show it on a regular basis.”

Sané would go on to feature in 18 games during the remainder of the season. Mostly used as a defensive midfielder he was making 1.8 tackles, 2.1 interceptions and 3.7 clearances per game. He stood out, however, in the air and won 6.8 aerial duels per match.

But while the versatile midfielder was impressing, Hannover was faltering. The side went 13 games without victory, losing seven and drawing six, and in April Korkut was sacked. .

The 2015/16 season was worse, though. The club went through three different head coaches – Michael Frontzeck, Thomas Schaaf and Daniel Stendel – and still suffered relegation after finishing bottom of the table.

Sané showed his tactical flexibility by playing in central defence, defensive midfield and even as a playmaker as the various Hannover coaches tried to stabilise a ship that was destined to go down.

Plenty of offers arrived for Sané that summer and he wanted to leave the club. But Hannover’s president Martin Kind was adamant he would be needed to repair the damage and help the side to return to the Bundesliga.

Die Roten were one of the favourites to make an immediate return to the top flight but the club struggled with the transition. Sané remained one of the team's better performers but his disappointment at playing in the second division was evident on a number of occasions.

On match-day four Hannover were down 2-0 against Dynamo Dresden. A frustrated Sané was provoked by Dynamo’s Stefan Kutschke and reacted by slapping the striker and then grabbing hold of the referee. He was banned for four games, of which his side won three and drew one.

Despite that upturn in form, Sané soon returned and helped the club to a second-place finish and promotion. Escaping 2.Bundesliga isn't easy. There is little separating it from the German top tier which means bouncing straight back up can be very difficult.

However, those who do achieve it are often competitive on their return, as Hannover have proven. 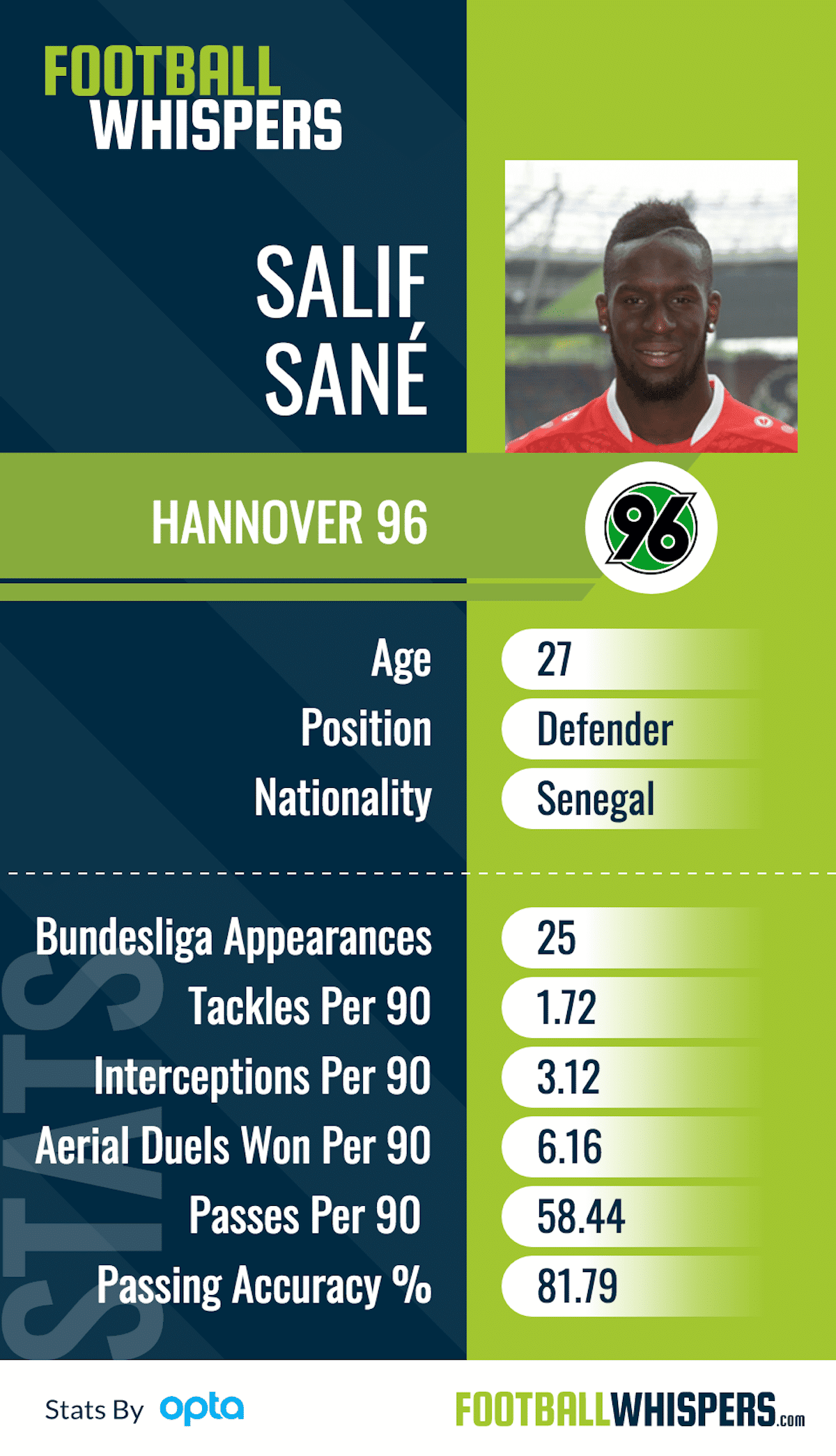 The backbone of their success this term has been Sané, who has matured into an excellent centre-back. He has played 25 times, netted his almost mandatory two goals for the season, has won 6.2 aerial duels per game, made 1.7 tackles, three interceptions and a whopping 7.6 clearances. He is in the form of his career and at 27 years old is coming into his peak years.

Sané is strong on and off the ball and standing 6ft 4ins it's little surprise he is rarely beaten in the air. He has a buyout clause of around €11million which is expected to be triggered this summer and the big guns are already circling.

He's been linked with a move to Premier League clubs – Tottenham Hotspur were supposedly interested in January – while Bundesliga sides, including Borussia Dortmund and Schalke, are also keen.

Sané's time at Hannover appears to be coming to an end. The club attempted to force him out early on while he tried to engineer a move away years later. Yet on this occasion, if he does depart, it's likely to be a deal that finally suits all parties.