The World Cup in 2002 was memorable for many reasons. For one, it served as the setting for Ronaldo’s triumphant comeback after missing two years following a horrific injury.

It was also the fifth World Cup won by the great footballing nation of Brazil, who remain the most successful country in terms of World Cup wins.

For England fans, the 2002 World Cup will always be remembered as the tournament where David Seaman was famously lobbed from a Ronaldinho free-kick struck from improbable range, at an unlikely angle. 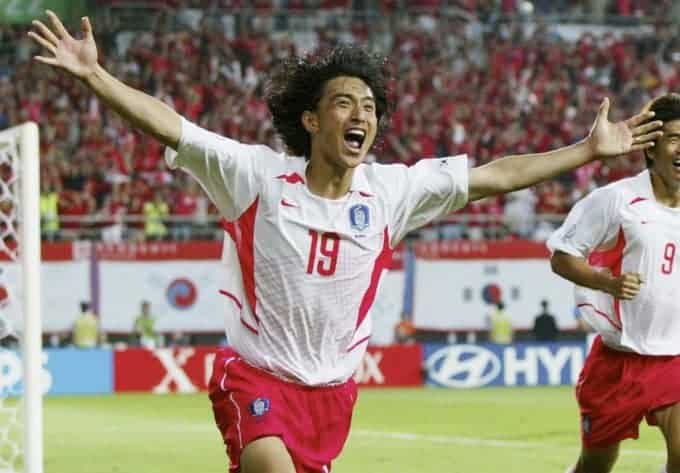 On top of that, the 2002 renewal of FIFA’s flagship event will always be remembered as the first World Cup in Asia. Co-hosted by Japan and South Korea, the World Cup in 2002 was the first to be hosted outside of either Europe or South America. When the first ball of that first game was kicked, history was made.

History was also made for another reason. The 2002 World Cup was the first to be played in two separate countries, with Japan and South Korea sharing the responsibility of hosting football’s biggest competition. Of the 24 stadiums used, 12 were in Japan, with the other 12 in South Korea.

Hosting the World Cup instantly puts the pressure on, as it's always expected that the host nation will perform well when surrounded by the comforts of home.

Both Japan and South Korea, despite what many predicted, shouldered the pressure, faring well, especially early on in the competition.

The South Koreans made a winning start of match-day one, beating Poland by two goals to nil, thanks to strikes from Yoo Sang-chul and Hwang Sun-hong, both of whom played their club football in Asia and were thus virtually unknown by the wider footballing audience.

In fact, South Korea’s preferred XI was largely made up of unknown quantities as far as the rest of the world were concerned. Only two players playing outside of Asia featured in the first game, one of which was Manchester United’s Ji-sung Park. The team was also managed by famous Dutch manager Guus Hiddink, and with such leadership, the Tigers of Asia could flourish.

Following their 2-0 win over Poland, the South Koreans went on to draw 1-1 with the USA, before causing a real upset on match-day three, beating Portugal by a goal to nil, courtesy of the Premier League man Park, who scored one of the goals of the tournament when chesting the ball down deep at the back post, before neatly cutting inside the defender with his right foot, then firing beyond the helpless Vítor Baía with his left. 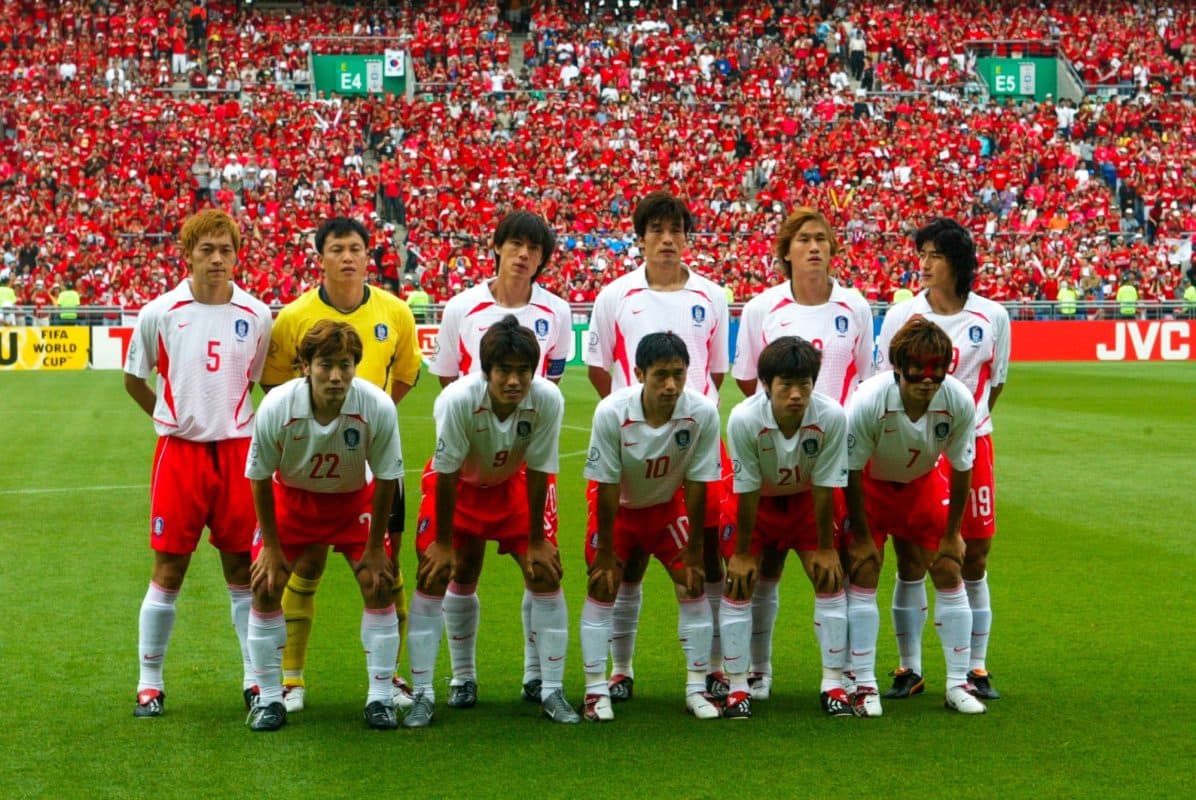 With seven points, the unbeaten South Koreans had done enough to advance to the knockouts as group winners.

For the Japanese, it was a similar story. They too showed that they would be no easy opponent on home soil.

Managed by Frenchman Philippe Troussier, who just 12 months earlier had gotten Japan to the final of the FIFA Confederations Cup, the Japanese had a similar set up to their co-hosts in that they lacked players playing in the big European leagues.

At the time of the 2002 World Cup, Japan’s team mainly featured players playing in Asia, with only two who’d already ventured into European club football. More would make that step after the tournament.

First up, the team nicknamed Samurai Blue met Belgium, and although they came from a goal down, they may have been disappointed with a draw. After all, thanks to a goal from Junichi Inamoto, who would later go on to play for several teams in Europe such as West Brom, Galatasaray and Frankfurt, they held the lead until the 75th minute. Still, a point wasn’t the end of the world.

Their match-day one draw turned out to be the platform from which the Japanese could build as they went on to beat Russia on match-day one, with Inamoto again starring as he scored the only goal of the game. Match-day three saw them record a relatively simple 2-0 win over Tunisia, and with that, they topped the group.

For Japan, the early promise quickly faded, turning into despair when Turkey beat them by a goal to nil during the Round of 16.

However, the South Koreans kept going. First, they beat the three-time world champions Italy, before dumping the Spanish out of the competition too. In doing so, Hiddink’s men set up a clash with the always feared Germans, who would prove too much in the semi-final, though their victory was a narrow one, Michael Ballack scoring the only goal of the game in the 75th minute.

By reaching the final four and earning a place in the third place play-off, where they’d meet Japan’s conquerors Turkey, the South Korean players had done their nation proud, along with the Japanese, creating an altogether more positive view of football on the Asian continent.

However, there was no shortage of controversy caused by the South Koreans on their way to reaching the final four.

When they beat Italy in the Round of 16, the South Koreans made history by becoming the first-ever Asian country to reach the semi-final of the World Cup. A remarkable achievement, especially for a country lacking in the level of footballing history enjoyed by many of the European and South American nations.

However, in making history, the South Koreans caused controversy, and at the same time, made something of a disgruntled enemy in the Italians, who were beyond outraged at some of the decisions during the game.

A game of dodgy decisions

From the start of the game, the Tigers of Asia tried to push forward, and their attacks were causing problems for the Italians, some of whom received early bookings. Following some jostling in the box, referee Byron Moreno then awarded a penalty for the co-hosts, a penalty which was decidedly soft. Don’t forget this was 2002 when tussling and shirt-pulling in the box frequently went unpunished.

Nevertheless, the South Koreans had a golden opportunity, and it was down to Ahn Jung-Hwan to take advantage. The forward stepped up somewhat tentatively and the wily Gianluigi Buffon was equal to his strike, saving low to his right-hand side.

The team in blue steadied the ship and went ahead when Christian Vieri scored after 18 minutes, but things quickly went downhill for Giovanni Trapattoni’s men.

Fighting to get back into the game, the South Koreans went crashing into challenges all over the pitch and seemingly did so out of sight of referee Byron Moreno, who failed to penalise a number of blatant fouls. The game continued in this vein.

The fouls seemingly increased in severity and yet the referee continued to keep his red card tucked away. After a particularly wild challenge on Gianluca Zambrotta in the second half, Italy were forced to make a change. 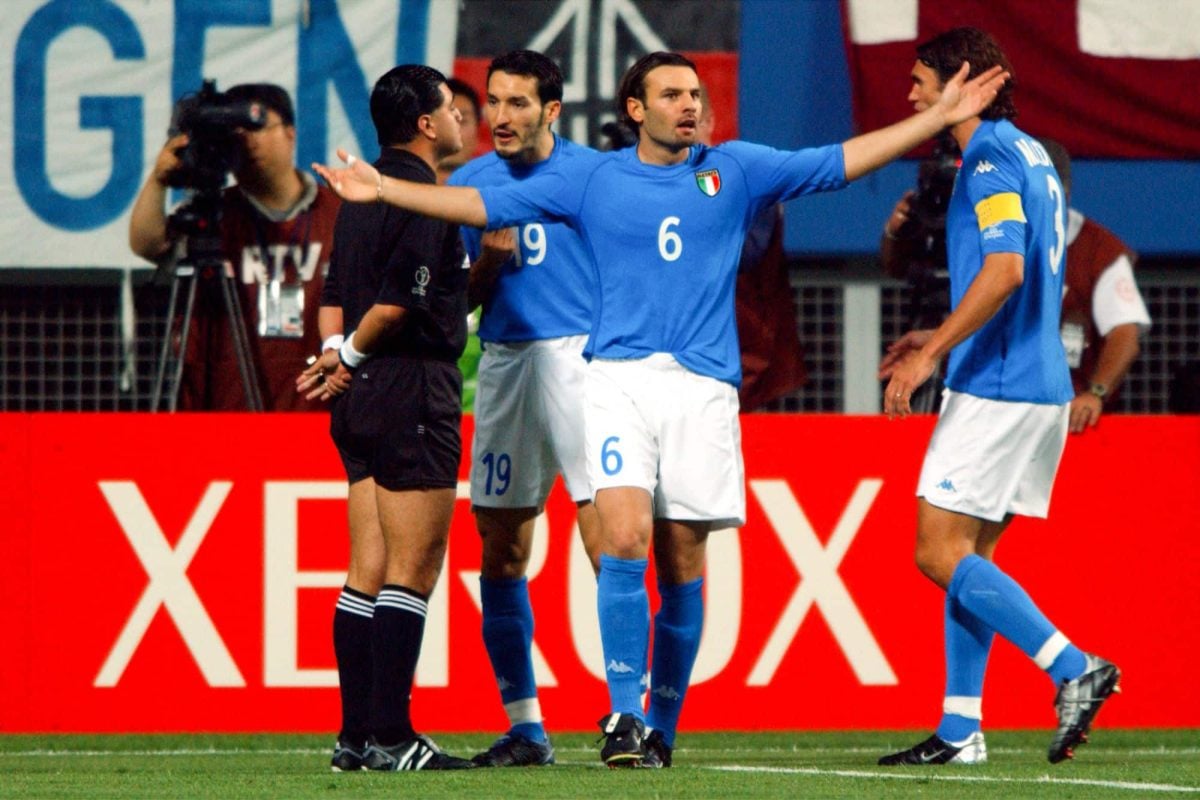 With time running out and most of the decisions seeming to go against them, the Italians found themselves defending on the edge of their own box, when a poorly hit ball over the top deflected off an off-balance defender, falling at the feet Seol ki-Hyun, who rifled into the net.

Into extra time the game went, and with the Golden Goal rule in place, it would be a tense extra period, especially for the Italians, who continued to be plagued by the decisions of Byron Moreno. One such incident saw Francesco Totti fouled in the South Korean penalty area. Yet no penalty was given, and to heap further misery onto Gli Azzurri, Totti was booked for diving, picking up his second yellow card and thus his marching orders.

There was then a very dubious offside call given against the Italians, who looked sure to score had the flag stayed down.

Finally, after 116 minutes, the Golden Goal came, and it came via the head of none other than Ahn Jung-Hwan, who’d missed from the spot nearly two hours earlier. From villain to hero in an absurd game. Prior to the World Cup, the forward had been on loan at an Italian club, though he swiftly had his loan terminated and never played in Italy again. Instead, the Round of 16 saviour played in both France and Germany for Metz and MSV Duisburg.

Whether you believe it was blatant corruption or simply a horrendously incompetent display of refereeing, one thing’s for sure, and that’s the fact that the Italians were incredibly hard done by. The South Koreans, who remained heroes on home soil, were fortunate to progress past the first knockout match of the competition, there can be no denying that.

Following what is one of the most questionable refereeing performances of all time, certainly on the world stage, an incredibly large number of complaints came raining down on FIFA.

Unfortunately for the co-hosts, the controversy didn’t end there, as they were once again embroiled in scandal during that quarter-final clash with Spain.

The football played was fast and furious, much as it had been against the Italians, and although the referee did a better job in terms of correctly punishing fouls, some contentious decisions were still made. The Spanish had two goals disallowed, much to the disapproval of their players. 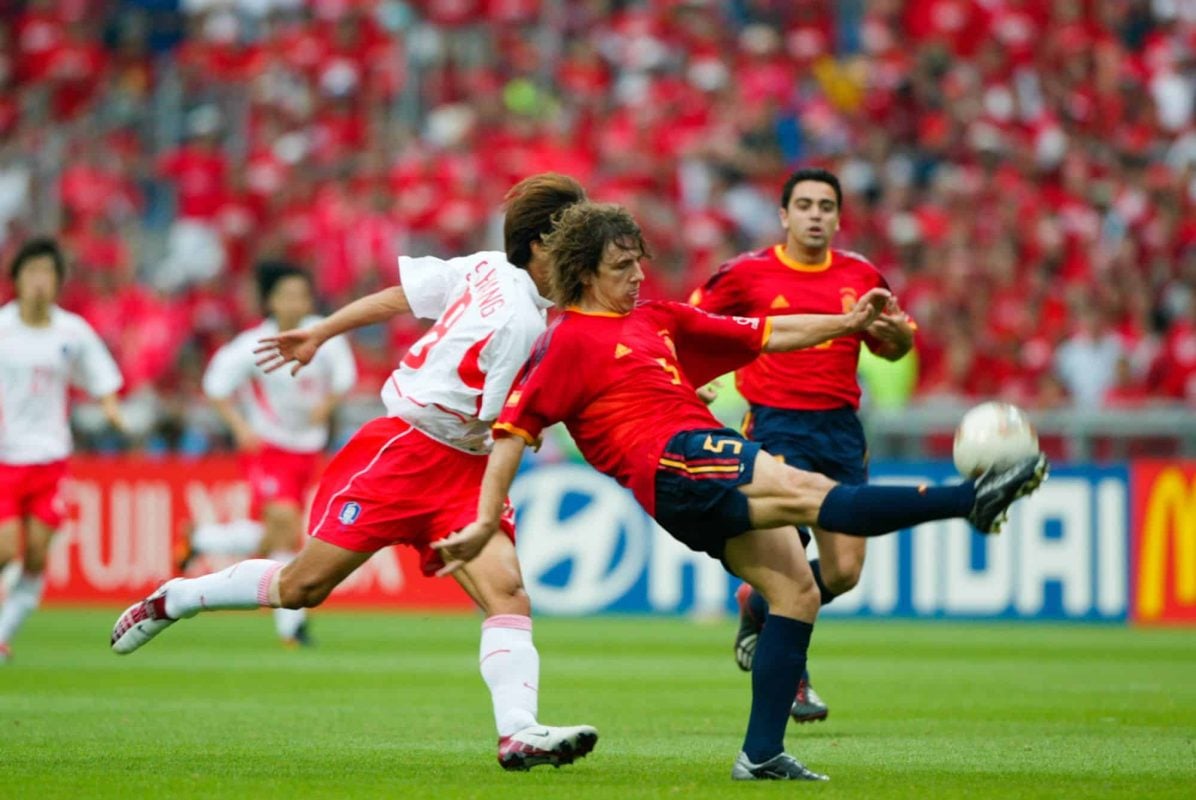 The game finished 0-0, and with extra time failing to provide a winner, to penalties it went. It was tight, it was tense, it was edge-of-the-seat stuff. Eventually, the South Koreans prevailed when Hong Myung-Bo scored following Joaquin’s miss.

After the game, as had been the case after the Italy game, there were calls of match-fixing and corruption. In particular, the Spanish media went after the officials, stating in no uncertain terms that they’d allowed the South Koreans to profit. In addition, with his nation on the way home, Spanish defender Iván Helguera famously branded the match as “a robbery”.

The 2002 World Cup was very much a competition that introduced the wider world to Asian footballing delights. Both host nations provided moments of brilliance, but the tournament will always, unfortunately, be tainted with the memory of a catalogue of bizarre refereeing decisions, especially in Daejeon on the night Italy met South Korea.