While none of us is likely old enough to remember witnessing the 1958 World Cup, we can still read about it. And there was something extra special taking place during the tournament in the form of Just Fontaine. As you’ve seen already, this was the event where Just Fontaine managed to hit the back of a net a staggering 13 times. At the time, these were the most goals scored by any individual during a single World Cup tournament. And guess what? This record is still standing as we are writing this in 2022.

So of course, the achievement of Fontaine that year was something that many would have thought to be impossible. That’s because people already thought that a record was set in the previous World Cup that would never be beaten. As it happens, in the 1954 World Cup, the Hungarian striker, Kocsis, managed to score 11 goals during the event. But hey, those figures clearly didn’t deter Fontaine or make him doubt his abilities. 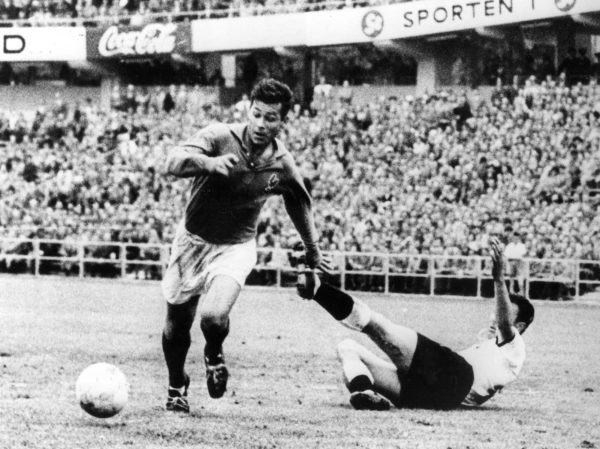 And when he played for France as their main striker during the 1958 World Cup, Fontaine entered a whole new realm of football. Fontaine put together an average of 2.17 goals per game when all was said and done, which is of course, simply incredible. But it wasn’t enough for France to win the tournament, as they bowed out to Brazil in the semi-finals.

Nevertheless, we can still look back and marvel at Fontaine’s World Cup adventures in 1958, which is precisely what we will do now.

Fontaine’s goals during the 1958 World Cup

It would be an injustice to talk about the 1958 World Cup without taking you on the journey of Fontaine’s goals. After all, he does hold the all-time record, so we may as well honour what he was able to achieve. And because of his performance in the tournament that year, Fontaine has been named by the great Pele in 2004 as one of the ‘125 Greatest Living Footballers’. This was back in 2004, as you can see, but at the time of writing, Just Fontaine is still going strong at 89 years of age.

That’s right – you can still talk to the man behind the legend in person if you were fortunate enough to get the chance. But we’re not here to talk about the great life of Just Fontaine – we’re here to marvel at the string of goals he put together in 1958. So let’s get started.

In typical World Cup fashion, the 1958 tournament started with the group stages. For this tournament, there were 4 groups in total, and France was placed in group 2. And their opening game was against Paraguay. Eager to get off to a good start in the competition, France really did put on a show in this one. Amazingly, the goal against Paraguay consisted of 10 goals in total, with Fontaine netting a hat-trick for France in the process. This meant that Fontaine actually scored 30% of the goals in this ten-goal thriller, just to give some perspective on how he started the competition. 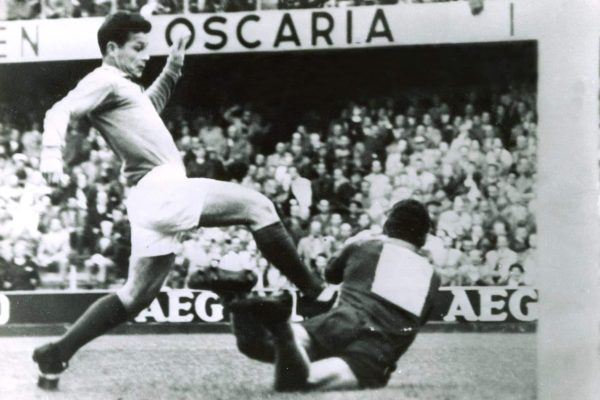 Believe it or not, France was not expected to beat Paraguay by such a margin. And prior to the match, it’s not like Fontaine was a globally renowned striker. In fact, the guy had only sporadically played for the French national team in the years prior. However, it’s fair to say that he was first on the team sheet following this opener. His goals helped France to overcome a 3-2 deficit in this match too, which may not have been possible if Fontaine didn’t work his magic out there on the pitch.

Okay – 3 goals and 3 points for France, that’s a pretty good start for Fontaine, right? His name was already being whispered all around the host nation of Sweden. And his name was starting to make waves on a global scale too. Of course, because of his performance in the opening game, he stepped up to the plate once again when France played Yugoslavia. Fontaine wasted no time in exerting his current form in the game either, as he managed to score at the 4-minute mark to give France the lead. 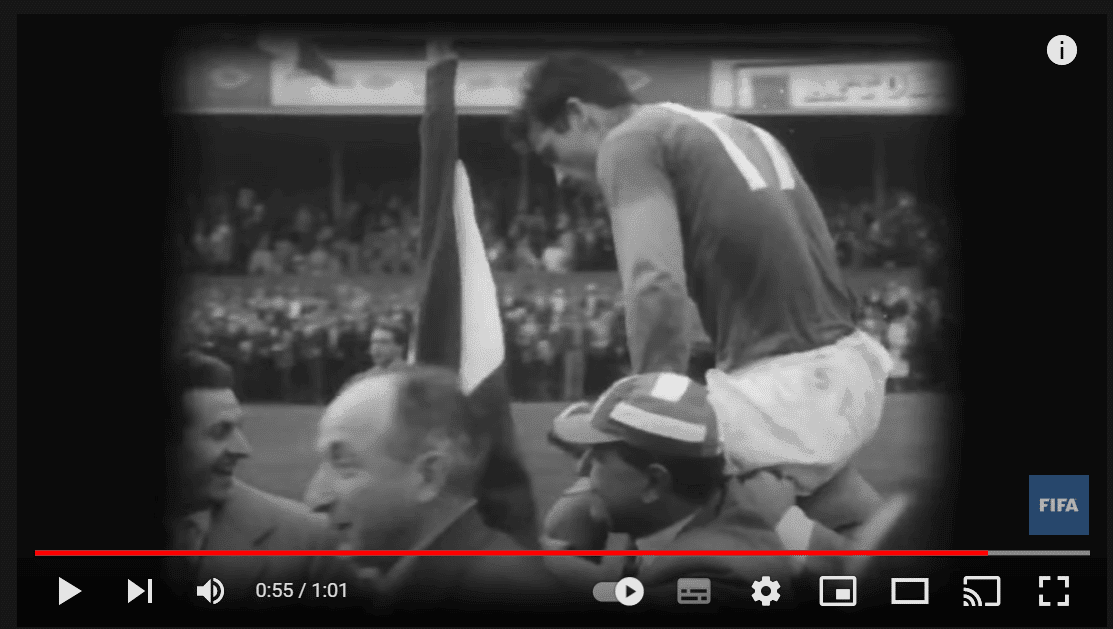 France then went 2-1 down in the second half, but Fontaine once again came to the saviour of France by grabbing an equalizer in the 85th minute. Fans were ecstatic that France had seemingly stolen a point from a game that they looked certain to lose. But even Fontaine couldn’t get France across the line here, and Yugoslavia broke French hearts by scoring in the 88th minute. France subsequently lost the game by a score of 3-2, yet Fontaine kept his tally of goals scoring – taking it to 5 following the conclusion of this one.

When France went up against Scotland, because they had just lost to Yugoslavia, this suddenly became a must-win match if they were to advance to the knockout stages. At this point, all teams actually had a chance to advance to the knockout stage of the competition – even Scotland who had just 1 point. So, with a must-win game about to be played, who else would lace up their boots to help France advance? Of course, it had to be Fontaine! But he did have help in this one, much as he did for the other games in the tournament.

France was blessed with a prolific duo in the form of Fontaine and Kopa, and as it happens, both of these guys managed to find the back of the net for France in this match. Unlike Fontaine, however, Kopa played as an attacking midfielder, but he could certainly strike a football well. And the goals came from these two in the 22nd and 44th minute, with Fontaine scoring the goal that would take France up by 2-0.

Because France won the match, they were able to advance to the knockout stages of the World Cup. Yet already, Fontaine had 6 goals to his name, boasting a 2.0 average since he participated in all three openers.

France was given a relatively easy draw for the quarter-finals stage. Northern Ireland managed to come through a group consisting of West Germany, Czechoslovakia, and Argentina. While this was somewhat unexpected, facts were facts, and the French had to beat Northern Ireland for a spot in the semi-finals of the 1958 World Cup. France was able to destroy Northern Ireland in this one, taking the win by a score of 4-0. Yet they didn’t find the back of the net until the stroke of half-time, and the scorer wasn’t Fontaine. 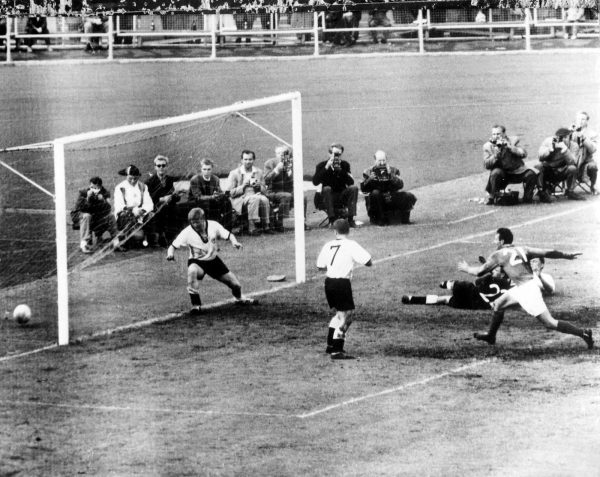 But come on now, you didn’t think that Fontaine would miss out on the goal-scoring action, did you? Fontaine clearly wanted to show the rest of the major teams in the competition what he was capable of. He went into overdrive for a period of around 10 minutes, which is where he scored in the 55th and 63rd minutes. Of course, this was pivotal as it gave France a 3-0 lead with just over 25 minutes on the clock. And the final goal came in for France at the 68th-minute mark, creating an insurmountable lead.

The game was wrapped up with a final score of 4-0, and this took Fontaine’s total tournament tally to 8 – maintaining his 2.0 average per game.

Now came the biggest test of the tournament. France was going up against the red-hot favourites in the form of Brazil, and Fontaine managed to find the net at the 9-minute mark to get France on the scoreboard here. But can you believe it, this wasn’t even the opening goal! The Brazilians scored in just the 2nd minute courtesy of Vava, so it was a huge positive for Fontaine to go and level things just 7 minutes later. However, that’s about where the positives ended for the French, and for Fontaine in this particular match.

Fontaine got a taste of his own medicine when a certain player named Pele went on to score a hat-trick during the game. France ultimately lost this match by a score of 5-2, and the dream of winning the title was officially over.

Not happy with missing out on a chance to play in the World Cup finals, Fontaine must have channelled his frustrations in a remarkable manner to prepare for this match. As you can see, this is the game where Fontaine scored the most goals in any single match for the entire tournament, as an individual player.

He netted 4 goals against West Germany to seal a 3rd place finish for France, and the game finished with a final score of 6-3. If you thought that was impressive, Fontaine could have had five – he let Kopa take a penalty during the match instead of himself. So all in all, Fontaine finished with 13 goals and became a national icon.

Will his record ever be beaten? It will take quite some doing!