Even before the game had kicked off, Wayne Rooney was the story. Even before he'd touched the ball, let alone sent it flying past Rüştü Reçber three times, the headlines in the next day’s newspapers were for himself.

Still only 18, and full of infinite promise, Rooney was the star attraction at Old Trafford as Fenerbahçe took on Manchester United in the Champions League Group stage. It was his first appearance for the club, and in a competition he’d never played in before – the most demanding in Europe – yet he made it look so effortless.

Even at such a young age, Rooney was never overawed by the big occasion. He simply thrived on the chance to show off his precocious talents to an expectant audience. They’d come to watch their club, but also to get a glimpse of the wonderkid; the most expensive, exciting and talked-about teenager in world football.

He didn’t disappoint. United beat their Turkish opponents 6-2, with Rooney claiming a hat-trick and an assist on his debut. Fenerbahçe didn’t know what had hit them, other than a swaggering young striker for whom there were seemingly no limits. A boy built like a man. A wrecking ball with a receding hairline.

Rooney’s last competitive action had come three months prior, in the quarter finals of Euro 2004, when he limped off midway through the first half against Portugal having been caught by Jorge Andrade. With him went England’s hopes of glory as they lost on penalties.

He’d been outstanding that summer, terrorising experienced defenders and scoring four goals in the group stage as he earned a place in UEFA’s team of the tournament. A battle for his signature ensued, with Newcastle United and Manchester United the keenest to prise him away from his hometown club.

The exit was no doubt messier than Rooney would have liked, with a transfer request submitted to force Everton’s hand, but a £27million move to Old Trafford was finally completed on deadline day. He still had to bide his time before walking out onto the pitch as a United player, however, as he worked his way back up to full fitness.

It was late September when Rooney’s chance came, insouciantly chewing gum as he lined up in the number eight shirt alongside his strike partner Ruud van Nistelrooy. The prolific Dutchman was a very different kind of player, and would be eased out of the picture over the next couple of years as United headed in a new direction, with Rooney and Cristiano Ronaldo leading the way.

The sense of anticipation when the ball arrived at Rooney’s feet was palpable. The volume rose and so did the crowd. His instinct was always to charge forward, going it alone, as panicked defenders backpedalled. An early chance was spurned, he curled the ball over the bar from a tight angle having sent Rüştü sprawling, but it wouldn’t be long before he was on the scoresheet.

After 17 minutes, with Ryan Giggs having already put the home side in front, Van Nistelrooy sent Rooney through on goal and he made no mistake, firing into the roof of the net to make it 2-0. The supporters chanted his name to herald the first of many goals for a player who would become a United legend over the coming years. It was the beginning of a long and occasionally strained love affair.

He had a second before the half-hour mark. Giggs cut in from the left and laid the ball off to Rooney, who dummied past an approaching defender and arrowed his shot into the bottom corner. He was mobbed by team-mates as thoughts already turned to a hat-trick.

There were a couple more efforts, including one that he should have done better with from a Gary Neville cross, but Rooney wasn’t to be denied. Fenerbahçe pulling a goal back didn’t matter. The night belonged to him and even United’s elder statesman were prepared to demur to the teenager. Rooney told Ryan Giggs to leave a free kick and then stepped up to curl it into the top corner. 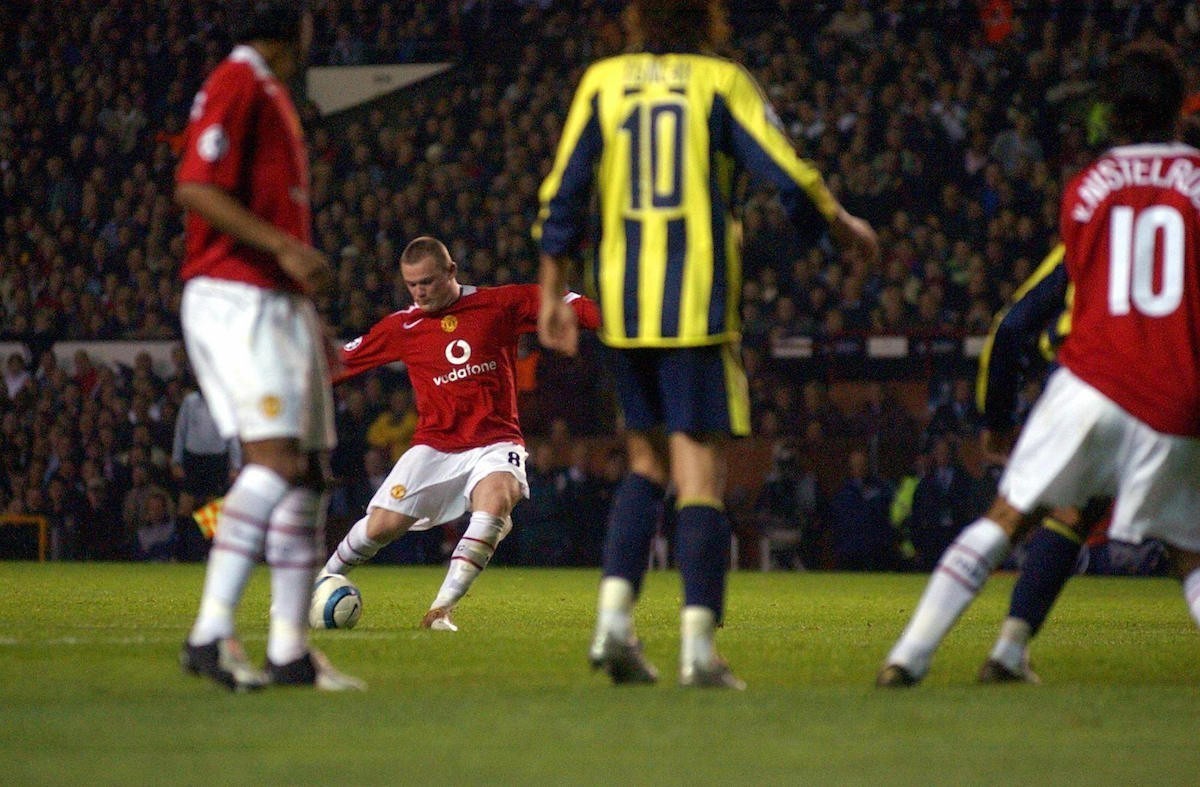 “It’s inevitable,” cried Clive Tyldesley, on commentary duty for ITV, as the disbelieving laughter of Andy Townsend could be heard in the background. “Some things are just meant to be. Wayne Rooney has saved his first senior hat-trick for his Manchester United debut in the Champions League.”

Tuncay got the visitors’ second, while Ruud van Nistelrooy and David Bellion added to the scoreline late on – the latter assisted by Rooney’s flick-on – but these were mere footnotes. The real story, the one that mattered, had already been told. A rampaging Rooney scoring three superb goals to announce his arrival as a United player and potential world-beater.

Still, the evening didn’t go entirely seamlessly. There was the occasional heavy touch and overhit pass as Rooney’s eagerness to impress got the better of him at times. But they were rightly forgotten in the glow of a debut hat-trick. Each goal coming from outside the area.

“I don't suppose I have seen a debut like it,” said Sir Alex Ferguson. “What you saw tonight is the reason why we signed him. And I think he can only get stronger now. We think the boy has great potential and it was a great performance and a great start by him.”

Back then Rooney was still a wonderfully raw talent who needed to be tamed, a street footballer whose natural instincts would have to be suppressed so he could contribute more fully to the team. Under the guidance of the United manager and his coaching staff, a more rounded player would emerge over the coming years but something was lost along the way.

While some of his impetuous edges were smoothed out, his unthinking directness tempered over time, this was Rooney in his purest and most arresting form. Playing with complete freedom, he made it feel like anything was possible.