Middlesbrough were no strangers to a statement signing in the mid-90s. For as much as their chairman, Steve Gibson, has rightly been praised for his loyalty to managers and investment in youth, he was often drawn towards big-name players who could boost the club’s profile.

Promotion to the Premier League in 1995 led to the arrival of Nick Barmby for a record fee, with Brazilian internationals Juninho and Branco joining later in the season. Having consolidated their position in the top flight, more money was shelled out as Emerson and Fabrizio Ravanelli became part of an upwardly-mobile club with designs on European qualification.

These new additions excited supporters and brought a touch of glamour to an ailing post-industrial town. None more so than Ravanelli. The Italian international had just won the Champions League with Juventus, having scored the opening goal against Ajax in a tense final that went to penalties.

An enigmatic character famed for his distinctive hair colour, the ‘White Feather' surprisingly moved to Middlesbrough for £7million. His signing was indicative of an increasing cosmopolitanism that accompanied the advent of the Premier League era. As money and global interest flooded in, foreign imports became ever more common, and not just at the big clubs either.

The summer of 1996 could perhaps be identified as the tipping point, as a once-insular football culture fully embraced the new and exotic options open to it. The thrill of hosting the Euros contributed to this changing atmosphere, as some previously unfamiliar players benefited from the increased exposure to secure moves to England. Some worked out, others didn’t, but it felt like the dawning of a new age all the same.

Ahead of the 1996/97 season players arrived from all over Europe, including Portugal, Spain, Denmark, Turkey, France, Switzerland and the Czech Republic. It was an unprecedented influx that helped to change the face of English football forever more. The technical standard on show rose dramatically, and the emphasis on possession increased.

Many went on to have long and eventful careers in England. A trickle became a flood.

Middlesbrough’s star man was both a prime example of this new trend, and something of an outlier – an established player tempted by a big contract on vastly-inflated wages. It’s rumoured that Ravanelli was paid three times more during his year on Teesside than he had been by Juventus, then the reigning European champions.

While his former strike partner Vialli would be competing towards the top end of the table with Chelsea, a relegation struggle awaited for Middlesbrough and Ravanelli. Little did they realise that that would be the case on the opening day of the season, as Liverpool visited the Riverside in glorious sunshine, watched by a capacity crowd.

“Big-spending Middlesbrough give Premiership debuts today to the two summer signings who have created unprecedented optimism on Teesside,” explained Tony Gubba on Match of the Day.

“Italy’s Fabrizio Ravanelli, the record £7million signing from Juventus, already voted by Boro fans as the most likely to be their Player of the Year. But £4million Emerson of Brazil, a midfield player in the mould of Bryan Robson will certainly challenge for that honour. It’s exciting days at Middlesbrough.” 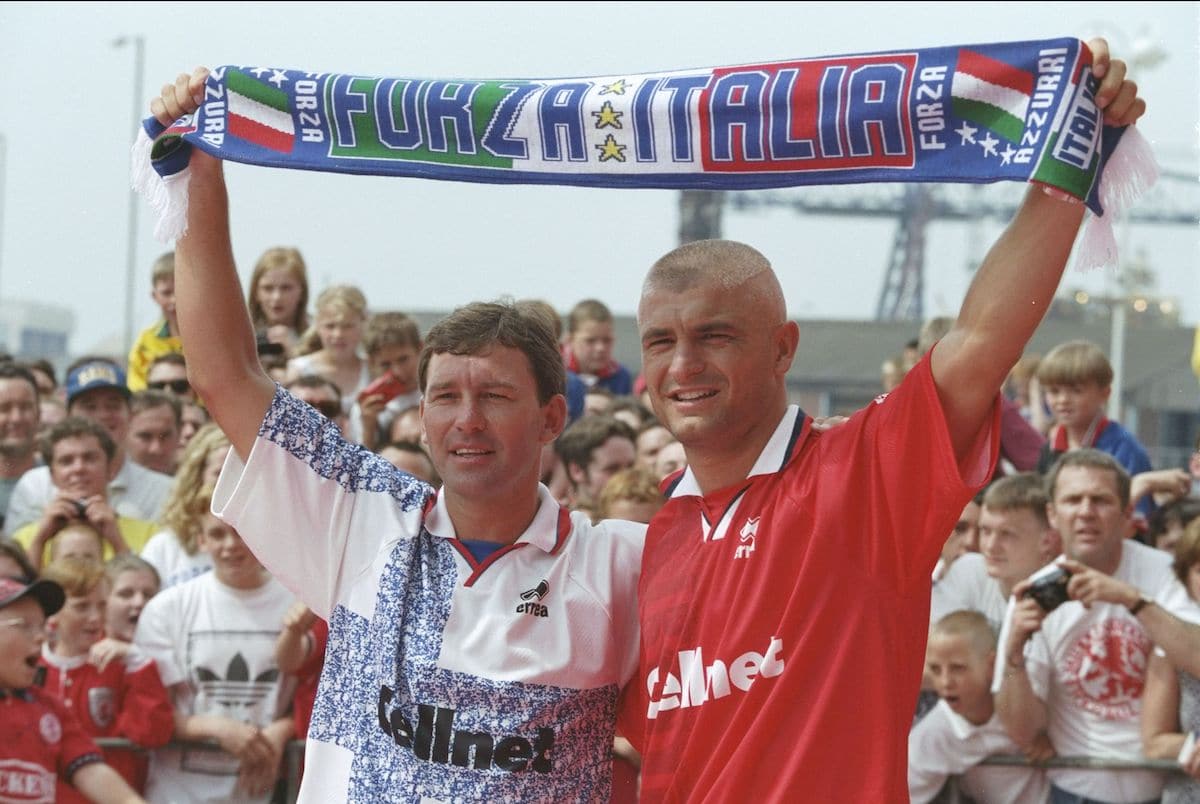 That bright Saturday afternoon in August established the template for what was to come. It showcased the best and worst of Boro – their attacking verve and defensive frailty. A see-sawing match ended in a 3-3 draw, as Ravanelli introduced himself to a new club and league in spectacular fashion by scoring a hat-trick.

Slack marking and poor decision-making at the back cost the hosts, who went behind three times in the match, only for Ravanelli to repeatedly draw them level. Nigel Pearson was culpable for the first, letting Stig Inge Bjørnebye in to score as he mistakenly waited for goalkeeper Alan Miller to come and collect a hopeful flick-on.

A foul on the tricky Juninho enabled Ravanelli to equalise from the penalty spot, thumping the ball past David James with utter conviction. He then whipped up the home fans even further, running along the touchline imploring them to make more noise.

His second, coming after another soft Liverpool goal, was a true poacher’s effort as he slid in to convert Neil Cox’s low cross following a quickly taken free kick. Ravanelli’s celebrations once more displayed his manic passion, while Steve Gibson, watching on from the stands, leapt up to hail the immediate impact being made by his investment.

If only the Middlesbrough defence was anywhere near as effective as their new striker was proving at the other end. Midway through the second half, as two defenders failed to get a touch on Bjørnebye’s cross, an unmarked Robbie Fowler obliged with a simple finish at the far post.

With ten minutes remaining, Ravanelli came to the rescue once more. The ball was eventually forced through to him by the persistence of Robbie Mustoe and Juninho – an unlikely yet effective combination. Ravanelli swivelled and hit his shot quickly, if not cleanly, catching David James by surprise. It trickled into the far corner to the euphoria of the home fans.

Ravanelli should technically have been sent off for twice lifting his shirt over his head to celebrate his second and third goals. An FA directive introduced that summer had specified that doing so would be a bookable offence but the Italian escaped unpunished, his status as a cult hero secured by a perfect debut.

“I was really pleased with our attacking display today,” commented Bryan Robson in a post-match interview to the BBC. “We carved up a team like Liverpool a few times, whereas I felt a couple of the Liverpool goals were bad mistakes by my defenders. We can work on that, and we can improve on that.”

Middlesbrough no doubt worked on their defending but there was scant sign of any progress as they conceded 60 goals in the league that season, the most of any team in the top flight. They fared better in knockout competitions, reaching the final of the FA Cup and the League Cup, but returned empty-handed from their trips to Wembley.

Although Ravanelli proved to be a roaring success, scoring 31 goals in 48 appearances, including another hat-trick in a 6-1 defeat of Derby County, it wasn’t enough to spare the club from relegation.

Middlesbrough’s fate was sealed on the final day but they were left to rue a three-point deduction for cancelling a game against Blackburn Rovers at short notice months earlier, when in the midst of an injury crisis.

Without that costly punishment, they would have survived and Ravanelli may have stayed to burnish his legend. As it was, he departed for Marseille after a couple of games in the First Division, leaving behind memories of when a spirit of adventure and a few glamorous signings had generated the belief that Boro were on the cusp of something special.