Jesse Lingard was always small, slight and wiry. In youth teams he routinely looked like he was playing several age groups above his true level, dwarfed by team-mates and opponents who were already built like adults. The size difference makes some of the pictures from his teenage years in the Manchester United academy seem faintly absurd.

For a long time there were fears that despite his assured technical ability and insatiable desire to improve, a lack of height and strength would prevent Lingard from reaching the top. Doubts persisted that he would simply never develop the physicality needed to survive in the Premier League, let alone at its most successful club.

While others were receiving their first professional contracts, Lingard was left to wait and wonder. United had faith in him but would have to be patient. He was a long-term project, a slow-burner rather than an explosive talent who was going to burst onto the scene at the earliest available opportunity.

Lingard was 21 when he finally made his debut for Manchester United, as they lost 2-1 at home to Swansea City in Louis van Gaal’s first match in charge. It had been a long and occasionally arduous road to reach this point, featuring three loan spells at Championship clubs. They were designed to toughen him up, to help him mature both mentally and physically for what was to come.

The first was at Leicester City as they challenged for promotion. Lingard played infrequently, making five substitute appearances across the course of two months, totalling just 76 minutes of football. Several times he shared a place on the bench with Jamie Vardy, who was struggling to adapt to a higher standard following his move from Fleetwood Town.

It was a frustrating yet character-forming experience for Lingard, who returned to the Manchester United development squad in January 2013. He impressed during that summer’s pre-season tour of Australia and the Far East, scoring four goals in five games, but went back to a peripheral role once the competitive action got underway. 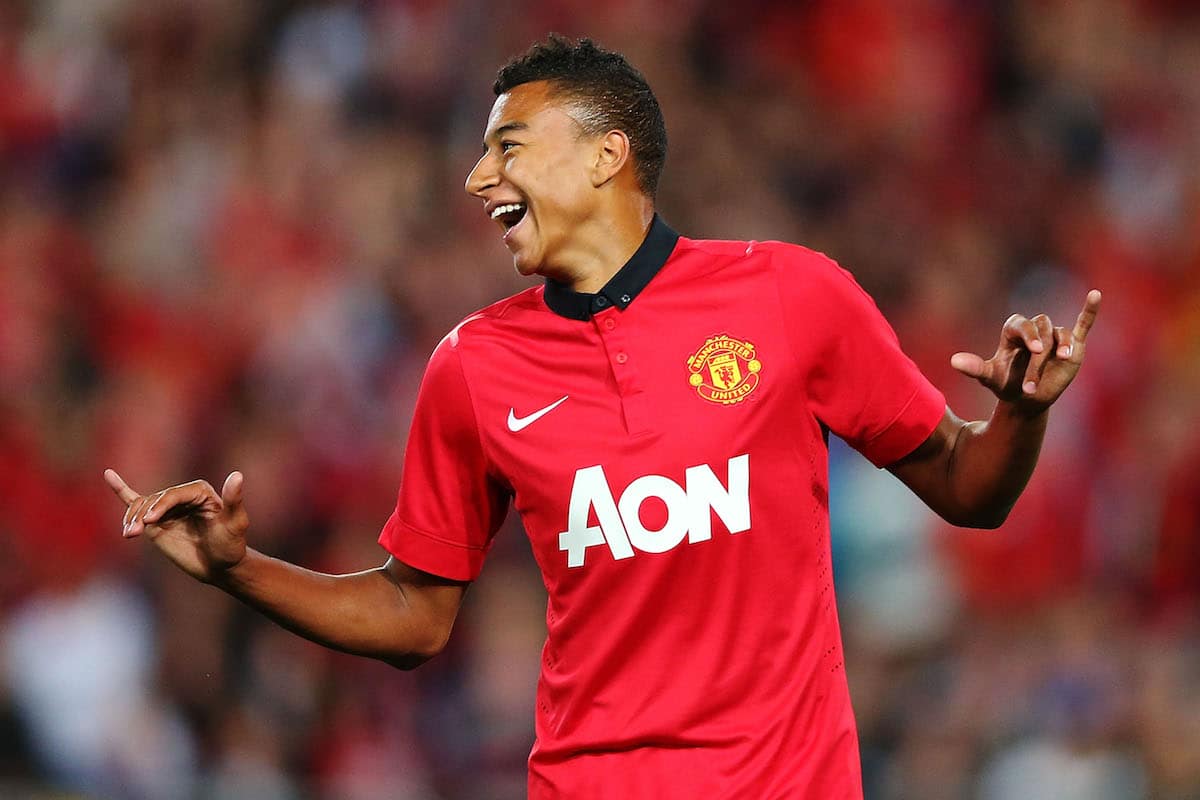 David Moyes sanctioned another loan move, this time to Birmingham City, who were operating under financial restrictions and expected to struggle. Their opening seven games had returned a mere four points and four goals. They hadn’t won since the second weekend of the season.

On the back of a 3-0 loss to Burnley, Sheffield Wednesday were Blues’ next opponents. Lingard, making his first start in senior football, was included as one of four changes. He played as part of a front three, drifting into spaces where would be difficult to pick up. Supporters had little idea what to expect from their new signing but he proved devastatingly effective.

He was off the mark after 20 minutes and celebrated his hat-trick 13 minutes later. Lingard’s first goal showed good anticipation, responding quickest to a rebound after Chris Burke’s shot was palmed out by Chris Kirkland. He was then played through by Wade Elliott and calmly slid the ball under the goalkeeper as he tried to narrow the angle.

Lingard’s third was the best of the bunch. He picked up the ball 30 yards out in the inside left channel and cut inside to find the bottom corner from the edge of the box. He ran towards the Main Stand and slid on his knees in celebration, settling there to bask in the adulation of the crowd and his team-mates. Elaborate dance moves were saved for another occasion.

Most would be more than happy with a hat-trick but Lingard didn’t stop there. His fourth owed much to the trickery and persistence of Burke, who forced his was way to the byline and cut the ball back for a simple finish from close range. Lingard was picked up by Tom Adeyemi and held aloft with a single arm. Shortly after half time, in his first ever start, he had four goals.

Although Sheffield Wednesday grabbed a consolation thanks to Kamil Zayatte, Lingard’s clinical finishing secured an impressive win. Suffering from cramp, he was withdrawn 20 minutes from the end to a standing ovation. His initial month-long deal was soon extended.

It was an important moment in Lingard’s development as he demonstrated, beyond any doubt, his ability to mix it in the men’s game. He’d made a spectacular, and decisive, contribution to a positive result in a meaningful match. The Manchester United first team was still a long way off but significant strides towards it were being made.

“He was just magnificent,” Birmingham manager Lee Clark recalled in an interview with Eurosport last year. “I played him off the left of an attacking three, coming in on his right foot and he was just phenomenal. Not just his goals, his general play.

“Without being disrespectful to some of the players I had, sometimes the problem Jesse had that he was a couple of steps ahead of them. They weren’t always on his wavelength.”

Nothing was ever likely to live up to that sensational debut but Lingard added two more goals and three assists in his remaining 12 games at Blues. He started every single one, entrusted to play a key role in an ever-changing side. His last, away to Wigan Athletic, featured a red card for a forceful tackle on Jordi Gomez after Lingard was aggrieved at not getting a free kick moments earlier. He might have been small but he wasn’t afraid to get stuck in.

Birmingham’s best run of form during the entire season coincided with Lingard’s spell at the club. There were many other contributing factors, including injuries and other loanees returning to their parent clubs, but he played his part in creating a more cohesive team.

While Birmingham stumbled towards survival, which was sealed with a last-minute goal on the final day, Lingard helped Brighton and Hove Albion into the play-offs having been loaned to the Seagulls in the January transfer window. Next season came a stint at Derby County as he recovered from an injury picked up on his United debut. Each added something to the mix.

He’s become a much more consistent and effective player in the intervening years, carving out a significant role for himself at his boyhood club and being heavily involved in England’s run to the World Cup semi-finals last summer. Even though Lingard’s journey to reach this point began well before that memorable afternoon at St. Andrew’s, it was a significant staging post all the same.