Emil Forsberg was one of the most sought-after players in Europe at the end of the 2016/17 campaign. The RB Leipzig attacker, in his debut season in the German top flight, had set the Bundesliga alight, setting up an astonishing 19 goals. He found the back of the net on eight occasions, meaning he finished the season having been involved in a goal every 87 minutes.

Liverpool held an interest in the versatile midfielder which dated back to his Malmö days. José Mourinho reportedly wanted to add him to his squad at Manchester United and he was named as a potential alternative to Ivan Perišić.

Everton have been keeping close tabs on the Swedish maestro since the summer of 2016, after he had played a key part in RB Leipzig winning promotion to the Bundesliga.

The fact the 26-year-old is reportedly unhappy at the Red Bull Arena will no doubt lead to a scramble for his signature. According to SportBild, the RB Leipzig No.10 has been left frustrated with life under Ralph Hasenhüttl this season, with the manager alternating his side on a regular basis.

That, along with injury niggles and greater squad depth, has prevented Forsberg from replicating the form he showed last season. He's assisted just two goals in the league and has found the back of the net only once. His goal involvement has risen to one every 355 minutes.

The report goes on to claim Arsenal, Bayern Munich and Juventus are leading the race to sign him. He has a contract keeping him in Leipzig until 2022 but, as shown with Naby Keïta‘s move to Liverpool, money talks. And with the German side being able to call upon the likes of Bruma and Jean-Kévin Augustin, there's not as much as reliance on Forsberg as there once was.

Is Forsberg worth the risk?

Last season, the versatile forward pulled the strings for the Bundesliga runners-up. But, when looking at his expected goals (xG) and expected assists (xA), it's clear that he was over-performing and such form wasn't sustainable.

Was it a naive to think Forsberg could replicate last season's success? No. There are always players who manage to better their xG and xA stats. Whether they're simply clinical finishers who add value to their shots that the average player doesn't, or they're the ones proving the ammunition for a striker in their form of his life who happens to be finishing off low-quality chances on a regular basis.

The RB Leipzig playmaker could have been one of those players. After all, he's bettered his xA total of 0.85 this season with two to his name already.

However, a concern for RB Leipzig, and those interested in acquiring his services, will be the drop-off in end product. 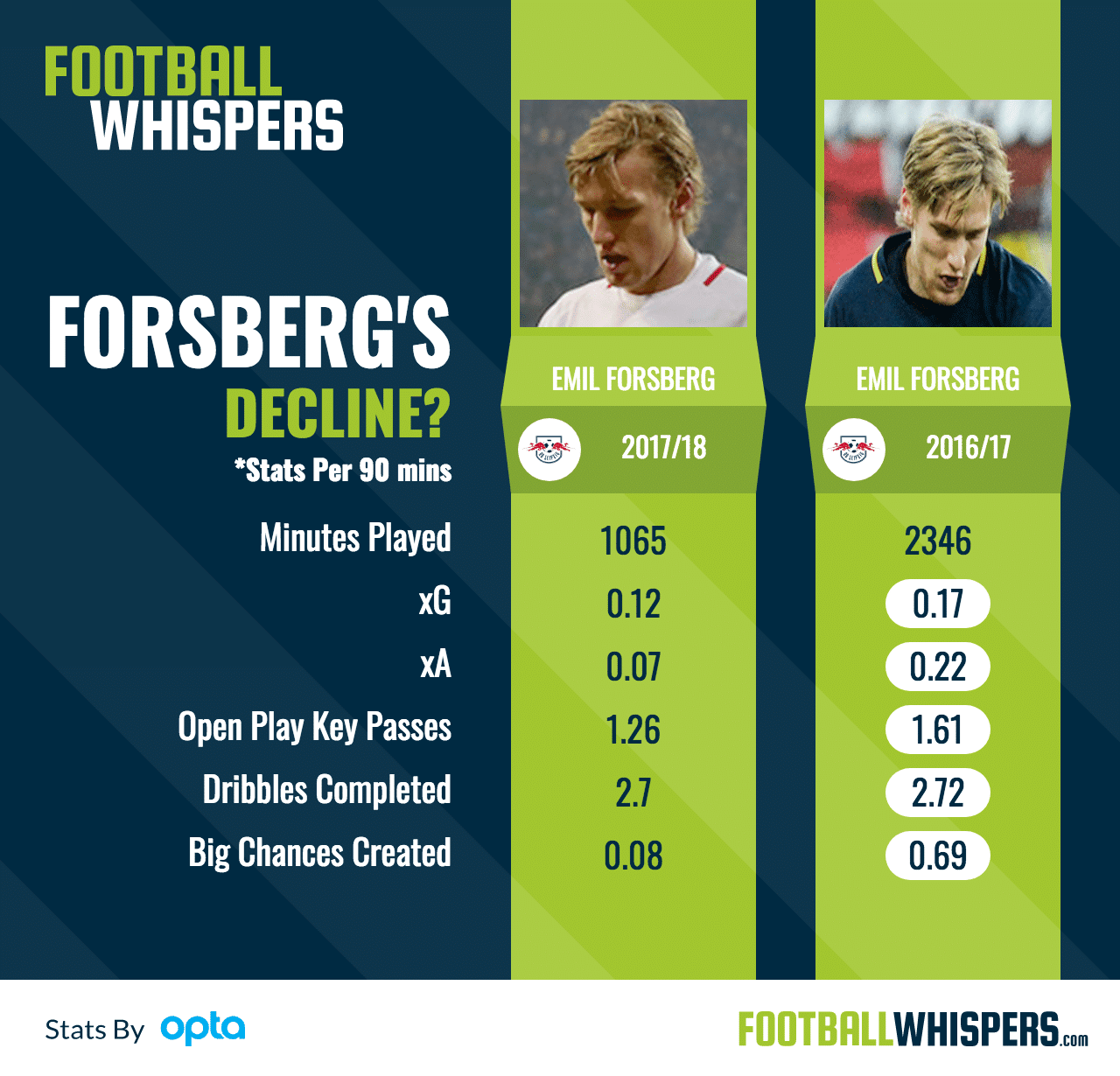 The graphic above compares Forsberg's past two seasons. Granted, he's played over 1,200 minutes fewer in the Bundesliga this time around, but the drop-off in xA per 90, open-play key passes and big chances created is peculiar.

The German team are still in the hunt for a runners-up position, although competition is much more fierce this time around. There's not too much difference in the numbers, though. Last season they averaged 1.9 goals per game, compared to the 1.48 they are managing during this campaign.

They had three per cent more possession in matches last season, but their pass success rate was 0.7 per cent lower and they're averaging 1.9 more shots this term.  There are no glaring reasons for why Forsberg's xA90 has dropped from 0.22, the second highest total in the Bundesliga last season, to just 0.07, 0.40 behind Mahmoud Dahoud who tops the list.

Just like last season, he's operating in the two behind the strikers in RB Leipzig's 4-2-2-2 system. His passes attempted average has stayed roughly the same, as has his dribbles completed per 90 minutes. The Sweden international is being dispossessed, on average, 0.5 more times this term but, again, it doesn't explain why the supply-line has dried up.

There are some suggestions that's he's been ‘found out', and that this is his level now, having regressed back to the mean.

The truth is it's been a period of transition for RB Leipzig. They added new faces to their forward line, forcing Forsberg to familisrise himself with players who are still finding their feet, and they've had to adapt to playing more minutes due to their involvement in Europe. It's hard to find a rhythm without being part of a consistent unit.

He's going to into the summer marker as one of the most under-valued players around, based on this season's performances, meaning one of the clubs interested in signing him could bag themselves a bargain in the current market. On his day, Forsberg is still one of the best playmakers in European football.