As Juventus continue what appears to be a relentless march into history, there will be members of the current side whose names are never forgotten. Gigi Buffon, as captain, leader and perhaps the greatest goalkeeper of all time is undoubtedly foremost among them, but players like Leonardo Bonucci, Giorgio Chiellini and Turin native Claudio Marchisio all deserve their place in the club’s growing pantheon of legends.

Paulo Dybala is doing his utmost to join them, while if Gonzalo Higuaín can continue to lay waste to the idea that he never scores when it matters, he too will carve his name into lore. Make no mistake, this is a team set to win a record-breaking sixth consecutive Serie A title, with the finals of the Coppa Italia and Champions League standing between them and an unforgettable treble.

Then there are those who work in the shadow of those stars, men like Mario Mandžukić and Stephan Lichtsteiner, while Dani Alves used the two-legged semi-final against AS Monaco to show that he could yet steal the limelight from everyone. However, below all of them is a small group of players who will perhaps be only remembered by the most dedicated of fans, marginalised by the sheer depth of talent available to coach Max Allegri.

This is where the likes of Tomás Rincón, Kwadwo Asamoah and Medhi Benatia find themselves, all excellent players in their own right but ones that have found playing time extremely difficult to come by this term. Midfielder Stefano Sturaro and goalkeeper Neto would likely be in the first-choice XI of most other Serie A clubs, while a talent like Mario Lemina is clearly in high demand.

The 23-year-old has been strongly linked with a summer exit, with interest from Arsenal, Chelsea and Leicester City all reported in recent months. All three would unquestionably be able to offer him a large increase on his current contract, a deal that expires in 2020 and which is believed to pay him in the region of €24,000 per week.

However, more than money, Lemina would surely be looking for regular football if he were to leave the Bianconeri. He has made a paltry total of just 14 league starts since joining the club in August 2015, while seeing less than 1100 minutes of action in all competitions this term.

Already behind Miralem Pjanić, Sami Khedira and Claudio Marchisio, Allegri's move to a 4-2-3-1 formation in January and the acquisition of the more reliable and robust Rincón reduced his opportunities further still. Indeed, since the start of 2017, Lemina has just one start to his name and cannot be blamed if he is looking at his options even as he collects his winner’s medals over the next few weeks.

Yet none of that detracts from the fact that the Gabon international remains a highly talented prospect with the potential to develop into a very well-rounded and useful player. Whenever he has been given space by Allegri, he has made the €10 million Juventus paid to sign him outright from Olympique Marseille look like superb value for money. 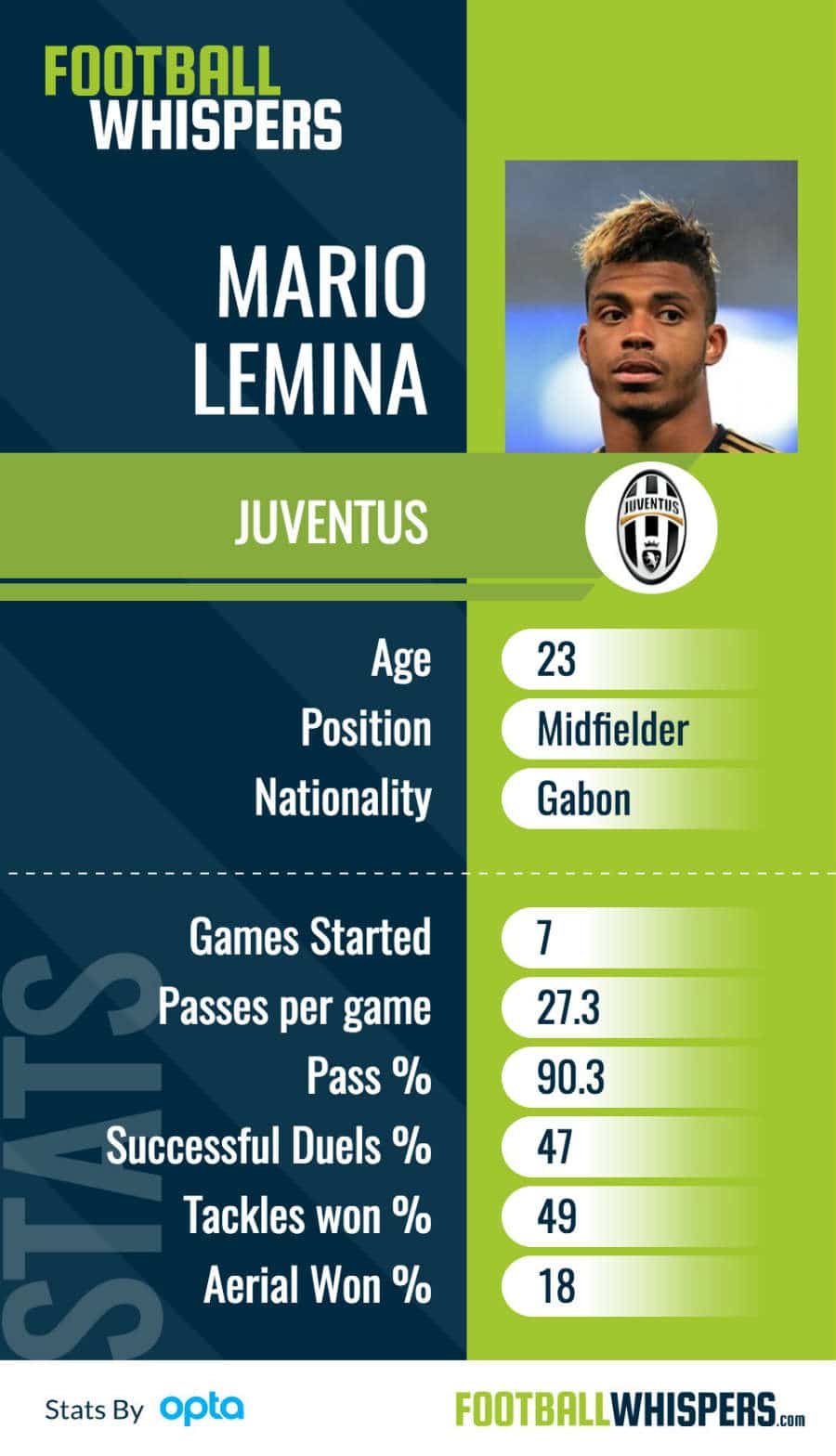 READ MORE: Alvaro Morata And Chelsea Could Be The Perfect Match

According to statistics taken from WhoScored.com, he has averaged 2.2 tackles and 1.3 interceptions per 90 minutes, also completing an impressive 17 of the 27 take-ons (63%) he has attempted.

A high energy midfielder who can thrive in either the trident of players behind Gonzalo Higuaín or in the double-pivot in front of the defence, Lemina is strong enough to hold off his marker and robust enough to make tough challenges whenever he is called upon to do so.

Perhaps the real weakness to his game is his distribution, although he seems fully aware of his limitations in this area. His completion rate has actually improved this term, connecting with 90.3% of his pass attempts, but so many of those are sideways or backwards and are almost always over short distances.

Mario Lemina vs Napoli. Knows his passing isn't great, plays within himself (via @StatsZone) pic.twitter.com/VMJWJjfT2p

The graphic in the tweet above – taken from Juve’s draw away to Napoli last month – highlights that perfectly, Lemina failing to connect with only one pass in his 61 minutes of action, but only six of them actually went forwards.

That is something that he can work on over time, but wherever he lands this summer, his next club can rest assured they have signed a hard-working and gifted player, one with experience of playing in a pressurised environment and emerging with telling victories when it matters.