Celtic appear to have recovered from their post-summer transfer window hangover in recent weeks, securing a string of big victories in domestic competitions.

Impressive 6-0 and 4-2 wins over St Johnstone and Hibernian respectively kick-started the team’s Scottish Premiership title retention bid, while a spot in the League Cup final was sealed with a 3-0 thrashing of league-leading Hearts last Sunday.

Curiously, this upturn took place – in the main – without their club captain.

Scott Brown was rejuvenated when Brendan Rodgers first took charge. Formerly an aggressive box-to-box operator, he retreated to a more cultured withdrawn role, shaping the team’s possession from deep. But, at 33 years of age and with his contract up at the end of this season, Celtic need to plan for a future without him in the starting line-up.

They have been forced to do this throughout much of October due to Brown’s absence through injury, and the results have been positive.

The opening 20 minutes against Hibernian aside, Brown did not take part in Celtic’s last three games on home soil, all of which were outstanding attacking displays. And the data from their league wins over Hibs and St Johnstone indicates that Rodgers’ side were better off without their leader at the base of midfield.

In these matches they averaged 27.5 shots, which was considerably more than their season average of 18.22. Despite the increased number of attempts at goal, their accuracy also went up as they hit the target with 45.45 per cent of their efforts compared to their season percentage of 35.37.

These numbers indicate Celtic created better quality chances against Hibs and St Johnstone than they have generally done throughout the campaign, something backed up by the fact their average xG in these games was a glaring 1.45 above their league average for 2018/19 so far.

All of this can be linked back to more penetrative possession, a tactical aspect the team was lacking in the early stages of this season. In both of their most recent Scottish Premiership matches, they played more progressive passes than their average for the season.

The information above should not be misinterpreted as a simple criticism of Brown individually; the Celtic skipper does have quality on the ball, after all. However, what these statistics do suggest is that, without him, the team dynamic changes for the better, resulting in more creative attacking play.

“That’s all fine and well,” I hear you say. “But who should replace Broony?” 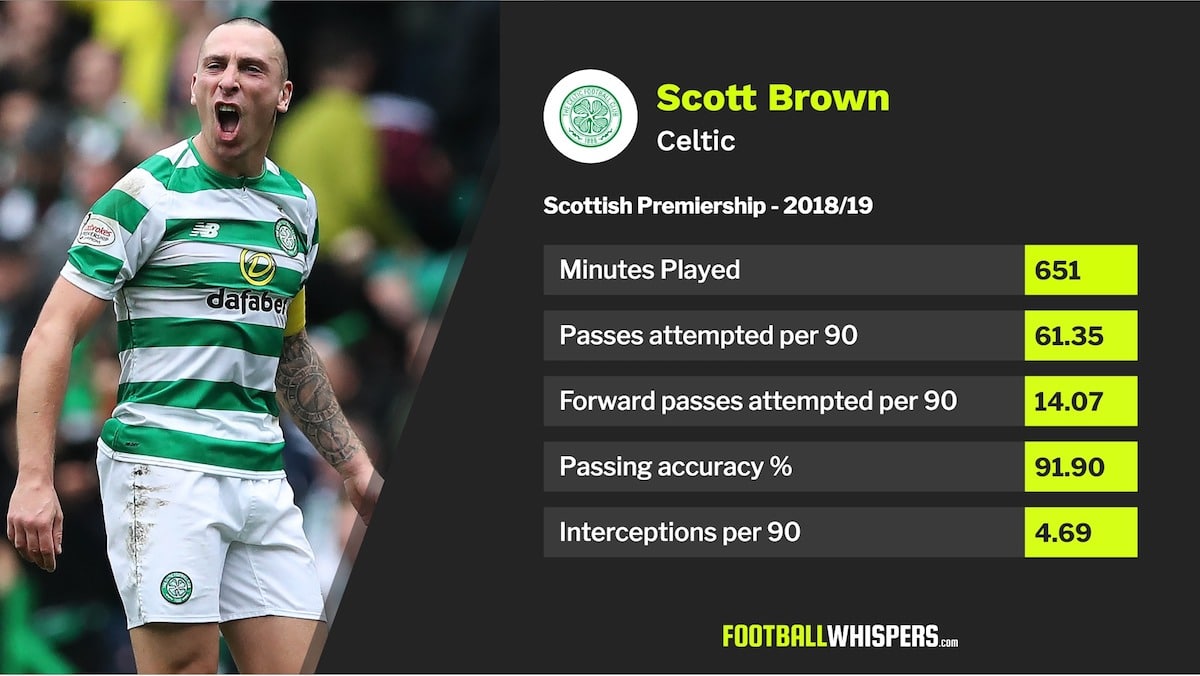 The answer to this question may have emerged in the last few weeks through the redeployment of Callum McGregor in the No.6 role.

Celtic have other, more natural, candidates to succeed Brown in midfield, but none make particularly compelling cases. Nir Bitton has struggled with injury this term; Eboue Kouassi has looked unsure of himself when given an opportunity; and

McGregor may be at his absolute best when playing as an attacking midfielder on the left-hand side, but he has the intelligence and versatility to play effectively elsewhere. Indeed, throughout his time under Rodgers he has been utilised at left-back, on the wing, in central midfield and behind the frontline.

The 25-year-old’s ability to fit into a number of roles is an asset his manager greatly appreciates. “Callum's view of the game is absolutely superb,” Rodgers told Celtic View recently.

“He has a whole range of attributes, but from a tactical perspective, he is fantastic. You only need to tell him something once and he gets exactly what you’re trying to do.”

In the same interview, Rodgers praised McGregor for his one and two-touch play. This aspect is particularly valuable in build-up, helping to set a high tempo that makes it harder for opponents to apply pressure on the ball. Considering this, along with his control and exceptional positional awareness, it’s clear he has what it takes to succeed Brown at the base of midfield.

For some, McGregor dropping deep would only cause another headache: who replaces him in his old role? However, as demonstrated in the League Cup win over Hearts, Celtic have a variety of realistic solutions to this problem.

Ryan Christie is perhaps the most obvious choice, given his style and attributes are similar to McGregor’s. Alternately, Scott Sinclair and Lewis Morgan both offer a more mobile and direct approach on the left-hand side of midfield, with both specialising in cutting inside, dribbling at their opposite men, and combining with their attacking teammates in the final third.

As if to prove their credentials, both Christie and Sinclair played a vital part in the win over Hearts after coming off the substitutes’ bench. The latter threatened persistently and converted a penalty won by the former, who went on to essentially set up the second and score the third with a well-placed strike from outside the box.

The reality is that Celtic have appeared a more vibrant attacking force without their captain in the side of late. So, while Brown remains an inspirational figure and important squad member, he should no longer be guaranteed a starting spot.