Leicester City have spent £69million on strikers since signing Shinji Okazaki from Mainz in July 2015. But none have made anything like the impact the Japanese forward has in that time.

Snapped up for a bargain £7million after bagging 27 in 65 Bundesliga starts, the 31-year-old's place in Leicester folklore is secure thanks to his part in the club's incredible Premier League title triumph in 2016.

Even without that remarkable achievement, the frontman is a firm Foxes favourite. Yet Claudio Ranieri and Craig Shakespeare both tried – and failed – to replace him.

Ranieri clearly saw the top of his side as the weak point following their title win and spent £16million on Ahmed Musa, followed by a club-record £28million on Islam Slimani. Both have been disastrous signings.

Once burned, twice shy you might think. Not so, as Shakespeare splashed £25million on Manchester City reserve Kelechi Iheanacho last summer. But the Nigerian has flopped too and Shakespeare went the same way as his predecessor.

This season Leicester have won just three Premier League games without Okazaki in the starting XI. Unavailable for the Foxes' last four with a knee injury, Claude Puel's side have won just once, in the FA Cup against Sheffield United.

It's good news, then, that Okazaki will return to the fold for the trip to rock-bottom West Bromwich Albion on Saturday – a banana skin if ever there was one.

But why is Okazaki so important to Leicester City? This season he has a modest seven goals in all competitions, only two of which – at Arsenal and at home to Liverpool – have come in defeat. That means he has contributed directly to nine points – the difference between the Foxes' lofty perch in eighth and 17th.

But there's much more to Okazaki than that. It's easily forgotten that the forward is the player Ranieri was referring to when he came out with the immortal ‘dilly ding, dilly dong' line – and the important message behind it.

“He is a hard worker – sometimes he’s not so close to goal but when the ball is around the box Shinji is always there,” said Ranieri. “He is important for the team because he presses a lot – he is our dilly ding, dilly dong. He wakes up our players – he has the bell!”

While his underwhelming goal return might not suggest as much, Okazaki has the third-most shots per 90 of any Leicester player. Only the aforementioned Slimani (2.6) – loaned to Newcastle United in January having failed to dislodge Okazaki – and Riyad Mahrez (2.4) manage more than his 2.1.

He is an enabler too. Although he has only recorded one Premier League assist this term, Okazaki is behind only Marc Albrighton (1.7), Mahrez (1.7) and Demarai Gray (1.2) for key passes per 90 with one.

Okazaki and Jamie Vardy have started just 13 games in all competitions this season. Yet it's Leicester's more fruitful pairing with six of Vardy's 15 goals coming with the benefit of the workaholic former Stuttgart forward behind him. It's a relationship of give and take, though, with all bar one of Okazaki's strikes coming when paired with the England international.

But it is on the other side of the ball that he does his most important work, as recognised by the mastermind behind Leicester's title win two seasons ago. With 1.9 successful tackles per 90, Okazaki is second-most effective player in Puel's squad when it comes to recovering the ball. Wilfred Ndidi (4.2) is the only player to win more challenges.

For context, fellow forwards Slimani (0.7), Vardy (0.5) and Iheanacho (0.4) are nowhere near as effective. So this is not a directive from Puel or any of his predecessors, rather Okazaki's relentless energy put to good use. 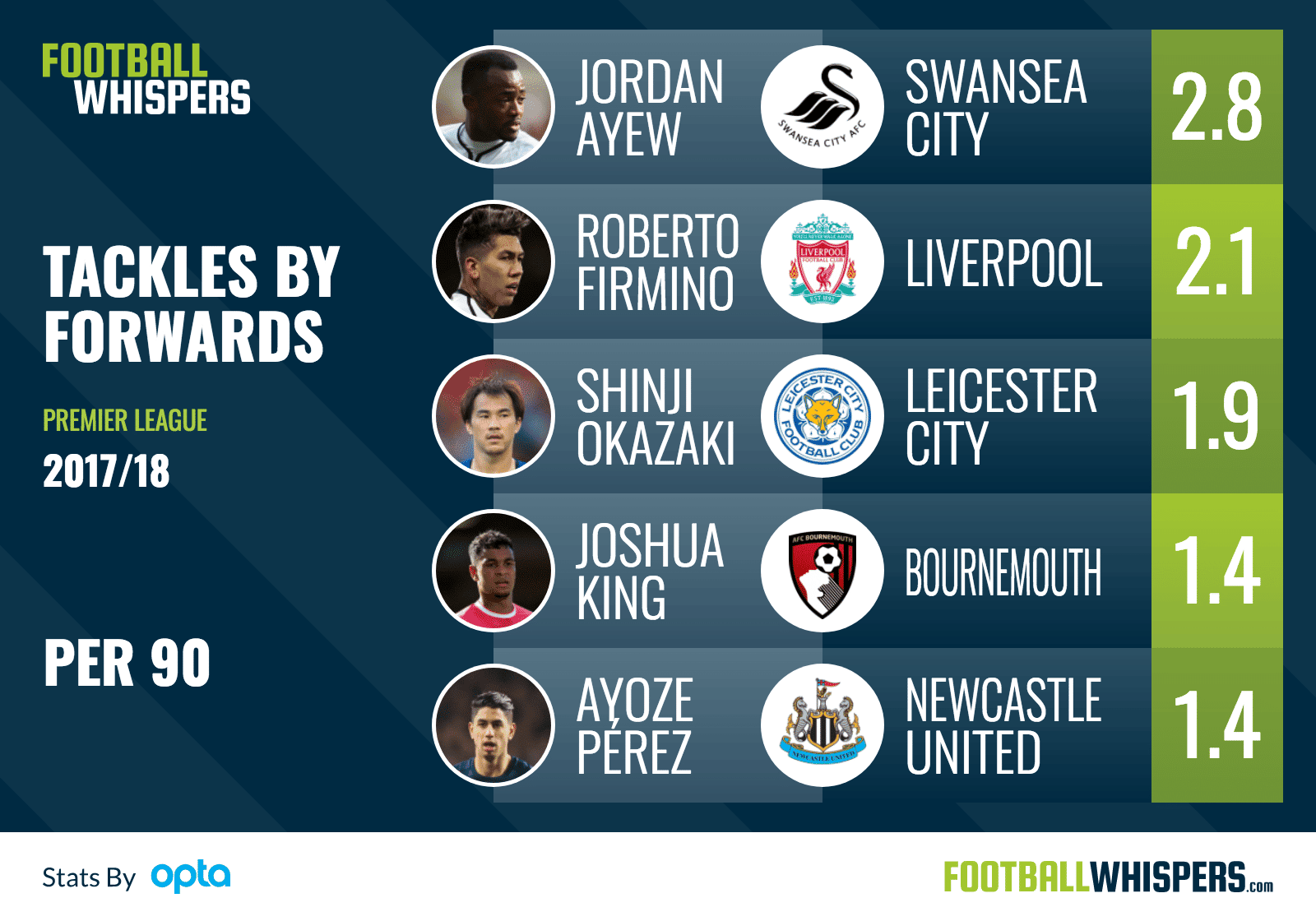 “Shinji is so important because he gives 100 per cent all the time and the role he plays is unique,” Leicester captain Wes Morgan said previously. “He plays as a forward but drops into midfield when we are out of position.”

In the images below you can see perfectly Okazaki's important role on the defensive side. Manchester United striker Romelu Lukaku knocks the ball back into midfield where Nemanja Matić is not alert to the danger posed by the Leicester forward. 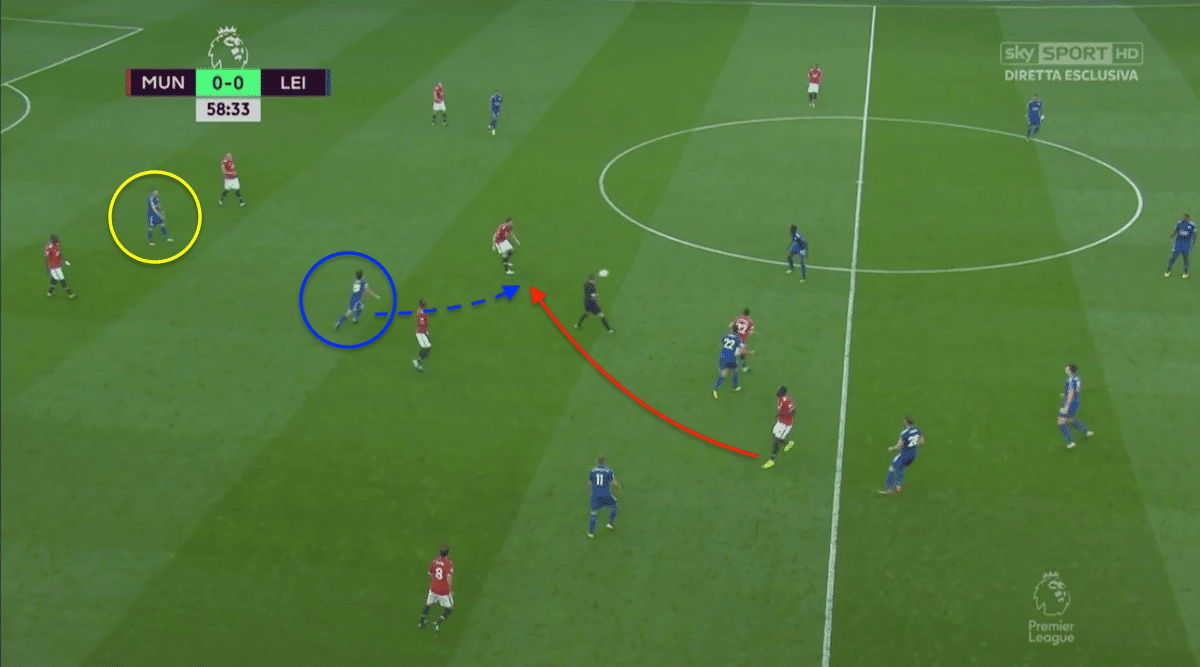 As quick as a flash, Okazaki steals in and hassles the United midfielder – who is totally blindsided by his sudden arrival – out of possession to launch a Leicester counter attack with Vardy (circled in yellow) loitering with intent between United's two centre-halves. 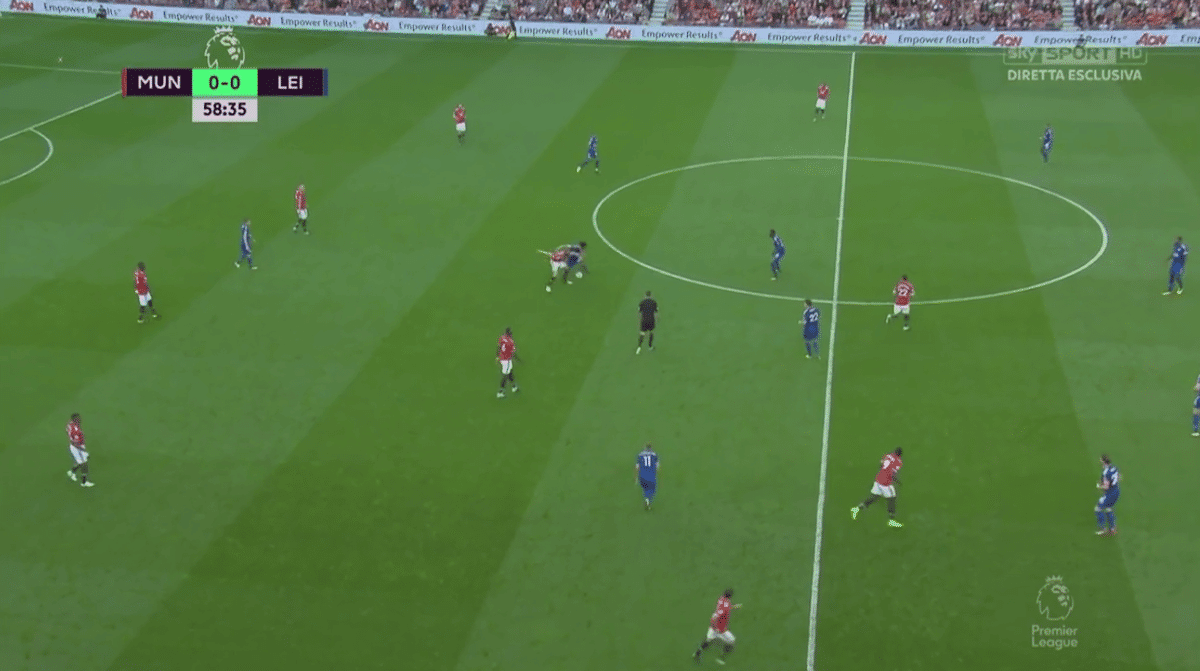 The contrast to when Okazaki is not in the Foxes side could not be more stark. In the recent 1-1 draw with Bournemouth we see Nathan Aké (circled) allowed to stride out and with two options ahead of him and another to his right.

Given the Cherries like to play out from the back and through the thirds, Okazaki's role in preventing them from doing so would have been more important than ever. Especially with Mahrez and Vardy reluctant to hurtle around in the same way as their absent team-mate. 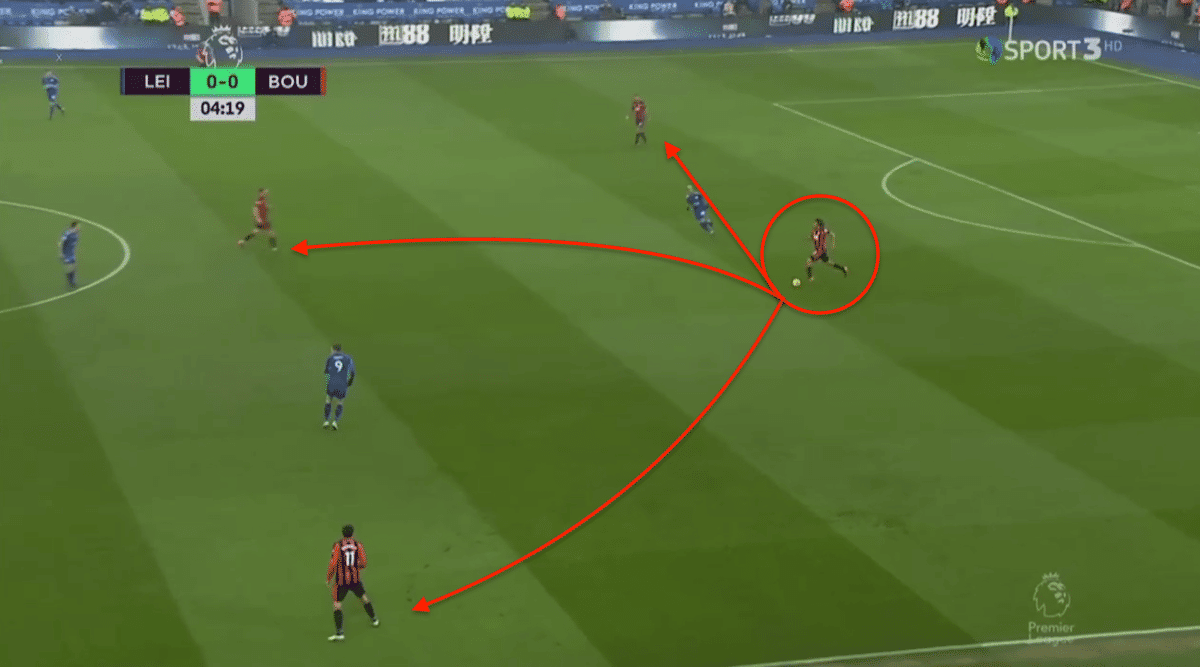 In a team boasting the attacking talents of Vardy, Gray and Manchester City transfer target Mahrez, it is unlikely Okazaki will ever grab the headlines or win the plaudits he deserves.

He is the ugly duckling of a side packed with flair and pace, but the role he performs is imperative and it's why, despite multiple attempts to replace him, he remains on the throne at the King Power Stadium.