AC Milan top the Serie A table heading into this weekend's fixtures and find themselves away at Udinese on Saturday. The hosts are without a win in their last four games and have been slipping closer and closer to the relegation zone in recent weeks.

We're predicting that there will be goals in this game at both ends of the pitch, as there have been in four of the last five league meetings between these two clubs. Five of Udinese's last six competitive and non-competitive matches have ended with both teams getting on the scoreboard, while both teams have scored in three of AC Milan's last six fixtures in all competitions.

Two of the last three encounters between Udinese and AC Milan have produced over 2.5 goals, and we're expecting at least three goals to be scored this weekend. Over 2.5 goals have been scored in five of Udinese's and four of AC Milan's last six matches, so you can see just why we're backing goals on Saturday.

Ibrahimovic top scores in the league for AC Milan this season with six goals and the 40-year-old is still key to the way the Italian giants play. With 3-goals in his last four league games, Ibrahimovic has been at the heart of AC Milan's good run of form in Serie A and we're backing the Swedish international to score against Udinese this weekend.

Can AC Milan keep a hold of top spot this weekend?

Udinese were away at Empoli last time out where despite taking the lead through Deulofeu in the 22nd-minute, Udinese ended up on the wrong end of a 3-1 scoreline. Empoli equalised early in the second half and scored again just before the hour mark. A third and final goal for the hosts sealed Udinese's fate 12-minutes from time. Udinese need to put in a much-improved performance this weekend if they want to end their winless run in Serie A.

AC Milan ran out comfortable 2-0 winners at home to bottom of the table Salernitana last time out and moved to the top of the table in the process. Kessie opened the scoring after just 5-minutes and Saelemaekers made it 2-0 in the 128th-minute. Many assumed the floodgates would open but the scoreline remained the same through to the final whistle. AC Milan have dealt well with their injuries this season and look like they have what it takes to challenge for the title this season.

Udinese: Lucero and Wallace return from suspension this weekend but Pereyra remains a doubt due to a shoulder injury. 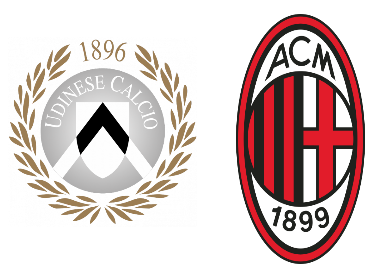