UCD have been useless this season and haven't even hit 10 points as yet. Will they hit that marker here? Find out with our UCD vs Derry City match preview with free tips, predictions and odds mentioned along the way.

Derry City to win a game with goals at both ends

UCD and Derry City have met 25 times since 2008; those meetings have mostly been one-sided, as UCD won just three of those 25 games. As a matter of fact, those three wins were on the road; Derry City have in fact won all of their last 10 visits to this stadium, with no losses in 14 visits since 2008. It's important to note that Derry City have had their fair share of struggles recently; however, they've been much better than UCD, who have just one win this season. What's more? UCD's win was on the road; they are without a win at home this season. We believe that Derry City will win this match; and considering they have no clean sheets in their last six games, UCD should find the net.

Derry City have scored a lot of goals this season; they bagged 34 goals in 19 league games, no team has scored more goals so far. In the same vein, UCD have had the worst defence in the league this season; they allowed 40 goals in 19 league games, no team has conceded more goals. It's worth mentioning that both teams ‘ recent games have mostly been on the high-scoring side; six of UCD's last nine, and four of Derry City's last five games went above the 2.5 goal mark. On that note, this will likely be a high-scoring affair.

UCD and Derry City have had very different campaigns so far this season with one side sitting in last place of the standings whilst the other pushes towards the top of the table. With that said, both have a big incentive to leave it all out on the pitch here.

UCD have been the worst team in the Premier Division this season; they've managed just one win in 19 league games so far, with six draws and 12 losses. It's fair to point out that UCD have no wins at home this season; they'll hope for better results as Derry City come visiting.

Derry City have been going through a tough time the last few weeks; they've won just one of their last eight games, and even that win came in a friendly. In fact, Derry City have no wins in their last seven league games; they'll fancy their chances against fellow strugglers UCD.

A quickfire FAQ on UCD vs Derry City 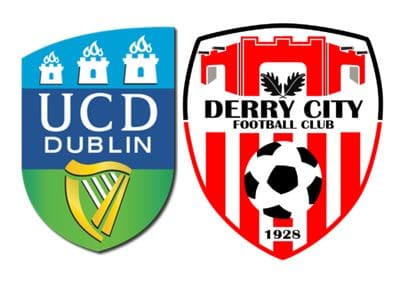