Since the age of six years old Mason Mount has been influenced by Frank Lampard.

As a boy he would play in a Chelsea shirt with the midfielder's name printed on the back. When he joined the Blues academy in 2005, he wanted to follow in Lampard's footsteps at Stamford Bridge.

“He was always my idol,” the now 20-year-old told Chelsea's website after he signed a new five-year contract. “He was a Chelsea player and an attacking midfielder like me. I always looked up to him.”

It's often said a person should never meet their childhood hero, but Mount made the decision to work under his last season. He joined Derby County for the 2018/19 campaign – and turned down a loan move to eventual Champions League semi-finalists Ajax – to be coached by Lampard.

The Chelsea legend was immediately impressed by the youngster. Mount scored on his Championship debut and became a regular. He helped the Rams shock Manchester United in the League Cup at Old Trafford and by October had been called up to the senior England squad.

Lampard broke the news to Mount, and in a fashion which highlighted the close relationship between the pair.

“He called me into his office and said he was thinking of dropping me for the next game to give me a rest,” Mount recalled. “But then he smiled and said; ‘I've just spoken to Gareth [Southgate], you've been selected for the seniors.'”

The midfielder wasn't handed his Three Lions bow but that will come. Perhaps even this season, one in which Mount will again work with Lampard. This time, however, it'll be at Chelsea.

Lampard's appointment this summer was exactly what the West London club needed. The last two seasons, first under Antonio Conte and then Maurizio Sarri, had led to a disconnect between the team and its supporters.

Lampard reunited the club and fanbase in an instant. He also promised to give the club's academy graduates – often overlooked in favour of expensive and mediocre imports – an opportunity to impress.

In pre-season Tammy Abraham has been given an opportunity to stake his claim. Ruben Loftus-Cheek, currently injured, has signed a new contract. Callum Hudson-Odoi is also set to pen a five-year deal. And, of course, there's Mount.

He has featured regularly in the club's friendlies, predominantly used as the No.10 in a 4-2-3-1 shape. He scored against St Patrick's Athletic and was influential against Barcelona in Japan. In suffocating humidity, Mount pressed, harassed and then impressed with the ball.

“We are always crying out in England for talented midfielders that can link play, are intelligent and score goals,” Lampard said of Mount while still at Derby. “I think Mason can have a big future. What he can bring us is good quality and energy; we’ve seen it from the moment he walked through the door.”

That energy was reflected in Mount's output last season. In the Championship, a division which tests the physical capabilities of even the fittest of players, only nine midfielders won the ball in the attacking third on more occasions.

Once possession had been recovered, the England Under-21 international was a threat. His 2.6 shots per 90 was the 13th highest average among midfielders in the second tier, as was his shots on target per 90 of 0.89.

He also – another trait influenced by Lampard – made sure to get into the penalty area and score goals. His 0.18 per 90 only bettered by 17 of his Championship peers. 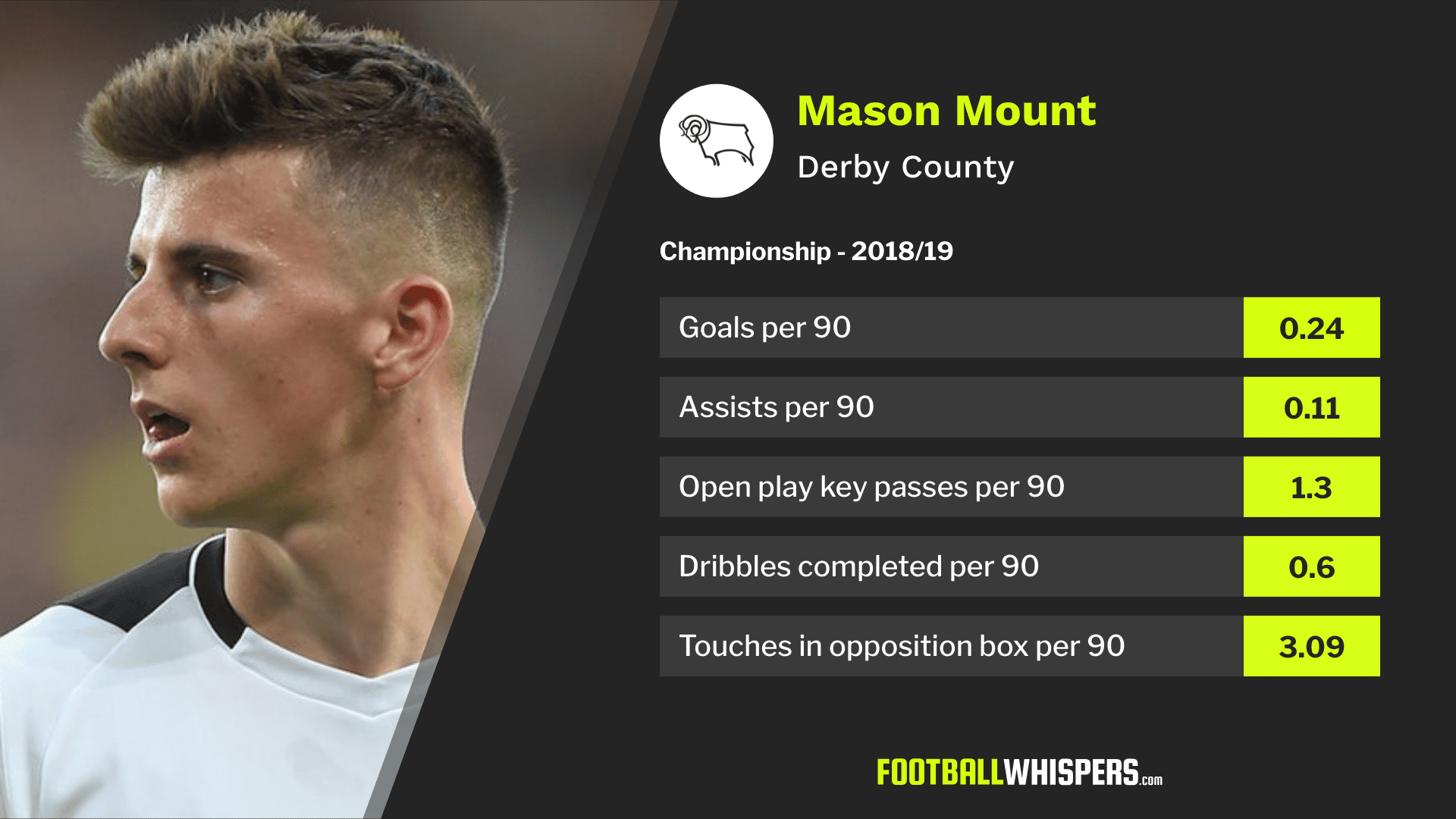 “He's given me loads of advice so far and I'm just trying to take it all in,” Mount told in October. “I'm going to learn so much from him. If I can achieve half of what he has I will be very happy.”

The difference in quality between Championship to Premier League is substantial, but it's even greater when making the leap to a club with ambitions of finishing in the top-four and competing in the Champions League.

Yet Mount has always stepped up. He went from youth team football to starring in the Eredivisie and Europa League for Vitesse in 2017/18. He then transitioned to the rigours of the English game to help Derby reach the play-off final last term.

The first-team at Chelsea? No problem. Or so Lampard believes. “Mason's part of the squad this year,” the Blues head coach said after the club's pre-season friendly against Kawasaki Frontale. “It's time for him, and his qualities will only improve even more with the quality around him.”