There can't be too many countries left who don't have their own ‘Insert nation here Messi'. Mexico is no exception. So meet Diego Lainez, El Tri's next great hope.

Speaking to Barcelona icon: “I really identify with him. I really like his style of play, and I try to learn from him and do some of the things he does.

“I look to take players on a lot, play a lot of one-twos, but I also like to shoot from distance. I can play behind the No.9 or as a midfielder. Whatever is needed, I do it, and I can use both feet very well.”

If 2018/19 was a big season for Lainez then we're predicting an even more successful 2019/20 campaign for the 19-year-old Real Betis attacker.

Signed from Mexico City-based side Club América in January for $14million (£11.2million), in making the switch to Europe he became the second-most expensive Mexican player of all time. 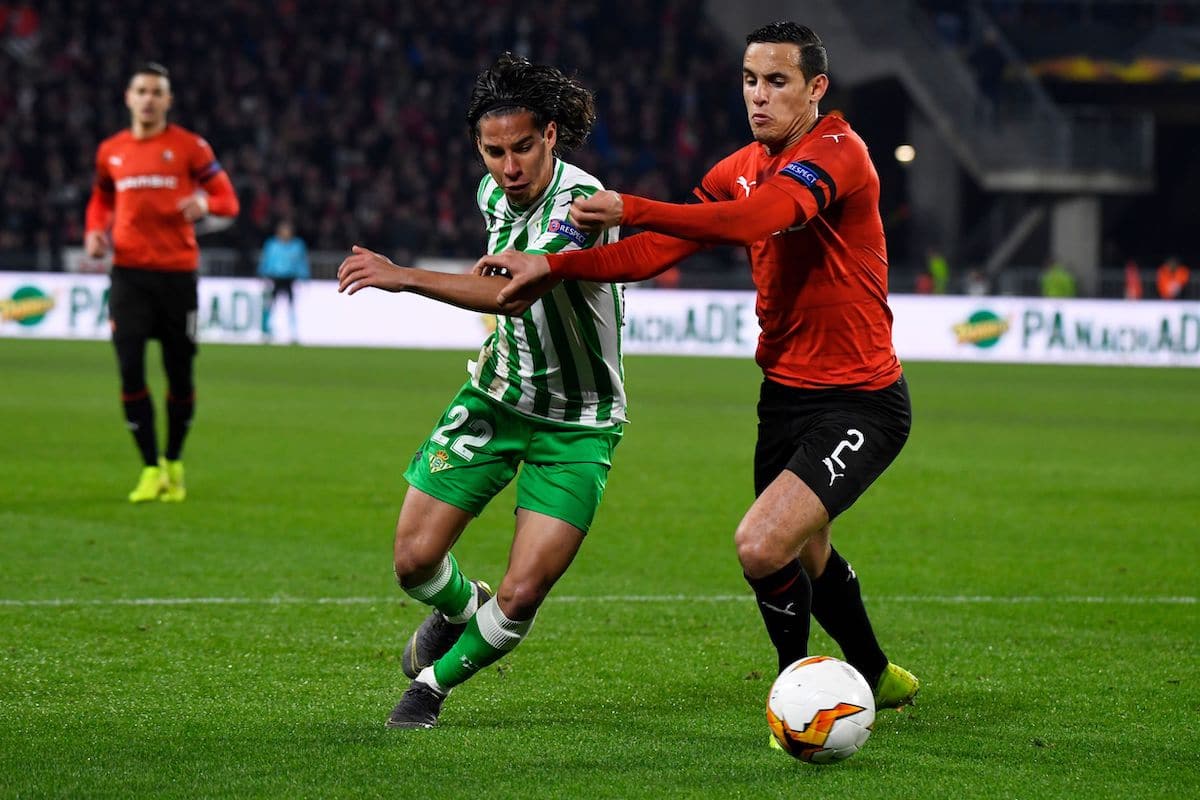 A tricky winger equally comfortable playing in the No.10 role, Lainez was eased into life in Seville in his first six months in LaLiga, making 12 appearances – just three starts – but much more will be expected from him this term.

Lainez has long been touted as an exciting prospect and, as a child, was spotted by the same scout, Ángel González, as older brother Mauro. Three years his senior, Mauro Lainez joined Pachuca while Diego opted to sign for Club América.

His decision was soon vindicated. In March 2017 – four months after leaving his family behind in Tabasco – Lainez made his professional debut for Los Águilas in a Copa MX group stage match against Santos Laguna. His full league debut soon followed against León and, in doing so, he became one of América's youngest ever players at 16.

While those who witnessed Lainez slaloming effortlessly between players with a wiggle of the hips and drop of the shoulders would say the youngster's trajectory was solely down to his innate talent, the attacker claims he was rather more fortunate.

Speaking in the same  interview he said: “I came to the club for some open trials and I had the good fortune to be asked to hang around.

“Around two hours later, the team from my age level played against Puma. It went well for me, I scored a goal in that match and that helped me stay here at this great institution.” 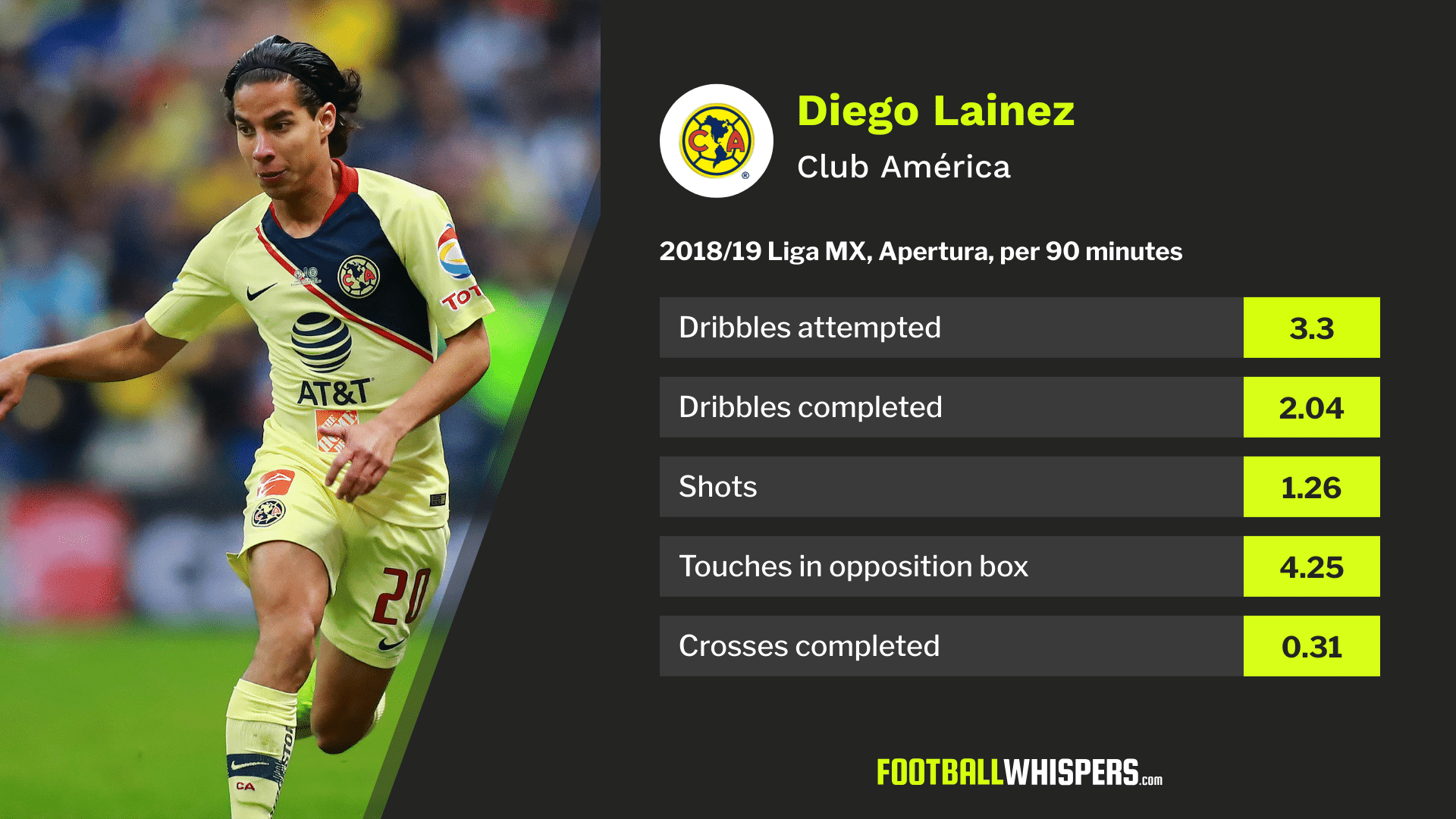 From there he wasted little time establishing himself at América and finished his maiden season with 11 appearances in all competitions. By the time the 2018/19 campaign began he was regularly involved in the first team, netting his first professional goals in a 3-1 win over Pachuca, becoming the youngest player to do so in América history and the club's fifth-youngest scorer overall.

Inevitably, interest from Europe grew. Ajax were thought to be head of the queue but it was Real Betis who took the plunge in January, bringing the diminutive – he's only 5ft 6ins – winger to Seville in a deal which was big news in Mexico.

Lainez made his debut ten days later, coming off the bench with ten minutes remaining in a 3-2 home win over Girona. The youngest ever migrant from Liga MX, he wasted no time in showing his new supporters what they could expect and very nearly marked his bow for Los Verdiblancos with a stunning assist.

Picking up the ball on the left, Lainez stood up the defender before using his acceleration to drive into the penalty area, picking out a team-mate with a low cut-back, only for the chance to go to waste.

It was a remarkable introduction from the then-18-year-old but the rest of his maiden season in Seville struggled to live up to that seductive first impression. In fact, Lainez has been linked with a move away from the Benito Villamarín this summer with a linked.

Explaining his decision to leave Lainez out of his Gold Cup squad this summer, the former Barcelona and Los Angeles FC coach said: “I would prefer that players leave Mexico well-armed and not too soon.

“Edson (Álvarez) would leave at a very good age, many matches in América, being a champion in local football, having participated in a World Cup. He's armed, unlike Diego Lainez.”

But Lainez is defiant. He has no intention of returning to his homeland with sources close to the player reiterating his cast-iron belief that he is good enough to make a success of his time in Betis and Europe. Furthermore, Betis have no intention of allowing Lainez to move on.

And why should they? His time in Mexico proved he is one of the most exciting young attackers in world football. As well as being able to evade defenders, create chances and score goals he is a surprisingly hard worker off the ball.

In the Mexican Primera (Apertura) last season he averaged 1.41 tackles and interceptions per 90 minutes to go alongside 2.04 successful dribbles and 4.25 touches in the opposition's box; an iron fist clad in a velvet glove, if you will.

Martino might have last coached Messi in 2016 while in charge of Argentina but if Lainez goes on to emulate his idol he'll have little choice but to call upon the Mexican Messi.