Ajax knew last summer it was only a matter of time until one of Europe's wealthiest sides lured away Matthijs de Ligt. The fact the Dutch club kept hold of the centre-back for the 2018/19 season – one in which they reached the Champions League semi-final – was an unexpected bonus.

De Ligt is a generational talent. The complete package at just 19 years old. It's why Juventus have paid close to £70million to sign the defender. Replacing him is almost impossible without spending an exorbitant sum of money.

But succession planning is what Ajax do better than most. When one young star moves on another is brought in either through intelligent scouting or via the club's famed youth system.

Perr Schuurs, who was signed from Fortuna Sittard in the summer of 2018, was expected to be the heir to de Ligt's throne. Yet his lack of first-team football last season suggested the Amsterdam-based club were not yet truly convinced. Which is perhaps why they went out in April and spent around £4million on Kik Pierie.

The American-born defender has established himself as one of the finest defensive prospects in Holland over the past two seasons. He broke into the Heerenveen starting XI shortly after his 17th birthday and quickly cemented himself as a starter.

A composed ball-playing centre-back, it's testament to Pierie's ability that he was also used at left-back during his time in the Superfriezen first-team. Not many 6ft 1ins defenders could adapt to the role – especially without much senior experience – but the teenager did so seamlessly.

That versatility is possessed by one of the elder statesmen of the Ajax team: Daley Blind. And the club's director of football, Marc Overmars, believes the former Manchester United star can have a vital influence on the teenager.

“He will get minutes and start playing matches but Kik needs to develop further,” Overmars told De Telegraaf. “He is still young and we think he can learn a lot from Daley. So we hope Kik takes a good look and then I am curious about what will happen. ”

What makes Pierie so effective is that he blends the principles of modern-day defending with those of years past. He reads the game expertly, far better than many defenders his senior, and he is rarely caught out of position.

He is also adept at stepping out of the backline and stopping attacks, which is why he was tenth among Eredivisie defenders for interceptions per 90 (2.22) and also in the twenty-fifth percentile for possession reclaimed in the middle third per 90 (2.45).

It's what he does with the ball, however, that makes Pierie special. He has the range of passing usually possessed by a creative midfielder and can open up the pitch in an instant.

As shown in the graphic below, Pierie didn't play as many passes per 90 as de Ligt last season but that was because he wasn't in a side that dominated possession –Heerenveen averaged 49.39 per cent of the ball in their Eredivisie games compared to Ajax's 63.64. 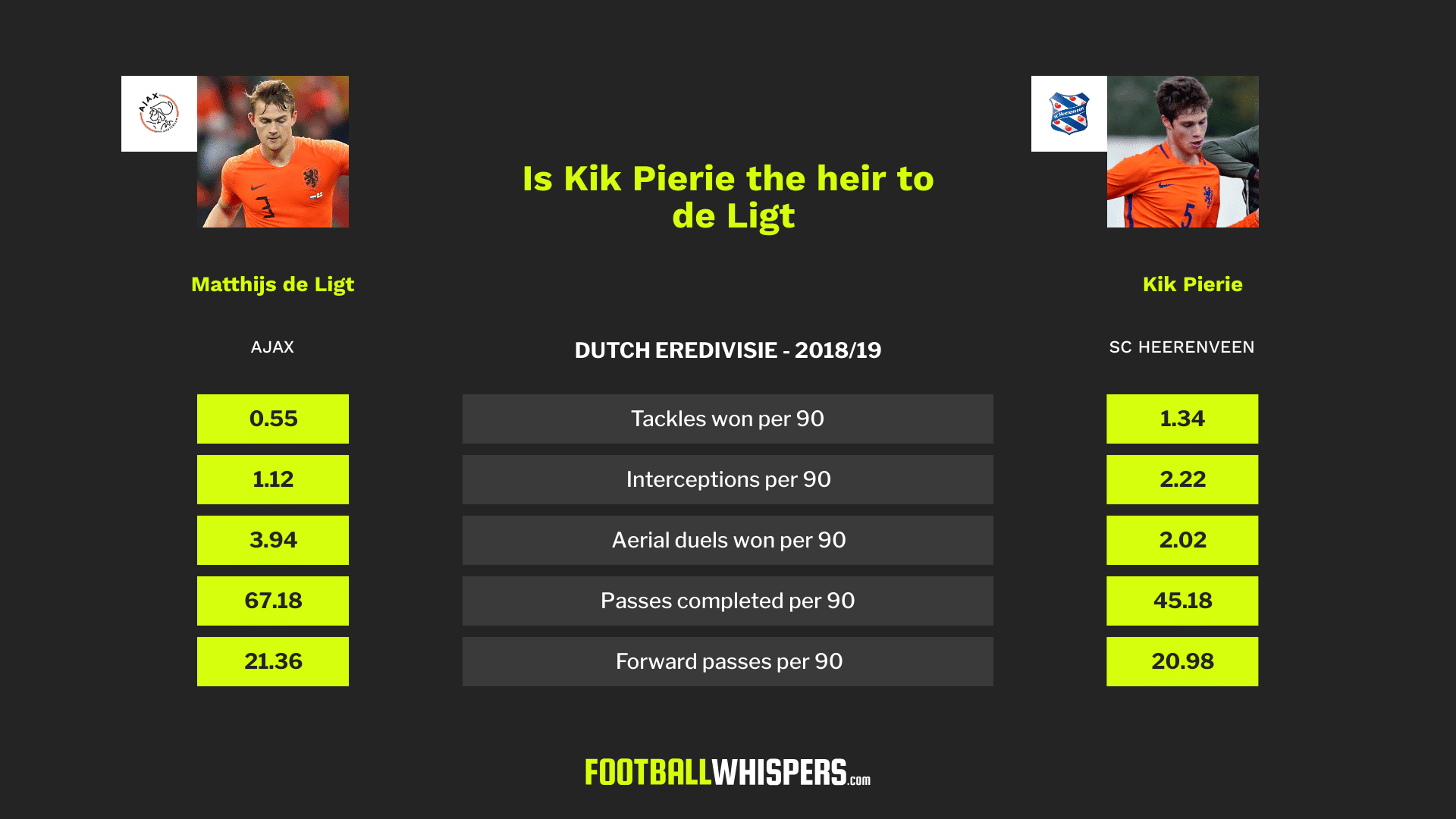 Yet the number of passes played forward per 90 by the Dutch Under-19 international was only marginally less than the now Juventus defender. Pierie would often receive possession and look to create, either with an intelligent pass through the opposition midfield or by a raking crossfield ball to the right-winger, his go-to move to quickly turn defence into attack

This is likely to change at Ajax. Expect Pierie, who was linked with Manchester United in 2018, to become a little safer with possession, to look to recycle the ball rather than open up the pitch. But his raw skill set is one that should mesh well with what Erik ten Hag – and the club as a whole – demand from their defenders.

“I fit in with the Ajax philosophy so I don't think it's strange that we have come together. I am happy and proud to be part of the largest club in the Netherlands but this is only the first step. I have to make sure that I get to the first 11 as quickly as possible.”

Fortunately for Pierie that shouldn't be too much of a challenge given there is a high-profile vacancy in the heart of the defence. De Ligt will not be an easy man to replace but the teenager has everything required to do so.