Developing young footballers is not an exact science. One injury can end it all. Off-field temptations can seduce even the brightest star. Potential can simply fizzle out.

So for a club to hone the raw skill of a youngster to the point where they become a first-team regular is something that should be lauded. When this is done on a larger scale, when it becomes almost a conveyable of talent, well then that club is truly special.

Benfica are such a club. This summer they lost João Félix. The forward had just one season of first-team football to his name yet so impressed were Atlético Madrid that they paid £107million to sign the 19-year-old.

To lose such a unique talent would be a blow to the majority of sides in Europe. Not Benfica. They nurture young players for market; every decision taken to ensure the Águias receive maximum value when one of Europe's elite take a shine to one of their prospects.

Rúben Dias will soon follow Félix out of the club. Ferro and Gedson Fernandes won't be too far behind. Neither will Umaro Embaló, another precocious forward.

And then there is Florentino Luís, a 19-year-old who has already attracted the attention of the continent's most powerful sides.

The midfielder was only promoted to the Benfica first-team squad in February but immediately established himself in the starting XI. He made 14 appearances and ensured the club clinched the Primeira Liga title for the fifth time in six seasons.

Quick and agile across the ground, Luís proved himself an excellent destroyer last season. No midfielder in the Portuguese top-flight attempted more tackles per 90 than the teenager (4.5), none could better his tackles won per 90 (2.78) and he was also peerless when it came to interceptions per 90 (3.43). 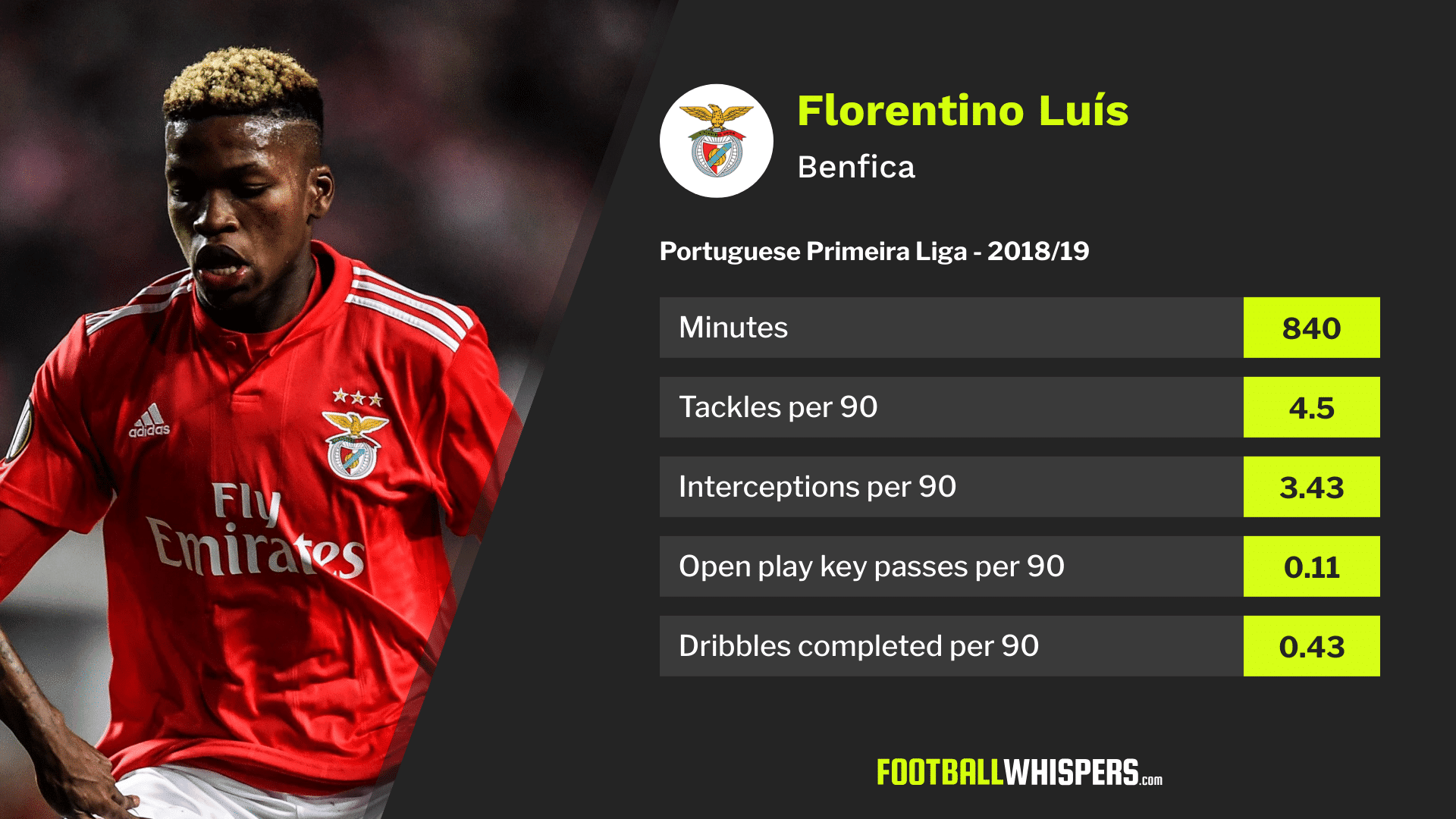 Such high performance is unlikely to be sustainable over the course of an entire campaign but it highlights just how effective Luís was after his integration into the side.

“He was never a technical player, it was not what differentiated him from others,” former Benfica Under-23s coach João Tralhão told DN.

“What differentiated him was his ability to read the game, his decision making, his positioning, the ability to disarm the opposition. His use of space was incredible for such a young boy. We knew he would grow up and reach a very large level.”

Tralhão also affectionately dubbed Luís ‘the octopus' due to his six-foot frame an long legs. In that sense, he is reminiscent of Paul Pogba, especially when in possession.

He is composed on the ball, always patient as he searches for the right pass, and has a maturity to his game that is rare. Luís is never flustered on the pitch, he never appears riled or influenced by the emotions of a crowd or team-mates.

That was evident in his first Benfica start; a Europa League away game in Istanbul against Galatasaray. Deployed to protect the Águias defence alongside fellow future star Fernandes, Luís played the full 90 minutes as Benfica clinched a 2-1 victory.

“Mentally and emotionally, he is a very, very strong player,” Tralhão added. “He is very cold, the same in a stadium with 100,000 people, in a stadium that is empty, or in a training session. His concentration is always exactly the same.”

It's that combination of raw talent and mental fortitude which has attracted the attention of Europe's elite. Paris Saint-Germain were reportedly interested in the teenager in March, while Manchester City were linked with Luís the following month as they searched for a potential long-term replacement for Fernandinho.

The 19-year-old's contract – which he only signed in October 2018 – included a £52million buyout clause. Such a fee wouldn't have scared off such financially powerful sides but Luís wasn't keen on a move abroad this summer.

“Many clubs are interested but there is a common project with Benfica,” the youngster's agent, Bruno Carvalho, said in May. “Florentino is not going to leave because he wants to play with the first team of Benfica. We can think about a transfer later as he will be among the top six players in the world.”

These weren't simply hollow words and at the start of this month, Luís signed a new five-year contract with Benfica which raised his buyout clause to £107million, the same fee Atléti paid for Félix.

That is a figure which highlights just how much Luís is valued by the Portuguese club, but one day he will emulate Félix and make a move to a side with ambitions of winning the Champions League.

Not that Benfica will mind. It's simply what they do.