Rhian Brewster is in an exclusive club. He’s yet to make his Liverpool debut but already has a Champions League medal – the one he wore to the barbers prior to returning to pre-season.

He may not have influenced proceedings on the pitch but he is a big character off it. The 19-year-old doesn’t look out of place with the stars of the first-team and had it not been for a severe injury he’d have had much more than a watching brief over the past couple of campaigns.

It was in January 2018 that Brewster fell awkwardly in a game against Manchester City’s Under-23s. He was stretched off and needed surgery to repair ligaments in his ankle. However, two months after that successful operation he needed another, this time on his knee after damaging his meniscus.

The road to recovery was a slow one and there was no guarantee he’d return the same.

Prior to the injury, Brewster was one of the brightest talents in the English game. He’d made the move from Chelsea as a 14-year-old after realising his route to the first-team at Stamford Bridge was a difficult one.

Speaking in an interview with JOE, the forward opened up about the difficult decision he had to come at such a young age.

“I didn’t want to leave because I’d been there for so long, I did love Chelsea and they played a big part in my early development. I was enjoying my time there and I made so many friends for life. I knew that it wasn’t about what was comfortable and the easy option though, but what was best for me.

“I looked at a lot of clubs and their plans, but Liverpool stood out to me. I liked their approach to development and things just felt right. They were the best choice for me then and they still are now.”

In a team containing Jadon Sancho, Phil Foden and Callum Hudson-Odoi, it was Brewster who stole the show at the Under-17 World Cup in 2017. 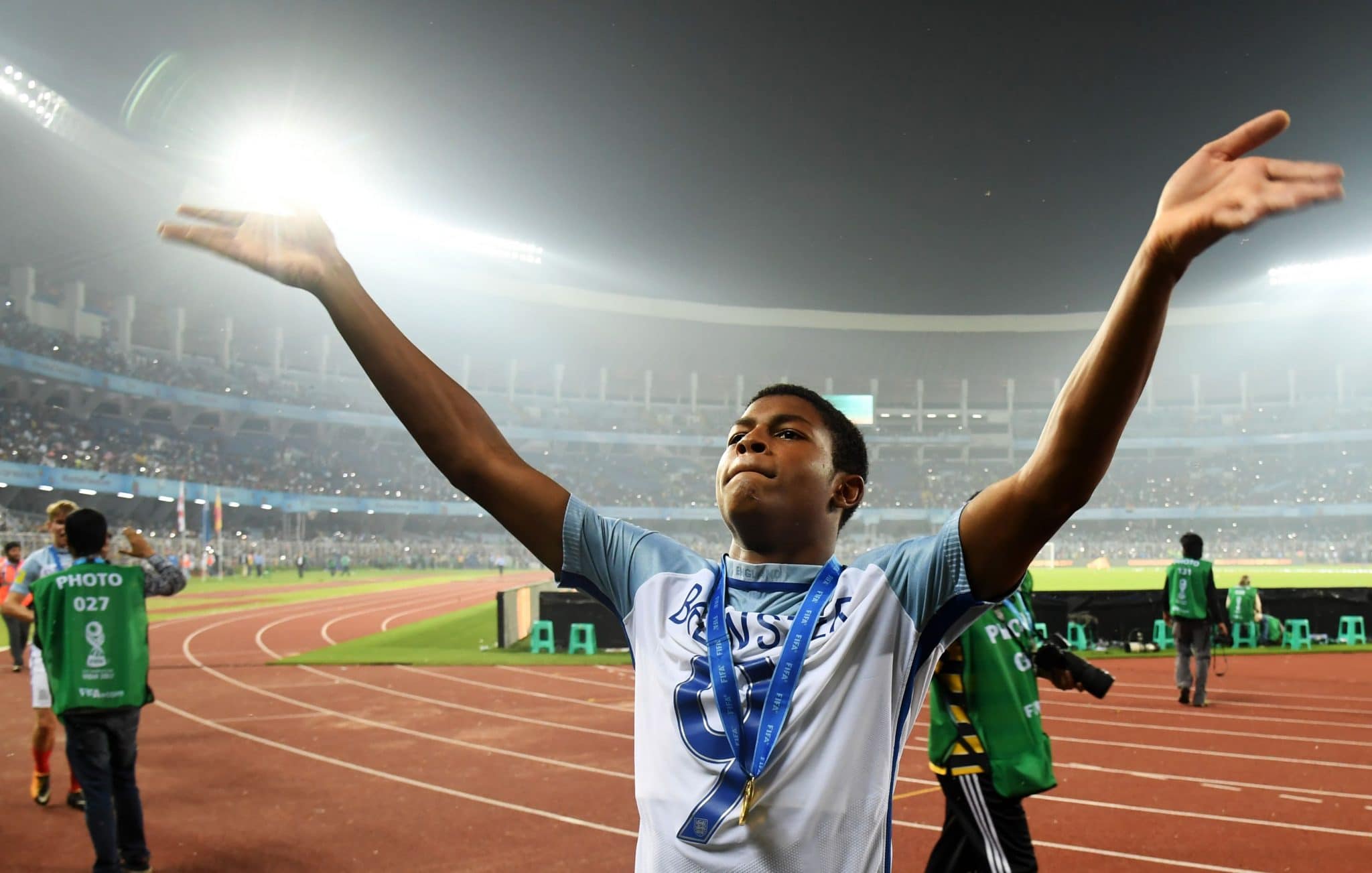 He won the Golden Boot and Bronze Ball after netting eight goals on route to a famous triumph.

Brewster scored once in the group stage before finding his shooting boots to bag back-to-back hat-tricks in the knockout rounds against USA and Brazil. He also got England back into the final against Spain. At the time, his goal halved the deficit and the Three Lions roared back to win 5-2.

The talent was there for all to see.

Brewster is a clinical, composed finisher with a confidence rarely seen from players his age. But then unlike other goalscorers, he's got the work rate, too. The teenager doesn't just wait for opportunities to be created, he creates his own.

Rhian Brewster knows where the goal is ?

Big season ahead for the #LFC striker ? pic.twitter.com/V1wISkBsr2

He's an annoyance, much like Roberto Firmino. In the same interview with JOE, the hot-shot teen revealed he does look to learn from the maverick Brazilian during training sessions.

“We’ve got Bobby [Roberto Firmino], who is world-class and is so intelligent in the way he leads the attack. I am constantly learning from him, looking at why he’s one of the first names on the teamsheet.

“I pay attention to the way he times his movements to draw defenders, how he presses and all that, but without losing sight of my own strengths as well. I believe you should always be focused on improving, but always be yourself too – you can’t just copy another player.”

You can see that in his game. Brewster is not a Firmino doppelgänger but then nobody truly is. Yet he's got that in your face high energy very few wonderkids possess.

It's clear Jürgen Klopp rates him. Back in January, the Liverpool Echo suggested the Reds only sanctioned Dominic Solanke's £19million move to Bournemouth because of the faith the German manager had in Brewster.

He also singled him out recently when the team returned for pre-season training.

With Liverpool seemingly not in the market for a big-money attacker this summer, extra responsibility will be placed on Brewster's shoulders to help ease the burden on Firmino, Mohamed Salah and Sadio Mané.

Granted, injuries have resulted in him turning into a bit of an unknown. The 19-year-old has all of the tools and the mindset to make a big difference for Liverpool if he's given an opportunity.

In a warped way, the injury lay-off removed all the pressure on him. Usually, those hyped as youngsters are expected to immediately have an impact and it often goes against them. But now Brewster heads into this pre-season free of expectation from the outside world but with a point to prove to himself.

It could be the perfect storm. He's undoubtedly one to watch during the 2019/20 season.