With a swivel of his hips, Matheus Cunha announced himself to Bundesliga fans.

The 20-year-old latched onto a Timo Werner pass ahead of Sven Bender before bamboozling Wendell with a pirouette as he stumbled into the Bayer Leverkusen penalty area.

Goalkeeper Lukáš Hrádecký raced out to narrow the angle but perhaps committed himself a little too early. Yet that shouldn’t take anything away from the composed finish that followed.

Cunha nonchalantly lifted the ball over the shot-stopper. It was the finish of a seasoned veteran but the goal was only the Brazilian's second in the Bundesliga. He took it like it was his 200th.

His move to the Red Bull Arena during the summer of 2018 went under the radar.

As an 18-year-old, Cunha netted ten goals for FC Sion in the Swiss League. He did enough to catch the eye of the same talent spotters who harnessed the potential Sadio Mané, Naby Keïta, Dayot Upamecano and Joshua Kimmich.

He skipped the Red Bull Salzburg leg of the usual route and went straight to RB Leipzig. 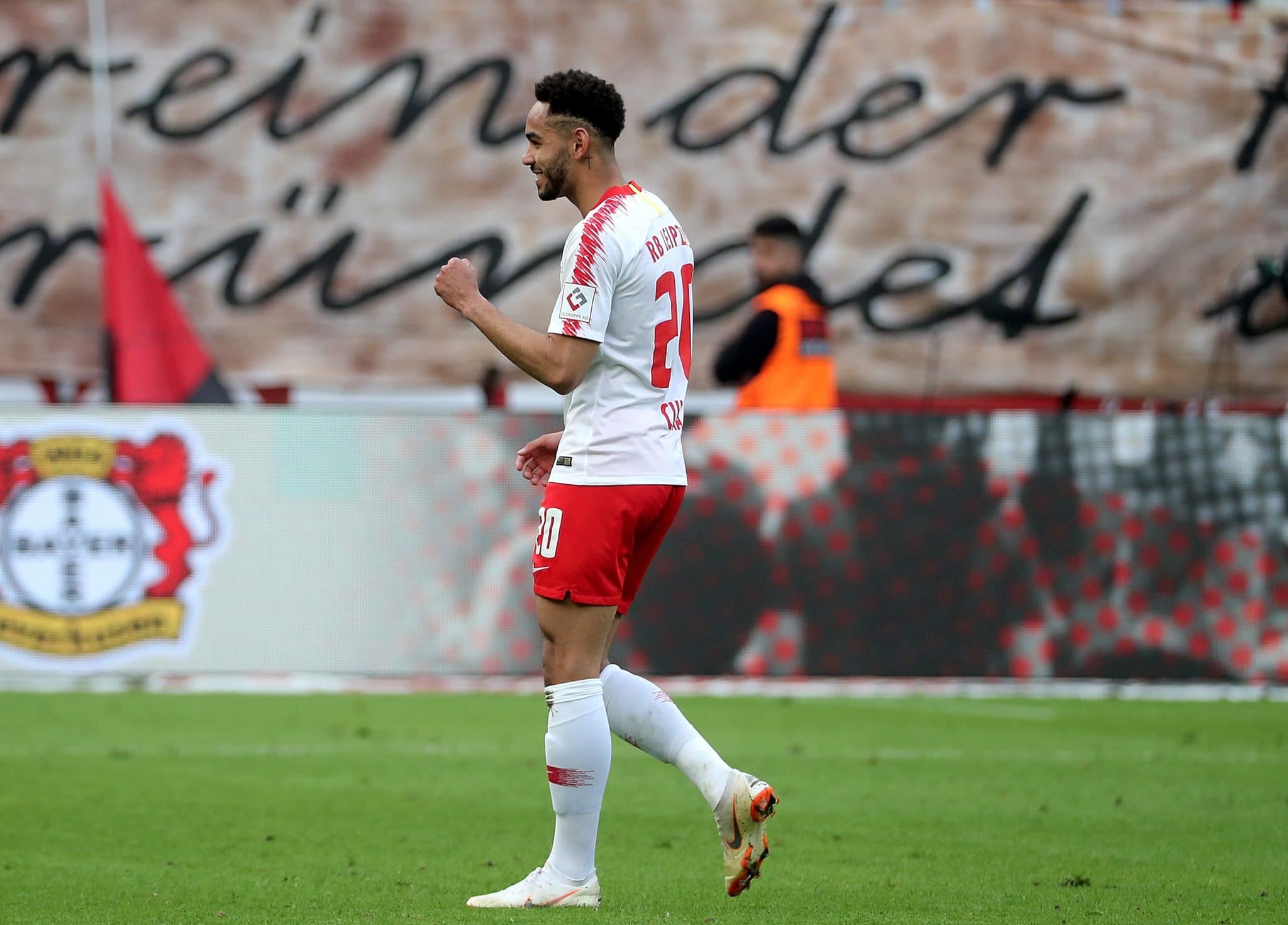 Ralf Rangnick managed Cunha's game time during his debut season in Germany. He appeared in 848 minutes in the Bundesliga, with the majority of those coming off the bench.

The German club used the Europa League as the competition to blood the 20-year-old. He played 540 minutes and netted three times as he came to terms with the way Leipzig set up and what they wanted from their two-man attack.

Deployed alongside Yussuf Poulsen and Timo Werner, Cunha acclimatised to the needs placed on him depending on the strike partner. He showcased his intelligence with subtle tweaks to his game. From dropping deeper with Werner to playing on the shoulder of the last man with Poulsen.

However, his greatest asset is his finishing ability. He's an instinctive forward, with many of his goals being one or two touch sequences. He's sharp and a danger no matter where he is on the pitch.

His goal against Leverkusen suggests he's a poacher but his finish against Hertha Berlin, on his weaker foot from 20-yards out, showed the Cunha is far from one-dimensional. 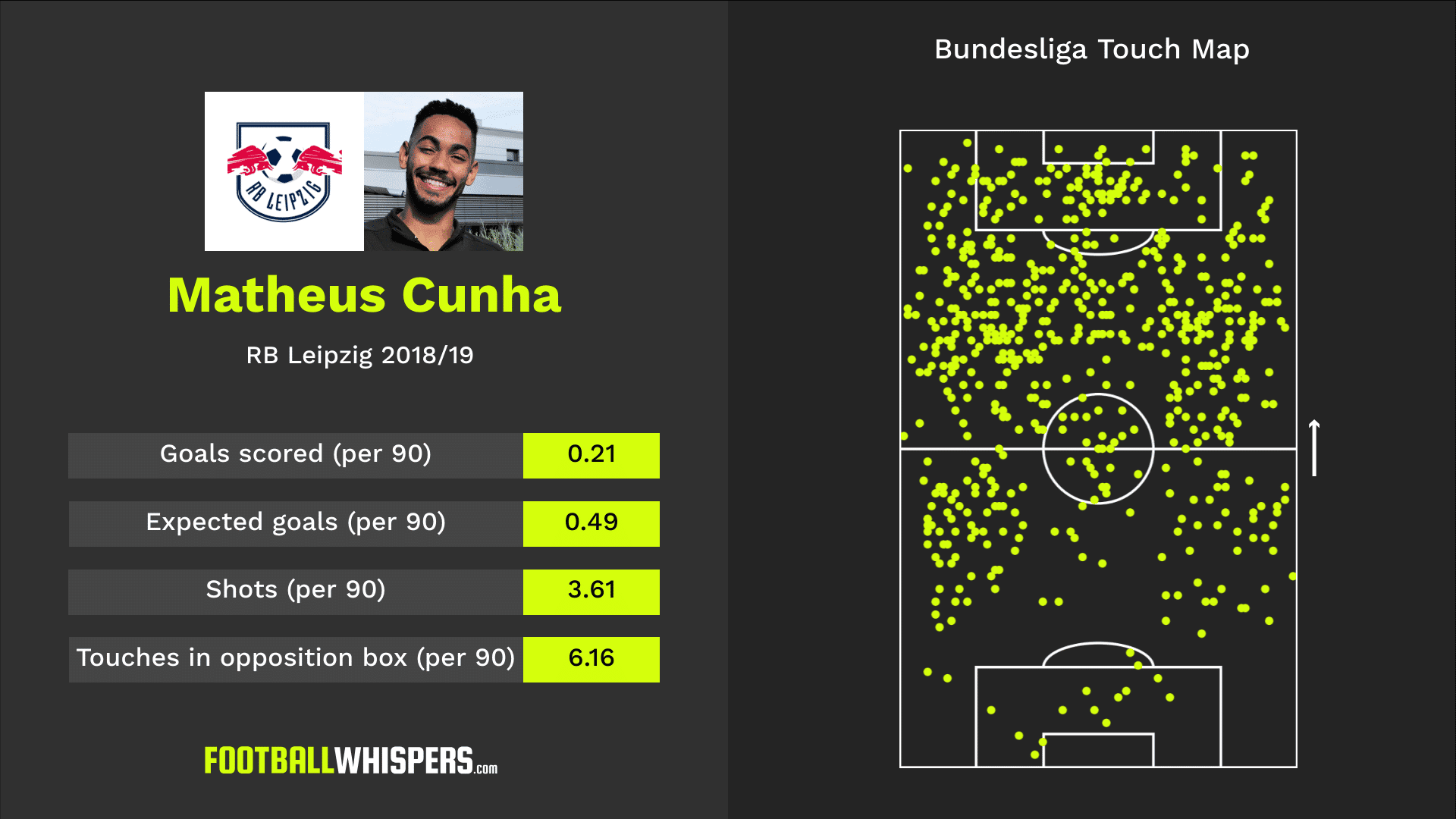 While his return of 0.21 goals per 90 isn’t anything to write home about, his expected goals average was 0.49. It highlights the fact he's an elite chance-getter for someone of his age.

He will become more clinical with greater experience. The real skill is being in the right place at the right time and he already has that. He's a high volume shooter, too, averaging 3.61 per 90, it perhaps shows just how confident he is.

Cunha is used to seeing a lot of the ball in the penalty area, too. It's often an undervalued stat but, simply put, the more touches in the box, the more dangerous a player is and the more likely they are to score.

Cunha's 6.16 touches in the opposition box per 90 is an impressive return, even more so given he is playing in a counter-attacking team. His numbers could spike to Mohamed Salah levels in a more possession-orientated dominant side.

So what's next for the young Brazilian? Well, Werner was expected to leave Leipzig this summer but reports claim he wants to stay and player under Nagelsmann before leaving for nothing next year.

The threat of losing a potent and prolific goalscorer is one that could cause problems, yet RB Leipzig already have a plan in place. They've already found a player to replace the German international when he does leave.

You can expect Cunha to be exposed to more first-team minutes this season as Nagelsmann looks to ease the overreliance on Werner. Cunha has the potential to be even better. The £50million the club received for Keïta could look like loose change if the Brazilian develops as expected and Europe's elite start showing an interest in him.