Rafa Benítez has worked wonders at St. James' Park this season. Most accept that the Spaniard's Newcastle United squad was not sufficiently bolstered following promotion from the Championship last term, yet the former Liverpool boss has steered the Magpies to mid-table, ten points clear of the drop zone.

But Benítez can't be expected to work miracles forever; Newcastle need to add Premier League quality to their ranks this summer.

Identified as a primary target, it has been reported recently that club officials have met with representatives of Bešiktaš playmaker Oğuzhan Özyakup ahead of a move for the Turkish international.

Özyakup, who was at Arsenal between 2008 and 2012, making just two senior appearances for the Gunners, is out of contract at the end of the current campaign, but the feeling in Turkey is that he will renew terms to ensure Bešiktaš receive a fee for his exit, with a £10.5million release clause reportedly agreed verbally.

Even for a club as reluctant to spend as Newcastle have been in recent years, such a fee will be inviting, represent little risk for a 25-year-old with significant resale value.

Key to Newcastle's success this term has been their organisation, remaining rigid at the back and frustrating opponents thanks to Benítez's meticulous tactical planning.

They have lacked creativity, though, a far cry from the kind of entertainment the St. James' Park faithful long for. That's where Özyakup comes in. 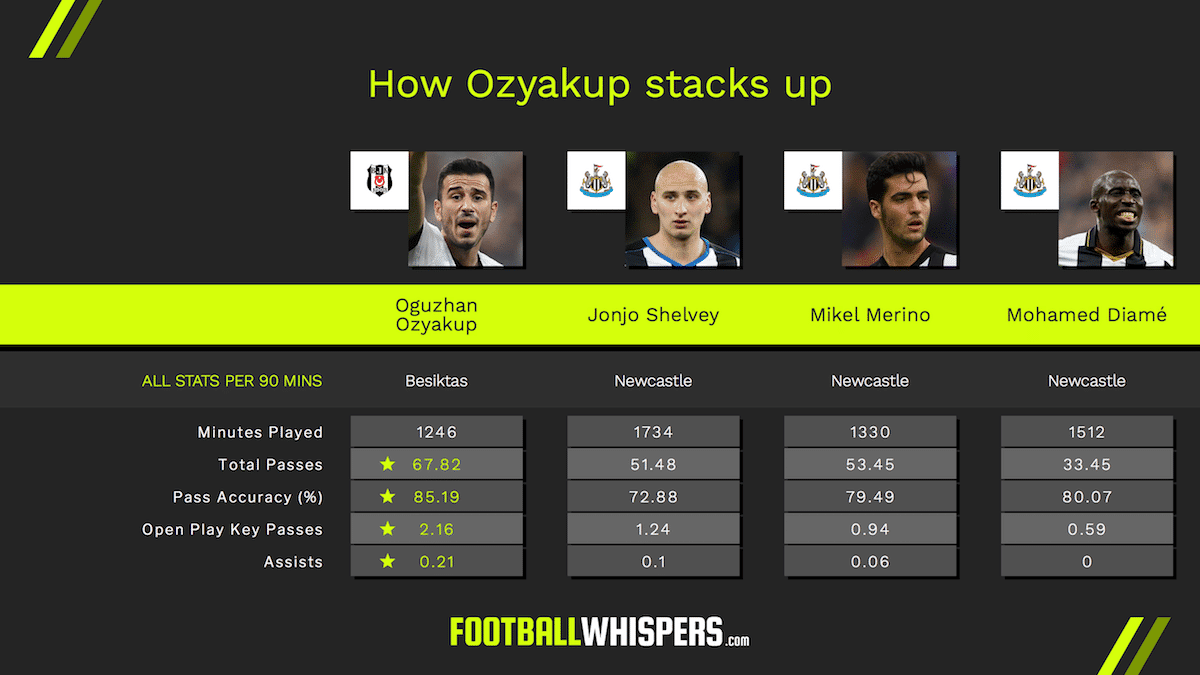 Able to play as a No.10, scheming behind a striker and poking holes in the opposition's backline, the Dutch-born playmaker is also comfortable with a deeper remit, dictating play from the base of midfield.

As the above graphic shows, Özyakup stacks up favourably against Newcastle's current central midfield options when studying key performance statistics for creativity and control.

Of course, Özyakup is currently operating within a team of higher standing in their respective division than Newcastle, and therefore benefits from more possession and is surrounded by greater comparative quality, but the gap between his statistics and his potential positional rivals is stark.

With such impressive statistics, and given his affordability – he is said to want a £45,000-a-week wage packet – the Magpies are not the only admirers of the 25-year-old, with Everton also among his suitors.

But for free, for £10.5million, or anywhere in between, Özyakup has the makings of a transformative signing for Newcastle, and it'd be a small price to pay to keep Benítez sweet.