A lot has changed for Schalke inside of a decade. Just seven years ago they were playing a Champions League semi-final against Manchester United. In the previous round Die Knappen had emphatically dispatched of Inter Milan, the then holders of the European Cup, 7-3 on aggregate.

They had Manuel Neuer between the sticks, Real Madrid legend Raul leading the line, Liverpool centre-back Joel Matip was starting as a defensive midfielder and a fresh faced 17-year-old Julian Draxler on the substitutes bench.

It was something of a revolving managerial door at Schalke but despite this they continued to be a top six team in Germany and qualified for European competition on a regular basis.

However, a 10th placed finish under Markus Weinzierl – a man tipped to be a future manager of Bayern Munich – has seen the club go into the 2017/18 season without European football to look forward to.

Schalke responded to such disappointment by participating in a summer of change. Weinzierl was shown the door, Benedikt Höwedes was stripped of the captaincy before being loaned to Juventus, while Johannes Geis, a highly rated playmaker courted by a number of Premier League clubs, left to join Sevilla on loan.

A new era at Schalke

The Bundesliga club went all in on 31-year-old manager Domenico Tedesco. The Italian isn’t a household name, yet, but it’s not stopped the club from buying into his coaching philosophy and giving him their unwavering support.

Tedesco impressed as a youth coach. He enjoyed spells with Stuttgart Under-17s and Hoffenheim Under-19s before he got his break in March 2017 with Bundesliga.2 side Erzgebirge Aue.

They were sat at the bottom of the table when he was appointed but after four wins and a draw in his opening five matches he managed to navigate them to safety.

This short spell in charge of a struggling second tier side was enough to convince Schalke that he had the potential to oversee a period of transition at the club.

Perhaps it was the performance of Hoffenheim manager Julian Nagelsmann, another young coach in the Bundesliga, during the 2016/17 campaign which helped play a part in their decision to appoint Tedesco.

Nagelsmann showed that, despite being relatively inexperienced when it comes to top flight management, he had the man management skills and tactical awareness to help players overachieve.

Hoffenheim lost key players during Nagelsmann first summer at the club and were frugal in the market compared to others yet managed to finish fourth in the league.

If the Hoffenheim manager was the prototype then Schalke have wasted no time getting in an upgrade in Tedesco. He graduated coaching school as best in class, ahead of Nagelsmann, in 2016.

He's wasted no time asserting his authority. Tedesco removed Höwedes as captain citing the fact he wasn't anywhere near match fitness and he wanted his captain to play every single game. He handed the captains armband to Ralf Fährmann, with Leon Goretzka, a Juventus transfer target, being named as vice-captain.

The centre-back then pressed for a move and got one. Juventus swooped in as they searched for a Leonardo Bonucci replacement. Tedesco had removed one big personality from the dressing room in the blink of an eye.

Then there was Geis. He moved to Scalke in 2015 in a deal reported to be worth €12million. It was viewed as a bargain after he impressed dictating play while at Mainz. However, he's failed to settle at the Veltins-Arena and Tedesco has seemingly viewed him as a player the squad could do without.

“It wasn't our plan for Geisi to leave,” Schalke's sporting director Christian Heidel explained. “He came to us [on Wednesday] night and asked us to give him the opportunity to go to Sevilla for ten months. After careful consideration, we decided to grant his wish.”

Geis pushed for a move after failing to start in the opening to matches of the season. Tedesco opted to use Goretzka and former Tottenham Hotspur midfielder Nabil Bentaleb as his two in midfield with highly-rated 19-year-old Weston McKennie getting the nod off the bench.

Tedesco is known to be obsessive. “He’s very meticulous,” explained 27-year-old Aue forward Dimitrij Nazarov. “He has all the information on the opposition. Some details even surprised me, and I’ve been around a good while. We always played attacking football, too. The coach stuck by that regardless of the opposition. It’s great fun for every footballer who plays under him.”

You can tell why. During an Interview last season Tedesco revealed his thought process: “If I have to choose between winning 4-3 and 1-0, I'd take 4-0.”

He might not strike many as an attacking coach given in the two Bundesliga matches so far this season they've lined up in a 5-2-3 formation. But tactics are just a guide, it's all about the system and the instructions given to the players. 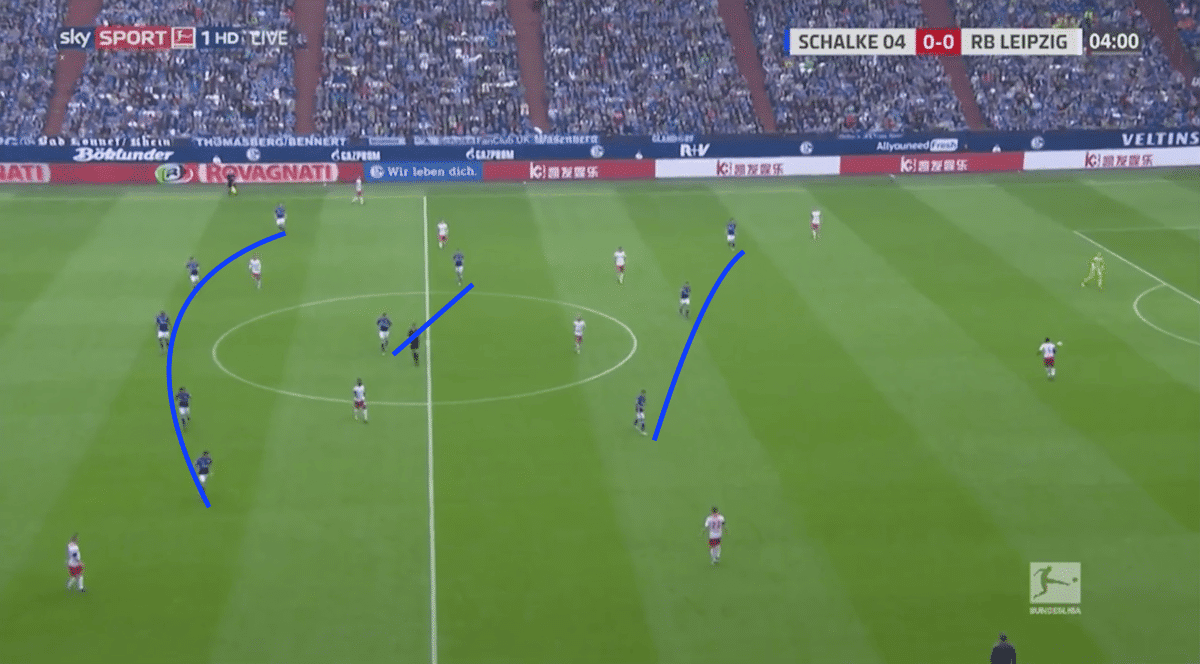 In the picture above you can see Schalke's basic shape. This taken from their opening game of the season, a 2-0 win over RB Leipzig.

Tedesco's men aren't unfamiliar with the system having used a variation of it under Weinzierl last season. This time around, however, they put a lot more weight in overloading central areas.

The attacking three are narrow with the width coming from the wing-backs. Daniel Caliguiri, a midfielder by trade, is operating on the right side with Bastian Oczipka, a versatile defender capable of playing in midfield, making the left flank his own.

Tedesco has purposely picked multifunctional players meaning they're able to operate in a number of different ways. Both wide attacking players are just as comfortable hugging the touchline as they are playing almost as a 10. 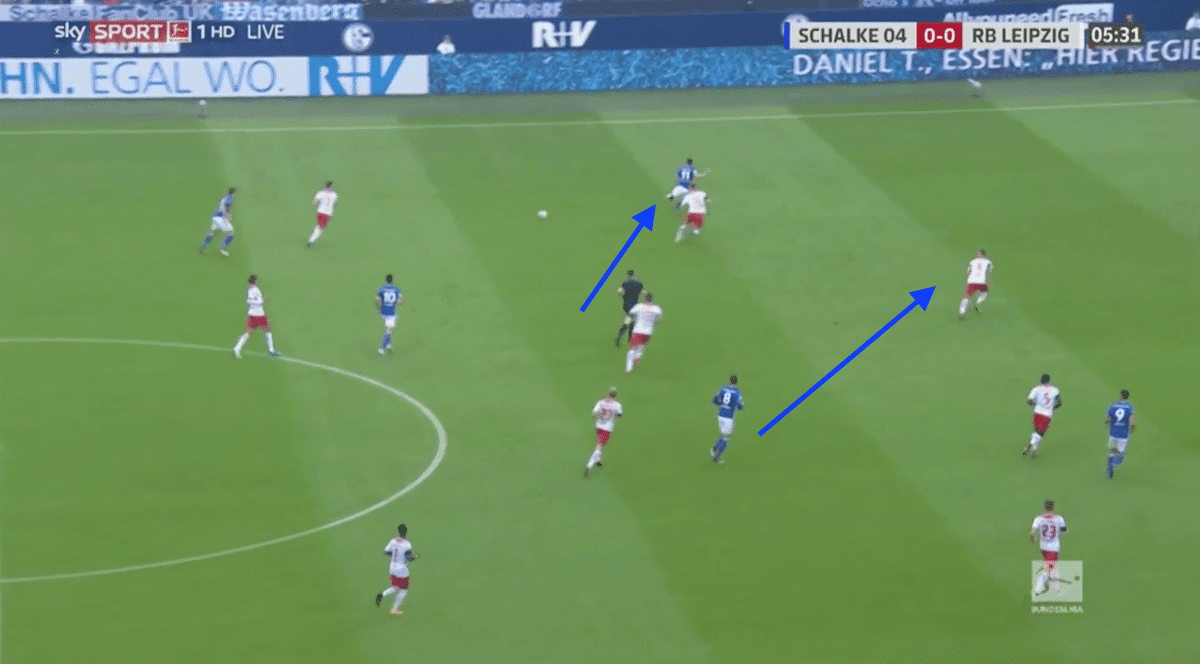 Despite being just two matches into the season there's already an understanding between the players and an appreciation for what Tedesco wants. You see this in the above picture. Yevhen Konoplyanka pushes into a wide area and Goretzka looks to fill the space the Ukrainian as vacated ensuring they have three attacking players in central areas.

Bentaleb holds his position in midfield and Caliguiri, just off screen, drifts inside a little to cover for the advanced Goretzka.

The more they play together the more seamless such moves will be and the more effective Schalke will be. There's a lot of intrigue surrounding the club and exactly what Tedesco can do there. They're definitely a team to keep a close eye on this season.

Missing out on European football may in fact have been a blessing in disguise. Perhaps going backwards was the only way they could truly go forward. The club might be back playing European football next season with a long-term project well underway.