Troyes is set to meet Rennes at a time when the visitors are having their best run over many seasons. While people may view Troyes as minnows in this fixture, the home team should be confident enough to cause problems to the most inform Ligue 1 team in match week 12.  We have analysed this match based on the current form as well as past head-to-head encounters between the teams.

Troyes vs Rennes: Our Best Three Picks and Betting Odds

Note: These odds from Netbet were correct at the time of writing.

When Rennes defeated PSG, on 03/10/21, people thought it was by chance. However, excelling in the European championship as well as in the domestic league means this is a team with higher aspirations. Besides, in the last four meetings between these teams, Rennes has never lost to Troyes in the last four meetings (2wins and 2draws). Moreover, given the current form of the away team, it is fair to predict that it will get better than the home team which was second best in the last match it had with Nice.

Both teams to score: Yes

This market gives high value for punters and one would be fearful to predict that there will be goals at both ends of the pitch. For instance, Rennes made life very unbearable for the current league table holders who left the pitch with few shots on target. However, the home team in this fixture seems to be motivated to put the ball away especially while playing at home. Indeed, they managed to do that against record holders of Parc. de Prince. Given the current form of the visitors, it goes without saying that the chances of scoring in this match are very high.

Once it is predicted that both teams will see the back of the opposition’s net and that the away team is likely to win the fixture, the implication is that there will be over 2.5 goals in the game. This can also be justified based on the manner in which Rennes performed during their last away match against Metz on 17th October 2021 where they scored 3 goals to no reply in the first 45 minutes.

Rennes is sixth in Ligue 1 and only a point shy of fifth spot. Winning this fixture should be the main priority of the visitors, especially with the fifth place now qualifying for Europa Conference League. The visitors have the second-best defence in Ligue 1 after Nice, having leaked only 9 goals in 11 matches. Moreover, the visitors have a better scoring record than Troyes. The hosts have scored 11 goals while Rennes has 16 goals in 11 matches. The hosts have suffered defensively after leaking 15 goals so far.  The hosts have struggled to score goals at home, which is the same scenario with Rennes performance on the road. This should be a fairly even game given that both teams have 6W in previous meetings. Seven encounters ended in a draw.

FAQs about Troyes vs Rennes 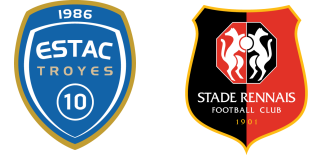 When is the match between Troyes and Rennes scheduled to take place?

What were the scores when these teams last met in the top-tier division?

These teams last went head-to-head in 2017/2018 season in the French league 1 and the results ended 2-0 in favour of Rennes.

Where will the match between Troyes and Rennes be played?

The game will be played at Stade de l’Aube stadium in the city of Troyes.