Scoring a double at Wembley Stadium against current Champions League holders Real Madrid has put Dele Alli on most on Thursday’s back pages. Deservedly so.

However, another Tottenham Hotspur player caught the eye on Wednesday night and was crucial to Mauricio Pochettino’s side handing the Spaniards their first group stage defeat in five years.

The warning signs were there early on, when Kieran Trippier volleyed in a teasing cross looking for Alli. Real didn’t learn their lesson.

Just before the half-hour mark, great vision and execution from Harry Winks picked out another dangerous Trippier run, the full-back met it first time and Alli made no mistake at the second ask.

Faced up against Marcelo, long held as one of the best attacking full-backs in the world even if his form may be under question this term, it was Spurs’ 27-year-old who looked head and shoulders ahead of the Brazilian.

Despite the London club signing Serge Aurier to replace £50million departure Kyle Walker, there is a case to suggest the Ivorian should be the understudy at Wembley, with Trippier establishing himself as one of the best right-backs, not just in England, but in Europe.

On Wednesday, he led Spurs’ players with 69 touches, finishing with three key passes, four interceptions, five clearances and four crosses. It was a superb night, and Trippier was exceptional.

“We’ve been working really hard this week, tactically. Coming off a difficult result against Man United, we knew we had to put the result right tonight,” he told Spurs' official website after the game.

“I try and create as much as I can for my team-mates. We all know each other’s positions, we all have a great understanding, and Dele was there to slot it in.”

His performance should be no surprise to anyone who has watched the right-back come from his loan spell at Barnsley while on the books at Manchester City, to his three years at Burnley, developing under Sean Dyche, onto his 2015 transfer to North London.

At a cost of just £3.5million, he should go down as one of Daniel Levy’s best pieces of business. 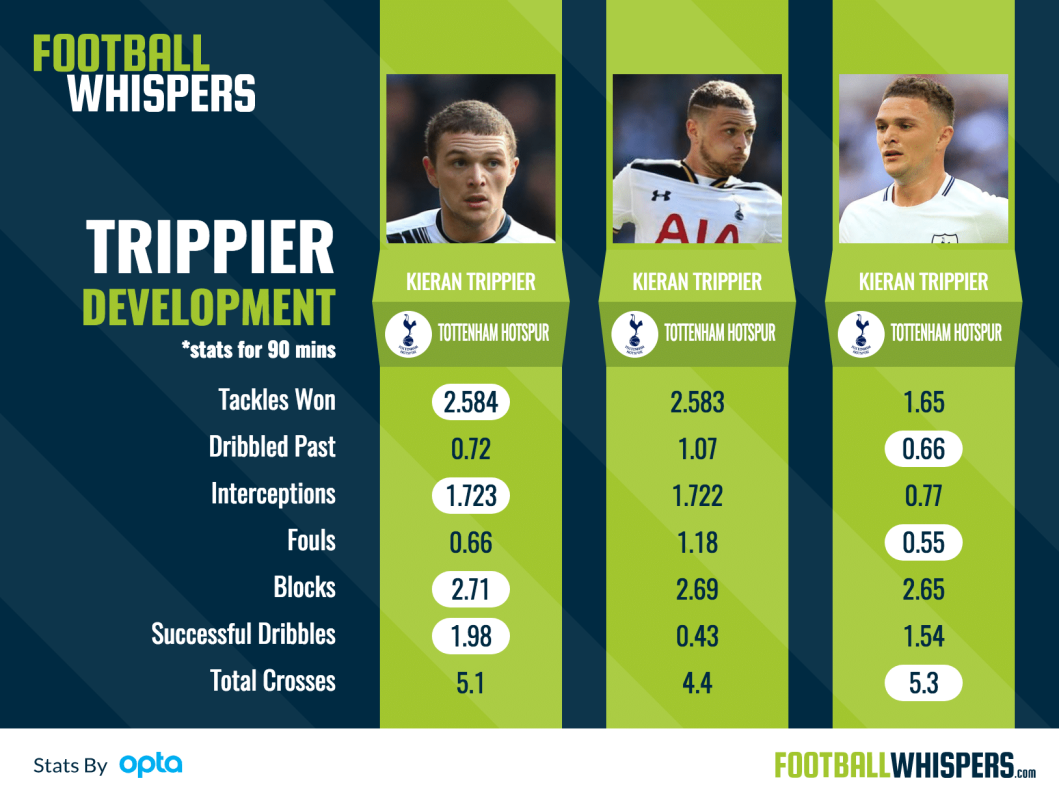 Since arriving at Spurs his level has been extremely high. Statistically, last term was his poorest return, although he did finish with five assists.

Combining his numbers for both his European and Premier League appearances, he won 2.58 tackles per 90 minutes, which has dipped slightly since, as have his numbers for interceptions.

That can be explained by the change in position, from a flat four to the wing-back role which looks tailor-made for the Englishman.

It has also seen a decrease in the number of times opponents are allowed to get past him, and seen him commit even fewer fouls.

Consistently, season after season, Trippier has performed very well in terms of blocks and, most importantly, getting the ball into the box.

Not only has he been consistent across the board, but his numbers show improvements year after year.

Best in the Premier League

This season, with Walker joining Pep Guardiola’s revolution and the pressure coming from Aurier, Trippier has stepped up again and stands out as the best right-back in the Premier League. 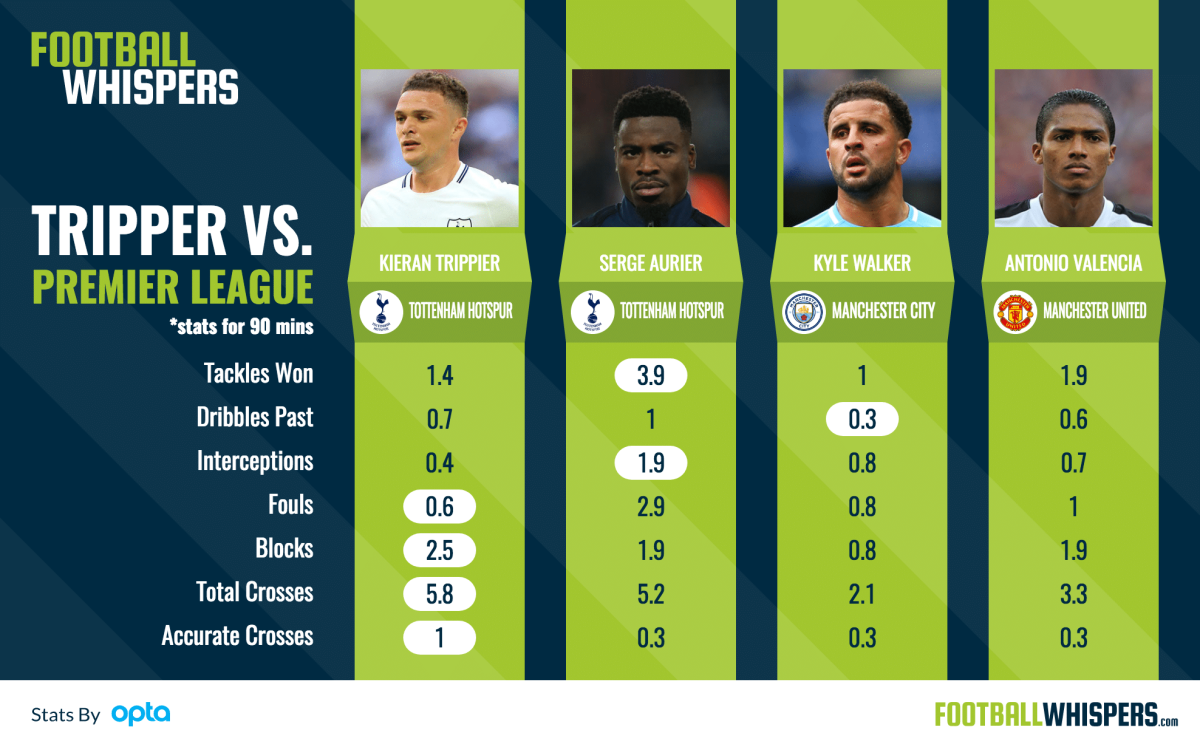 His Ivorian team-mate wins more tackles, that’s something that Aurier has always done well since back in his Toulouse days, but he also gets beaten more and commits more fouls.

Ranked against Aurier, Walker and Manchester United’s Antonio Valencia, the 27-year-old is just behind in the defensive categories, but excels where you need him most.

None of the other three make fewer fouls, Trippier also makes more blocks, at 2.5 per 90 minutes. He attempts more crosses than the others and is more accurate, with one per 90 finding it’s mark. The others only manage 0.3 per 90.

Already he has found the mark with four assists this term, just one behind last season’s Premier League total.

Casting the net a little wider and looking at some of the best right-backs in Europe, Trippier isn’t as dominant, but he holds his own and doesn’t look out of place beside Joshua Kimmich, Daniel Carvajal and Dani Alves. 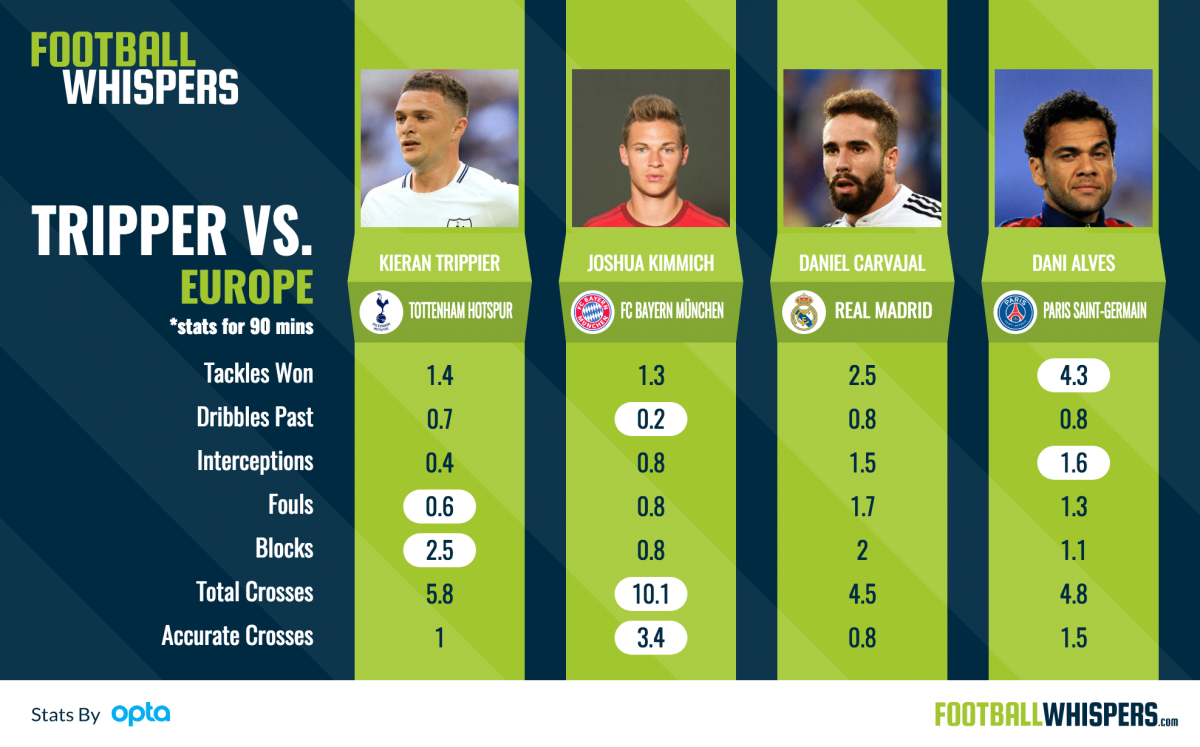 Again, Dani Alves makes more tackles, but attackers get past him more than Trippier and he makes more than double the amount of fouls.

Over at Bayern Munich, Kimmich is establishing himself as the best right-back around this season, especially going forward. The German attempts 10.1 crosses per 90, completing 3.4 of those attempts.

Although he is finding the mark three times more than the Spurs defender, in terms of expected assists, the Englishman is just behind with 1.72 to 1.81. That still puts him above Carvajal and Dani Alves.

At 27 years old, it’s not like Trippier is a young prospect: this is now the peak time in his career and he is playing to a very high level.

Easily the most exciting full-back in the Spurs team, you could argue he is not only the best in the Premier League, but his performances in the Champions League have helped establish Trippier as one of the best in Europe.