Captain, leading scorer and perhaps the only player within the squad who can lay an indisputable claim to being of a world-class level, Harry Kane is delivering for England at the World Cup in Russia.

While the Three Lions skipper is leading by example, currently the frontrunner for the Golden Boot with six goals, he's not the only England player delivering on football's grandest stage: Tottenham Hotspur team-mate Kieran Trippier has been outstanding, too.

That the Bury-born full-back would enjoy a top-level career wasn't always certain, starting out in Manchester City‘s academy before being loaned and then, in 2011, sold to Championship Burnley without ever making a first-team appearance for the current Premier League champions.

But the 27-year-old's ascent in recent years has been rapid, his fine work in helping Burnley up to the top tier rewarded with a 2015 move to Spurs, where last season he became the top pick for the right side of defence after initially appearing forever consigned to a back-up role. 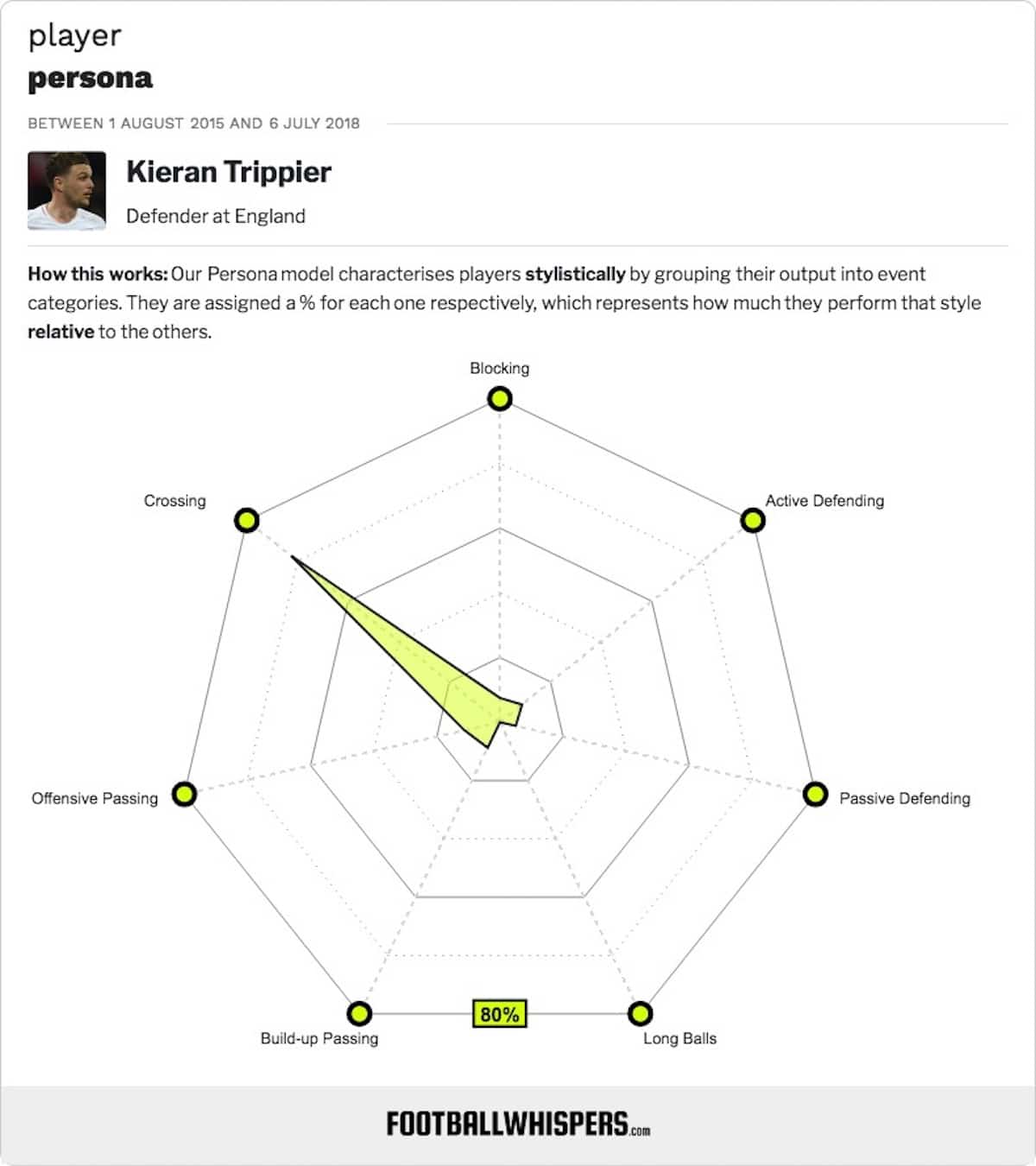 For England too, Trippier is not only the clear choice to start in his position, he is trusted with being sole provider of the team's width on the right from his wing-back berth.

And, in many ways, Trippier's rise to prominence with club and country has come somewhat by accident.

While there was no fortune to his development and refinement with Burnley, where he honed his now-trademark crossing skills, were it not for Kyle Walker surprising Tottenham with a transfer request last summer, pushing through a £50million switch to Manchester City, Trippier would likely still be considered a deputy to his England colleague.

On the international stage, Trippier has again benefitted from a move for Walker, this time with the former Sheffield United defender's adjustment from right-back to right-sided centre-back as Gareth Southgate implemented a back-three system for the Three Lions.

Had England possessed a natural centre-back with the recovery pace Southgate clearly values in Walker, Trippier might have struggled to make it off the bench at the World Cup.

But they don't have such a player, and Walker's move opened up the right wing-back slot for Trippier which, more than simply getting the Spurs man in the team, granted him the freedom of the right flank, offering the platform upon which he has shone for England in Russia.

By the end of the round of sixteen, following England's penalty shootout win over Colombia, Trippier had created 12 chances at the World Cup, a return only two players –- established superstar creators Neymar (16) and Kevin De Bruyne (13) – have bettered.

With a right-footed delivery recalling images of David Beckham in England white, Trippier, whether from set pieces or open play, has been the only dependable supplyline for the forwards in a Three Lions side otherwise devoid of creativity.

Such a lack of natural creativity within the team – Kane's six goals have come from just nine total shots, three of which penalties and one a Ruben Loftus-Cheek effort which deflected in off his heel against Panama – has meant dead-ball situations have been a big focus for England, looking to maximise the aerial prowess of the likes of John Stones and Harry Maguire through savvy movement patterns.

Without consistent and reliable execution of the free-kicks and corners themselves, however, such tactics are rendered useless. This is the side of the bargain Trippier holds up: time and again he has put the ball right on the money.

Although he has only directly contributed one assist, his menacing deliveries have been responsible for many more goals, with England's set pieces geared around Kane being first to second balls and knockdowns.

The growing confidence within Trippier is evident, too. Relishing his newfound key-player status, he carries possession almost with an extra spring in his heels, and the way he fired home his spot kick against Sweden showcased how self-belief has become as big an asset as technique and stamina for the 27-year-old.

Key to Trippier's rise, beyond his persistence and determination to make it back to the elite level after being let go by City, has been his continual ability to maximise the chances that have come his way.

Sure, Walker's move to City thrust him into the Spurs first team, but his performances kept him there and saw off the threat summer signing Serge Aurier posed to his place; and a tactical rejig gave him his England spot, but his outstanding form in Russia has made him one of the first names on the team-sheet, regardless of formation.

After four seasons in the Championship, many would have given up on the Premier League dream; few would have seen six years pass after their final under-21 appearance and believe a senior international career was still on the cards. Trippier's career path has meandered, but he's at the top now on merit.