“Nobody wants to grow up to be a Gary Neville. You’re either a failed winger or a failed centre-back. You end up there by hook or by crook.”

Jamie Carragher was right when he uttered those words in 2013. Back then, full-backs weren’t special. They completed a defence, built around the existing centre-backs, but weren’t considered key to whether or not a defensive unit was successful.

Teams steered away from making full-backs a key part of their attacks, too. Yes, the likes of Neville would contribute in the final third, often in the shape of an overlap. But they weren’t tasked with being a creative force.

That was unthinkable. For some it still is today.

But not for Liverpool.

Trent Alexander-Arnold is arguably the Reds’ most creative player. He pulls the strings from right-back and has a remarkable 14 Premier League assists to his name since the start of the 2018/19 season kicked off.

Andrew Robertson is just as productive on the other flank but the Scotland captain has a different role. He’s more of a traditional winger whereas Alexander-Arnold is often operating as a deep-lying playmaker.

With it becoming abundantly clear he was a key cog in the Liverpool system, the Reds have tweaked their style this season.

The change doesn’t solely benefit their No.66 but he profits from it along with other important players.

By having Mohamed Salah and Sadio Mané hugging the touchline more than usual it isolates them against full-backs. The duo are given more space to attack and look just as potent as they did when instructed to drift centrally.

Roberto Firmino is looking sharper than ever before and this could be down to having a larger area to exploit in the centre of the pitch.

Some changes take time to adapt to. Thankfully for Jürgen Klopp, his players seem to be up to speed with what he wants. 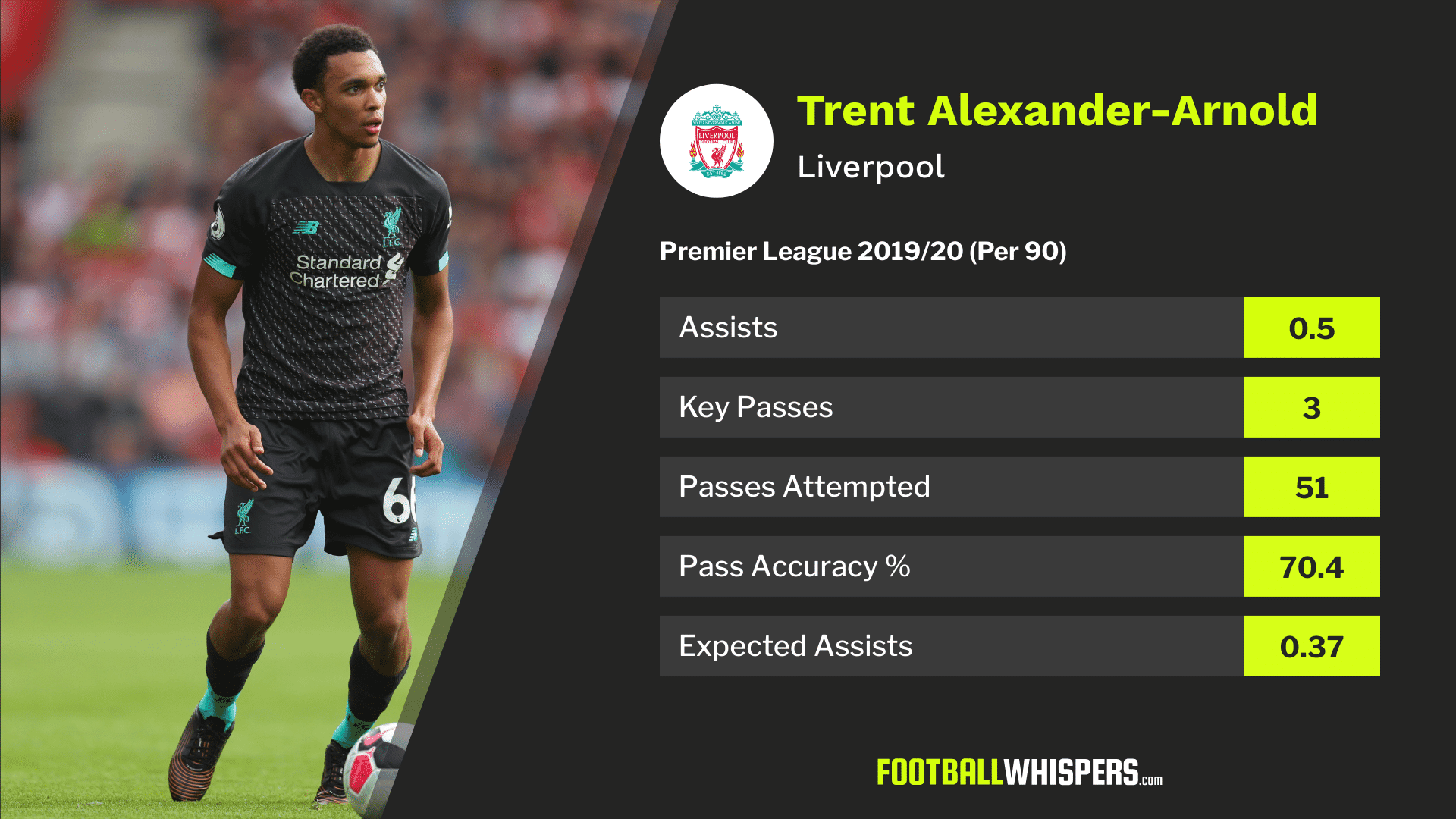 Alexander-Arnold has averaged 0.5 assists per 90 in this fledgling 2019/20 campaign. He’s playing three key passes and has an expected assists average of 0.37.

The 20-year-old is outperforming but his average is still fairly high. In fact, only six players who have appeared in 100 minutes or more this season can better it and only one of those is a Liverpool player – Mané.

The England international is heavily involved in play, averaging 51 passes per 90, and while his pass accuracy of 70.4 per cent doesn’t seem overly impressive, it is worth remembering that the Liverpool right-back plays risky passes. 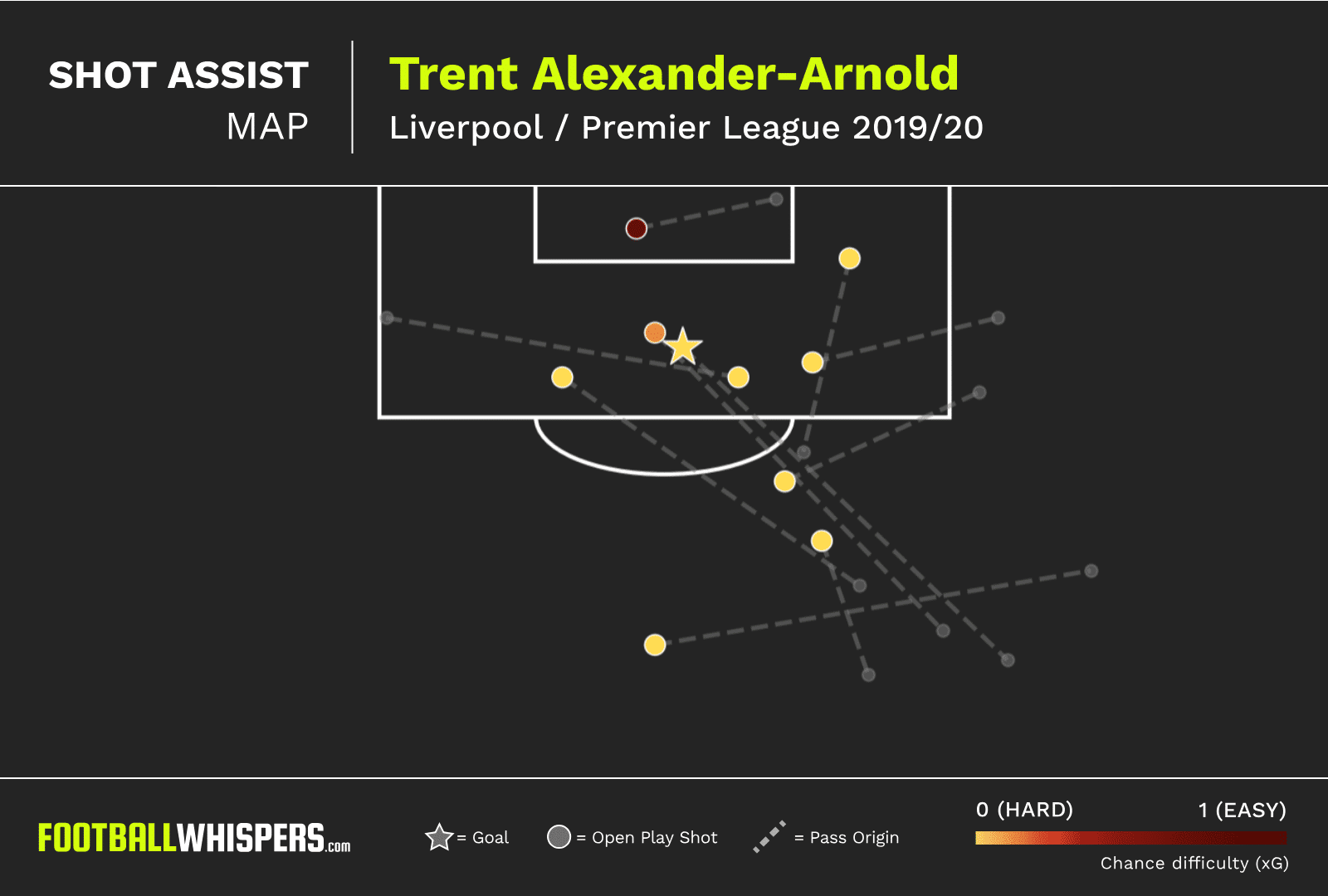 The change in system has resulted in a change in where Alexander-Arnold dictates proceedings from. Whereas last season he'd be advanced in the final third, this time around he's deeper and more central, as shown in his shot assist map above.

This highlights all of the passes he's played in open-play which have resulted in efforts on goal.

The majority are coming from areas you'd usually expect a creative midfielder to be housed. It's a position Kevin De Bruyne has claimed for Manchester City and one from which he does the most damage from when he's able to angle balls into the penalty area.

Its clear Alexander-Arnold has adopted a similar tactic with his deliveries into the area and Klopp is doing the best to get his right-back onto the ball in that zone of the pitch.

The Liverpool No.66's future is always a hot topic of debate amongst fans. Is he wasted at right-back? Perhaps he would've been in the past but the right-back position, especially in this Klopp system, is one of the most important cogs.

He's more creative than most midfielders because of the hybrid role he's been allowed to play.

Youngsters might not have dreamed about growing up to be Neville but plenty will grow up wanting to be the next Alexander-Arnold. He's helped change the role of full-back completely. His position is now one of the most desirable in football.