Trent Alexander-Arnold is a special talent.

So special, in fact, that some believe the quick-thinking hero against Barcelona is being wasted at right-back. There are those who think the 20-year-old should return to midfield, a position he filled as a youngster, to really fulfil his potential.

Some feel it’s his destiny.

There’s a belief that he’s going to one day captain Liverpool to many trophies and that he’s best placed doing that from the centre of the pitch. Just as Steven Gerrard did.

They cite the fact the Reds legend started out in the first-team as a right-back before finding his home in midfield as a reason the same thing could happen to Alexander-Arnold.

And while that was the case for Gerrard, he never looked a natural at full-back and a move to midfield was inevitable. Whereas the Liverpool No.66 is already one of the best in the world in that role, despite being a teenager up until seven months ago.

You could move him there to play as a six or as an eight, but then you potentially lose his uniqueness and turn him into just another midfielder. Yes, he has the vision. He can execute passes some players can only dream up in their heads. He’s got the energy to cover the ground, too. But so have countless other midfielders.

And, yes, Pep Lijnders, Jürgen Klopp's assistant coach, did once call him his Rúben Neves, undoubtedly a huge compliment, but he can still be one of Liverpool’s tempo setters from a right-back position.

The truth, however, is that while Alexander-Arnold has everything needed to be a midfielder for a top-six Premier League side, he’s arguably the perfect modern-day full-back. As a right-back, he’s priceless. As a midfielder, he simply isn’t. 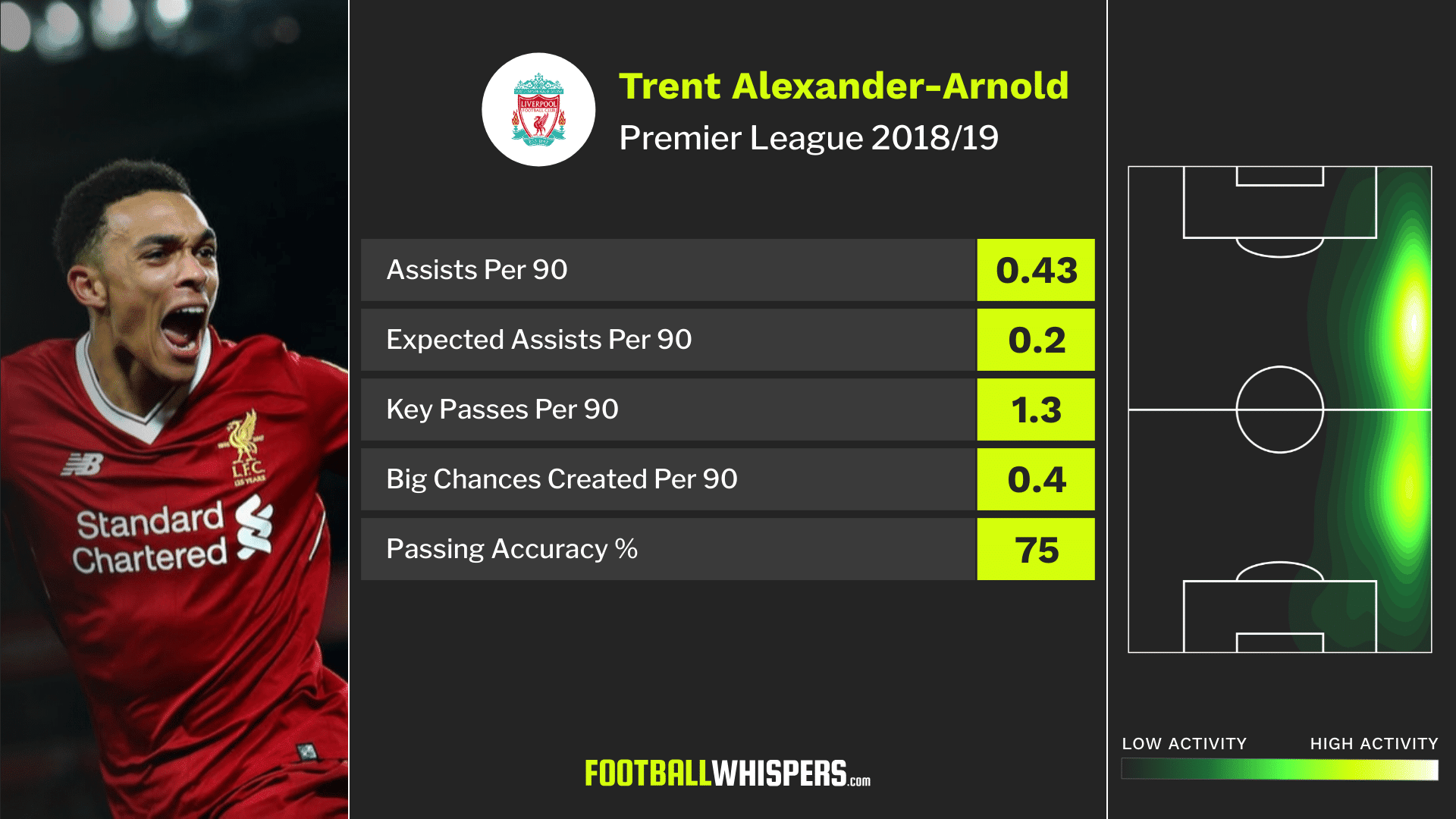 In the final few weeks of the 2018/19 season, Alexander-Arnold really came into his own. He was having a direct impact on results for Liverpool. In his last nine starts for the Reds, he assisted 11 goals, including six in matches against Newcastle United, Barcelona and Wolverhampton Wanderers.

With a Champions League final still to come he could add to that tally of assists but as things stand only six players across the top five leagues can better his tally of 12 in the Premier League and none of them play as a full-back.

What makes the Liverpool man standout from his peers is his intelligence.

If you had to pick a performance to epitomise Alexander-Arnold as a player it would be the one against Barcelona.

Purely because his second assist of the night showed he isn't just a player who looks to put the ball into dangerous areas. It's a phrase used by commentators and it is perhaps a bit dated these days.

In the past, putting the ball into the danger zone was required when teams had target men or poachers. Full-backs and wide players did their part and if nobody was there to finish off then it wasn't their problem. But these days the final ball has to be more precise.

With Alexander-Arnold, you get just that. Precision.

Against Barcelona, he spotted the opportunity to play in Divock Origi and he weighted the pass to perfection. That was from a set piece but he's done it in open play multiple times this season.

His cross for Mohamed Salah to net against Newcastle United was on the money. Likewise, the pass he played for Wijnaldum to score against Cardiff City. The through ball for Salah against Porto. The ball across the face of goal for Roberto Firmino to tap home against Porto in the home fixture.

He makes all of them look easy when they're far from it. You don't get that sort of quality from other right-backs and moving him into midfield makes Liverpool a little easier to control and contain.

He's one of the best right-backs in the world right now. Give him another couple of seasons there and he will be peerless.