It’s probably difficult to have any regrets when you’ve won the World Cup multiple times and are generally looked upon as the greatest footballer ever to have lived, but surely the fact that Pelé’s only appearance on these shores was the fruitless World Cup campaign of 1966 has to be one — or was it?

Ask most people about their memories of Edson Arantes do Nascimento playing in England and they will usually refer back to that tournament in the summer of ’66, a competition which Brazil and their famed striker were quite literally kicked out of, as England went on to lift the Jules Rimet trophy to become champions of the world.

Yes, the disastrous 1966 World Cup was Pelé’s only competitive appearance in the UK, but that only tells half the story as the star actually graced football grounds the length of the country for his club Santos many times, thrilling fans and pulling in crowds from Plymouth to Sheffield in what was nothing short of a callous money making exercise.

Football clubs looking to make a quick quid and cash in on their global popularity isn't a new phenomenon  and for every modern day case of clubs choosing cash over fan loyalty or player well-being there is an example from history to suggest it has all been done before and the exploits of Santos was no exception.

In the 1950s Santos were nothing short of ordinary. They had bagged just one regional title dating back to the 1930s but a group of homegrown players would eventually come through the ranks and help them claim back-to-back league title in 1955 and 1956 – boosting their profile, not just in their native Brazil, but around the world too.

So by the time Pelé burst onto the scene in 1956, they were already a force to be reckoned with. In his time at the club he would help to land a mere ten more state titles, six national championships and two Copa Libertadores, including an incredible treble in 1961.

However, despite being something of a force on the field, off the pitch Santos were a club with little to show for what success they had achieved. Their ground was small and run-down, meaning they often had to play bigger games at larger stadiums and their training facilities were virtually non-existent.

Their earning potential might have been somewhat limited in Brazil, but around the world their star-studded line-up provided some real stardust to an audience who couldn't get enough of Brazilian football, much of which could only be seen on grainy black and white televisions every four years when the World Cup rolled around.

The only problem was, to capitalise on this world-wide appeal Santos needed to become something of a touring act and take the circus to the people if they couldn’t come to them. This is exactly what they did, with Pelé very much the ringmaster.

Between May of 1959 and the beginning of July that year, they played 22 matches across Europe, including games against giants of the game like Real Madrid and Barcelona; so it wasn’t long before the Santos bandwagon eventually rolled up in England.

“We were in demand,” wrote Pelé in his autobiography. “The suits were very keen to cash in. There was no time to relax; there was barely enough time to travel from stadium to stadium.”

Perhaps the last place most people would have expected Pelé and friends to turn up on their first tour of England in 1962 was Sheffield Wednesday’s Hillsborough ground, but a crowd of over 50,000 turned up to see the mid-table Owls beaten 4-2 by their South American visitors. 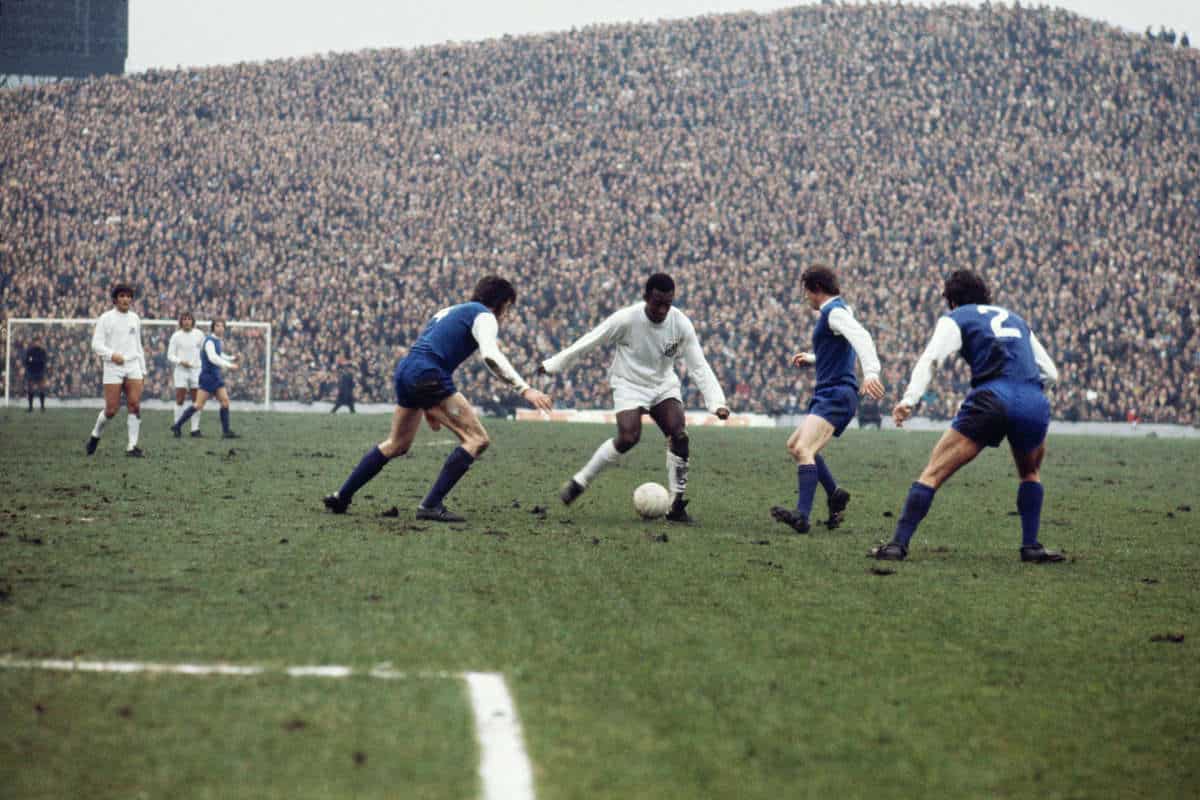 Santos were greeted more like visitors from outer space than circus performers, as players who most people had only seen or read about in newspaper monochrome took the field before them in full and glorious Technicolor. They didn’t disappoint either with, Coutinho grabbing a thrilling hat-trick and Pelé, who else? scoring a penalty.

Santos took something of a break from playing in England, preferring to visit countries who were more willing to pay the reported appearance fee of £12,000, a sum that also guaranteed Pelé's appearance, but by 1969 they were in ‘Blighty' once again, this time to play Stoke City — who presumably were more than happy to stump up the 12 grand bounty.

Stoke were sixth in the First Division table at the time, and had something of a backlog of fixtures to get through, even so, they had no hesitation when it came to playing a friendly game in against the Brazilians while also fielding a full-strength side.

With the game finely balanced at 2-2 and with ten minutes remaining, it was fittingly Pelé who brought the house down with a glorious winner. Faced with four defenders on the edge of the box, he suddenly had space and gave Banks no chance with his finish, leading to hundreds of fans swarming on to the pitch in good-natured celebration at the final whistle.

Three years later and Santos were back in England once more when they were finally beaten on English soil, surprisingly enough by Aston Villa, who were a Third Division outfit, as 54,500 fans attended Villa Park to see Pelé’s side go down 2-1.

Pat McMahon's header gave the home side and early lead and a spot-kick by Ray Graydon added to the tally, though the goal of the game, not surprisingly, came from Santos as Edu  fired an unstoppable, swerving shot from 25 yards.

His side may have lost 2-1 but it was Pelé who stole the show, and The Birmingham Post’s Jeff Farmer wrote: “It didn’t matter that Villa’s generator was managing to power only three of the floodlight pylons, Pelé was making up for the other.”

When Santos returned to Hillsborough in 1972 for a rematch with Sheffield Wednesday they beat the Owls 2-0. Remarkably the game was played at 2.30 on a Wednesday afternoon in February, but that didn't stop a crowd of almost 37,000 turning up.

Energy restrictions caused by ongoing industrial action by miners meant that an evening kick-off was impossible in the depths of winter, but the chance to see some of the greatest players on the planet in person was obviously worth throwing a “sickie” for.

There was no end to Santos's willingness to cash in and it really was a case of, “have ball, will travel.” They would agree to play West Ham in New York and Newcastle in Hong Kong, but their last ‘tour of duty' was in 1973, when they arrived for two games against Fulham and Plymouth Argyle.

The clash with Fulham had been overshadowed after a disagreement as to how many people were actually in Craven Cottage that night as, by now, Santos were not just being payed to turn up, but also demanding a cut of the gate too.

When the game finally did kick-off it was Pelé who put Santos ahead from the penalty spot, but the Cottagers fought back. Midfielder Alan Pinkney on hand to score the equalizer while striker Steve Earle scored the winning goal.

Not only memorable for the shock result, but that game with Fulham was also notable for being the one and only time that the greatest player the world had ever played in London. 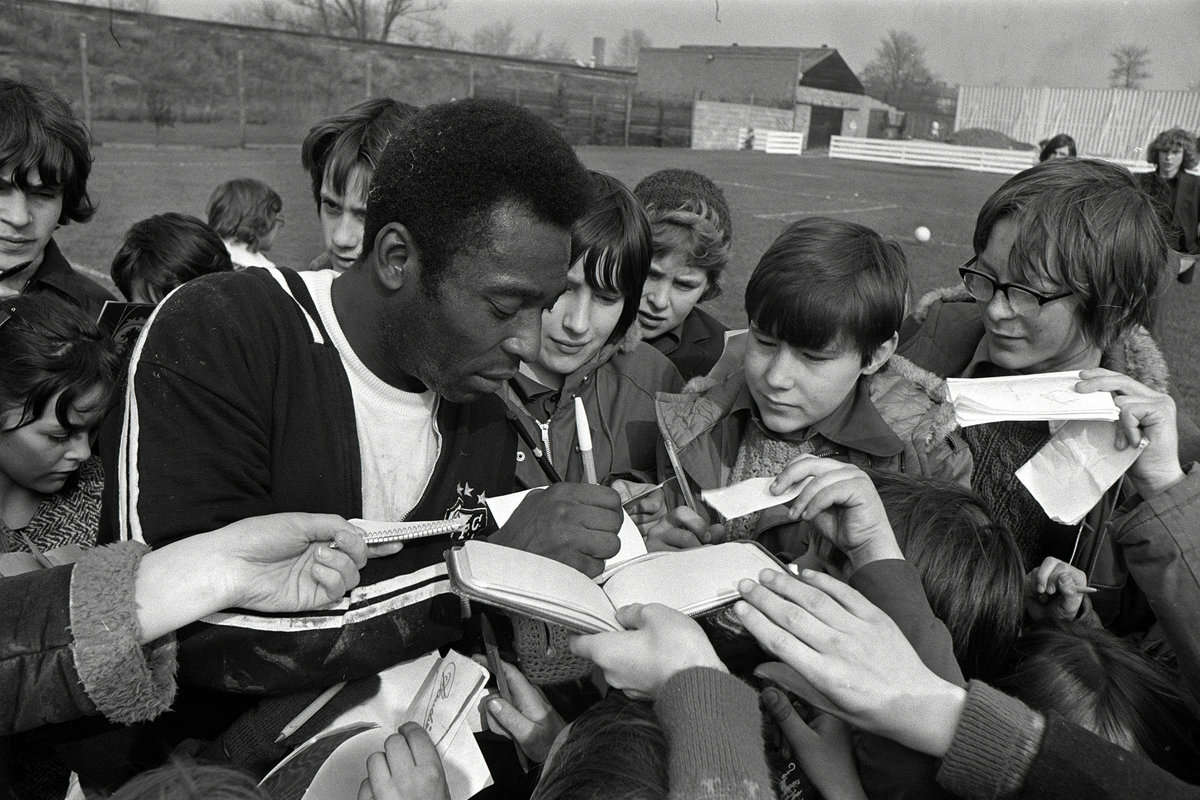 The same arrangement was in place when Santos travelled to Plymouth but, feeling they were missing out somewhat on the cash that was being taken at the turnstiles, Santos now demanded a cut of the profits too, as well as £2,500 up front, an agreement which ultimately brought about the end of the club’s overseas money-making exploits.

“We agreed a set figure of £2,500 with them, but when they came down they saw this huge crowd of 40,000-odd and realised they should have signed the same contract they did with Fulham,” explained former Plymouth Argyle Secretary Graham Little.

“I was with our directors 15 minutes before kick-off when we were called down and they said, ‘We are not going to play unless you give us another £2,500’. Well, we had no choice – there would have been a riot if we’d cancelled.”

Plymouth won the game 3-2, during which Pelé came to something of a gentleman's agreement with his marker, John Hore. “He had been kicked and chased his whole life and he just wanted a game of football,” said Hore. “At the end of the game he came up to me. We didn’t really understand each other, but he wanted to change shirts. I was glowing. I think it was because I didn’t kick him.”

But the lasting legacy of this encounter was the somewhat dodgy dealing that had gone on beforehand to ensure the fixture went ahead in front of a packed house at Home Park.

“We went to the Holiday Inn for a reception and our chairman Robert Daniel and I took the Santos president aside,” Little explained. “I had the money, £50 notes in cellophane packets and the chairman started telling the man from Santos: ‘This is crooked, we will report you. You will never play in this country again.’ He shrugged his shoulders and said: ‘Plenty more countries.’”

It’s generally accepted that Santos earned around $20million from their exploits in the 1960s and '70s but the golden goose was, by now, well and truly cooked. That tour of 1973 hadn’t just seen them visit England but also travel to the Persian Gulf, Sudan, Egypt, as well as France, Germany and Belgium too.

One of the greatest names in football had become the sporting equivalent of the Rolling Stones and, as a result, one of the best players ever was now reminiscent of a dancing bear, performing tricks for anyone who would throw him a few coins.

He had already played over 1,000 games for his beloved Santos and, as his contract came to an end, the club had now seen the opportunity to use the last 18 months at the club by lining their own pockets. A ruthless piece of business that Pelé was well aware of.

“My farewell on English soil was a sad one,” he later revealed in his autobiography. “The ‘footballing machine’ was losing its shine. Never in my life have I had my time so filled with airports, hotels and different countries. It seemed they were determined to get a few more hundred out of me before I went.”

DISCOVER THE STORY OF ANOTHER ONE OF BRAZIL'S FOOTBALL LEGENDS — JAIRZINHO