It was in 2012 when Gary Neville delivered his evisceration of David Luiz’s defensive skills as he claimed the Chelsea centre-back played, “as if controlled by a 10-year-old with a PlayStation”.

Although the quote hasn’t aged particularly well given Luiz’s improvement, it’s a metaphor that can easily be applied to Adama Traoré.

The Wolverhampton Wanderers winger is the real-life embodiment of the FIFA player who holds down the sprint button and goes on mazy and ridiculous dribbles whenever they get the ball. However, by the time they get into a good attacking position, the moment has often passed.

That may seem a trite unfair on Traoré – as it did Luiz six years ago – but the statistics certainly back it up. So much so, few players in world football are spoken about in as hushed tones as the Spanish winger – his dribbling numbers are simply otherworldly.

Since the start of the 2016/17 season there isn’t a player in any of the major leagues on the planet who have completed more successful take-ons than Traoré’s 434. Admittedly, Neymar is just behind the 22-year-old with 433 but there is a sizeable drop off before Lionel Messi in third with 404 and Eden Hazard fourth with 401.

Subsequently, his per 90 numbers are preposterous. In the same period of time with Middlesbrough and Wolves, Traoré’s averaged 8.62, compared to Neymar’s 6.0, Hazard’s 5.06 and Messi’s 4.51.

That’s almost double Messi’s output and there probably isn’t another player who  can boast that sort of a difference in an attacking metric when compared with the Argentine.

The interest in the analytics community is more than a little well-founded. Here is a player, predominantly on the fringes of teams, out-performing all of the best attacking players in the world. Albeit it’s in one discipline but a notable one all the same.

This season alone Traoré is averaging an incredible 11.07 take-ons per 90. And a reminder, these aren’t meaningless meanderings all over the field with no substance. These are successful dribbles i.e travelling from point A to point B while beating an opponent.

There’s reason to believe that would be difficult to perform on FIFA, let alone real life.

The issue for Traoré, of course, is what happens at the end of each dribble. Because across those two seasons he’s scored six times and registered 12 assists. Which, and you don’t need to know the numbers, is significantly less than the production of the aforementioned superstar trio.

It’s been a continual conundrum for his managers and a reason why he was so fondly regarded at La Masia but was allowed to move on in 2015. His lack of efficiency in the final third simply isn’t “the Barcelona way”.

But it presents a fascinating challenge for coaches and one Nuno Espírito Santo must be excited to tackle given Wolves broke their transfer record to sign Traoré for £18m from Boro this summer.

He’s been limited to five substitute appearances in black and amber, average just 26 minutes per game played. The ‘super sub’ role is an obvious fit for an attacker of such explosive quality who can have maximum impact late in games where legs are tired and structures not as solid as they were at kick-off.

It’s an understandable strategy but there must be a continual nagging question in Nuno’s head, especially given Wolves relatively poor performance in front of goal, what would happen if Traoré played from the start?

Certainly, if you take his output across the 131 minutes he demands inclusion: in terms of raw totals he’s already ranked second in the Premier League for take-ons with 16 and, perhaps surprisingly, 17th for open play key passes with seven.

Extrapolate that into per 90 averages and he’s essentially an elite attacker: 7.61 touches in the opposition box, 4.15 scoring attempts, 4.84 open play key passes, an xA of 1.13 and an xG of 0.44. In normal circumstances answers would be demanded as to why Nuno is leaving him out.

But the Portuguese is doing such a fine job so far and his team functioning as a collective, proving clever in midfield and fiendishly tough to break down, there is no reason to rock the boat. However, that six goals scored is a figure that could start to cause alarm soon.

Traoré is unlikely to take more chances than Raúl Jiménez or Léo Bonatini, who’s also yet to start, but his ability to suck defenders and break lines could certainly make life a little easier in the final third for the newly promoted side. 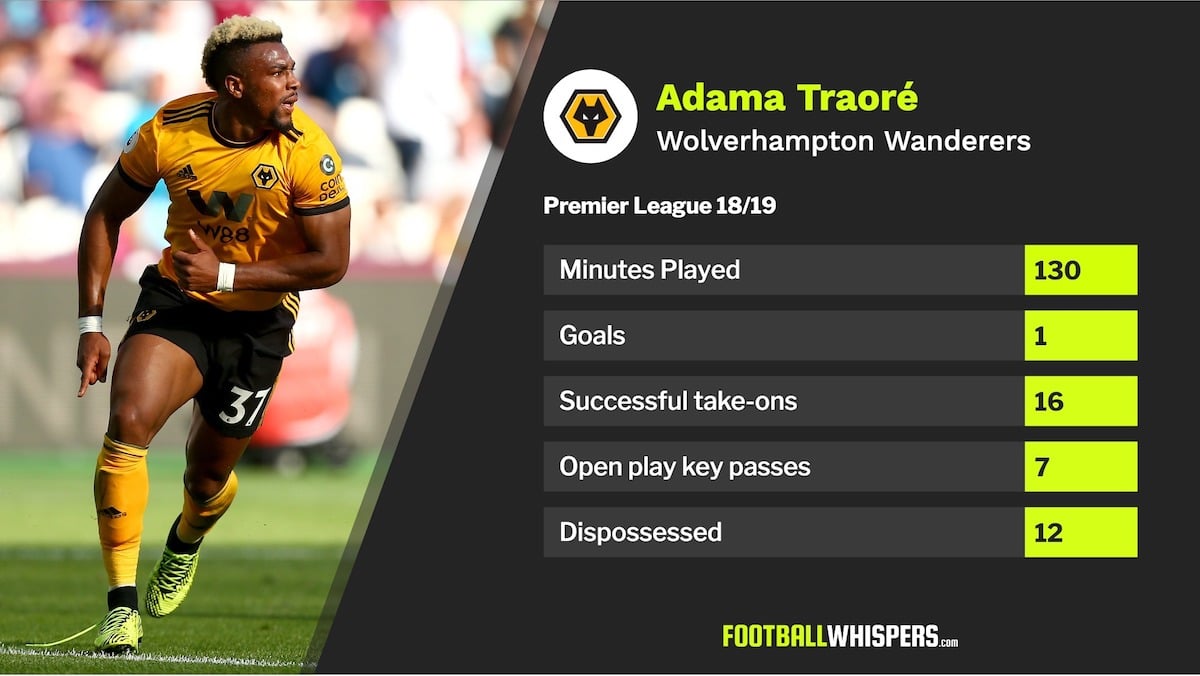 The red flag is that he’s been dispossessed 8.3 times per 90. Of course, given the amount of dribbles Traoré attempts, not all will come off. But in the Premier League, the stakes are just too high to lose possession on as many occasions.

The matter of where he would or could fit in also poses problems as Nuno has favoured a back-three with four in midfield and two playmakers behind Jiménez. Traoré’s lack of defensive game means the right wing-back is a no-no and Matt Doherty has been playing too well, anyway.

That leaves the option of replacing Hélder Costa or Diogo Jota as the men flanking Jimenez. In truth, both Portuguese have yet to make a telling impact, neither scoring or assisting in six starts while they have ten open play key passes between them and share the same xA (expected goals assists)  of 0.16.

Stacking Traoré’s offensive numbers up against that duo is almost an unfair fight but until the 22-year-old shows a greater appreciation for keeping the ball, his status as a super-sub will remain. There is greater scope for risk in minutes 75-90 than from the first whistle and as enticing a prospect he is as a starter, it’s perhaps too big a gamble at this stage of the season.