When Bolton Wanderers and Stoke City met in an FA Cup Sixth Round encounter in 1946, fans came from far and wide to see a clash between two giants of the English game. Tragically, what they did witness was to be the worst disaster ever to occur at a British football ground at the time.

The Burnden Park stadium disaster of March 9th would be the worst loss of life at an English football ground for almost four decades as thirty-three people died and around 400 were injured in a lethal crush at the then home of Bolton Wanderers.

A highly-anticipated encounter between Bolton and Stoke

These days, it’s hard to understand just what a huge game this was and why the tie attracted such attention, but Bolton Wanderers’ clash with Stoke City was a fixture that had it all; no wonder there was such a deadly clamour to see this highly-anticipated encounter.

Bolton had become FA Cup specialist before the outbreak of World War Two, having been victorious three times between 1923 and 1929, but in the years since had not progressed past the quarter finals. Meanwhile, Stoke had never got past the sixth round but did have Stanley Matthews in their ranks, a man widely seen as the greatest footballing talent of his generation.

Combine a hunger for the national game, which had been put on hold for much of the previous six years due to global conflict, Bolton being the only team playing in Lancashire that day and the fact that FA Cup ties were, at that time, played over two legs, and it’s easy to see why there was such a massive demand.

A ground too full

It’s never been confirmed just how many people were in attendance that day but estimates put the figure around 85,000 people, some 20,000 more than the ground was physically able to hold.

Despite the excitement surrounding the fixture the match wasn't an all-ticket affair and Bolton's highest gate that season had been just 43,453; but a football hungry public, the appearance of Matthews and the fact that Bolton already held a 2-0 first-leg lead meant there was, understandably, huge interest.

What made things worse was that everyone attending the game that day had to use the same turnstiles as parts of the ground were still closed having been used for wartime storage and were not yet in full use,  creating a huge bottleneck. 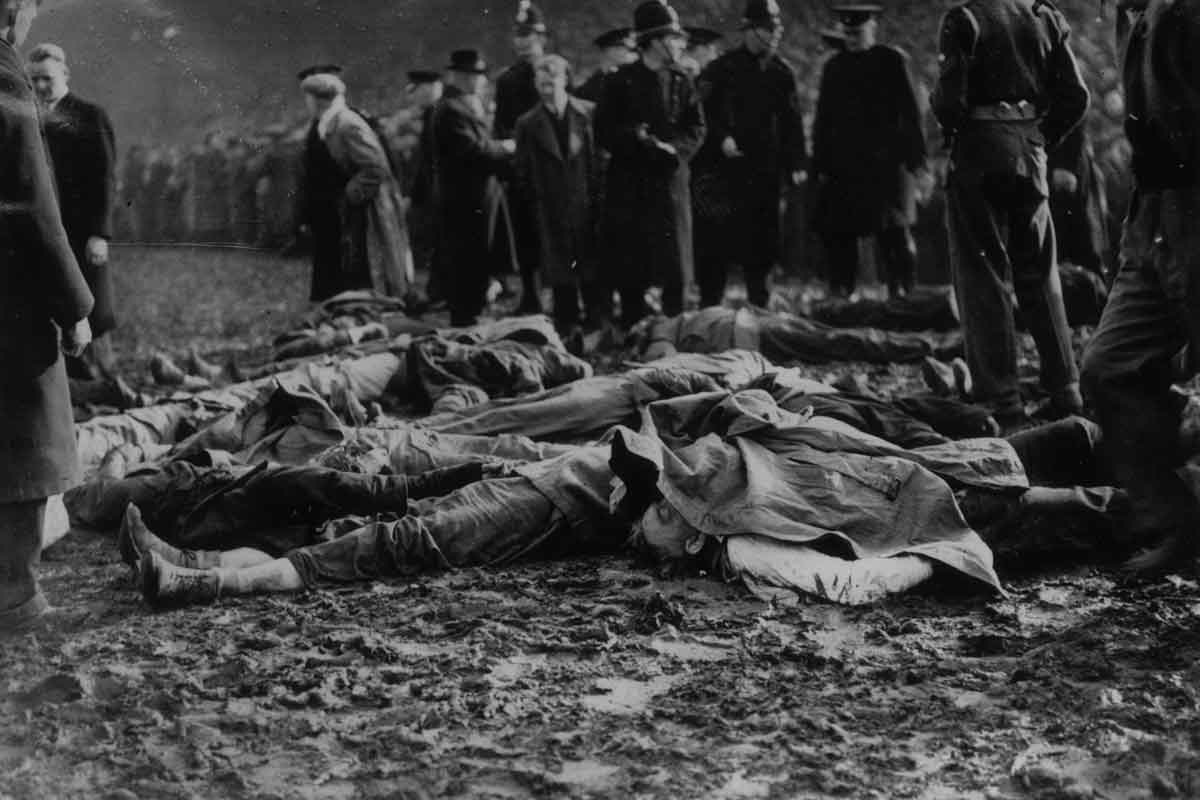 As kick-off approached the gates were shut as fans squeezed into the ground, but things got worse when a door at the rear of the stand was opened causing mayhem behind the goal at the far end. Alf Ashworth could see problems developing from his vantage point at the other end of the ground.“To the left of the goals there was a mass of faces and no spaces, while farther over it was evident that there was room, but people couldn't move over to the Burnden side of the ground.” he said later.

Some claimed the gate was forced open by fans who were locked out trying to get in, while others argue that those inside the stadium opened the gate looking for an escape from the insufferable crush that was developing around them. Either way, as the game kicked-off several barriers gave way at the Embankment End and the huge crowd fell forward on top of each other like a row of dominoes.

Phyllis Robb was among those caught in the devastating crush and had to be lifted to safety and passed over the heads of the rest of the fans while those around her struggled for their lives. “I was not scared of the crush,” the 101-year-old later told the BBC: “I was more bothered about my father because he was still on the ground.”

Bill Cheeseman was another who was on that embankment with his sister, who was excited to see Stanley Matthews in the flesh. “It was such a crush,” he recalled. “It was getting dangerous. We were getting squeezed by the people in front and behind. Everyone was pushing. All of a sudden, those that were in front of us seemed to go – all falling down like a pack of cards. We managed to get out and I was glad about that.”

Initially, the majority of those in the ground were completely unaware of the tragedy that was unfolding as fans scrambling onto the pitch. At that time, fans being lifted out of tightly packed terraces were a common sight during the early stages of football games.

But Alf Ashworth was still able to see just what was happening before him despite being at the other end of the ground. “People were being carried away on stretchers, some of them had their arms dangling over the side, and I thought they looked dead.” 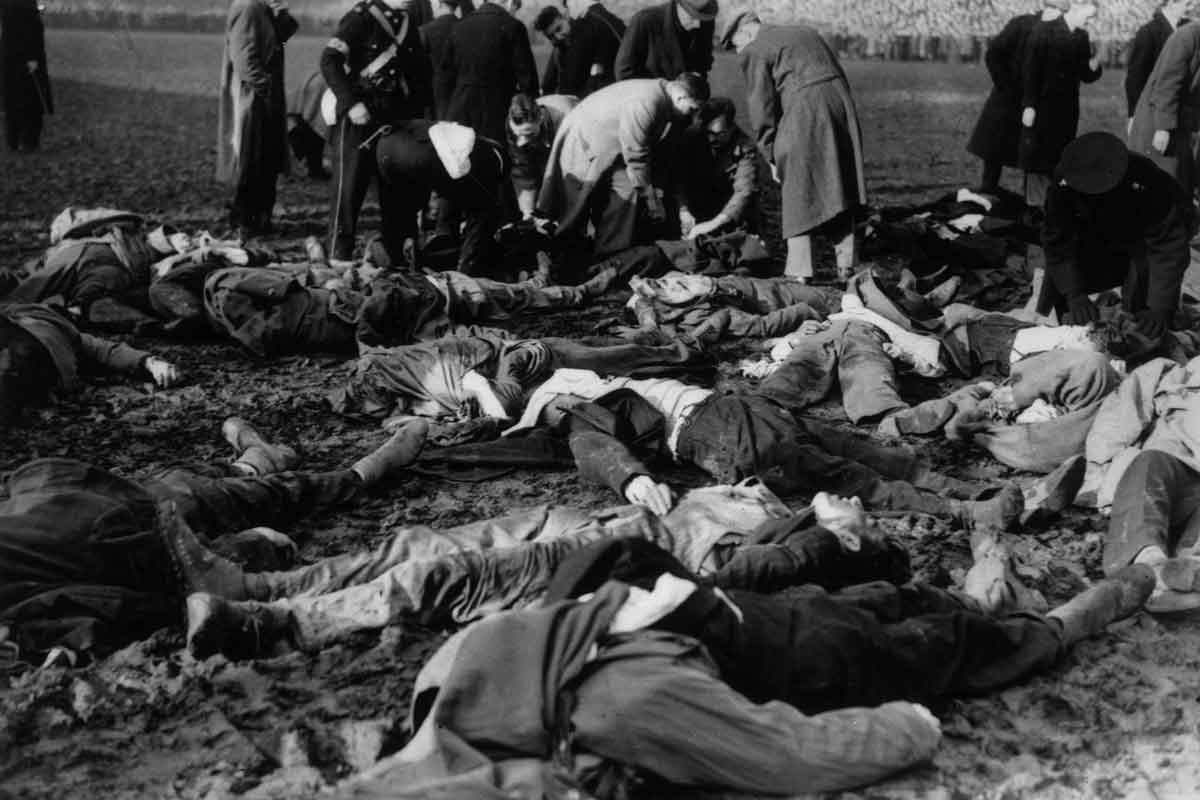 Incredibly, despite the game being halted temporarily, play soon continued as a gripping cup tie that thousands had wanted to see was played-out as people lay dead and dying on the side of the pitch.

Eventually a police officer ran onto the pitch to alert the referee, who took the sides off the field at 3.12pm but half an hour later, on police instruction, the match restarted with a new touchline that had been drawn out using sawdust.

Beyond the hastily arranged new playing area bodies lay on makeshift stretchers, covered with coats or whatever other garments could be found to maintain their dignity. At halftime the players simply swapped ends and kicked off again, no team-talk was needed at a time like this and not surprisingly the game ended 0-0.

The sheer fact that such events could happen at a British football stadium are unthinkable now and that a blind eye could be turned to the tragedy that was unfolding as the game continued to be played, but Bolton Club historian Simon Marland feels that it wasn’t as simple as that.

“These days the game would be abandoned and that would be the end of it,” he says “But I think again, communication, probably 80 per cent of the crowd in the ground at that time didn't know what was going on.”

The extent of the disaster wasn’t lost on the players either who were put in the impossible position of having to complete a fixture with the tragedy unfolding just yards away.

The man who many of that crowd that day had turned up to see, Stanley Matthews, later wrote that news had only reached the dressing room about the growing casualty list after the game. “It wasn’t until I was motoring home that evening that the shadow of grim disaster descended on me like a storm cloud,” he later wrote.

They say that time is a great healer but many still believe that the events of Burnden Park on March 9 1946 have been forgotten by those in the game, remembered by only those who witnessed them in person or were directly affected.

Some were determined that it would never be forgotten, however, including Sylvia Hibbert, whose father attended the game having just come home from the war. “He looked wealthier than he'd ever looked in his life but when he didn't come home at night my mother wasn't concerned, she just thought he'd gone for a drink,” she told the BBC.

In the years that followed her mother campaigned long and hard for a memorial to remember the victims and mark the tragedy. A plaque was eventually placed at Burnden Park in 1992 before the old stadium was finally demolished in 2000 to make way for a new Asda store with the memorial also being moved to a new home.

As always with such tragedies, the subsequent investigation led to measures being brought in to prevent something similar ever happening again; including the introduction of new, mechanical turnstiles and a recommendation that all grounds should have better communication systems in the event of a disaster.

But as is so often the case these changes were very much a case of too little, too late and did nothing to prevent the deaths of 33 men women and children that awful afternoon, not to mention subsequent disasters which took place at British football grounds in the years that followed.

As survivor Alf Ashworth put it so simply on the 70th anniversary of the tragedy in 2016: “Who would have thought that going to a football match would result in such a tragedy?”

Now read: How did Don Revie become the forgotten man of English football?