Ligue 1 has been a popular market for Newcastle United in recent times and the Magpies, along with Premier League rivals Southampton, are keen to raid the French top flight once more.

According to various reports the pair are both interested in snapping up Toulouse central defender Christopher Jullien.

The 25-year-old defender has made a name for himself as an impressive defender in a not-so-competent Toulouse side and could be available this summer at a very reasonable price.

We've run the rule over the Southampton and Newcastle transfer target to see what all the fuss is about.

Who is Christopher Jullien?

The French defender had a rather disgruntled start to his playing career, when at the age of nine he failed to make it in to the famed Clairefontaine youth academy and instead joined nearby Parisian club US Torcy.

After leaving the club just one year before Paul Pogba would walk through the door, Jullien then opted to join Auxerre where he then spent six years initially playing for the Ligue 1 side’s youth team before being promoted to the first team.

In 2013 Jullien was called up to the French national team to take part in the Under-20 World Cup in Turkey. After winning the tournament with his country, the young defender was courted by Bundesliga side Freiburg and opted to make the move to Germany at just 20 years of age.

Unfortunately, German football didn’t work out for Jullien and after a long spell in the club’s second team and a season on loan at Dijon he decided to return to French football when an offer came in from Toulouse in 2016.

Since then the defender has been a mainstay of Les Violets, earning praise as a leading central defender in the division. And after two years finding his feet back in French football the 25-year-old may finally be ready for another adventure.

What are Jullien's main strengths?

Despite Toulouse conceding 54 goals in 38 games as they stumbled down the Ligue 1 table to ultimately finish in the relegation play-off spot, Jullien still showcased plenty of his talent as a central defender.

Throughout the league campaign he averaged 6.46 aerial duels per game, which isn’t particularly poor or impressive. However, success rate for those headers stands at 76 per cent – which is the very best in the league.

Using his ability to win duels in the air naturally makes the defender a big threat from set pieces too. As we saw in the first leg of the relegation play-off clash with Ajaccio, Jullien always manages to find space in the box from corners of free kicks. 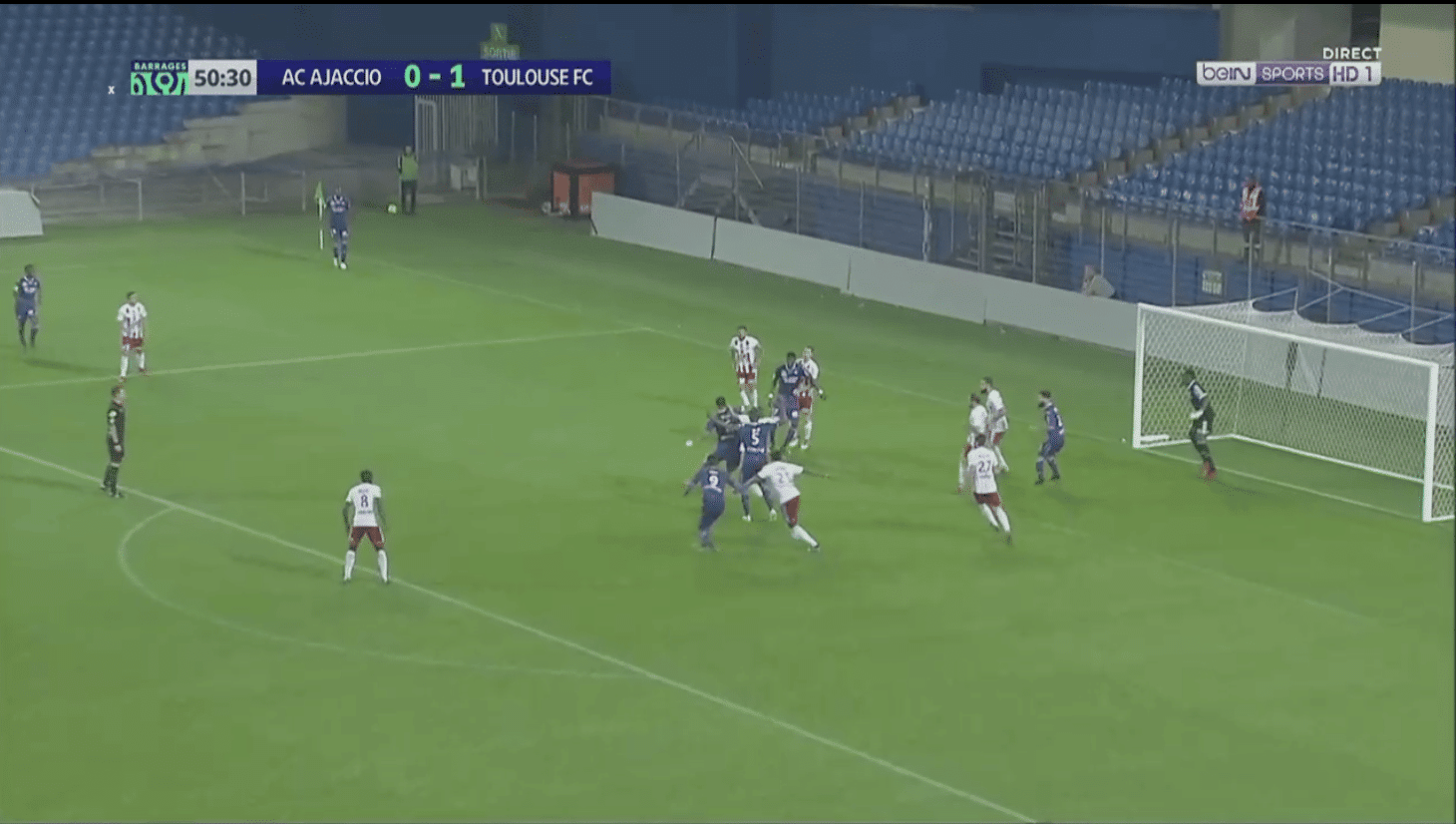 In the image above, we see the defender running towards the front post to knock the ball in with his left foot. Which is even more impressive when we consider the composure to do so and the fact that his game is built around knocking the ball in to the back of the net with his head. 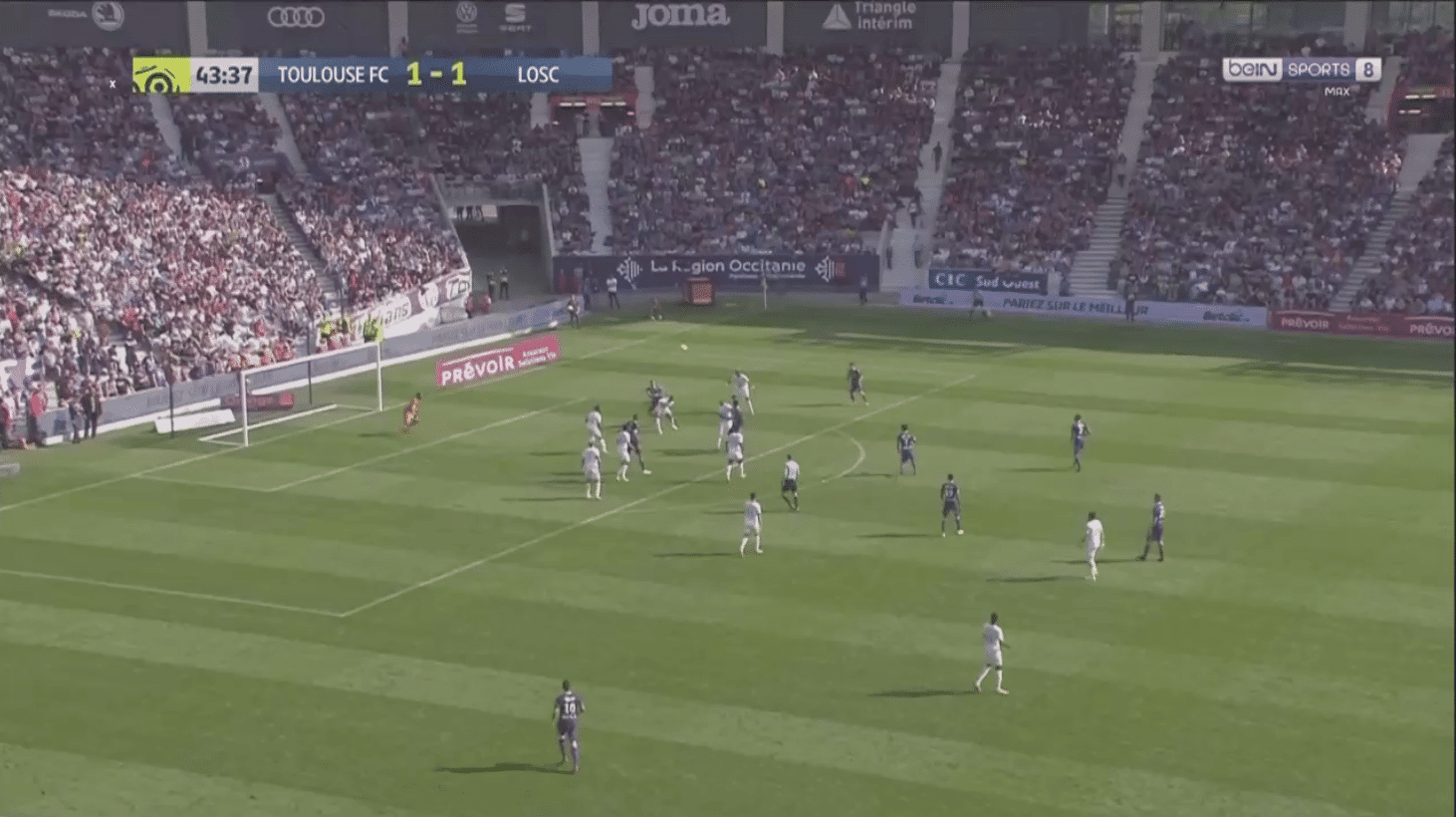 The defender was on hand to showcase his particular eye for goal in a 3-2 defeat to Lille earlier in the year when a set piece was initially cleared only for the second ball in to find Jullien running in at the back post to tap home the goal. As we can see, as his team-mate heads the ball the defender is already peeling away from his marker.

Indeed, over the course of just two years at the club the central defender has found his name on the scoreboard on seven occasions. And in this season alone he ranked highest among Ligue 1 defenders for expected goals, picking up a figure of 3.63. If you’re looking for a goalscoring central defender in French football then you’ll struggle to find one better than Jullien.

What are Jullien's main weakenesses?

For all of of Jullien’s impressive attributes in the opposing box, he can at times look rather clumsy. Jullien came nowhere near the top of Ligue 1’s interceptions table and throughout the course of the last season he suffered a number of lapses in concentration. 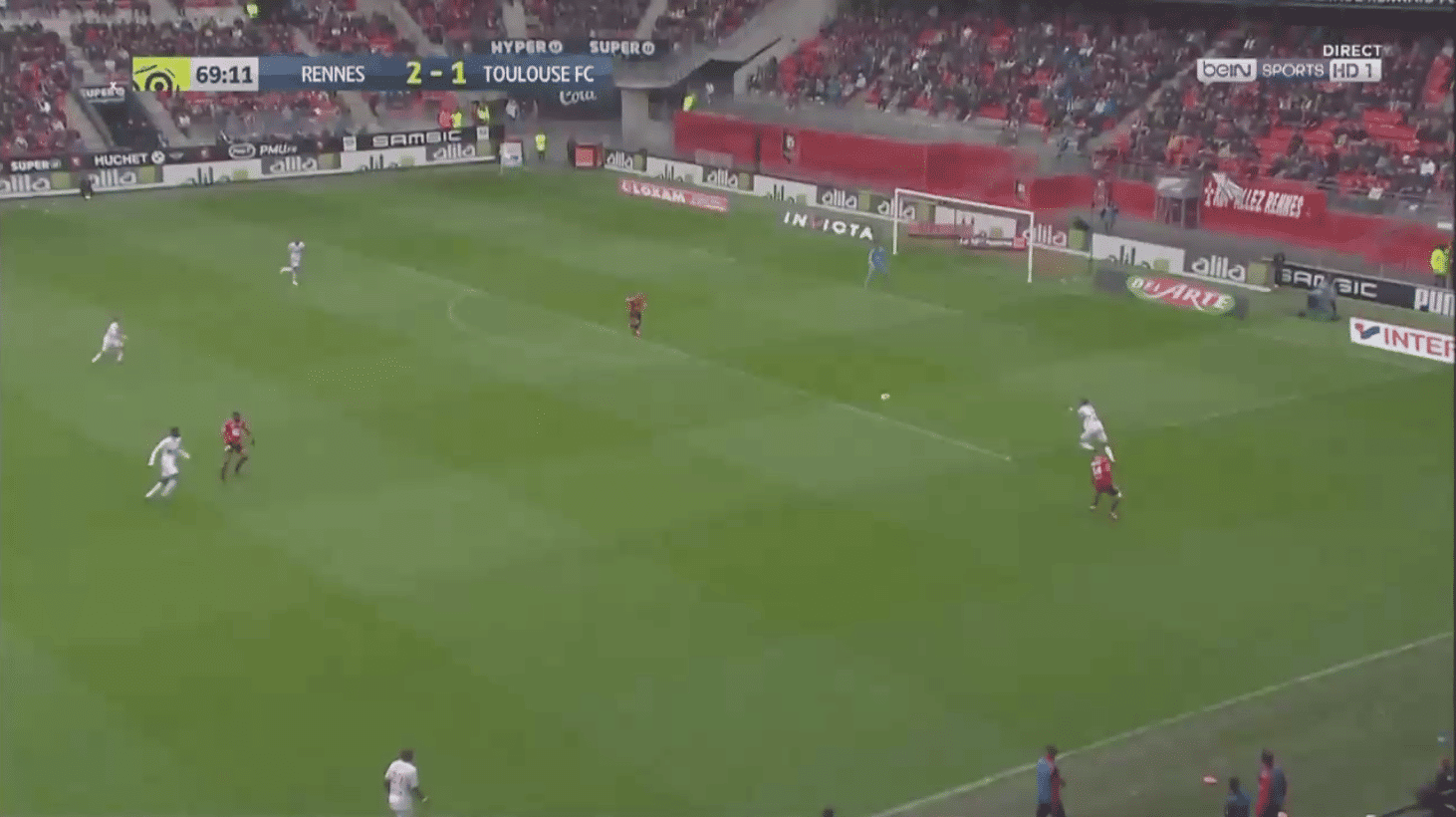 The most recent one of these circumstances came in a 2-1 defeat to Rennes in April. In the image above Jullien’s had just received a short pass from the goalkeeper but somehow managed to allow his long pass up the park to hit the forward in front of him, who then passed it inside to the unmarked striker. 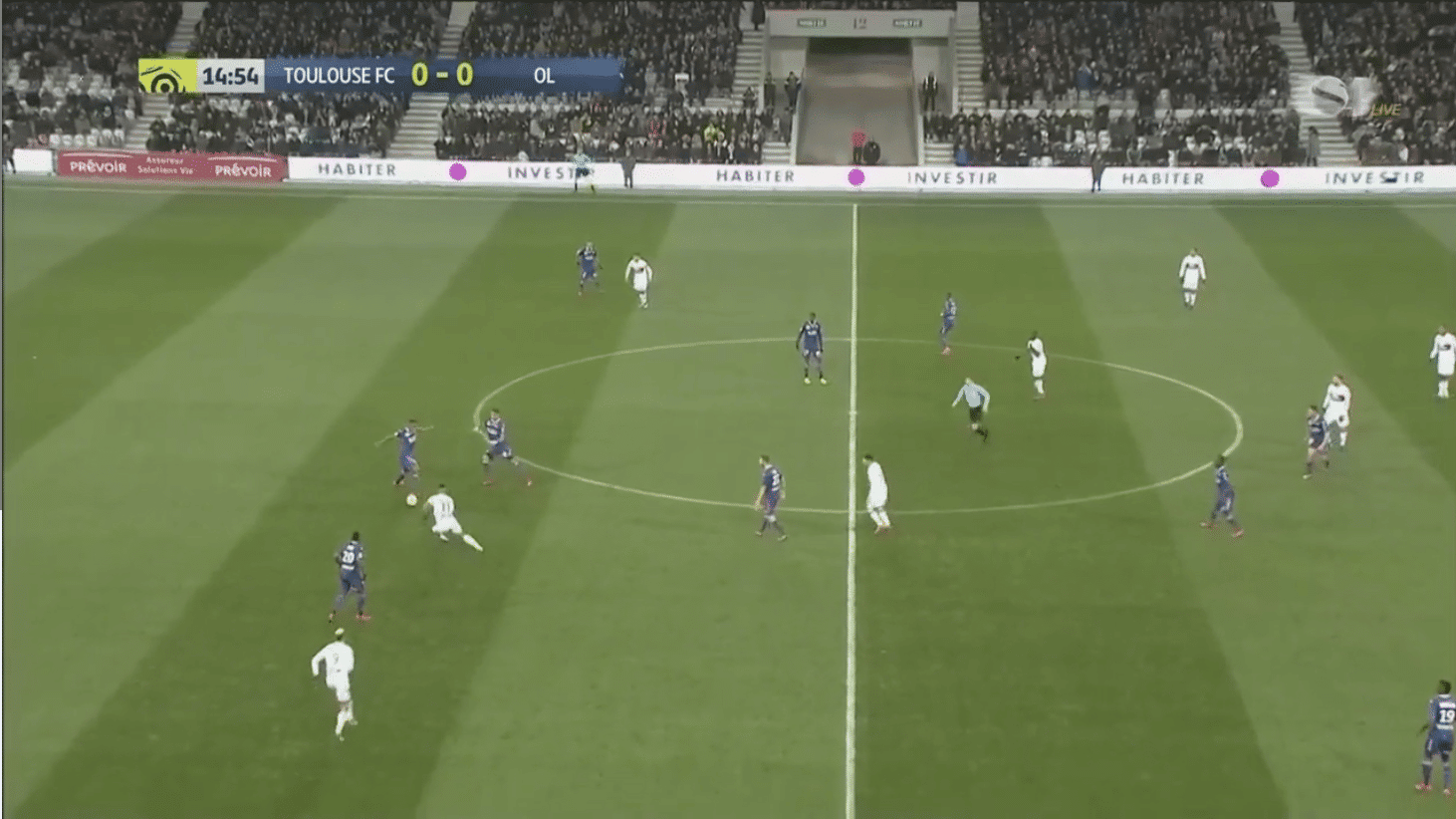 Similarly, in a 2-1 defeat to Lyon in December Jullien should have intercepted and controlled a perfectly comfortable loose ball in the middle of the park but he wasn’t paying attention, allowing the forward to snatch it from under his feet and run through on goal largely unopposed. Although the striker didn’t score, it was yet another example of how this central defender in question can be very sloppy. 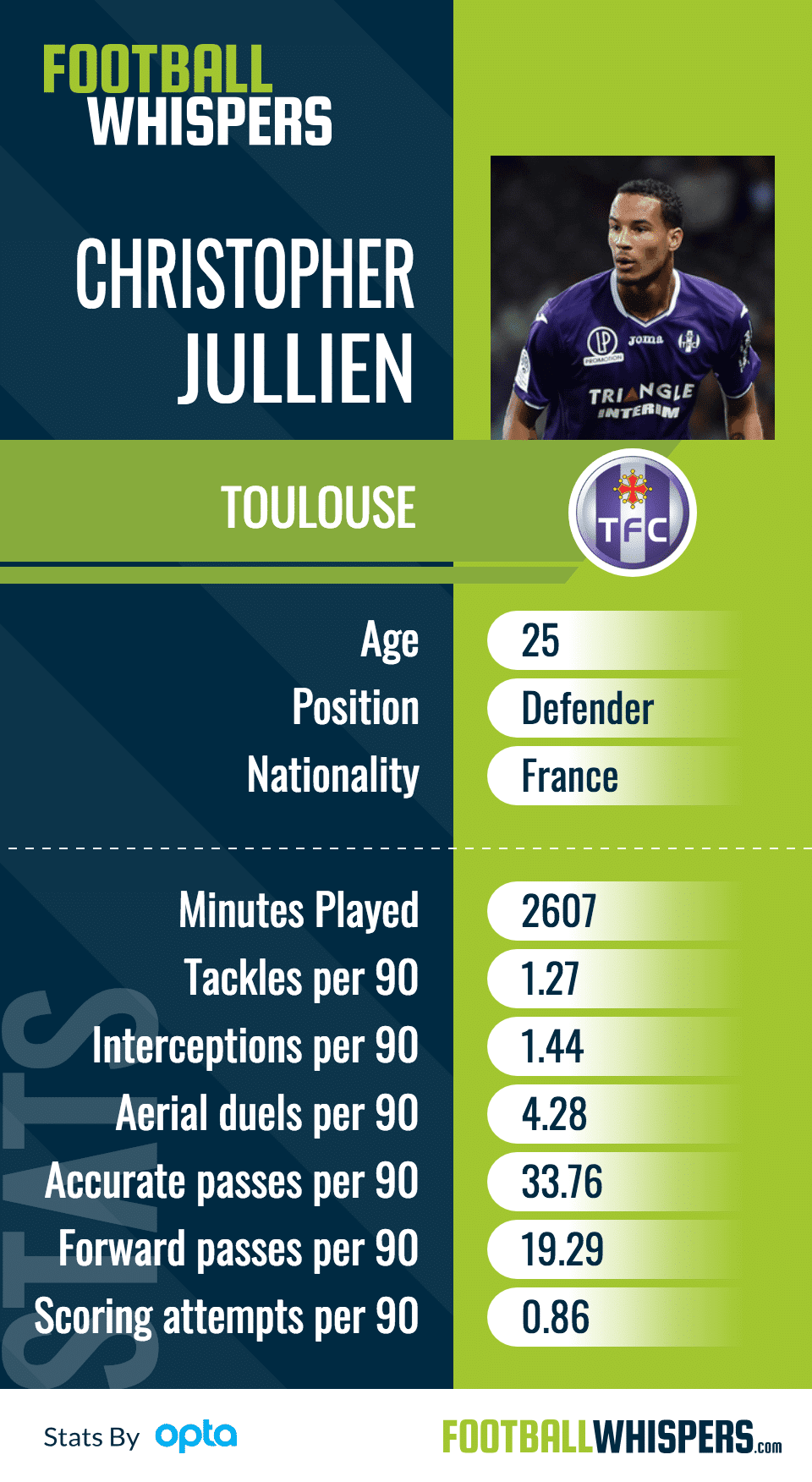 How much would Jullien cost?

Although Toulouse only just managed to avoid relegation last season, the French club have often made the most of the transfer window when English or other European clubs come calling for one of their key players.

Last season Martin Braithwaite moved to Middlesbrough for around £10million and the season before that saw Wissam Ben Yedder complete a switch to Sevilla for a similar sum.

Reports in England claim that Jullien’s value has “soared” to £9million after an impressive season with Toulouse and considering the current market rate that probably isn’t too far off what Newcastle or Southampton would be willing to spend.

For both Premier League clubs the decision to sign Jullien or not will undoubtedly revolve around how well he would perform in the English top division.

Ligue 1 is a fast-paced league which is why players tend to adapt so well when they cross the channel. However, in Jullien there is a defender who may find his lapses in concentration increase when the quality of opposition takes a steep hike.

Newcastle signed centre-back Florian Lejeune 12 months ago and will be relying upon captain Jamaal Lascelles – reportedly a Chelsea transfer target – next season too. At this moment both of those players are probably far more reliable than anything Jullien could bring to the club.

Similarly, Southampton spent the best part of £20million on signing central defensive pairing Wesley Hoedt and Jan Bednarek last summer. And at 25 Jullien is not someone who could be considered a prospect.