The FA Cup may be a competition increasingly derided for its significance in the age of Premier and Champions League billions, but Tottenham‘s defeat to Manchester United in the semi-final has led to a series of questions being asked about Mauricio Pochettino’s tenure as manager.

Not that there is any genuine doubt or uncertainty cast over the Argentine’s position but nearly four years into an extremely promising and productive project,Spurs will once again finish a season trophy-less; with an eighth-straight FA Cup semi-final defeat an unfortunate indicator that old habits sometimes do die hard.

Pochettino had all-but eradicated the clichéd ‘Spursy’ characterisation as soft southerners who play nice football but with little substance, with the former Espanyol and Southampton coach raising expectations in north London significantly.

However, while anticipation of success may be a degree higher, a fresh glass ceiling has been constructed and as the 2-1 loss to United and performance over the 90 minutes highlighted, concern as to how they go about cracking it remains.

That worry is exacerbated by the fear that, like the early 2010s vintage of Gareth Bale and Luka Modric, that should silverware continue to prove evasive, crown jewels like Harry Kane, Christian Eriksen and Pochettino may start to get itchy feet.

Spurs experienced a relatively quiet summer in the transfer market last year.Davison Sánchez was signed from

Even the hullabaloo over Kyle Walker’s British record departure died down as quickly as it erupted with Spurs choosing to replace him with the talented but tempestuous Serge Aurier and bank a net profit of £27m.

Danny Rose backpage moaning aside, Pochettino was instead left in peace to focus on improving what he already had, especially in an attacking sense.

But it’s that full-back area when, in assessing the regular Spurs XI, which looks the most in need of a tweak and that is not intended to be a slight on Walker and Rose’s replacements, Kieran Trippier and Ben Davies who have both enjoyed very good seasons individually.

Trippier has enjoyed arguably the best campaign of his career and is a genuine candidate to start for England at the World Cup in Russia, while Davies has been a model of consistency and has produced a career-high six assists.

Aurier has been a permanent mercurial state, ranging from inspiration to frustration but, at 25, still has time and talent to grow into English football and his season lacks the consistency in appearances to properly truly assess.

But it’s become increasingly apparent is that none have possessed the attributes of Walker and Rose which would make this Tottenham such an expansive attacking team, capable of working their way through the most stubborn of defences.

It was evident against United that Jose Mourinho was determined to flood the central midfield area and essentially double-team either Eriksen or Mousa Dembélé, depending who was the focus in possession.

It was an approach that proved fruitful with Dembele losing the ball five times over the course of the game, three times in his own half; one such occasion leading to Alexis Sanchez’s first-half equaliser.

Eriksen claimed the assist for Dele Alli’s opener but in the second-half as United sharpened their tactics and tightened the vice around the Dane he had little space to operate in and found few passing lanes in front or either side of him, forcing the playmaker to regularly shift the ball sideways.

Trippier and Davies are both good crossers of the ball and do get forward to support the midfield but what they do not do is force the issue and make an opposition defence focus on their attacking play. 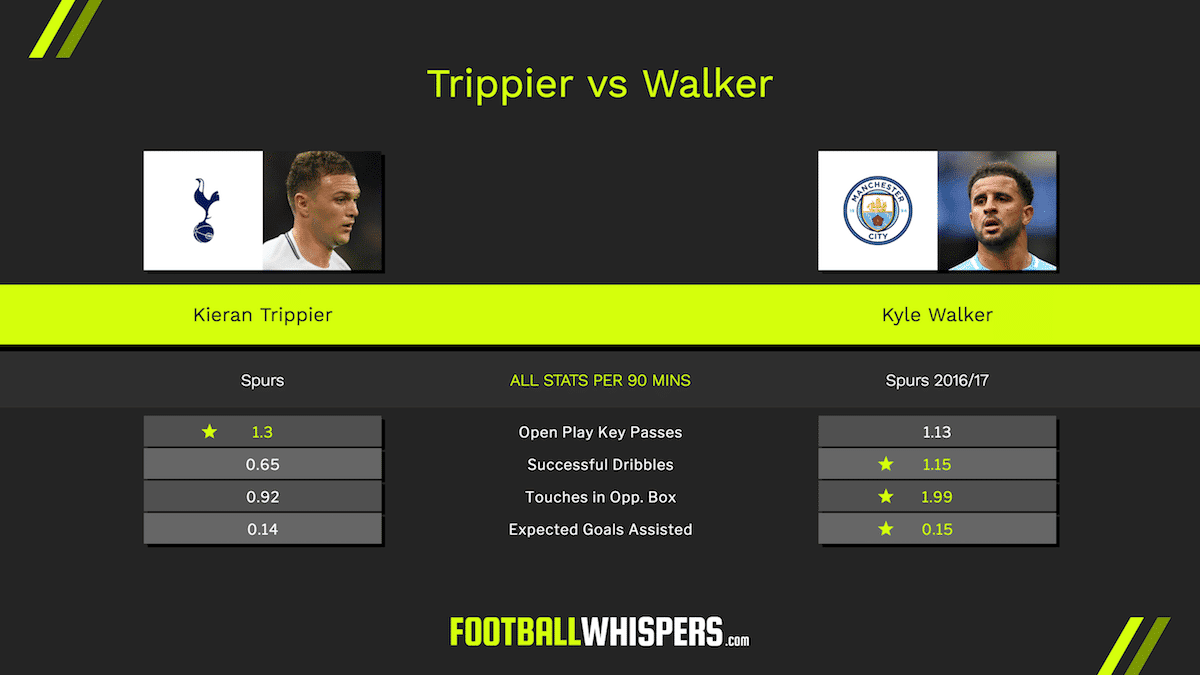 In creativity terms, they have done little wrong. Davies (1.17 open play key passes per 90) and Trippier (1.3) are in the club’s top five in terms of fashioning chances for their team-mates in the Premier League, against Walker (1.13) and Rose (1.23) from last season.

It’s highlighted by the average touches per 90 in the opposition penalty area. Walker (1.99) and Rose (2.05) of last season were more troubling figures for the opposition than Trippier (0.92) and Davies (1.59) of this season. 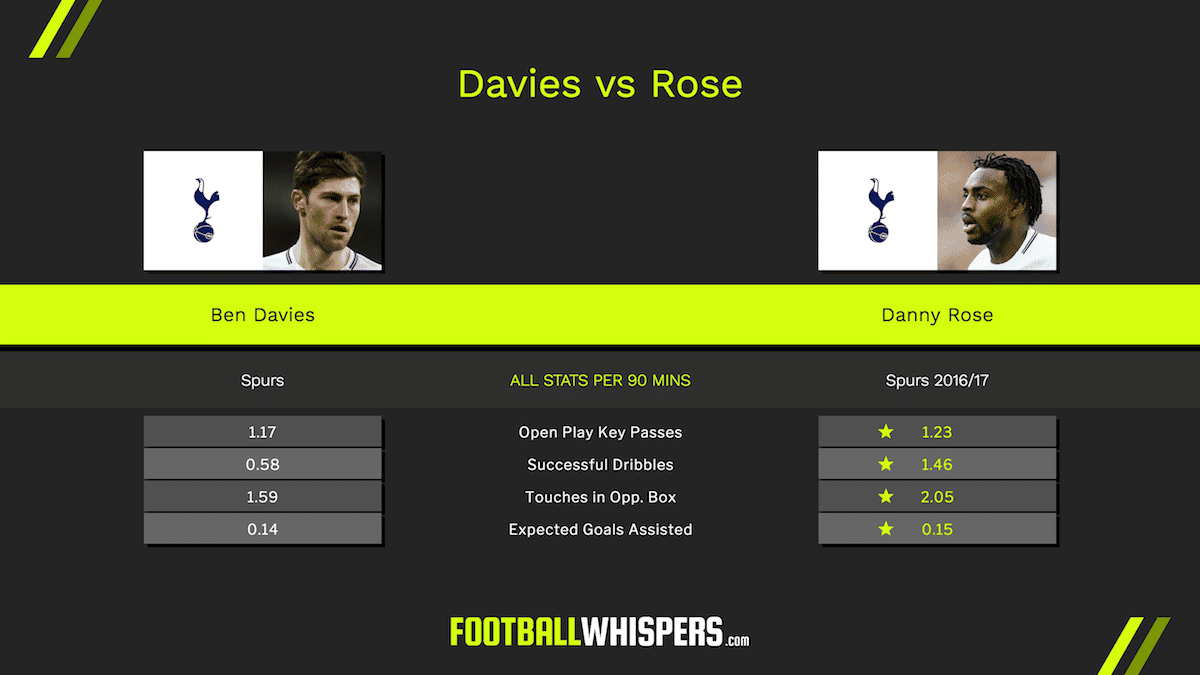 Not that each time Walker and Rose got the ball they went on a goal-fashioning gallop through defences, but when players dribble and beat players they not only take defenders out of the game, they create space for their team-mates. They make them better.

Davies, more so than Trippier, tends to cross after receiving a pass from a team-mate rather than fashioning the opportunity for himself. So are their impressive key pass numbers a result of the work of others, as opposed to being a genuine signifier of their own offensive abilities?

It’s difficult to provide an exact answer, but what was clear on Saturday was that United were content to let Trippier and Davies have the ball in threatening areas. Trippier made 17 touches in the final 25 yards and Davies eight. Neither fashioned a key pass across the 90.

It’s hypothetical but you can’t imagine Mourinho ignoring Walker or Rose in the same manner.

There is a caveat to this, particularly against the ‘touches in the opposition box’ number. Pochettino largely deployed Walker and Rose as wing-backs whereas Trippier and Davies have flitted between being wide of a back three or in a more traditional four-man defence. A possible counter being, is that because their manager doesn’t trust them to have enough of an impact in an attacking sense?

However, the subsequent effect of all this is that teams can concentrate their defensive schemes in neutralising Tottenham’s main attacking threats: Kane (step forward Chris Smalling), Eriksen’s vision and passing angles plus Dembele’s ability to break the lines and create chaos in your midfield shape.

Tottenham are still undoubtedly an excellent side and should secure a top-four place which, given their overall history – particularly in the Premier League – is cause for celebration in itself. Especially as they remain modest spenders among England’s elite.

But with Arsenal at last rebooting, a new manager likely at Chelsea and Roman Abramovich expected to lavish him with millions to spend, they cannot afford to stand still for too long.

Trippier and Davies have done fine jobs in ensuring Walker and Rose, albeit largely of his own creation, haven’t been missed too much but to make that jump into ensuring they are credible trophy hunters, adding greater dynamism in the full/wing-back area has to be a serious consideration.