Tottenham needs a win or they are probably out of the Conference League! But what kind of chance for victory does the team actually have?

Our team of experts is here to help all of those who need fresh ideas for the upcoming game with these in-depth predictions. For more expert Conference League picks, please visit our dedicated page.

The first game between the two clubs resulted in a 2:2 draw in France. The clearly better side was Rennes. Rennes is in the 1st position in Group G of the Conference League and rightfully so considering the amazing performances the team is showing. Tottenham has not been impressing at all with the recent performances – 2 losses, 1 draw, and 3 victories in the last 6 games, 2 of which were narrow victories.

The first game between the two clubs had both sides scoring 2 goals each. This here is the last game of Group G and both sides are going for the victory so we are expecting goals yet again. Tottenham’s last 5 games resulted in 3 games having both teams score at least 1 goal. Rennes took part in 3 such games as well.

In the last 5 games that Rennes played, 3 resulted in 3 or more goals being scored. The style of the club is very attacking and goal chances are always there. Meanwhile, Tottenham’s last 5 games also had 3 that had a lot of goals in them. Antonio Conte is going to rely on his best players for qualification to the next round and he will spare no expense to complete his goal.

Déjà vu for the teams

Tottenham and Rennes will bring more of the same this Thursday to Tottenham Hotspur Stadium. Rennes already secured the 1st position in Group G but Tottenham has to win in order to qualify for the next round. This doesn’t mean that Rennes will underestimate this game. Tottenham isn’t in a great place right now as well. The amazing start of the season was followed by a downfall for the team and it is too early to say that the club is out of the woods yet.

Head-to-head data for the Tottenham vs Rennes game

Those are the key head-to-head statistics and odds for the Tottenham vs Rennes match:

Common questions for the Tottenham vs Rennes game: 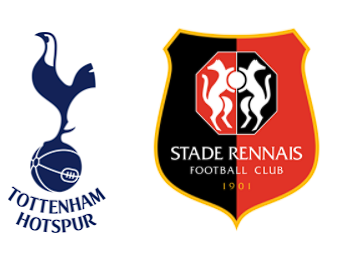